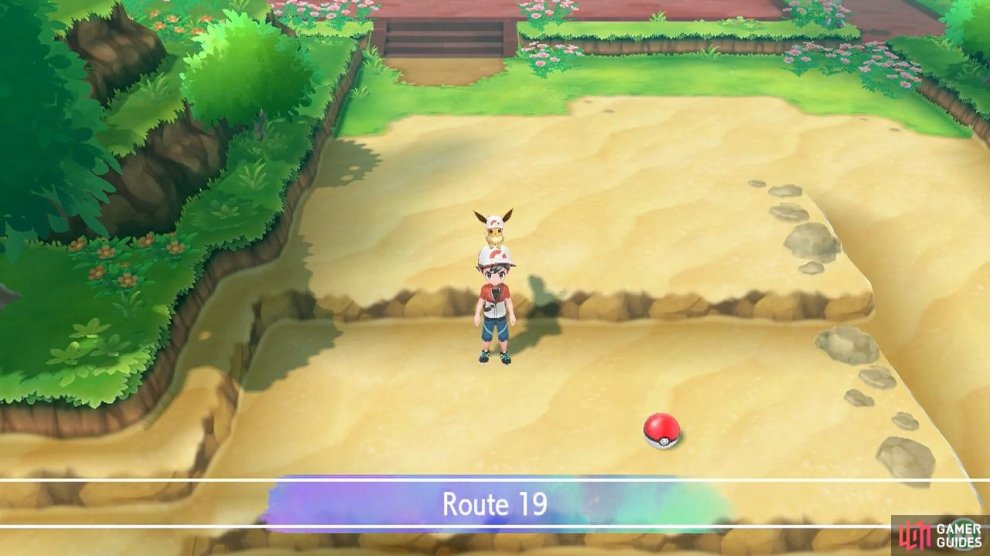 To reach the next Gym on Cinnabar Island, there are two routes that you can take. This is one of them–and probably the route that most trainers will go through. You can reach here by heading south from Fuchsia City. The first time you enter, you’ll bump into Jessie and James by the entrance and get the Gold Teeth from them.

If you haven’t done so, return the Gold Teeth to the Warden who lives along the east side of Fuchsia City to learn Strong Push. Similarly, if you haven’t learned Sea Skim yet, go and find the man with the Lapras in the Playful Park area, towards the north of Fuchsia City. You’ll need both of these techniques where we’re going.

As you arrive on Route 19, there’s a bunch of ledges along the left side and a simpler path along the right side. Follow the ledges. After jumping over the first ledge, you can grab a Full Heal towards the right. Below, be mindful of a trainer to the far right. You can avoid him if you head left while hugging the ledges.

Unlike most Swimmers, Reece has a Dragon-type Pokémon. If this is your first time fighting one, they’re weak to Ice, Dragon and Fairy. Fairy-types are ideal since they’re immune to Dragon moves, of which this Dratini has quite a few. Otherwise, it’s unevolved so not a major threat.

Below Reece is a second Swimmer towards the left, who looks around in various directions.

Richard has an evolved Staryu just like Misty. This starfish is weak to Grass, Electric, Bug, Ghost and Dark. For attacks, it can use STAB Surf and Psychic. Plus Minimize to raise its evasion. If it uses Minimize, you can use never-miss moves like Swift, or Body Slam or Stomp to bypass the effect.

South from here is the open sea. Use Sea Skim to continue traveling on the water. To begin with, you want to head in a south-westerly direction. A fair distance south, there’s a female swimmer towards the right.

When using Sea Skim, you can instead ride on Lapras or Gyarados by taking them out of their Poké Ball (from the Party menu). Also, you can’t trigger Co-op when swimming on the water. So you can’t "cheat" and get help when battling trainers or catching wild Pokémon.

If you haven’t caught on, Grass and Electric-types are going to be your major players here. Since you’re going to find nothing but Swimmers and their Water-types for a while. Although Grass-types do need to be cautious of Ice and Poison-types. 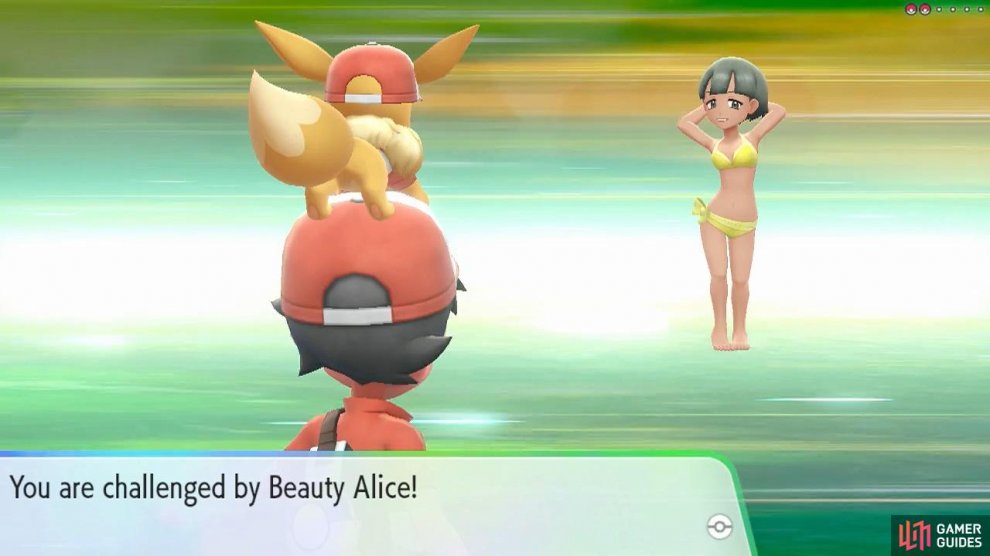 Golduck is an evolved Psyduck that wants to be a Psychic-type, but isn’t one. It can use Scald for STAB damage and to potentially inflict burn, plus Psybeam to hurt Poison-types etc. and Yawn to induce Sleep on the next turn. Scare it with Grass or Electric-types.

Cloyster is an evolved Shellder that has gained the Ice-types. It’s weak to Grass, Electric, Rock and Fighting. It also has dismal Special Defence, so special attacks will be very damaging. This one knows Ice Shard, to try and attack first, and Spike Cannon, which deals multiple hits.

Next, there’s another swimming trainer a short distance south-west from Alice.

This is the middle evolution of Poliwag. It can use Bubble Beam for STAB damage, Low Kick to hurt Ice, Dark-types etc. and Body Slam to potentially cause Paralyse. Grass-types are ideal, but it’s not even in its final form, so you can easily outpower it.

Moving on, you can carry on south-west from Axle if you want to reach the next route. Or you can go south-east to meet another trainer.

David’s two Seel both know Aqua Jet and Ice Shard–two moves that generally go first. Meanwhile, his Seadra has a powerful Hydro Pump, plus Dragon Pulse for when it evolves–in the next game, maybe. None of these are particularly threatening, but a Grass-type to resist Hydro Pump would be nice.

If you went towards David, head south–and then after a while, south-west from his position. You should run into a female swimmer near the south of the route.

Another Seel that knows Aqua Jet and Ice Shard. To refresh your memory, these are both priority moves. Next up, Seaking is an evolved Goldeen. This one has a formidable STAB Waterfall. Plus Quick Attack to catch weakened Pokémon off-guard. A Grass-type would be great here.

After getting to know Anya, head over to the female swimmer north-west from here, right near the end of this route.

Connie has a Water-type Eevee evolution. It can use Surf for STAB damage, Aurora Beam to try and counter Grass-types, and Quick Attack to attack first. It is quite resistant to special attacks, so pelt it with super-effective and/or physical attacks.

Now if you head west from Connie or David nearer the north, you’ll reach Route 20. Hang on, we’re only just getting started!

Naturally, there’s a lot of seabound Pokémon here. Common ones include Tentacool, Staryu and Magikarp (in case you didn’t buy one outside Mt. Moon). Then you’ve got the evolved forms: Tentacruel and Starmie. If you’re really lucky, you can catch Lapras as a rare spawn.