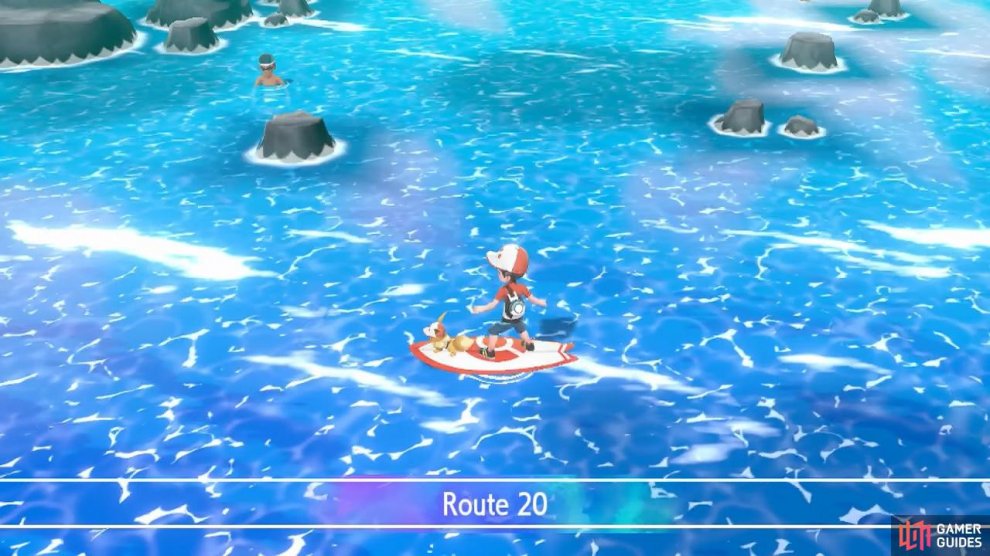 This route leads directly to Cinnabar Island, but to get there, you'll need to cross through Seafoam Islands in the middle. As soon as you come from Route 19, there's a male swimmer towards the north, right near the rocks that form the boundary.

Gyarados is an evolved Magikarp and a threatening Pokémon. It's weak to Rock and exceptionally weak to Electric. Rock-types are weak to Water though, so be careful. It can attack using Waterfall for STAB, Crunch to hurt Psychics and Ghosts, and Dragon Pulse for other purposes.

Next, there's another male swimmer a short distance west, about halfway along the route.

Darrin's Golduck knows Surf and Psybeam. It can also use Disable to stop you using a previous move. Meanwhile his Gyarados has Waterfall, Crunch and Outrage--the latter is a powerful Dragon move that makes the user confused after a while. Field an Electric-type if possible.

After that, keep swimming west. There won't be much to see for a while. But eventually, there should be a female swimmer near the north side of the route.

Wartortle is the middle evolution of Squirtle. This one can use STAB Bubble Beam, plus Protect to waste your moves. Next up, Starmie can use Psywave to deal from between 20 to 61 damage. For reference, it's weak to Grass, Electric, Bug, Ghost and Dark.

From there, you'll reach Seafoam Islands if you continue west for just a little longer. Upon landing, head over to the west side of the island. You should reach a cave entrance.

To the left of the cave, there's a Poké Mart clerk who will heal your Pokémon for free. Now that's what we call great marketing!

If you think you're ready, head on inside the cave.

More or less the same Pokémon as Route 19. Well, the two routes are right next to each other. But since this route is situated further out into the ocean, you can occasionally run into wild Gyarados--and, by golly, are they a frightful sight to behold!