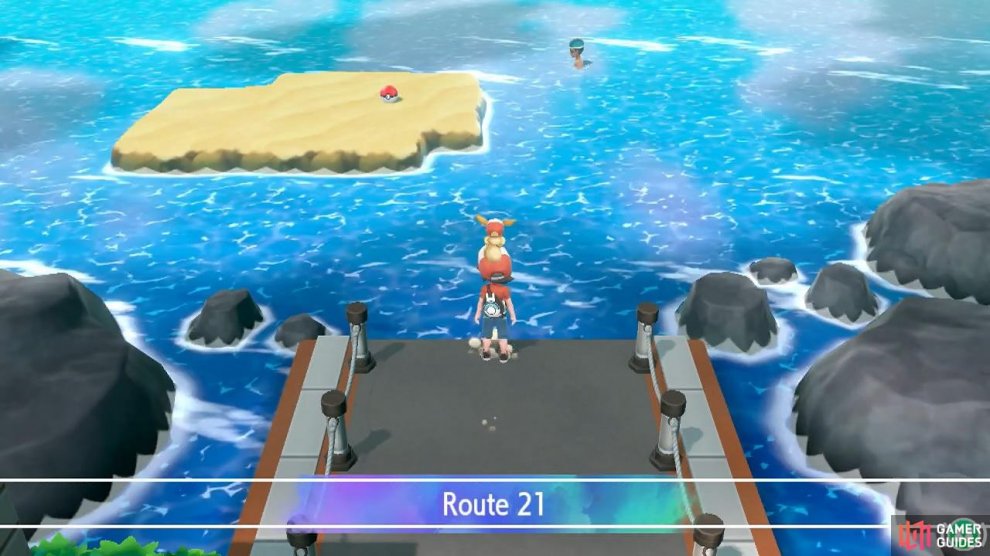 This sea route connects Cinnabar Island with Pallet Town. It's actually the quickest way to reach Cinnabar Island as well--and we make use of this route when looking for a Dark-type Pokémon to fight Sabrina with. Anyway, if you want to explore this route in full, we recommend starting from the Cinnabar Island side. Otherwise, you'll have to follow this guide backwards.

When you enter this route, use Sea Skim from the edge of the pier. Just up ahead, there's an island towards the left and a trainer nearby to its north-east. Jump on the island and reclaim the PP Up. Then head north past the trainer. If you want, you can go around him or wait till he's looking away.

An evolved Slowpoke. Like its unevolved form, it's weak to Grass, Electric, Bug, Ghost and Dark. For attacks, it can use STAB Surf and Confusion--only the former registers as a threat. It can also use Rest to sleep and regain HP, and Disable to stop you using a move. Try to focus on special attacks.

North from here is an island with nothing on it. But things aren't always as they seem. Land on this island and search near the right side to find 7 bags of Stardust hidden in the sand. Next, jump back into the water from the north side. Towards the left, there's a Swimmer you can fight.

Starmie shares the same Type combination as Slowbro, so it has the same weaknesses: Grass, Electric, Bug, Ghost and Dark. It knows Surf and Psychic--both are pretty strong and are boosted by STAB. Plus it can use Minimize to boost evasion.

Next is Kingler, an evolved Krabby. This one is a lot more straightforward since it's a pure Water-type. For attacks, it can slam you with a STAB Crabhammer or literally slam you with a Normal-type Slam. Grass-types are ideal.

In any case, head over to the next island that's north-east from here. If you're feeling productive, go over and chat to the Sailor who's standing on the eastern edge, staring out into the ocean.

Right, so this is a Fighting-type Sailor, not a Water-type one. His Primeape can use Low Kick to batter heavy Pokémon, U-Turn to damage Psychics and switch out, and Screech to lower Defence. Use Flying or Fairy-types if possible.

Next is Machoke, which is the middle evolution of Machop. This brute can use a variety of Fighting-type moves, plus Bulk Up to boost its Attack and Defence stats. Flying, Psychic and Fairy-types are all good here. Ghost-types will take no damage.

Leap back into the sea and travel towards the next island that's nearby to the north-west. Here, there's a Fisherman minding his own business, and a Water Stone near the top-left corner.

Tentacruel is an evolved Tentacool. It's still weak to Electric, Ground and Psychic. For attacks, it can use STAB Surf and Sludge Bomb. We've gone through Starmie already. This one only uses Hydro Pump, so a Grass-type would be great here.

From the Fisherman's island, start heading north-east towards the next island that's slightly further away. As you begin to move out, there's a Swimmer towards the far right. 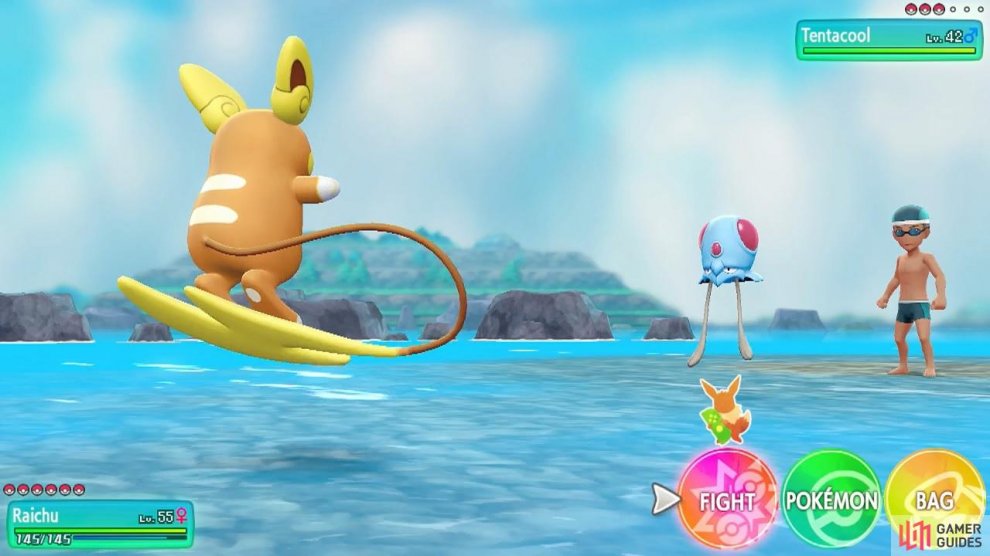 An easy Tentacool to begin with. Although it does know STAB Surf and Poison Jab. If you've forgotten, it's weak to Electric, Ground and Psychic. One super-effective hit can probably shut it down.

Next can be Golduck, an evolved Psyduck. It's a pure Water-type, so you shouldn't need us to tell you what to do. This one can use STAB Surf, plus Psybeam to hurt Poison-types etc.

Finally, we have an evolved Tentacool. Just in case, it shares the same weaknesses as Tentacool. Jack's Tentacruel only has Water-type moves, so that's one less thing to worry about.

As you're just about to reach the next island, you may notice another Swimmer towards the far left.

Two Water-types that aren't really menacing. Spencer's Seel can use Aqua Jet and Ice Shard--both priority moves that tend to go first. Next, his Seadra can use STAB Waterfall, and Dragon Pulse. Grass and Electric-types are the way to go.

If you're bored, land on the island where the Roughneck is, and then introduce yourself.

This Raticate loves to use Sucker Punch and Quick Attack, which can go before your attacks. Feel free to smack it in the face with a Fighting-type. Next is Onix, which is weak to Ground, Fighting and Steel, and massively weak to Grass and Water.

Moving on, continue north. Towards the left, there's an island with a Fisherman and Coach Trainer.

Ronald starts off fairly easy with an evolved Horsea. This one does carry a powerful Hydro Pump, so Grass-types are recommended. Next is Gyarados. This beast can use Waterfall, Crunch and Outrage. An Electric-type is highly recommended. Otherwise, you'll have to be resourceful. 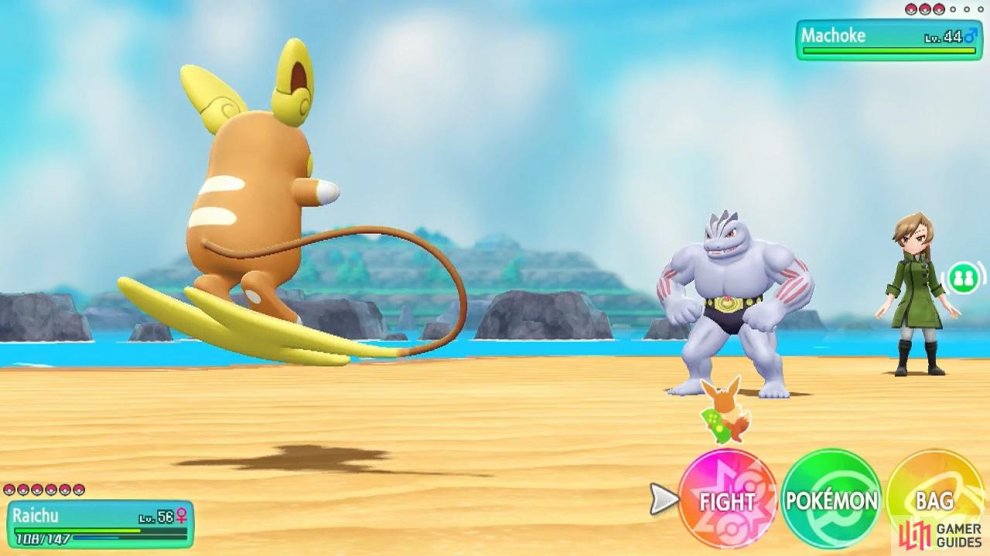 All of Pam's Pokémon know Ice Punch. First is Machoke, which also knows Brick Break. Flying-types are ill-advised, but Psychic and Fairy are still good.

Next is Jynx, which can use Body Slam, and Lovely Kiss to cause Sleep. Since it's an Ice-type, it gains STAB when using Ice Punch, so be careful. Hit it with Fire, Steel, Ghost or Dark-types.

Finally, Kangaskhan can use Dizzy Punch, which has a good chance of causing confusion. If you're concerned, you could field a Ghost-type and use non-Ghost moves. For example, Gengar can fight back with Sludge Bomb.

Survive Pam's chilly punches and she'll give you TM35 Ice Punch. Finally, to the north-east from here is a small island. Here, there's a Fisherman and a Hyper Potion near him.

Oh boy, this is the moment you've been waiting for! The legendary Fisherman who has an entire party of Magikarp. They're all pathetic, so do what you must. But imagine if he had just trained them one Level and evolved them all. Then you might've been scared!

Further north, there's a stretch of land towards the right hand side, with a bunch of tall grass. Meanwhile, if you follow the river to the very end, you'll reach Pallet Town.

There's nothing new in the sea, but there are some new Pokémon in the tall grass just outside Pallet Town. Of note, there's Tangela, a pure Grass-type. You can also bump into Vileplume (Let's Go Pikachu) or Victreebel (Let's Go Eevee) if you are extremely lucky.