Having acquired all 8 of the Kanto Gym badges, you're ready for your final challenge: the Pokémon League. But first, you need to get there. From Viridian City, head west to Route 22. Perhaps you've been here before. After you go past the first patch of tall grass, you'll run into your rival again. This time, he means business! 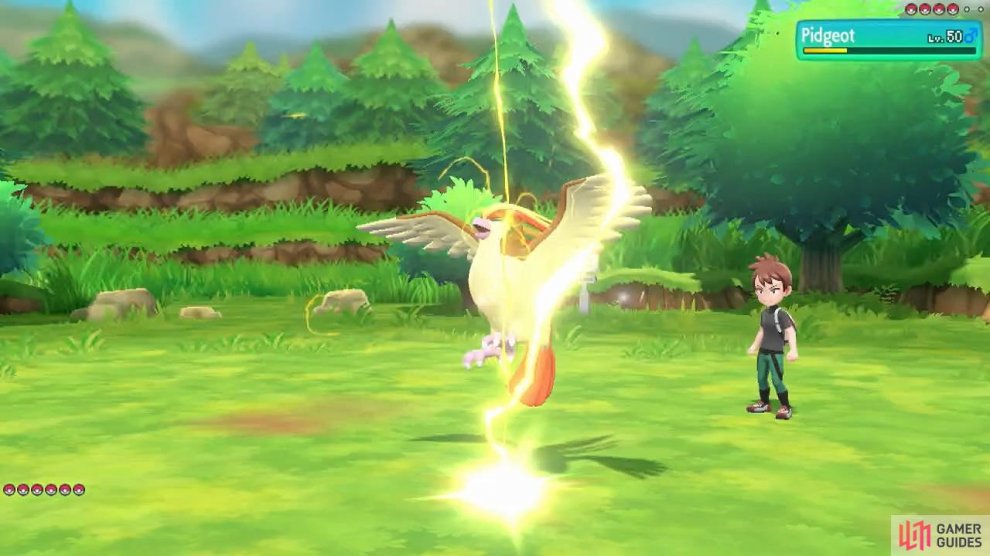 Now when was the last time you battled your rival again? Anyway, he's finally evolved his Pidgey into Pidgeot. As always, it's weak to Electric, Rock and Ice. For attacks, it can use Air Slash for STAB, Quick Attack to go first, and Roost to restore its HP.

Next up can be Vileplume, which is a fully evolved Oddish. It has the same Type combination as always, so it's weak to Fire, Ice, Flying and Psychic. This one can use Petal Dance to inflict heavy STAB damage, but causes confusion to itself, and Toxic to cause deadly Poison.

Marowak is an evolved Cubone. It's still a pure Ground-type, so you don't need to think too hard. For attacks, it knows Bonemerang, which is a two-hit Ground-type attack, and Thrash, which is Petal Dance but Normal-type. Plus Swords Dance to boost Attack.

Finally, your rival has his Jolteon in Let's Go Pikachu. This Electric Eevee has incredibly Speed, so watch your step. It can unleash a powerful STAB Thunder, but with so-so accuracy. Plus it has Double Kick and Pin Missile for variety, and Quick Attack to go first. Use a Ground-type if possible.

Alternatively, your rival will use his Raichu in Let's Go Eevee. This evolved Pikachu is a bit more balanced, which can work in your favour. It too can use Thunder, but it also carries Thunder Punch, for added reliability. Like Jolteon, a Ground-type is strongly recommended.

After defeating your rival, he'll run on ahead. Continue west to the end of this route, then enter the gatehouse that leads to Route 23. Inside, you can only go through if you have the Boulder Badge from Brock. There will be seven more gatekeepers after this, so keep your badge collection somewhere close by!