These Pokémon trainers--named after the primary colours--may not seem familiar at first, but they have a long history with the Pokémon franchise, and are among the strongest trainers in the entire Pokémon world.

Green is a brand new character to the Pokémon video games, although she first appeared in one of the Pokémon comics. Like Red, she doesn't show up in the main story. After capturing Mewtwo in the Cerulean Cave, you'll bump into your Rival outside the entrance, and he'll talk about a strange girl entering the cave.

If you go back to the spot where you battled and caught Mewtwo, at the deepest part of the Cerulean Cave, you'll run into Green. Speak to her and she'll battle you there and then. 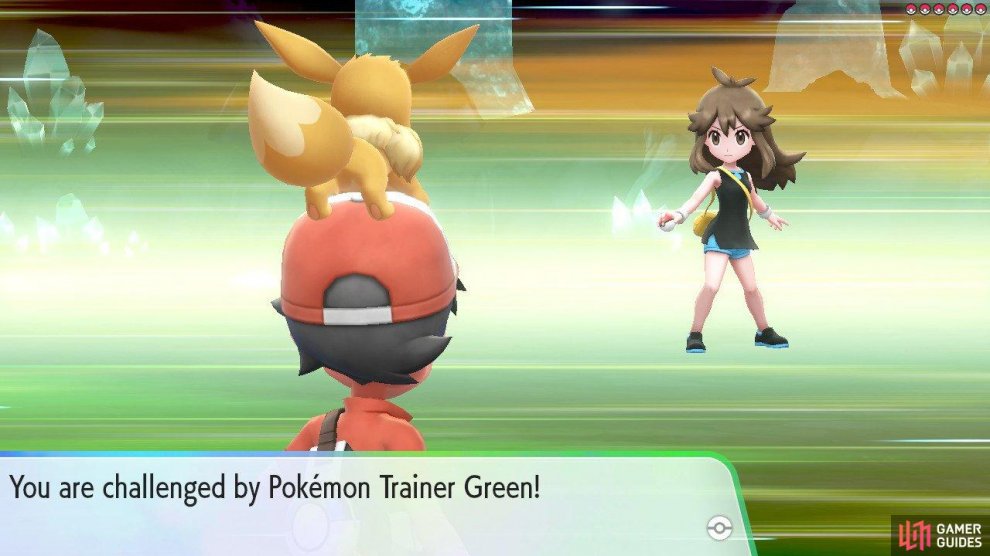 Green begins the battle with her Clefairy. This one can use Moonblast for STAB, Tri Attack to potentially inflict a status condition, and Reflect or Light Screen to weaken your attacks. A Steel-type would be wonderful here, or a Poison-type.

Next up can be Ninetales. Green's Ninetales focuses on offense, with Fire Blast for STAB, Dark Pulse to potentially cause flinch, Foul Play to hurt physical powerhouses, and Hyper Beam to do some surprising damage. Water and Rock-types are perfect, but be wary if Clefable put up Reflect or Light Screen beforehand.

Victreebel can use Power Whip and Poison Jab to deal decent STAB damage, Sucker Punch to try and attack first if you're readying an attacking move, and Leech Life to steal HP and hurt Psychics. Fire and Flying-types are among the best offensive choices, while Steel-types are great for walling.

Moving on, we have the ever-tricky Gengar. Green's Gengar can use Shadow Ball and Sludge Bomb for STAB, Will-O-Wisp to inflict a burn, and Dark Pulse to try make your Pokémon flinch. Ground-types are technically the best choice, but they're liable to get crippled by Will-O-Wisp. Still, it's fairly fragile, so just do your best.

Kangaskhan can use Dizzy Punch to deal STAB damage, with a chance of causing confusion. It's also carrying Sucker Punch, Thunder Punch, plus Brick Break to smash your own Reflect, Light Screen etc. As you might expect, Fighting-types are ideal here. Ghost-types are a great defensive choice as well.

Finally, Green has a Mega Evolved Pokémon. Her Mega Blastoise can use Fake Out to cause a flinch on the first turn, Hydro Pump for a beefy STAB hit, and Ice Beam to wreck Grass-types. That said, your own Mega Venusaur can probably outlast it, especially if it knows Mega Drain. Otherwise prioritise Electric-types.

Succeed in fending off Green and she'll reluctantly hand you Mewtwo's Mega Stones. These will allow you to Mega Evolve Mewtwo into its X and Y forms, similar to Charizard. In addition, she'll leave 5 Poké Balls on the floor, if you want to pick them up or something...

Afterwards, each time you defeat the Pokémon League, she'll re-appear below the lamppost to the right of the cycling store in Cerulean City. Speak to her and you can fight her team again. You don't get anything new for winning, besides the usual experience and money. Plus it's kind of fun to tease her.

Next, you should be pretty familiar with Blue, since he appeared multiple times in the story. In case you weren't aware, he was the original rival in Pokémon Red, Blue and Yellow--and the very first Champion too. In this timeline, he played more of a supporting role, but as it would happen, the timelines have started to converge.

If you revisit the endpoint of the Viridian City Gym, you'll find that Blue has taken over the Gym, similar to in Pokémon Gold, Silver and Crystal (and the remakes). Speak to him and he'll battle you as the Gym Leader, in Giovanni's place. 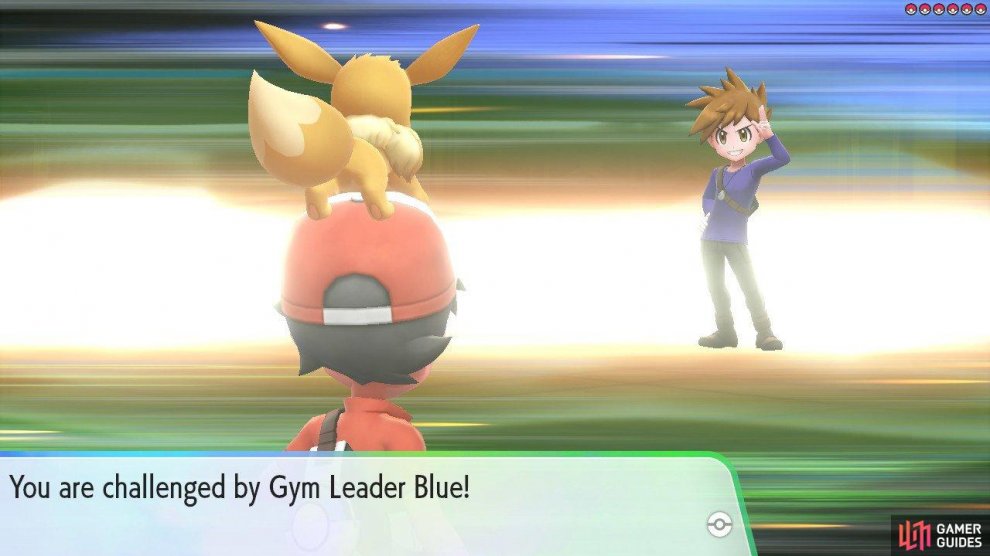 First into the arena is Tauros. This raging bull can use Double Edge for some impressive STAB damage, Earthquake to punish Rock and Steel-types, Rock Slide to potentially flinch, and Iron Tail to smack Fairies etc. If you have one, a Fighting-type would be brilliant.

Next, Blue may bring out his Gyarados. This fearsome sea monster can use Waterfall for STAB, Earthquake to mangle Electric-types, Crunch to chomp into Psychics and Ghosts, and Outrage to deal neutral damage to most foes. An Electric-type would be very welcome here, but keep Earthquake in mind.

Exeggutor can use Power Whip and Psychic for STAB, Stomp to punish users of Minimize, and Light Screen to protect its party from special attacks. Bug-types will have a field day here, providing they're not weak to Psychic. Otherwise, Fire, Flying and Dark are safe and reliable choices.

Aerodactyl is a difficult beast to tame. This one can use Rock Slide for STAB and to potentially flinch, Earthquake to hurt Electric-types, plus Iron Tail and Crunch. It's exceptionally fast and hits pretty hard, so take that into account. A healthy Water-type would be a great asset here.

Blue's Alakazam can use Psychic for STAB, Dazzling Gleam to wound Dark-types, Foul Play to punish physical powerhouses, and Reflect to protect its team from physical attacks. Like Aerodactyl, Alakazam is fast and hits hard, but it's fragile. Despite Dazzling Gleam, Dark-types are advisable. Otherwise, hit it with a non-weak special attacker.

Finally, Blue has a Mega Evolved monster just like Green. His Mega Charizard Y can use Fire Blast and Air Slash for STAB, Dragon Pulse to deal neutral damage to most targets, and Hyper Beam for burst damage. Rock-types will send it reeling, while Water and Electric-types should also perform well.

After defeating Blue, you won't get anything new, besides the usual experience and money--and a sense of accomplishment. Like the other Gym Leaders, you can challenge him again during each new day.

Last but certainly not least, we have Red who was the original protagonist of Pokémon Red, Blue and Yellow. He last made a re-appearance in (Ultra) Sun and Moon, together with his old chum, Blue. Although Red doesn't feature in this game's story, it is possible to meet--and battle--him.

First, you must defeat (or be acknowledged by) at least 6 Master Trainers. It doesn't matter which, so long as they're all different. We recommend defeating the Master Trainer that corresponds with your partner (so Pikachu or Eevee) and going from there. For more help, please check the Master Trainers page that we'll be adding later.

After meeting that criteria, Red will be hanging around to the left of the entrance to the Pokémon League atop the Indigo Plateau. He can be a bit hard to see because of the pillars on both sides of the steps. Speak to him with 6 Pokémon in your party and you'll have the option to battle him. He's the strongest trainer in the game, so be prepared!

The battle with Red follows the same rules as Master Trainer battles. So you cannot use items, and you may choose "Run" to forfeit the battle. Losing does not deduct any money; conversely, you get nothing for winning, besides a title and a sense of pride. 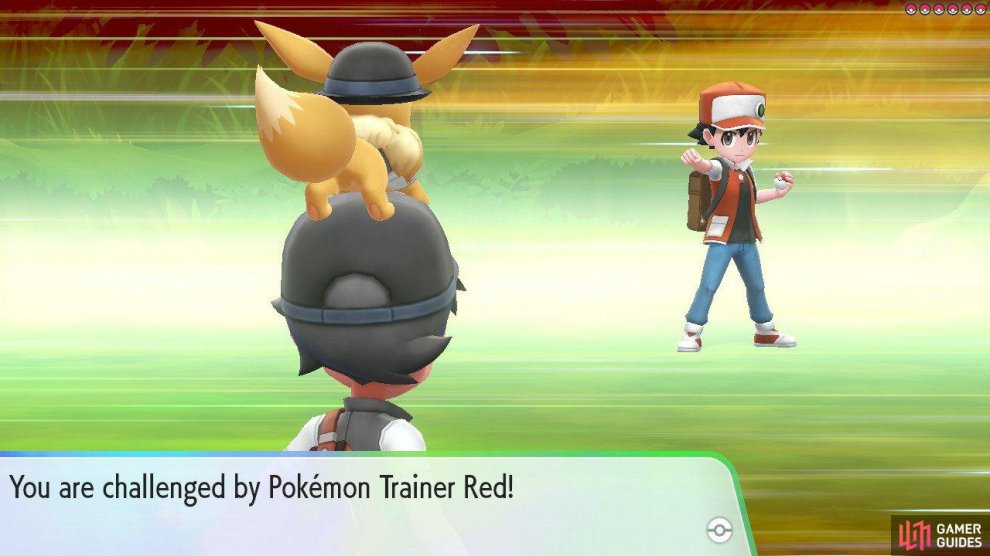 Red leads with his signature Pikachu. Technically it's the easiest of his Pokémon, but you shouldn't take it lightly. It can use Thunderbolt for STAB, Brick Break to break down barriers, Iron Tail to smite Fairies etc., and Reflect to weaken physical moves. A Ground-type would be advisable.

Next, he may sent out the ever-reliable Lapras. This one can use Waterfall for STAB, Ice Shard to try and attack first, Body Slam to potentially paralyse, and Megahorn to hurt Psychics etc. Similar to Lorelei's Lapras, it's a bit of a pain. Your best bet is to combat it with Electric or Fighting-types.

Red's Machamp is a bag of tricks. It can use Superpower for hefty STAB damage, but at the cost of dampening its own Attack and Defence. It's also carrying Earthquake, Fire Blast and--just in case--Hyper Beam. Psychic and Fairy-types will do great here, as will most Flying-types.

Snorlax is a nasty one. It can use Body Slam to deal decent damage, with a chance to cause paralysis. It can also use Toxic to inflict deadly poison, and Protect to stall for damage. Finally it can use Rest to sleep and regain HP. Fighting-types are ideal, but Poison-types are worth considering as well.

Arcanine, Red's faithful canine, can use Heat Wave for STAB, Crunch to punish Ghosts and Psychics, Will-O-Wisp to cause a burn, and Roar to force your Pokémon to switch out. Water and Rock-types will give Arcanine a massive headache, but expect it to use Roar to drag in a disadvantaged party member.

Finally, Red has a Mega Venusaur to complete the Mega Evolution trinity. This one can use Mega Drain and Sludge Bomb for STAB--the former also stealing HP from its opponent. Plus Leech Seed to slowly siphon HP, and Amnesia to buff its Special Defence. If you have a super-effective Mega and/or Mewtwo, now's a good time as any to bring it out.

Defeating Red the first time will earn you the Battle Master title. Afterwards, each time you defeat the Pokémon League, you can challenge him again at the same spot.