It's not just the Gym Leaders that have been getting stronger. If you return to Indigo Plateau, you can re-enter the Pokémon League and challenge the Kanto region's elite trainers, at their full and unbridled strength. 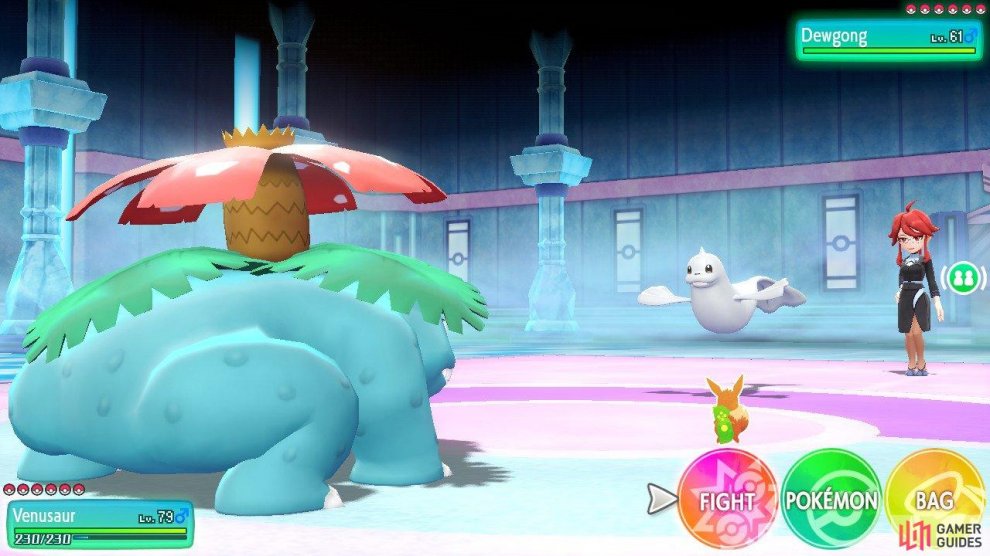 The icy queen leads with her Dewgong. It has Waterfall, Ice Shard and Aqua Jet like before, but can now use Iron Tail. However, this additional move doesn't really change much. Ideally, you should fight it with strong Electric or Fighting-types.

New to Lorelei's roster is the Alolan Sandslash. Because of its unique typing, it takes massive damage from Fire and Fighting. For attacks, it has Ice Punch and Iron Tail for STAB, Ice Shard to go first, and Earthquake to scare Fire-types. It's slow so you should be able to one-shot it before it causes any damage.

Cloyster gains Poison Jab and Blizzard, on top of its previous Hydro Pump and Spike Cannon. But you shouldn't be using a Pokémon that Poison Jab is strong against. Like last time, any strong special attacker can do the job, but Electric and Grass ones are best.

Lapras, Lorelei's strongest Pokémon, can still be a pain to deal with. It can still use Hydro Pump, Blizzard and Dragon Pulse, and has gained Thunder to counter opposing Water-types. Electric and Fighting-types are highly recommended.

Slowbro remains the odd piece of the puzzle, since it's not an Ice-type. Anyway, it can still use Surf and Psychic, and carries Fire Blast in place of Flamethrower. The biggest change is Yawn, which can cause sleep on the next turn. Electric and Dark-types are the safest choices, especially if they're special attackers.

Finally, we have Jynx. It can use Shadow Ball in addition to its original arsenal of Blizzard, Psychic and Lovely Kiss. This allows it to hurt opposing Psychic-types, but we can't imagine you using one. Go with Fire or Steel-types if possible. Or Rock-types if they're not weak to Ice. 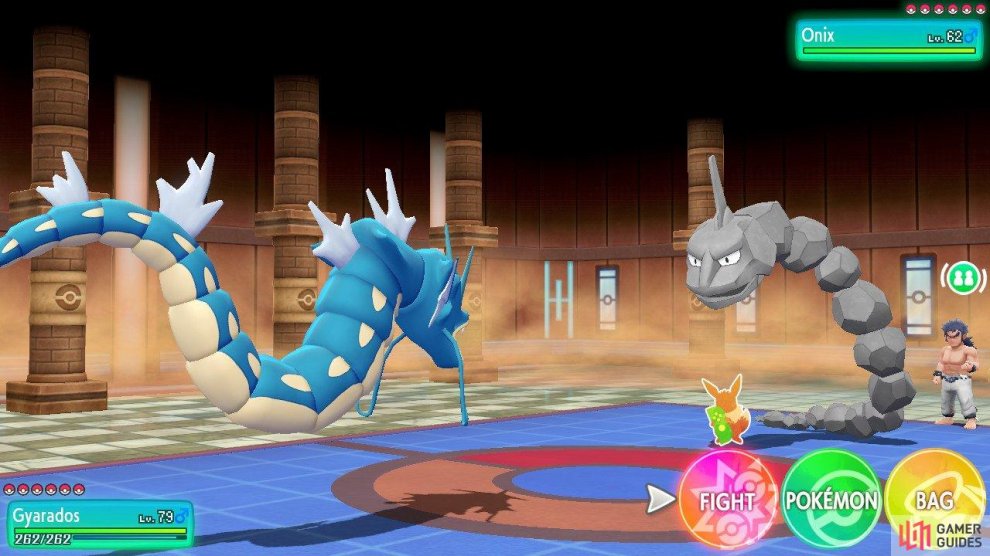 Brawly Bruno leads with his Onix as before. It can use Earthquake, Iron Tail and Stealth Rock, plus Rock Slide for Rock-type STAB. Just like last time, you should aim to one-shot it with a Grass or Water-type before it uses Stealth Rock to deal chip damage to switch ins.

The fast-punching Hitmonchan can use Feint to attack first and negate Protect. It's also carrying Fire, Thunder and Ice Punch to counter a variety of threats. Still, it can't rival a strong Psychic or Fairy-type. A Ghost-type can effectively wall it as well.

Bruno's Poliwrath has learned Earthquake to deal with Electric-types. Together with its original moveset of Waterfall, Superpower and Body Slam, it's a formidable opponent for sure. Grass, Flying, Psychic and Fairy-types are all excellent choices.

Like Lorelei, Bruno has added an Alolan Pokémon into the mix: an Alolan Golem. This Electric variant can use Rock Slide and Thunder Punch for STAB, Superpower to damage Steel-types, and Earthquake to deal reliable damage to most foes. Ground-types will quickly shut it down. Grass-types are also a good choice.

Machamp is Bruno's most prized Pokémon. Like before, it can use Superpower, Rock Slide and Earthquake. In addition, it's carrying Ice Punch to hurt Grass and Dragon-types. A healthy Psychic or Fairy-type can easily clean house.

Finally, the high-kicking Hitmonlee can use Poison Jab in addition to its old moves (High Jump Kick, Feint and Rock Slide). That means Fairies should be somewhat cautious. But Psychics still have nothing to fear. 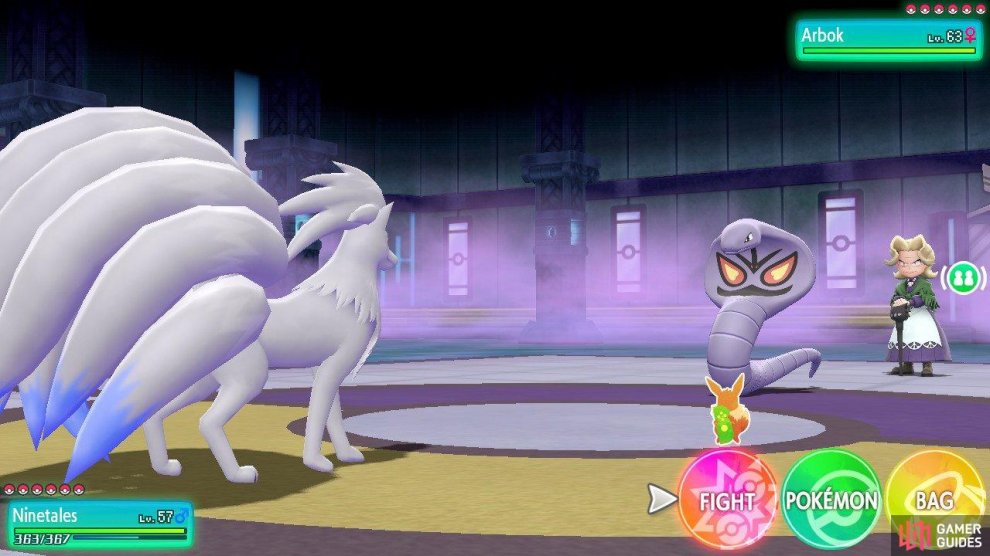 The ghost-loving old lady leads with the same Pokémon: Arbok. This crafty snake can use Poison Jab, Crunch and Glare like before. Plus Earthquake to counter Steel-types trying to wall it. Psychic and Ground-types are strongly recommended to try and one-shot it before it can use Glare.

Agatha may send out her Level 63 Gengar next. It's carrying the usual Shadow Ball, Sludge Bomb and Will-O-Wisp, along with a new move: Sucker Punch. A Dark-type special attacker is ideal, in case it uses Will-O-Wisp. It's fast so there's a good chance it'll use it before you have time to react. Or you could sick Mega Mewtwo on it.

Golbat you should have a counter for, since you're bound to battled tons of these. This one can use Leech Life to hurt Psychic-types and steal their HP, on top of Air Slash, Crunch and Quick Attack. If in doubt, go with Electric or Rock-types.

Weezing is another Poison-type in place of a Ghost-type. It can use Fire Blast to counter Steel-types, in addition to its previous moveset of Sludge Bomb, Shadow Ball and Thunder (upgraded from Thunderbolt). Ground-types are still king, at least before it learns how to float.

Agatha's Alolan import is the Fire and Ghost-type Marowak. This ominous creature can use Flare Blitz and Shadow Ball for STAB, although only the former is a real threat. Plus Bonemerang to hurt Rock-types, and Rock Slide because it ran out of ideas. Smite it with Water, Ground or Dark.

Lastly, Agatha's second Gengar--the Level 64 one--can also use Sucker Punch just like the lower Level one. Its other moves remain the same: Shadow Ball, Sludge Bomb and Dazzling Gleam. Because it doesn't carry Will-O-Wisp, you can safely field a Ground-type. Or continue pummeling it with Mega Mewtwo. 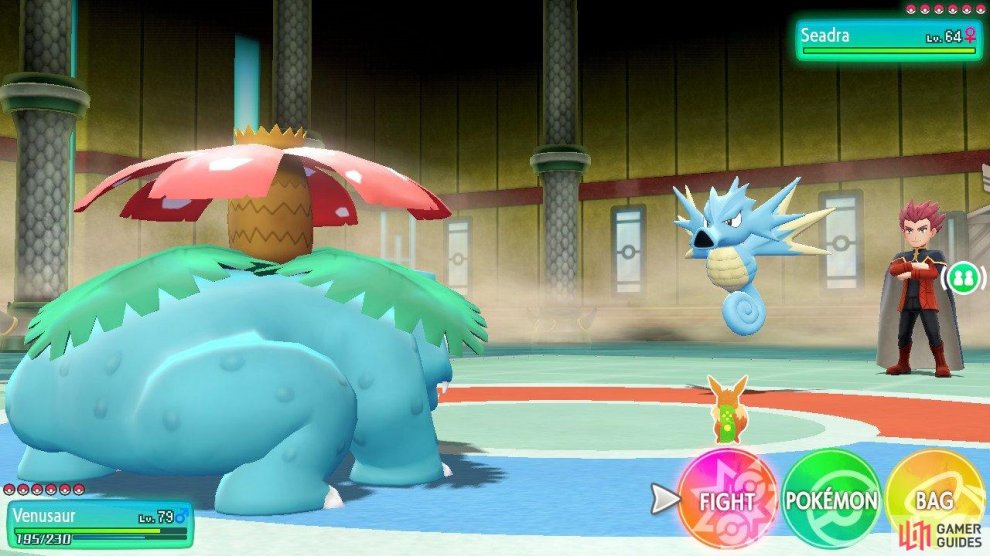 Dragon master Lance begins the battle with a pretend dragon, Seadra. This pure Water-type can use Blizzard to hurt Grass-types, on top of its previous moves (Hydro Pump, Dragon Pulse and Hyper Beam). As such, you may want to rely solely on an Electric-type.

Next, Lance may summon his Alolan Exeggutor. Despite appearances, this hilariously tall palm tree is an actual Dragon-type. It can use Mega Drain and Dragon Pulse for STAB, Psychic to banish Poison-types, and Hyper Beam to fulfil Lance's thirst for big numbers. Ice-types will do catastrophic damage. Failing that, go with Flying, Bug or Fairy.

Aerodactyl is one of Lance's trickier Pokémon to deal with. This speedy, hard-hitting bird can use Crunch in addition to Rock Slide, Earthquake and Hyper Beam. The new move doesn't really change much; you'll probably want to use a Water-type that's not weak to Rock or Ground.

Gyarados is another tough one, but a bit more manageable. So long as you've got an Electric-type handy to take advantage of its double weakness. Anyway, it too can use Crunch, in addition to its original moves (Waterfall, Iron Tail and Hyper Beam).

Dragonite is Lance's trademark Pokémon. If you recall, it can use Outrage, Fire Punch and Hyper Beam. But now it's added Iron Tail to its moveset, to ward off Rock and Fairy-types. Therefore, a strong Water and Ice-type would be the safest choice bar none. Or if you don't like playing fair, a Mega Mewtwo carrying Ice Beam can do the trick.

Finally, Lance has another trick up his long sleeves: a Mega Charizard X. The X variant loses the Flying-type in exchange for the Dragon-type. It can use STAB Flare Blitz and Dragon Pulse, Hyper Beam for burst damage, and Thunder Punch to scare Water-types. If you have a Rock or Ground-type (or one that's both), you know what to do! 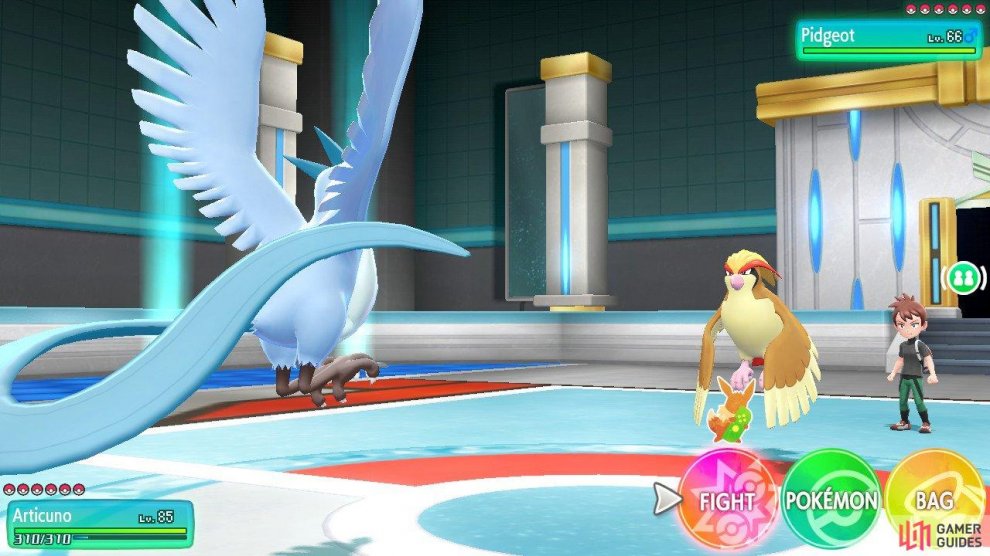 Now the tables have turned--you're the Champion this time, but the battle is very similar to before. Again, your rival leads with Mega Pidgeot. In addition to Air Slash, Heat Wave and Quick Attack, it's gained U-Turn to deal damage and pivot out. Electric and Rock-types are still the ideal counters, especially the latter.

Afterwards, your rival may send out Rapidash. It can use Flare Blitz, Poison Jab and Quick Attack like before. But now it has Drill Run added to its moveset, which lets it combat otherwise resistant Rock-types. Leaving Water and Ground-types as the only safe counters.

Vileplume, in case you forgot, can use Solar Beam, Sludge Bomb and Reflect. Its new move is Dazzling Gleam, which damages Fighting, Dragon and Dark-types. Which you probably wouldn't use anyway. Hit it with Fire, Ice, Flying or Psychic-types.

Moving on, we've got Marowak. Its old moves are Fire Punch and Brick Break. Meanwhile, its new moves are Earthquake (replacing Bonemerang) and Thunder Punch, to hit Water and Flying-types. That means it can counter pretty much all of its counters. However, it's not that strong, so you can likely outpower it with a Water or Grass-type.

Slowbro can use Surf, Psychic and Light Screen like last time, and has gained Blizzard to frustrate Grass-types. Electric and Dark-types are the way to go, but you'll want to act quick before it raises Light Screen, weakening your special attacks.

Finally, if playing Let's Go Pikachu, your rival can send out Jolteon. This speedster can still use Thunder, Pin Missile and Quick Attack, but now has Shadow Ball added to its moveset. This doesn't change a lot though. So pound it with a Ground-type if possible.

Otherwise, your rival will bring out his Raichu in Let's Go Eevee. Its old moves are Thunder, Iron Tail and Quick Attack. Meanwhile, its new move is Brick Break, which can damage Rock-types and removes protective barriers. Similar to Jolteon, a Ground-type would be very useful here, although you'll need to be cautious if they're Rock as well.

After defeating your rival once more, you'll be invited back into the Hall of Fame. Once that's over, you'll be taken back outside the Pokémon League, without having to re-watch the credits roll. Oh, but if you wanted to watch the credits again, you could just check YouTube etc.