After defeating Giovanni at his Gym in Viridian City, it was Game Over for Team Rocket. However, despite this, some of his lackeys are still loitering around the Kanto region.

Do you remember the last time you bumped into Jessie and James? It was when they dug up the Gold Teeth south from Fuchsia City. Anyway, when you have a moment, head back to Route 17, ideally from the west exit of Celadon City.

About a third way down the route, along the eastern side, you can find a suspicious-looking group staring into the sea. Approach them and they’ll challenge you to one last battle, for old time’s sake. 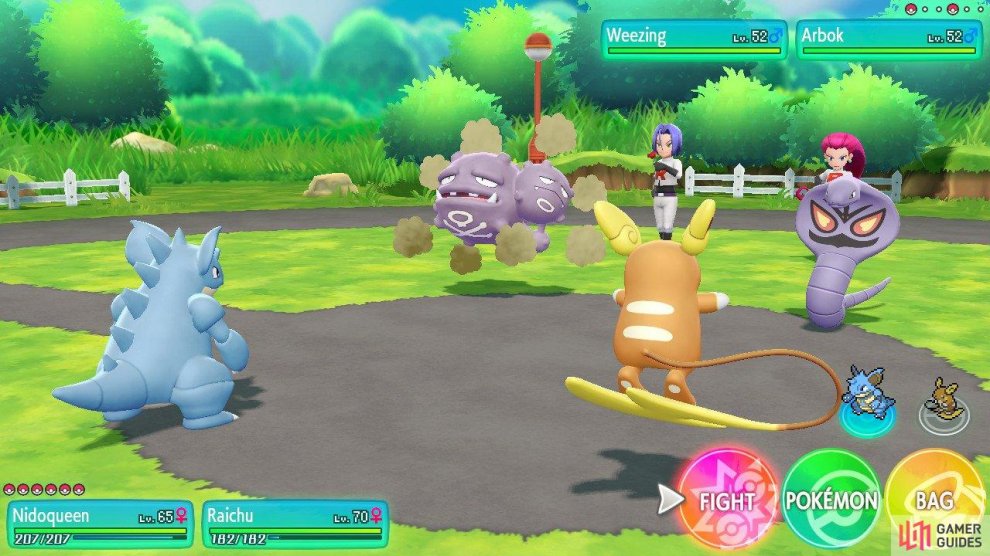 As with all previous encounters, this is a Double Battle, with Jessie controlling Arbok and James controlling Weezing.

Jessie’s Arbok can use Poison Jab for STAB, Rock Slide to hit both targets and potentially cause flinch, Crunch to bite into Psychics, and Glare to inflict paralyse. You should focus on Arbok first with super-effective Psychic or Ground-types, before it cripples you with Glare.

Meanwhile, James’s Weezing can use Sludge Bomb for STAB, Dark Pulse for countering Psychics, Flamethrower to counter Steel-types, and Thunderbolt just in case. Compared to Arbok, it’s less of a nuisance, plus it’s bulkier by nature, so feel free to target it last.

Alternatively, you could hit both with Earthquake, but your ally should be immune to Ground, or able to use Protect.

Defeat the duo and they’ll give you a Blast-Off Set so you can dress up yourself and your partner just like them.

Those two aren’t the only ones still hanging around though. If you’re curious, go back to Giovanni’s office in the Team Rocket Hideout at Celadon City. You can quickly get there by using the lift on B1F to reach B4F. In the corner of the office, Archer is pondering his next move; interrupt him for a battle. 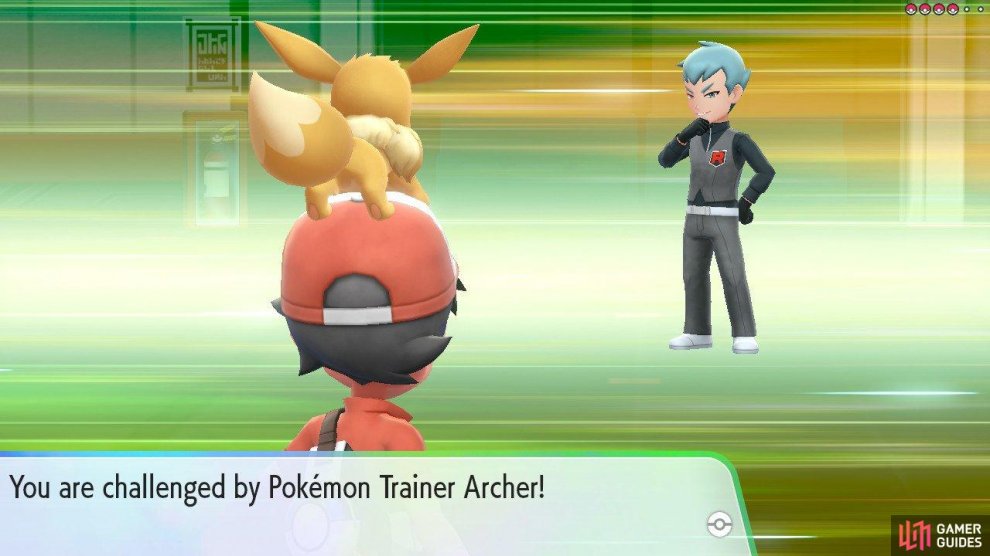 The former Team Rocket admin leads with Electrode. For attacks, it can use Thunder for STAB, Foul Play to damage foes with high Attack, Reflect to weaken physical damage, and Explosion to self-destruct itself. Ground-types are optimal, but be wary that Electrode is fast and can probably use Explosion or Reflect before you can act.

Next, Archer may bring out his Weezing. It can use Sludge Bomb for STAB, Flamethrower to burn Steel-types, Dark Pulse to repel Psychic-types, and Shadow Ball for a similar reason. Like Electrode, Ground-types are the way to go. However, if Electrode managed to put up Reflect, you may want to gamble on a Psychic-type instead.

Golbat is pesky as always. Archer’s one can use Sludge Bomb and Air Slash for STAB, Crunch to damage Psychics, and U-Turn to do the same thing and pivot out. Electric and Rock-types are preferable, as are Ice-types. Unless you’re confident in your Psychic-type (if it’s Mewtwo for example, you shouldn’t need to worry).

Finally, we have Magmar. It can use Fire Punch for STAB, Thunder Punch to hurt Water-types, Brick Break to smash barriers and Rock-types, and Clear Smog to cancel stat changes. Ground-types are again the best choice here. But if they’re strong enough, you could try a Water-type regardless.

Defeat Archer and he’ll read out a letter he was writing to you, before disappearing into the shadows once more. Perhaps you may meet him again in the Johto region in the distant future?