How to trigger: This quest is extremely easy to acquire, all you need to do is basically travel to the town of Falkreath. A guard SHOULD come up to you and ask you if you've seen a dog. Kind-of a weird question, right? Reply however you want and you'll get the miscellaneous quest "Speak to Lod". If this doesn't happen, go away and do come back until it does!

Lod is the blacksmith in town. Once you talk to him, he'll tell you that he wants a dog for company and wants you to find him one. You can also PERSUADE him to give you 50 gold upfront. He'll also hand you some fresh meat. Head out of town to the southwest and you'll soon run across a dog named Barbas. This isn't a normal dog though, it will TALK to you and ask you to help him settle a dispute with his master. Agree to do so to start this quest.

You'll now have to follow Barbas to his master, which starts a LONG journey to the east. Barbas will lead and you will follow. He'll end up leading you through the destroyed city of Helgen (which I'm sure you remember) and then to a dungeon called Haemar's Shame.

Once inside you'll see that ol' Barbas is WAY ahead of you. Stupid mutt. Don't worry, he can't die. This place is chock FULL of vampires though, so take out the one guarding the entrance and loot the chest up where he was. Now continue on and watch out for a trap while taking down another vampire. In MY game, Barbas was in the next room and had killed a vampire fledgling and was killing a vampire nightstalker. Heh, help him out and loot the place good before accompanying him. Further in Barbas will start shit with some more vampires, so let him take the attention and pick them off one by one. Be sure to loot again before going down a ramp. After the first ramp is a small study area where you can find the SKILLBOOK "Response to Bero's Speech", which will raise your DESTRUCTION skill by one. Continue on and enter Haemar's Shame.

In here proceed forwards and kill whatever you come across that Barbas hasn't killed yet (for me it was one vampire and a frostbite spider). You'll shortly reach the shrine of Clavicus Vile. Go activate it to talk to him. He'll thank you for helping him out already by "curing" his followers vapirism! Ha. Tell him you're here to reunite him with Barbas and he'll outright refuse... unless you and Barbas go retrieve the Rueful Axe for him. Agree to do it and go up the stairs behind the shrine and loot the chest. You can make a quick exit back to the world map from this room by pulling the chain nearby to open the way. In MY game, Barbas was by the exit fighting vampires. That crazy dog!

Once you're back out on the world map, you'll see that the axe is in a place called Rimerock Burrow, to the west of Solitude. Make your way there now. It's off a brick road and you want to approach the dungeon from the southeast.

Be careful when you enter this place, as there's a powerful mage named Sebastian Lort. He often has an Atronach out and can drain your health fast, so be careful. Kill him off and take the axe off the table. Be sure to loot the place as you can find a SKILLBOOK called "2920, Hearth Fire, v9", which will raise your Conjuration skill by 1. Head back out to the world map and fast travel back to Haemar's Shame.

Head inside and make your way back to the shrine. Be careful of any enemies that may be alive on the way inside (oddly enough, a master vampire was by the shrine for me when I got there...). Once you get back and speak to Clavicus, he will tell you that you have two options: Either give him back the axe or, if you wish to keep it, use it to KILL Barbas.

o Kill Barbas with the Axe:

Barbas will try to stop you before you do, telling you that you can get Clavicus' Mask if you just give him the axe. Don't listen and strike him with the axe. One shot is all it will take. Apparently old Barbas can go 4 vs. 1 against some vampires, but falls in a single axe swing. Afterwards talk to Clavicus and you'll get to keep the axe. Barbas will turn into a statue by Clavicus' side.

o Give Clavicus the Axe:

Refuse Clavicus his fun and Barbas will once again take his side by his master (in status form, of course). Clavicus will try to punish you for being boring, but Barbas will stop him and you'll end up getting the Masque of Clavicus Vile.

Note: It really doesn't matter WHAT option you pick, but unless you REALLY have a thing for that axe, the masque is the obvious choice here as it is a great item and is required for the trophy/achievement Oblivion Walker . 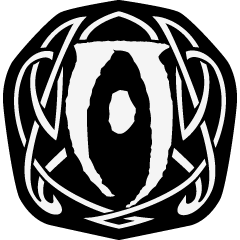