We’re off to find Serena’s mother, so we need to fast-travel back to Castle Volkihar with Serena and when you arrive, run left around the pathway here to the building tucked away by the water’s edge at the back of the castle. Fight off the multiple skeletons here before entering the doorway at the top of the stairs.

Once you’re inside, walk around the corner and then you’ll be in a large room with a bridge crossing the stream in the centre. Kill all Death Hounds and Vampires that show up to the party and then take a right, over the bridge, and in a cubby-hole to the right you’ll find a chest. Inside there’s a powerful warhammer known as the [Glass Warhammer] , along with potions, gold and lockpicks. Around the corner you’ll find an alchemy table and a bookshelf with some potions on it for you to pocket. In the next room you’ll find a level on the left that you need to pull to drop the drawbridge covering the exit in the room below.

Kill the Skeleton in at the wooden bridge crossroad and hang a left (as the right path is only for those who fall into the waters below and need a way back out). Walk past the spikes, kill the Death Hounds that show up, go left, up the steps, grab any potions you need from the cupboards up here and then break through the right-hand spider webs to reveal an Adept locked chest.

Break through the remaining web to face off against a Giant Frostbite Spider mini-boss. Pull the lever behind it, open the nearby door and then drop down to the lower ledge again. Now head back to the wooden crossroad and go left through the newly opened path. You’ll reappear in a courtyard where Serena thought her mother would be. We need to solve the sun-dial puzzle to proceed on, so let’s get cracking shall we? There’s three missing sun-dial pieces missing, each representing a state of the moon (full moon, half-moon etc). Here are their locations:

Note: You can enter the West or East towers from doorways in the courtyard, but apart from some Gold Ingots hidden behind a locked door (and numerous Skeletons and Gargoyles), there’s nothing of any real note to be found in either of them.

With all three dials in your possession, place them all down in the empty dial slots and you’ll open up a secret passage to a hidden tunnel below.

Once you’re in the tunnels, pocket the coin bags from the shelf to your right and then pull the chain on your left to open up the secret exit ahead of you. There’s nothing of any worth in here, so go up the steps at the end of the room, open the door and ready your weapons for some Skeleton-bashing action!

When all of the easy-to-kill Skeletons are no more; walk up the right-hand stairwell and up to the higher part of the castle. Smash the Gargoyle that appears to pieces before going through the door on your right. Kill the Skeletons at the top of the stairs; you can pick the ‘Adept’ lock of the closed door if you wish for some money and additional Lockpicks. Otherwise keep killing each Gargoyle or Skeleton that shows up as you make your way up each flight of stairs.

When you reach the doorway with a desk nearby, you can pick up a [Scroll of Fire Storm] , some [Lockpicks] (and a [Lute] should you ever have needed one). Go through the door, go up the stairs in the top-right corner of this room (killing all Skeletons in your way) and then when you walk up the stairs in the next room you’ll reach an open area with a Gargoyle statue at the end.

The gargoyle won’t come to until you after you’ve pulled the chain behind it and started walking back. Deal with it; then go back to the stairs you just came up and to the right the path will now be open. 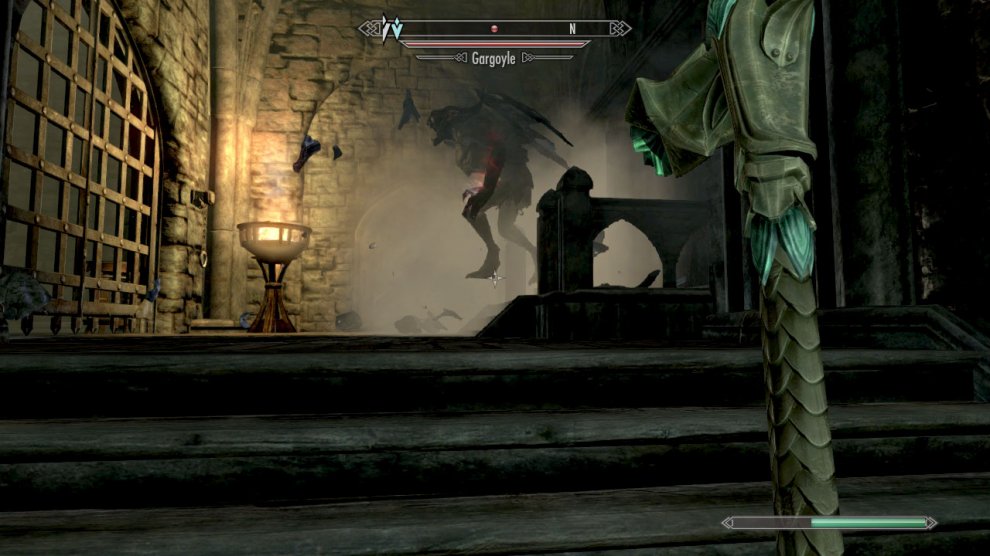 Run to the top of the stairs, smash in the Gargoyle’s stone face and then you can either pull the chain by the door to enter the room with Skeletons, or, you can pick the ‘Expert’ door lock; which leads to an armoury full of potions, along with regular and enchanted weapons the [Iron battleaxe of Fatigue] and the [Imperial Bow of Sparks] .

Opening the door up here will create a funnel for the enemies to get at you via the nearby archway (making each encounter easier than just entering the room the other way).

Run over the bridge, hang a right, run up the stairs (killing the Skeleton in your way) and continue up the various sets of stairs until you reached the closed double doors.

There’s numerous Gargoyles littered around this room, so it doesn’t take a Rocket Surgeon to work out that a few of them will cause you grief in a few moments. The way out of this room is via a secret exit that’s located in the top-left corner of the room where the shelves are. Turn the left-hand candles to open up the secret passageway. 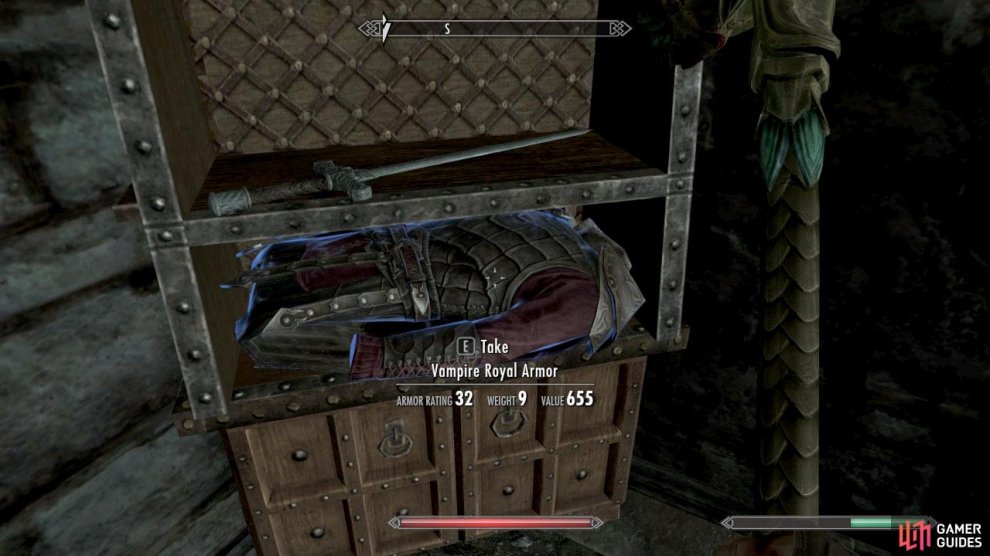 Before heading through though, there’s a really nice piece of enchanted Light Armor nearby, so kill every Gargoyle that comes to life and look for the shelf in between the coffins in the corner. It’s got the [Vampire Royal Armor] that not only offers decent protection for little weight, but it also regenerates your magicka 125% faster! Nice.

Now go through the secret exit and run up all the winding stairways until you reach the large open room at the top. You can save yourself a wealth of time now by heading straight to the bookshelves on the right of entrance and taking the red book labelled [Valerica’s Journal] (Serena will ask you to find it in a minute).

You can also sped things up by grabbing the following ingredients from the locations detailed below as you’ll also be asked to find them too by Serena: 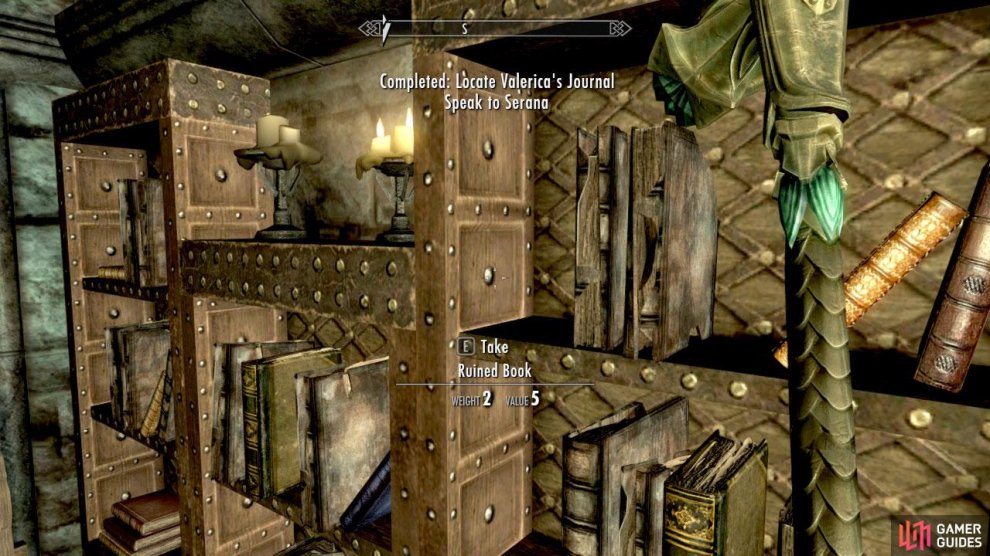 Once they’ve all been gathered, go to the Portal Vessel overlooking the middle of the room, dump your ingredients into it and Serena will open up a gateway to another world (the Soul Cairn). Try and enter and you’ll take damage (unless you allowed yourself to be turned into a Vampire earlier on in the DLC).

So if you’re not already a blood-sucking Vampire, then you now – once again – have the choice to be turned into one by Serena or you can have some of your soul trapped in a Soul Gem (reducing both your Magicka and Health points by 45 whilst you’re in the Soul Cairn).

Note: Turning into a Vampire now won’t affect your standing with the Dawnguard’s as they will recommend a ‘cure’ for your ‘illness’ (but they won’t kick you out of the faction).

Stepping into the Soul Cairn will complete the mission ‘Chasing Echoes’ and begin a new one ‘Beyond Death’.