This has the same objective as the Dawnguard-only version of this mission and – for the vast majority of it – plays out the same (bar the end bit). So we’re going to copy the Dawnguard-version text and tweak it as required.

Harkon will task you with finding a ‘Moth Priest’ who can read the Elder Scroll. You can, optionally, speak to either:

So fast-travel to Dragon Bridge if you’ve been there already, otherwise you’ll find it located east of ‘Volskygge’ (on the right-hand side of the mountains). Once you’re at Dragon Bridge, look for a kid called ‘Clinton Lylvieve; who’ll tell you to head over the bridge and follow the path to find the carriage the Moth Priest was in. 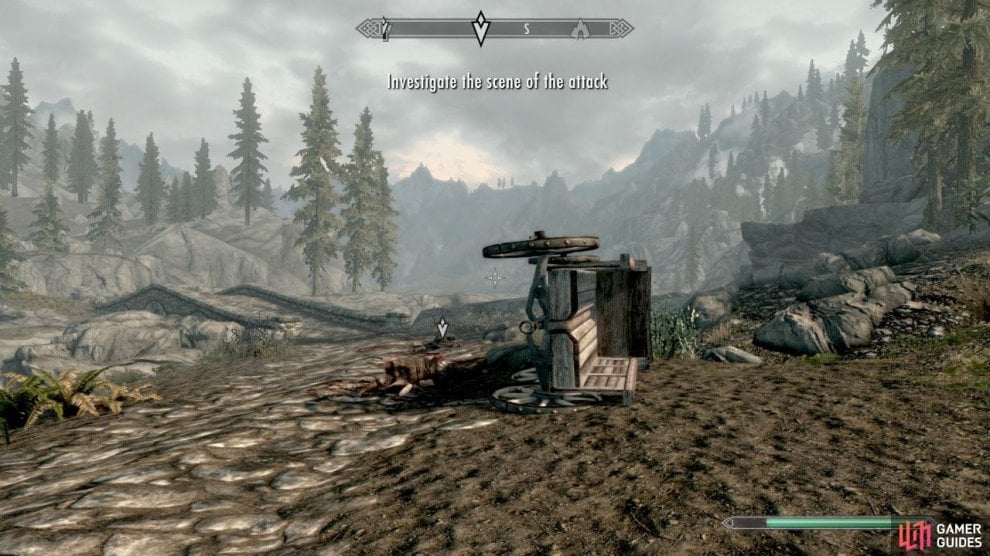 Once you reach the carriage it’ll be overturned with a dead soldier and vampire on the ground nearby. Search the vampire for a note and after reading it you’ll be prompted to head to ‘Forebears’ Holdout’ (it’ll be highlighted on the map for you).

Step inside the cave and be ready for a few fights with Death Hounds and multiple Vampires. Take care of the two Death Hounds first, mosey over the bridge and then ready your weapons and/or magic for the main event.

Start killing all Vampires as you make your way up to the level above where you need to kill a Vampire called ‘Malkus’ who’s got the [Weystone Focus] that you need to unlock the magic barrier surrounding the priest.

Behind the barrier you’ll also find a large chest with a powerful enchanted two-handed sword in it known as the [Dwarven Greatsword of Torpor] , along with an [Elven Bow] and some gold. Take the Weystone Focus to the top floor and place it in the pedestal-like lock up here to drop the barrier.

Once Dexion is free he’ll turn hostile on you, so beat him up a bit and then use your Vampire Seduction power to subdue him; before finally biting him to make him obedient. Command him to go to the castle and then fast-travel back there yourself. You’ll trigger off the same two missions as if you were playing the Dawnguard (‘Chasing Echoes’ and ‘Seeking Disclosure’).