At the Summit of Apocrypha

Note: You can only earn two Dragon Souls during your time within the Dragonborn DLC, so it’s wise to bring in a Dragon Soul from the main game before you get this far (as Miraak can steal any Dragon Soul during this DLC).

You’ll have encountered a Dragon where you learned the shout 'Power', so that’s another opportunity to nab one (assuming Miraak doesn’t steal it like he can do).

Unlock your 'Bend Will' Shout 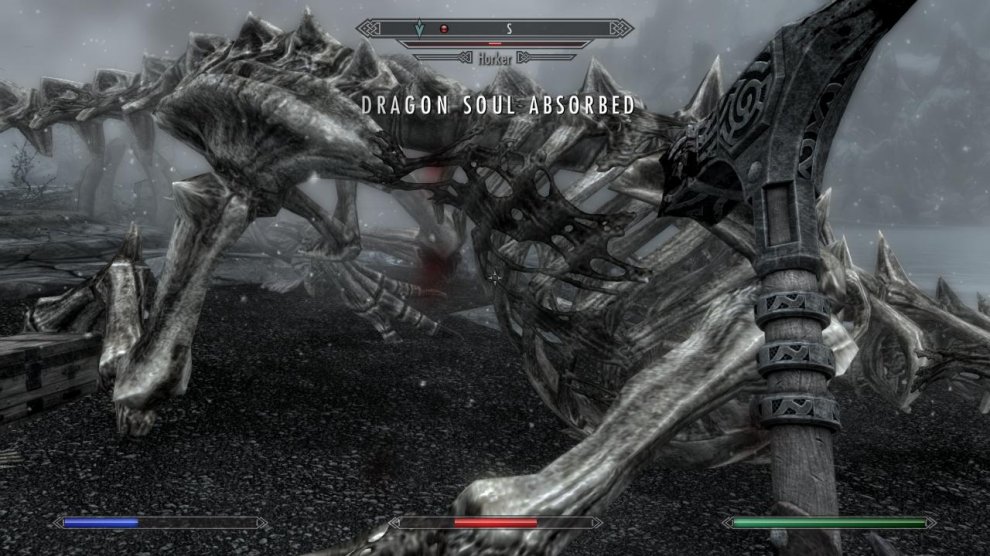 To unlock your shout, simply head into the magic menu, then go to shouts and spend the Dragon Soul to unlock the shout. Nothing more difficult than that.

This part is equally easy, simply open up your inventory, go to books and read the [ Black Book: Waking Dreams ] to be sent to the realm of Apocrypha (where the mission starts properly). 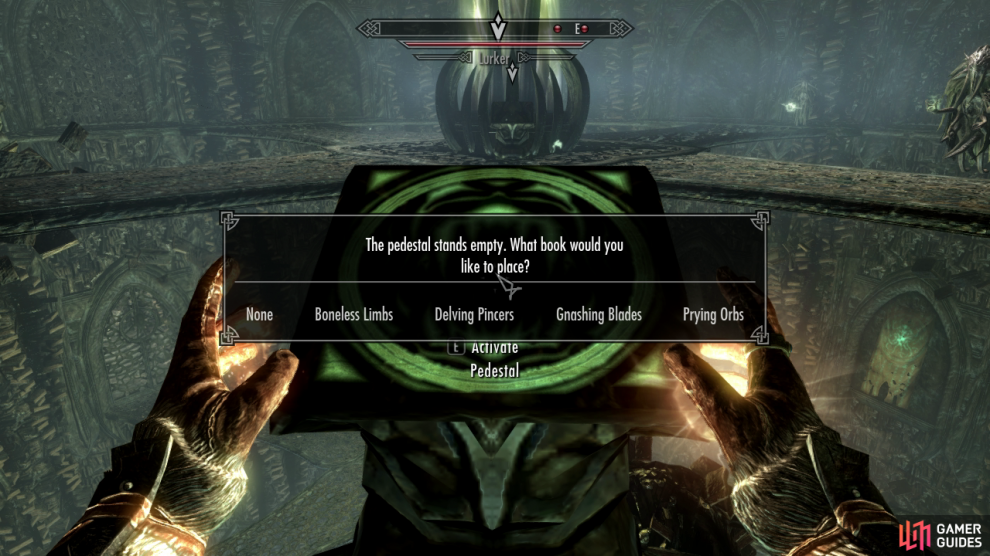 Once you’re in the temple area, you can turn around and read some of the lore books on the back table. To the right side of the area there’s a closed gate with a pod beside it, if you open up the pod you can find an assortment of additional Lore books and some [ Minor Magicka Potions ] . Once you’re ready, read the book to head to Chapter II.

Note: Whilst you can certainly fight the enemies leading up to Miraak, it’s much easier and quicker to simply run past them.

Dash up the stairs and on the table where the Seeker is, there’s a [ Heavy Armor Forging Book ] that’ll boost your Heavy Armor stat. Run up to to the top floor and grab the [ Boneless Limbs ] book from the pedestal.

This’ll bring out the stairs leading to the exit on your left, so head on up, turn right at the gate and read the book leading to Chapter III.

Run forwards, hang a right (running past the Seeker) and then go left and up the stairs. At the bottom of the stairs there’s a pod with some Lore books, gold and potions. At the top of the stairs, on the right, is a table with a few items such as a [ Scroll of Fast Healing ] and the skill book [ The Song of the Alchemists ] . Directly opposite the table is the book you need [ Delving Pincers ] .

Run back down towards the entrance to this chapter and near the end of the tunnel you should see an open gate on your left. Activate the Scrye, replenish your Magicka with the blue Font to the right, run straight up the stairs that appear in front of you to the top.

Directly at the top of the hill there’s a [ Font of Stamina ] and also a table with a [ Scroll of Fast Healing ] and the skill book [ Catalog of Weapon Enhancements ] . In the large room to your right you’ll find a series of walkways, in the upper-left corner you should see a blue [ Font of Magicka ] and beside it is the next book you need to collect **** [ Prying Orbs ] .

There’s also a nearby pod with the usual selection of Lore books and gold/potions.Now dash back to the center of the room, go left and then at the end go right and then left (into the now open gate/tunnel). Inside the tunnel there’s a couple of Seekers, a [ Font of Magicka ] and a [ Font of Stamina ] . Read the book to begin Chapter IV.

Immediately go right and open up the pod for a variety of Lore books, weapons and a [ Scroll of Conjure Storm Atronach ] and a [ Spell Tome: Fury ] book. Now proceed down the stairs to your left and then past the table (which only has Lore books on it) and into the tunnel up ahead. Inside the tunnel on your left is a [ Potion of Vigorous Healing ] , grab it then run to the end of the tunnel (causing it to alter shape).

Run back to where you found that potion and a new tunnel has opened up directly opposite it.Running to the end of this new corridor will cause the tunnel to morph once again, so head back to the entrance to the tunnel to enter a new area.

Make your way up the stairs to your right and take the following magic scrolls from the table here: [ Scroll of Fury ], [ Scroll of Muffle ], [ Scroll of Oakflesh ] and [ Scroll of Firebolt ] . Up the top of the nearby stairs is the last book [ Gnashing Blades ] .

A new tunnel will have opened up on the floor below (opposite where you came in), run down here and on your right are a couple of tables stacked with loads of Skyrim Lore books (for those of you who are into reading them).

Nearby are another couple of tables with more useful items on them such as: [ Scroll of Detect Life ], [ Scroll of Fast Healing ] and [ Scroll of Fury ] . Run down the tunnel to your right and just past the Seeker is a [ Font of Stamina ] and a pod with gold, potions and Lore books.

Dash left and in the adjoining room run up the stairs at the opposite end. There’s a table up here with even more Lore books for your reading pleasure, a [ Font of Stamina ] up on a wall and then a Scrye that needs activating.

Drop back down to the bottom floor, make your way through the entrance corridor and it’ll have changed. Go up the ramp and at the room at the top activate the Scrye opposite the entrance to the room. This’ll open up a doorway just up ahead, so go inside and at the end of the room search the vessel for a [ Dwarven Greatsword ] and loads of Lore books. On the table to the right is a [ Scroll of Magelight ] should you want it.

Activate the nearby Scrye, dash past the Lurker and up the newly opened stairwell, use the [ Font of Stamina ] and [ Font of Magicka ] before reading the book that leads to Chapter V.

After running through the next corridor, you’ll enter a chamber where you need to place all four books in the correct pedestals to proceed. The correct order is (based on the first pedestal you see when you enter the room):

Note: There’s a couple of pods in this room with gold, potions, scrolls and Lore books should any of those be of any interest to you.

With the final book placed down in the correct location, a final book will appear in the middle of the room, reading this book will take you to Chapter VI.

Hang a right when you first enter and on the table in front is a [ Scroll of Stoneflesh ], [ Scroll of Grand Healing ] and a Skill Book [ The Art of War Magic ] . At the top of the stairs you’ll enter an open room, immediately dash to the back of the room, past the Seekers and stand by the wall to learn the next Power Shout word!

Use the 'Bend Will' Shout to tame Sahrotaar

Sahrotaar will now appear and he’ll take you out super quick if you don’t act quickly. Once you’ve learned the word, make a dash back to the entrance of the room, turn around and then, at a distance, use the 'Bend Will' shout on the dragon to tame it.

Walk up to the dragon and board it, triggering off an on-rail sections where you can use your magic to attack any enemies below. The commands appear on the screen, but essentially just tell Sahrotaar to fire at enemies as he makes his multiple passes and once both islands worth of creatures are dead he’ll take you to Miraak for the final battle. 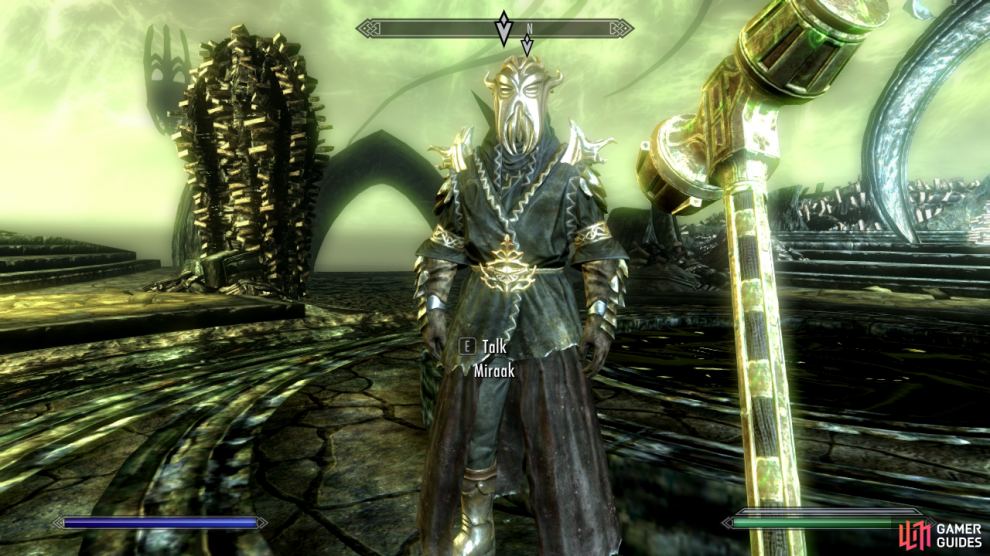 Miraak has a very potent assortment of ranged magical attacks, yet his close-range sword attacks are less damaging, so those of you with half-decent combat stats should find this fight much easier than magic-types (unless your Mage is uber-powerful that is).

The basic premise of this battle is that Miraak will take up to 75% damage before calling in another dragon and stealing its soul to replenish his health. If you can stay close to him you can block his melee attacks and counter with your own, more powerful weapons.

Each time he calls a dragon down, wait for him to re-appear fully before attempting to re-attack. Watch out for Sahrotaar who will also attempt to - unsuccessfully - kill Miraak for you. After replenishing health for a third time, Miraak will finally summon and kill Sahrotaar. Once you see this, this is the last time Miraak can heal himself.

Pummel Mirrak into the ground, use up any stamina and magicka potions you need to for this final battle and then when you get his health down to 10% it’ll trigger a scene ending the fight. 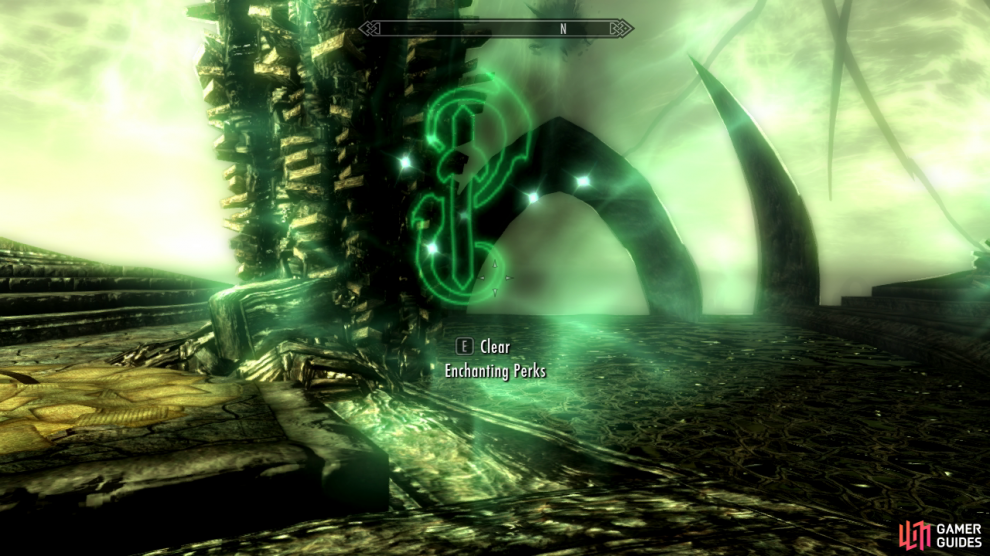