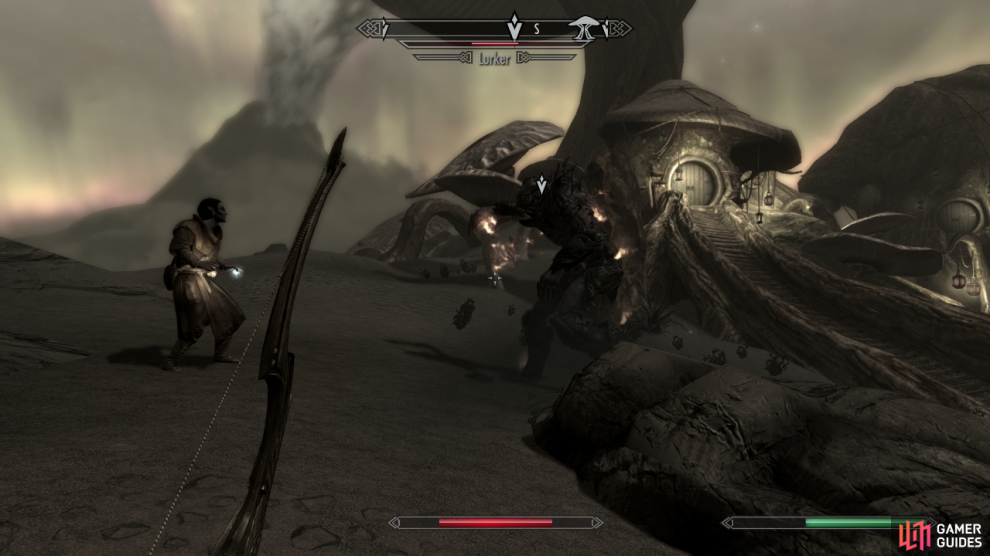 Option 1: When you’re following Neloth on the 'Path of Knowledge' mission, you can lure a Lurker over to him and he’ll make light work of it.

Option 2: If you’ve already completed this mission, then lure it to the town of Tel Mithryn but get behind the sorcerer Talvas Fathryon who’s practicing his spells outside. He too will speed the Lurker killing process up quite nicely. Be careful not to attack Talvas or he’ll turn on you once the Lurker is dead!

Loot its corpse for a unique item: [ Circlet of Minor Destruction ] . Be careful though as another two Lurkers can rise up from the water and make your life even harder!

Once it’s been defeated, if you go to the stone and activate it to learn a new spell known as [ Sun Flare ] . 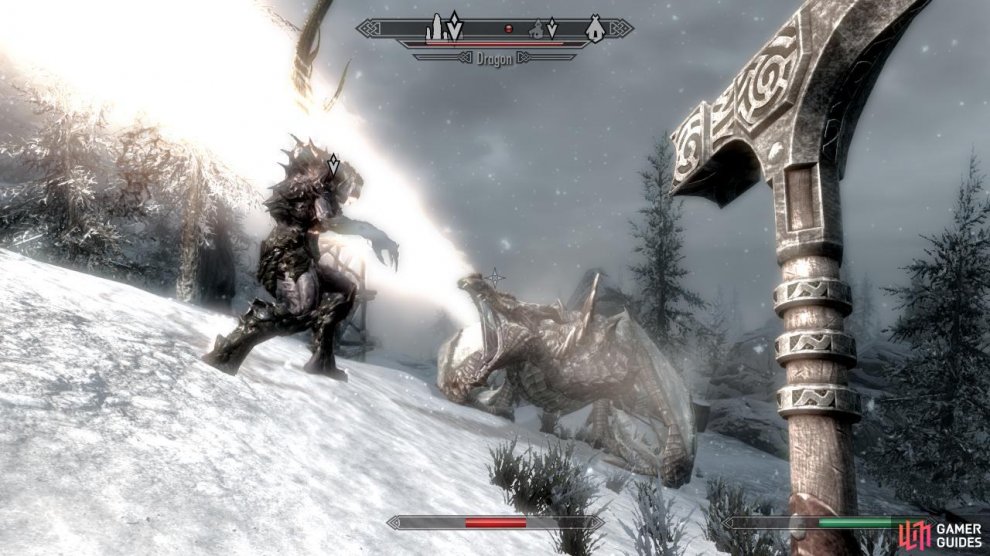 Before you use the Bend Will Spell on the stone, head south of it (on the map) and you’ll go past a series of dragon carcases. You should now encounter a dragon resting nearby, so let it spot you and run back to the Beast Stone.

Use your Bend Will Shout now to awaken the Lurker and the trick is to get the Lurker in between you and the dragon so its fire breath damages the Lurker, turning its attention on to the dragon. You can use this opportunity whilst it’s distracted to damage it yourself and take it down quicker.

The dragon is a fire breathing one, so fire resistant potions will prove to be rather handy in taking it down. Once the coast is clear, activate the cleansed stone for [ Conjure Werebear ] skill. 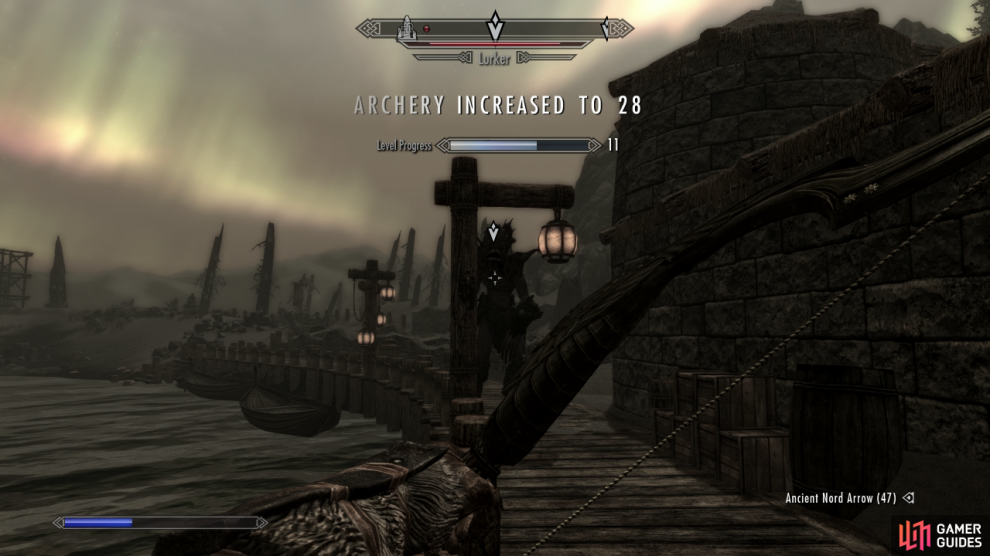 Fast travel back to the shrine (it’s near the boat that brought you into the area at the very start of the DLC) and then use your Bend Will Shout to reveal the Lurker.

The trick we used to simplify this fight was to lure it all the way down the wooden walkway by the dock and then watch as it gets stuck on the wooden post with the lantern on it. Now hug the wooden fence on the left and its attacks shouldn’t hit you here.

Now it’s simply a matter of killing it with arrows or any other long range attack. Loot its corpse for a unique [ Necklace of the Squire ] . If a second Lurker has spawned help out the AI in taking it down as well. It should have a [ Ring of Minor Illusion ] for looting for your troubles.

Go back to the stone and touch it to unlock a new skill [ The Bones of the Earth ] . 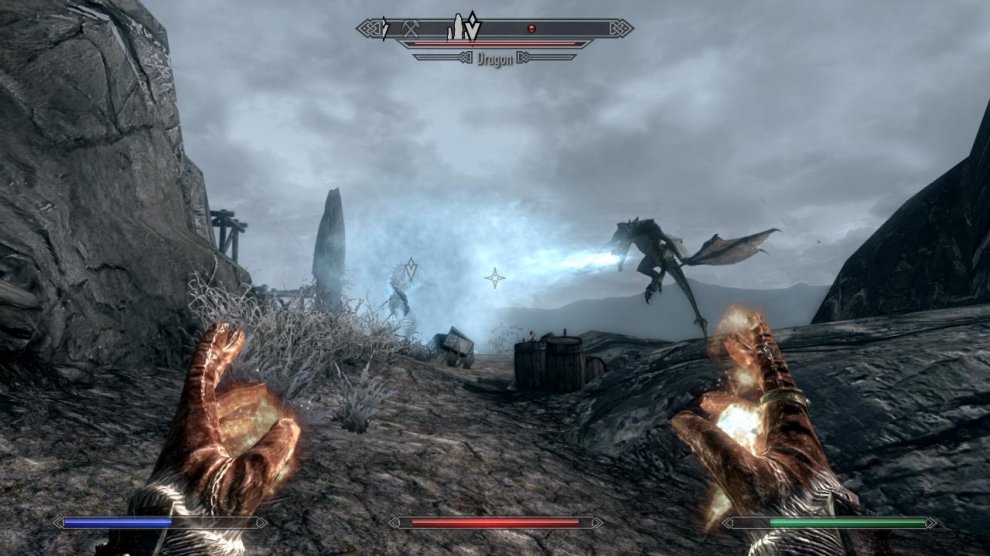 Once you reach the Water Stone you need to approach it with care as there’s a Cultist there who’s very quick to start attacking you. Once he’s been dealt with, you need to prepare yourself for the upcoming battles (notice we mention more than one).

Not only will a Lurker appear when you use your Bend Will shout, but you’ll also encounter a dragon as well! Thankfully the Lurker and the dragon aren’t the best of friends and they’ll begin to attack each other.

Whilst the dragon can deal pretty decent damage to the Lurker, the Lurker can heal itself again as the dragon flies away before returning. You can round around the stone itself to provide constant cover and only attack as the Lurker pauses just after an attack (which should hit the stone and do you no harm).

Miraak will always steal the soul of this dragon when you kill it (it’s an ice breathing dragon, so protect yourself with any ice-resistant potions you may have). It’s not a massively difficult fight, but if you’re struggling, then run up the hill and lure it towards the barrels on the hill as this’ll prompt some Reiklings to show up, distracting it as you kill it.

Head back to the cleansed stone and activate it for a new skill [ Waters of Life ] .

Once you’ve cleansed all four stones, fast travel back to Skaal village and speak to Storn to move the main story forwards.