The Fate of the Skaal

Once you exit out into the open with Frea, make a quick detour to the Wind Stone to unlock it on your map, it’ll make an upcoming quest a bit quicker to get to (as it’ll allow you to fast travel to this location). It’s an easy enough trek to the Skaal Village, so just keep alongside Frea until you both arrive there. 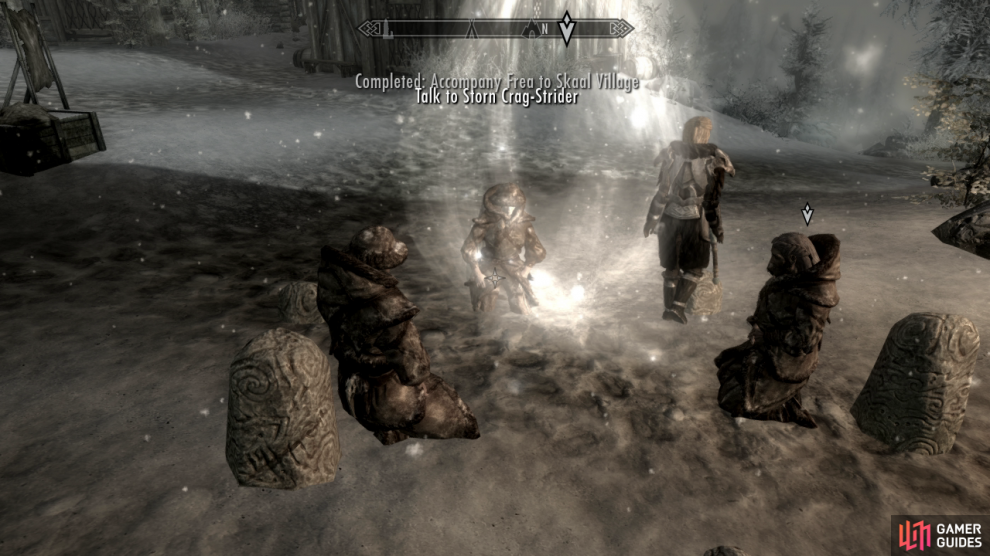 Once you’re standing by the group, look for the man the marker is pointing out and start a conversation with him. He’ll tell you that you need to learn the word of Power, which requires you trundling along to Saering’s Watch.

One thing’s for sure, it’s a right pain in the butt to get there as it’s at the top of a mountain and there’s no quick and easy way to get there. The route we took was fast traveling to 'The Abandoned Lodge', which is located near the 'Frostmoon Crag' area.

From here we headed in a North-Easterly direction until we passed through 'Moesring Pass', then proceeded to continue North until we reached Saering’s Watch. 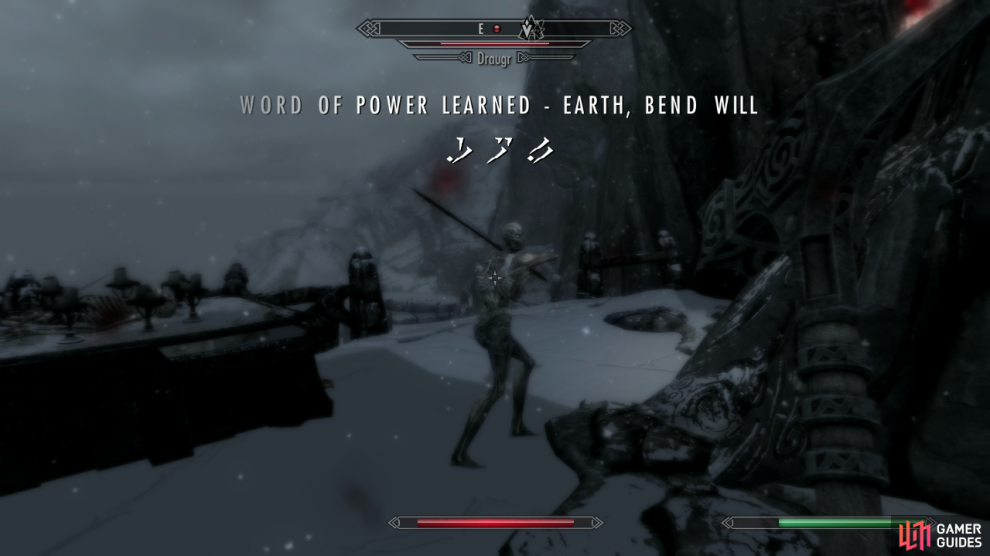 Once you get here you’ll notice the Draugr’s fighting off a dragon attack, so use this time to head up the steps on the left side of the area and at the top you’ll not only find the wall holding the new shout word, but there’s also a few rather unfriendly Draugr’s that show up.

Once they’ve been taken care of, look for a nearby chest that’s got a few nice treasures hiding away inside, such as the [ Steel Greatsword of Souls ] and the [ Leather Armor of the Minor Squire ] . It’s now a matter of turning your attention on the Dragon itself, so if you’ve got any ranged weapons (particularly a bow and a lot of arrows) now’s the time to use them.

It’s a fire-breathing dragon, so any fire-resistant potions will come in especially handy for this battle (as it will try and burn you to a crisp once you start attacking it). Keep the pressure up (there’s plenty of cover on the lower ground if you need it) and once you’re victorious you should get to keep this Dragon Soul (although sometimes Miraak can absorb it first on you, but this is rare).

Use the 'Bend Will' Shout on the Wind Stone

With the power learned and the dragon out of the way, if you’ve got a Dragon Soul ready now’s the time to use it to unlock the 'Bend Will' shout. Once it’s been unlocked, fast travel to the Wind Stone (that we purposely unlocked earlier on) and save the game! (You’re about to trigger a battle with a rather formidable enemy, so saving is highly encouraged). 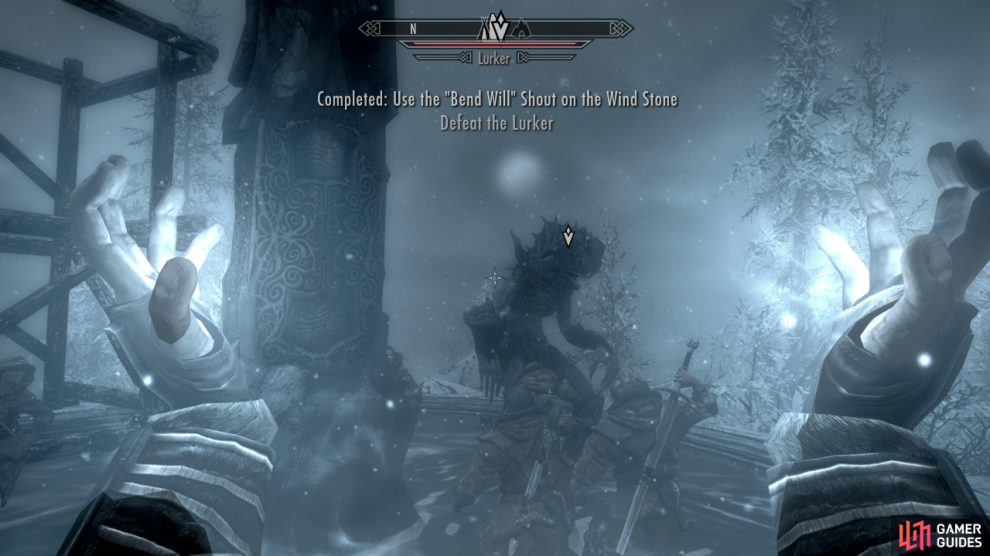 Face the stone and use your Bend Will shout to break the monument and summon the Lurker mini-boss. It’ll rise out of the ground on the right side of the statue, so use this time to get some heavy hits in before it can retaliate (a scroll attack is especially effective here as you’ll have time to summon it).

If you’re going for an up-close and personal battle then be extra weary of its stomp attack that will summon a pool of black tentacles from the ground. One trick is to play hide-and-seek with it around the central statue itself, using the cooldown time between its attacks to hit it.

One important point to note is that whilst the villagers will help in attacking it, if you want to fully complete this DLC with all quests, then you must make sure Fanari Strong-Voice survives as she’s pivotal to a future side-quest later on. Once the Lurker has been killed, you can loot it for gold and for the [ Ring of Minor Sneaking ] .

Fast Travel back to Skaal Village and then enter the Shaman’s Hut. In the corner of one of the bedrooms Storn will be resting. Chat to him to finish this quest and trigger the beginning of the next one: ’ The Path of Knowledge '. It’ll also simultaneously unlock the mission ’ Cleansing the Stones '.

Warning! Completing the ’ Path of Knowledge ’ quest will prevent you from attempting any Skaal side-quests until the main story has been completed! Bear this in mind if you want to mess around in the game alongside the main story.