Ok, our first goal is to get old Esbern to Riverwood in one piece... easier said than done. Before going anywhere, be sure to loot his house, as there are several good things lying around, including a skillbook that ups your one-handed skill by one called Fire and Darkness.

Kill them off and ask Esbern if he knows the way out to have him lead.

Follow him to **** The Ratway Vaults and stick with him as he leads you back to the Thieves Guild. Back out at the Ratway you may be the target of an assassination attempt by a Khajit named Shavari (who was sent by someone named "E") but Esbern will help you out. Does this guy even need an escort!?

Head out to Riften and once you're out to the open world you can fast travel back to Riverwood.

Go down to the secret room where Esbern will divulge our next plan: to go see Alduin's Wall.

He has rediscovered its location at the Sky Haven Temple and believes it is the key to defeating Alduin. Delphine and Esbern will be coming with us this time though, although you may tell them that you'll meet them at Karthspire if you wish and travel alone. Delphine will give the Inn to Orgnar before she leaves.

We'll now have to reach Karthspire, which is on the western side of the map. It's just east of Markarth , or west of Rorikstead . You can take a carriage from Whiterun to Markarth if you wish (which is what Delphine suggests) or you can walk there from the east.

Note: I personally walked from Rorikstead, but I saw Alduin arrive and just west of the town he resurrected another dragon, this one named Nahagliiv. The guards nearby can help you take him out, just keep your health up.

From there, I headed west to a place called Sojund's Sinkhole. Here I fought yet another dragon, this one a Blood Dragon that used ice attacks. A guard nearby will help and makes a good distraction, just don't let the dragon bite you. Keep your health up and you'll have another Dragon Soul before too long.

Also, its important to note that right before Karthspire is a Karthspire camp that is full of Forlorn enemies. The only ones to really worry about here are the enemies that use ice magic (they one-hit killed me a couple of times, so be very careful).

As an interesting side note, even though I told Delphine to meet me there, she came to my aid as I fought, effectively doing a pincer attack on the camp! Ha! There's also a skillbook here called A Dance in Fire, v2 that helps your Blocking.

After the fight, head over to Karthspire and enter it. There's more forsworn enemies in here, so take them out and loot the place good. Continue further in and you'll be stuck at a bridge with some pillars nearby. To get past this, you need to put the symbol of the Dragonborn on each of the pillars. The symbol you need looks like this:

Once the bridge is down head up the stairs and another puzzle will be in front of you. Here you have to step on only the switches with the Dragonborn symbol . It's really easy, just make your way to the chain in the back and have any companions wait behind for awhile. Once you pull the chain the trap is deactivated.

In here be sure to loot the place, as you can find a leveled unique Blades Sword katana called Dragonbane that does 20 Extra points of damage to dragons (and 10 extra shock damage to anything else). It is located on a table in an atrium just off to the left of the main chamber, along with a full set of Blades armor.

There's also a Skillbook called Mace Etiquette by Dragonbane that ups your One-Handed skill by 1. This place also has a room full of beds and chests, which can be worth looting just for stuff to sell.

After you're done looting, go check out Alduin's Wall with Esbern as he recounts its history. It seems we need to learn a specific shout, but no one has any idea what it could be. Delphine will begrudgingly tell you to go talk to the greybeards about it, ending our current quest and starting the next Main Quest: **** The Throat of the World. 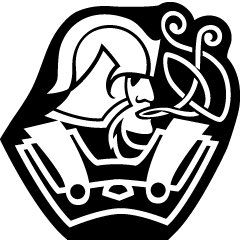