Follow Vilkas as he leads you out to the training yard. Once out at the training yard, Vilkas will tell you to come at him, so do as he says! DON’T use magic here, he’ll just make you attack again if you do. Also, enchanted weapons are a no-go as well. Just hit him several times (all he does is block) and you’ll pass the training. 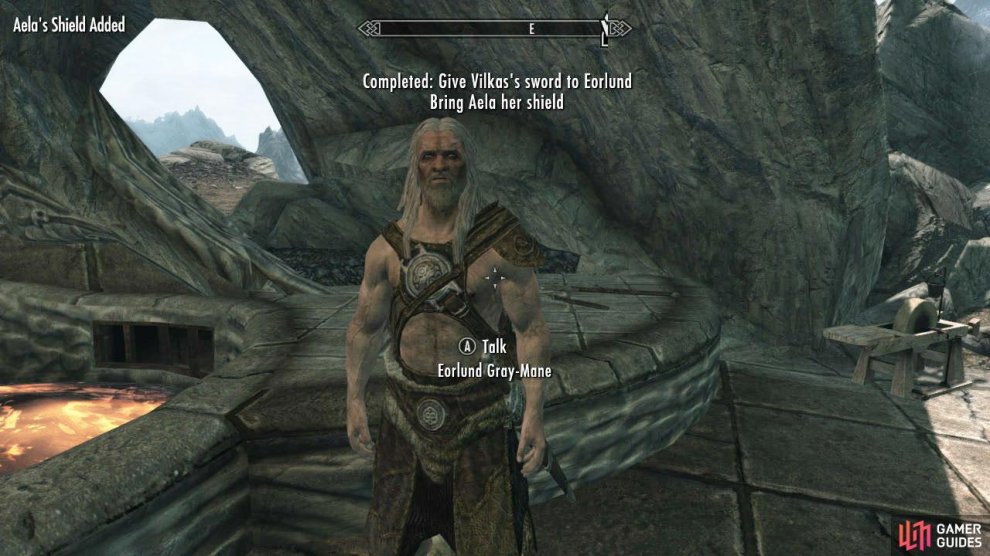 Next Vilkas will give you his sword and tell you to take it to Eorlund to get it sharpened. Eorlund is nearby, up the steps by the Skyforge, the special forge for crafting the Companions weapons and armor. There’s also a Smithing Skillbook here named "The Armorers’ Challenge" , so be sure to read it.

Tell Eorlund you are here with Vilkas’s sword. He will take it and teach you a bit about the Companions: apparently they have no leader. Interesting. He will then ask you to take Aela her shield back, so be a nice guy and do it.

Once you give Aela her shield, she will recognize you. She will call in Farkas and tell him to show you your room. Well, I guess we’re officially part of the group now. On the way back to your room the current quest will deem itself over, and Farkas will eventually ask for your help right here in Whiterun. Say you can handle it to start the quest " Hired Muscle ".