Looks like we’re killing a chef. Moving up in the world, huh? What, no? Oh well. Go talk to Festus who will tell you that no one knows WHO the Gourmet really is, but he found out who might: Anton Virane . Apparently, Anton has a signed book of the Gourmet’s famous cook book "Uncommon Tastes", so we have to go interrogate Anton and than kill him. 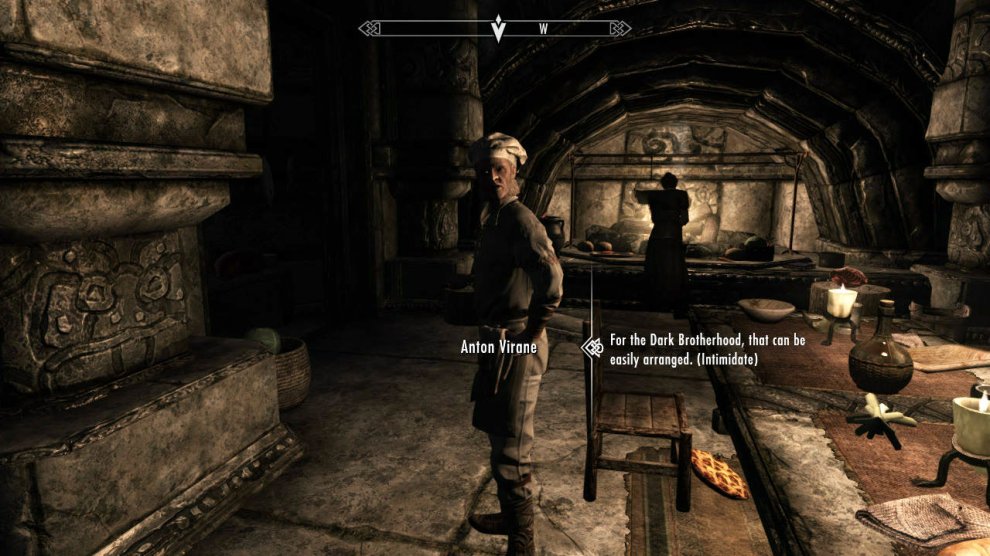 You can question him now, and after a little intimidation Anton will tell you the Gourmet is a man named Balagog gro-Nolob. An orc staying at the Nightgate Inn. Lie to Anton and tell him you’ll leave him alone (so he’ll get back into bed) and then sneak attack him from there.

Time to go to Nightgate Inn. It’s a cozy little inn west of Windhelm, so fast travel to the nearest place nearby if you haven’t been there and make your way there. Go during nighttime and head to the cellar past the innkeepers desk. This cellar is full of barrels and has a special bed where Balagog stays.

You can kill him quite easily here (I actually talked to him to tell him what I was doing, then he ran off behind some barrels. Was he trying to hide?). Take him out and make sure you drag him (HOLD X/A/Use Key) behind some barrels in the cellar to HIDE him. Loot his body for the Writ of Passage. Be sure to also read the SNEAKING SKILLBOOK, "Legend of Krately House" that’s in the room then head back to Festus.

Festus will be quite pleased with you and for the first time may actually LIKE you. Crazy, no? You’ll get a 1000 GOLD reward as well as a ring called the NIGHTWEAVER’S BAND (only if you HID the body) which makes sneaking 10% better AND makes destruction spells 10% cheaper. You’ll also have completed this quest and will have triggered the next one: " To Kill an Empire ".