Warning! This is a lengthy mission through a very long dungeon. Be sure to save often!

Leave the Nightingale HQ. Now you need to go to Irkngthand, which is in the mountains to the west of Windhelm (approach from the west). When you get to the ruins, follow the rather straightforward path while killing the bandits until you enter Irkngthand Arcanex. Inside, you’ll see all the dead bandits. Hmmm, Karliah and Brynjolf perhaps? Either way, go to the southwest corner and follow the path.

Soon enough, you’ll be attacked by some Dwarven Spheres. Go slowly and with any luck you will lure them out one at a time (you want to fight them one at a time if you can, and I’ve seen 2-3 of them show up here). Defeat them and continue on.

Now, in the room after the little pool, follow the path until you see some circular things spitting fire spinning around. As you move through the room, some Dwarven Spiders pop out. Kill them ASAP and proceed through the rest of the room until you get to the next area.

Speak to Karliah and Brynjolf and then proceed. There’s a gate on your left you can pick ( EXPERT ) for a bunch of goodies. In the next room, you can see Mercer at a distance, but can’t get to him. Follow the path until you reach another large area. Head to the east side of the upper area and you’ll find an expert-locked gate. Save and lockpick it. Use the ballista inside to wipe out some enemies. Now; go hit the lever past the gate then quickly return to the start of this room. 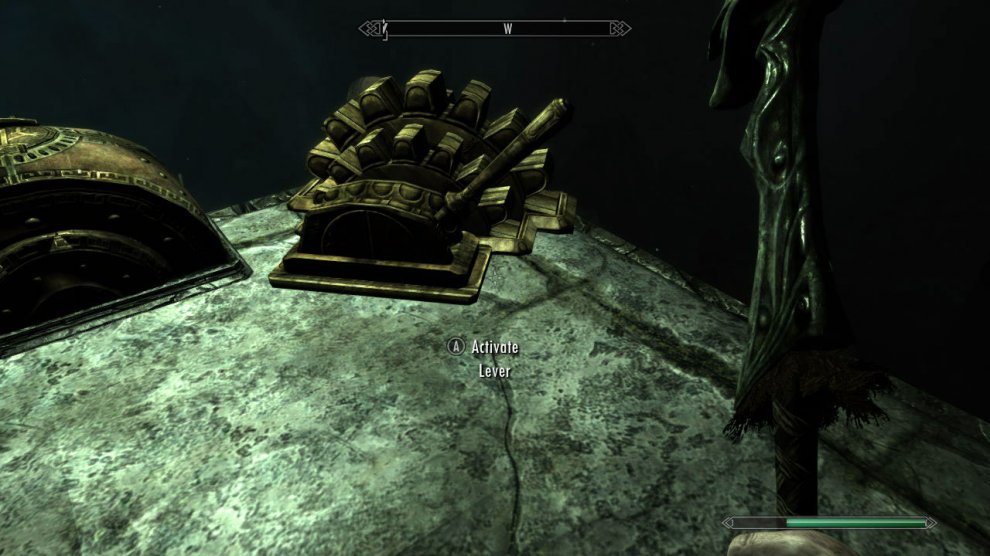 Watch out for traps and soon you’ll be in another large room. This place is huge and run down, with multiple ways to get to the end. Go forwards and kill all the Falmer. You’ll hear a cave-in soon. Once you’ve cleared and looted the area you’ll see that the cave-in was at the back end of the area and was a tower falling down. Karliah thinks it’s Mercer’s work.

Follow the path upwards to a door and go down the stairs disarming traps. The cubby on the right down here has several chests but they are all empty. Be sure to grab the scrolls of detect life in the area and any potions and go through the gate on the left (more traps ahead).

You’ll come to another big room here, with several Falmer down below and a dwarven centurion here as well. What I’d recommend is hitting the centurion at range (using a sneak attack) and the thing will start battling the Falmer. From here you can pick off whoever’s left and continue onwards (the path is very straightforwards). At the far end is more Falmer and spiders, so take them out and continue to the Slave Pens.

In here proceed forwards and take out a dwarven spider. There’s a locked gate up on your right you can pick, even though there’s only ingots up there. Down below is a lever you can turn on to kill some Falmer for you. Turn it on, kill them, then turn it off. The thief on the rack here has a note too!

Continue on and you’ll come to a LARGE Falmer camp. You can either ambush them (there’s easily five enemies here) or try to sneak around on the right, so make your call. The goal is the pen at the end, where there’s two gates (one locked) guarding it. Get to it and continue on.

There’s another open area up ahead. Just kill the Falmer here as they love to watch the only exit to the right. After them you’ll see the pipes rising above another camp. Now these you can use to sneak past everything, dropping down and taking the opening on the left to continue (there’s a chest in one of the tents though). There’s chorus here too… continue on and take out two more Falmer before you’re forced to drop down. There’s a MASTER chest on the right here, so grab it before going through the door and down into the SANCTUARY .

In here, you’ll see Mercer stealing the eyes. Even though it looks like you have the drop on him, he’ll turn around and see you! He’ll than use some sort of shockwave to knock you down below. He’ll rush down and talk to you for a bit while his shockwave causes the place to slowly fill with water. After a bit of a chat, he’ll attack! However, this will be a ONE VS. ONE fight, because the FIRST thing Mercer will do is FRENZY Brynjolf, who will start to attack Karliah.

Mercer is quite a swordsman, and will utterly devastate you given the chance. However, he spends most of this fight being INVISIBLE, and will therefor use HIT AND RUN tactics. Now, we HAVE to know where he is to kill him, so here are several tips: 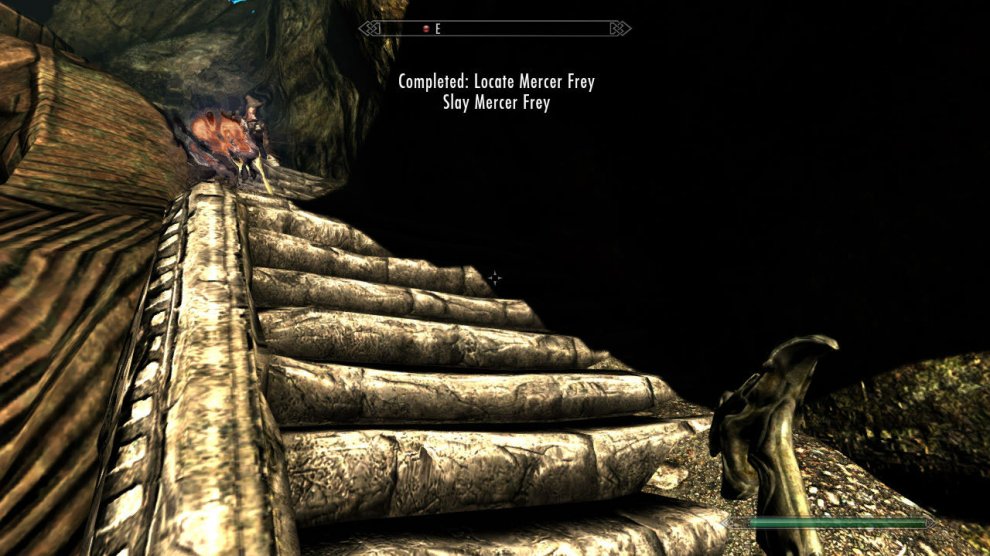 Note: You can use Unrelenting Force lvl 3 to kill him in one hit. Just run up to him (while he’s behind the statue, upstairs) and stand in a way so that his back is turned to the water. After that use your FusRoDah shout, and he should die from fall damage.

Use those tips above to track him and take him out. Don’t be afraid to use some of those potions you’ve been hanging onto as well. After he’s dead, be SURE to loot him. You’ll get T WO FALMER EYES (the gems), 700 Gold , the SKELETON KEY , and a bunch of other goodies. I hope you can carry it all! 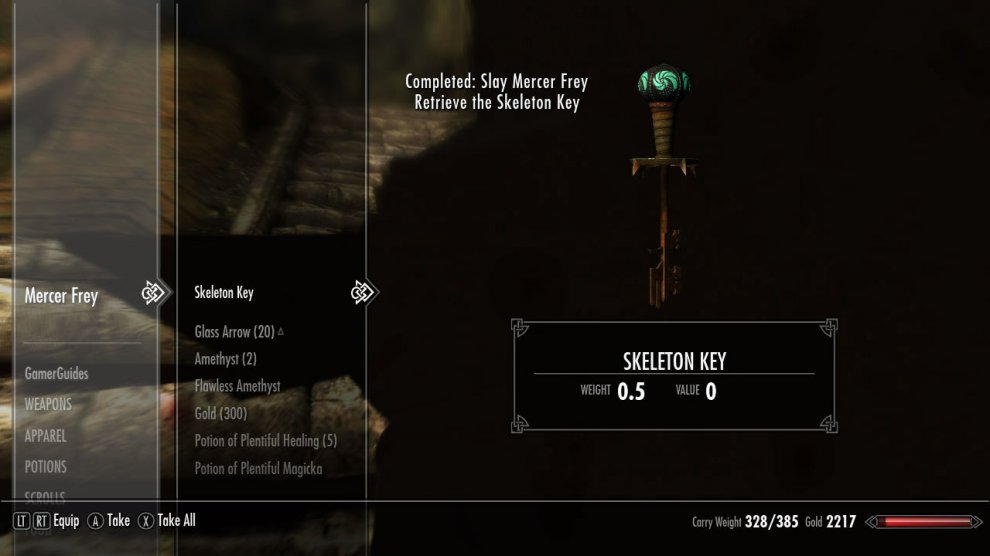 Once he’s dead, the place will REALLY start flooding. At least Brynjolf is no longer trying to kill Karliah. Keep your head above water and wait for the wall near the marker to fall apart and show you your escape route (you’re going to be waiting awhile, as it doesn’t open up until the place is nearly under water, so don’t panic!). Use your newly found escape route to reach the Bronze Water Cave.

Once you’re inside here; talk to Karliah and she’ll tell you your task isn’t quite over: you still have to return the Skeleton Key. And - to top it all off - Brynjolf and herself won’t be able to help you! Sheesh. She will give you her Nocturnal Bow though, as well as completing this quest and starting your next one.