Now, we need to go speak to Mercer. He'll tell you that a man named Gulum-Ei needs shaken down for information, but he tells you to speak to Brynjolf before heading out, so do so. Now we need to go to Solitude to find this Gulum-Ei. Either fast travel there of use the carriage.

Once inside the city; enter the Winking Skeever tavern. You'll find the Argonian inside the tavern. When prompted, bribe him to have him leak info about Goldenglow Estate. After bribing the Argonian, he tells you to bring him some Firebrand Wine, then he'll talk.

Hmmm, I don't like this. Ok, leave the tavern and head east until you reach the Blue Palace. Once inside, go left and in the hallway, pick up the Firebrand Wine case. Easy enough, huh? Return to Gulum-Ei and listen to the chat between you guys.

He then leaves the tavern, so it's time to shadow him. Follow him as far as possible all the way to the harbor southwest of Solitide. The bad thing is that he's very slow. Yeah... Don't approach him too much. He'll go inside a warehouse at the harbor, so follow him inside... 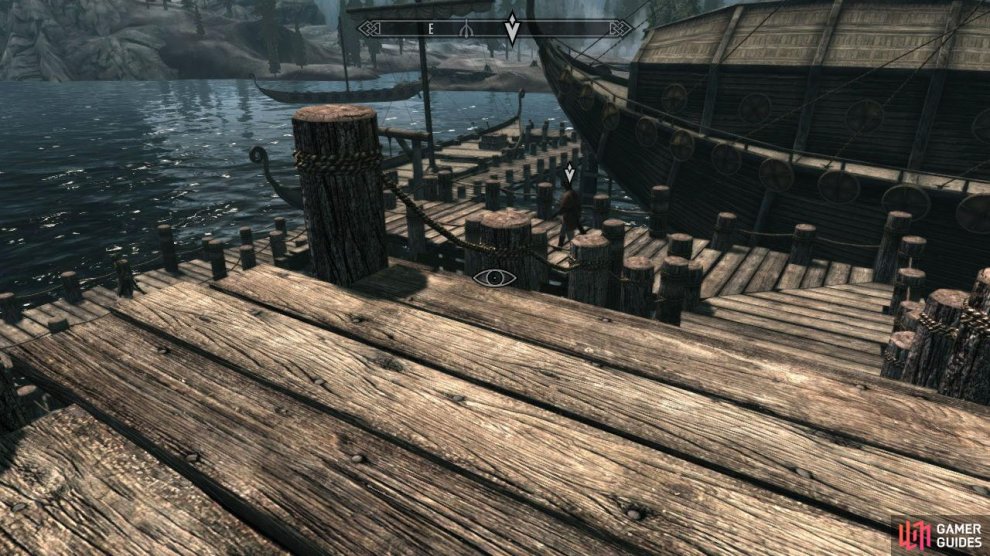 If you jump in the ocean next to the dock, you can find some barrels and a chest on the seafloor.

Once inside, follow him using higher ledges and platforms since there are other soldiers here. Make sure NOT to engage in any battles whatsoever. It's a grand idea to save right now, by the way. If you want to, you can simply swim across to the east side too. Once on the east side, Gulum-Ei tries entering the double doors, then returns and goes east inside Brinewater Grotto. Before following him, go to the northeast corner on the higher ledge and enter the building up here.

Check the desk to find East Empire Shipping Map. Grab all the gold and the Coin Purse. There's also several rings on the desk if you check carefully. Now go back down and avoid the guard. Look for a staircase going down into the water and next to it, another ramp going up behind the boxes. Follow this path to find the entrance to Brinewater Grotto.

Now we get the objective to confront Gulum-Ei. In here, watch out for trip wires that make maces fall down on you. Soon enough, you'll find two bandits on a little dock. Kill them. From here you can either continue through the cave or go through some spider webs to the right. If you go through the webs, you'll have to fight two little Frostbite Spiders and a large one. Following the cave itself leads to two thieves. Either way, you'll get to a part of the cave leading southeast...

Note: Make sure to check the northwest part underwater near the second set of bandits/thieves to find a sunken chest with goodies inside. 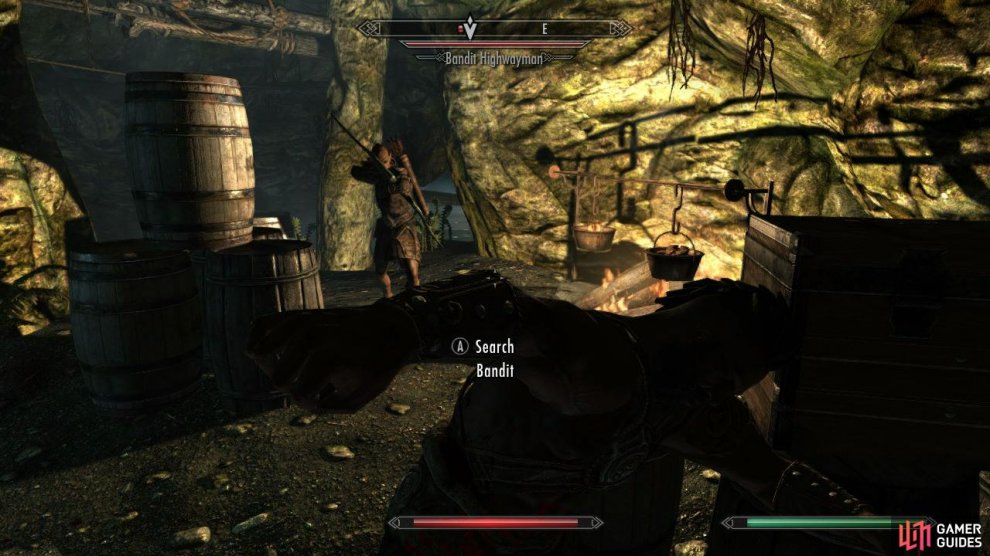 The path leading west is just another path to take here and you'll return to near where you killed the lone thief.

Further ahead, two more Thieves are patrolling the area. Kill them too and soon you'll find Gulum-Ei with another thief at a campfire. Kill the thief and speak to the Argonian. Answer however you want and he'll say the name Karliah. After some talk, we need to get back to Mercer. Thank you Gulum. Now, before leaving, loot all the chests that are here. There are like 4-5, so take everything you can.

Note: You can also opt to kill him. If you do [kill him], you fail the objective to confront him, however your new objective is to search for new information. The arrow points you to a nearby chest to open, and inside there is the deed to Goldenglow Estate as well as a letter from Gulum-Ei to Karliah (the letter is written by Gulum-Ei knowing he would be killed).

It tells you all of the information he would tell you if you confronted him. When you return to Mercer, he yells at you for killing a Thieves Guild agent and doesn't pay you for the mission as punishment.

Note: There are a couple of Expert-locked chests, so save before trying to open them before you break all your lockpicks.

Now hit the middle lever and fight your way past some Horkers to leave the cave fast and bypass the warehouse completely and return to the Guild once you're back on the main map. Speak to Mercer. You'll discover Karliah's location: Snow Veil Sanctum. Our next objective: Follow Mercer and kill Karliah.