Time to go to the cavern. From the plaza we were in the for the last quest, drop southwest into the water and locate the door leading to the Ratway. Inside the sewer, proceed and you’ll find two thugs talking about the guild. You’ll have to kill them, naturally. Proceed further in and when you drop down, you can go two ways. The long way to the west, or go east and try your luck opening the locked Expert door.

Inside this cool looking tavern, locate Brynjolf and speak to him. Tell him you’ll collect on his "Deadbeats" for him and now you got three more objectives. Ask about the other tips on each target and you’ll get three more [Optional] objectives. 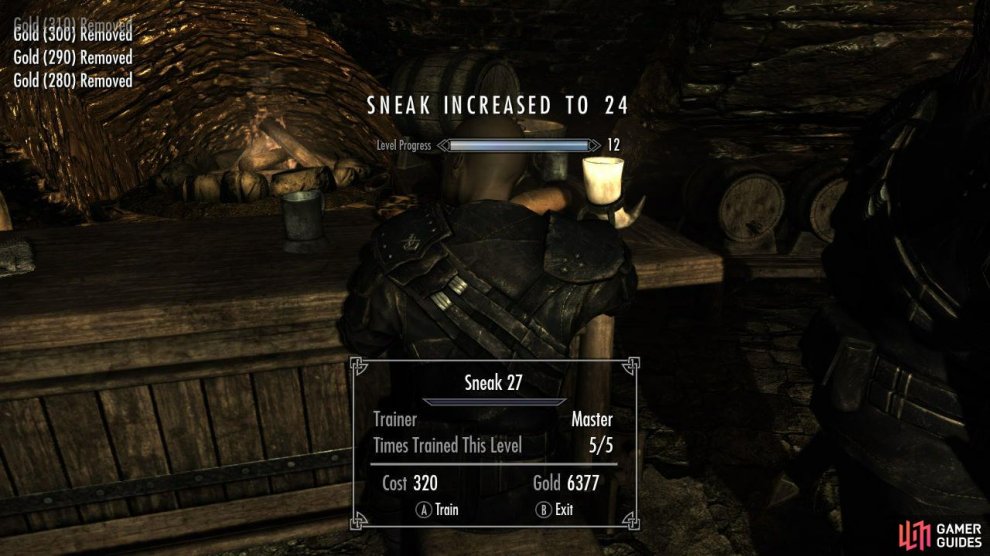 Head over to the Bee and Barb building. Speak to Keevara the Argonian and tell her you have a message for her from Brynjolf. During the chat, tell her that "Don’t say I didn’t warn you" to brawl with her. Beat the living lights out of her and when she’s on the ground, speak to her again and she’ll pay you 100 Gold.

On the other hand; if you don’t wanna brawl with her, speak to the other Argonian here with the marker over his head to learn something intimate about Keerava. Go back and talk to her again and bring up her family and after that, you’ll get the payment.

Step into her Bunkhouse. Same deal. Tell her about Brynjolf and then brawl with her. Afterwards, she’ll get the money for you. On the other hand, if you wanna avoid brawling, go to the southeast corner and look around for the Statue of Dibella. Steal it, then show it to her to get your payment. Oh, you sneaky bastard you.

After you’ve collected from TWO people, the THIRD one will give you the money right away when you bring up Brynjolf’s name. That’s the power of word of mouth!

After you got all 300 Gold, return to the Ratway and speak to Brynjolf. He’ll be pleased if you give him the 300 Gold and there were no casualties. He’ll give you a Poison, a Healing Potion and Fortify Stealth Skill. Keep on speaking with him and you’ll join the Thieves Guild.