The Last of Us
Preparing breadcrumbs…

Collectables on this chapter: (4)

Current Objective: Get power to the locked gate

There are a few weapon parts worth picking up here now (before the Clickers show up here later on). So from where you begin, look right and head to the metal shelving where you can find [1/4 Rag] and [1/2 Explosive] .

You can also find an [Energy Bar] at the end of the wooden table (opposite the operating table), and there's plenty of bricks and bottles lying around too. Keep these here for later though (when you'll actually need to use them).

Current Objective: Turn on the generator

There's nothing else to pick up for now, so look to the left-side of your starting point and approach the open doorway (near the overloaded power-box on the floor). Snatch the [4 x Handgun Bullets] from the doorway, jump over the crate and then over and through the deep water up ahead.

Once you're in the room with the trucks in it, run up the ramp in front of you and on the left you'll find the generator and the optional collectable: the [Generator Note] . Attempting to start the generator will now allow you to pick up the empty red petrol can (found right behind you on the floor).

Current Objective: Find some petrol for the generator

Make sure your handgun is fully reloaded as things are about to heat up in here. There's NO petrol in the first truck in front of you (that'd be too easy), so you need to head to the petrol tank of the truck further up. However; passing the front of the first truck triggers off two Stalkers to appear (one nearby on your left and another up past the second truck).

Killing either Stalker will alarm a further two to jump into the water with you (just to make it even more interesting), so we're going to employ a cheeky tactic to make our lives somewhat easier here (as it can be tough if you're not careful).

Firstly, hide behind the crate in the water (that's in between the truck and the generator) and make sure your back is facing the way you came in. The first Stalker will pass you by, allowing you to save ammo and stab it in its fungi-filled face. 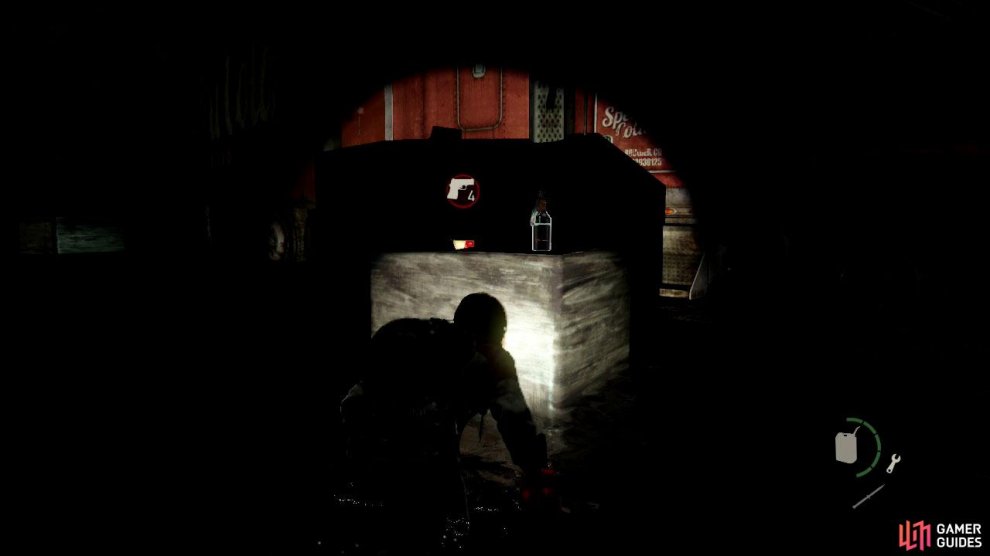 Quickly search its corpse for any handgun bullets it's likely to drop and then immediately make a dash back to the door you came in from (it'll be to your right, in the corner). What you'll find is that the Stalkers will come right up to the open doorway but will not cross over it !

This allows you to lure them to the doorway (by stepping over into the bigger room briefly) and then swiftly retreating back to the wall. Be careful not to get too close though as they'll still try and claw your face off if you do! With all Stalkers taken care of, you can run to the petrol tank, on the farthest away truck, and siphon it off into the petrol can. Bring it back to the generator, start it by pressing Triangle three times (when the line is at the bottom) and then open up the metal gate that's now powered up behind you.

Current Objective: Head back to the electronic gates near the helicopter

With the water currently being less-than-friendly to your health, climb up the ladder and, carefully, drop down to find [3 x Handgun Bullets] and [1 x Molotov] . Climb back up and then crawl over the left-hand metal air vent until you reach the barrier.

Climb over the top and then when you see the truck below you, drop down to the right and then crawl onto the truck's bonnet for a [1/4 Rag] and [1/2 Alcohol] . Get yourself back onto the air vent, and drop down the other side of the truck now.

In the back of the truck you siphoned the fuel from, there's an [Energy Bar] and (for those of you playing on Normal or Easy difficulties) a [Food Can] as well.

Jump over the barricade nearby and you should see two shutters with a green switch beside each. Hit the right-hand switch first and inside you'll find a [3/4 Explosive] and [1/4 Rag] . Climb up the stack of boxes in between the doors; run over the top of the shutter and then crawl around until you drop down to the ground at the other side. Look left for [6 x Handgun Bullets] and a brick (should you be missing one from your collection). Hit the green button by the door to enter another Clicker packed area.

There are Five infected in the next area, so you’ll want to approach each one methodically if you’re looking to kill them all (and seeing as they’ll sometimes drop weapon parts when they die, it’s worth doing).

Wait for the infected that’s walking around (the one closest to you just now), to pass through the room you’re in and back out into the main part of the shop. Now sneak up on the infected standing there and knife him for an instant kill. Pick up the [1/4 Alcohol] from the shelving beside it too. 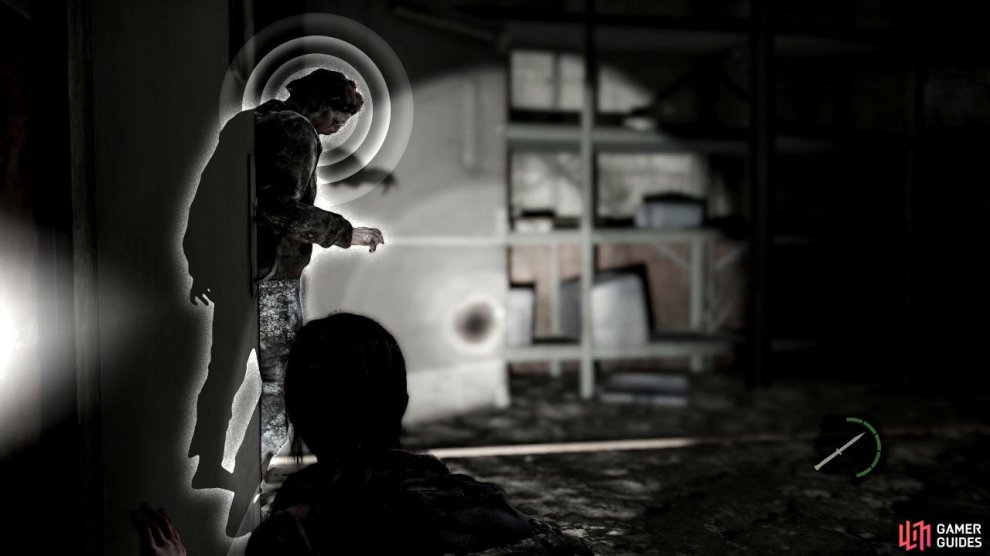 In the final part of the store, there are two infected just standing around (making them easy kills), but it’s the walking infected you need to be careful about. He walks a set path around the room (in a constant loop), so we’ll tell you the best time to kill all three infected without alerting any of them.

Infected 1 (Closest): Wait for the walking infected to be in the top-right corner of the room before knifing the one closest to you in the neck from behind.

Infected 2 (Standing by shop exit): Now sneak around the right-hand side of the store and wait for the walking infected to be on the far-left before you stab the second infected by the exit from behind.

Final Infected (Walker): Wait for it to be standing near the Frozen Food shelving and then approach it from behind for a quick and easy kill. Before leaving though, grab the [1/4 Scissor] from behind the counter and then lift up the shutter to exit the store.

Crouch walk forwards until you hear Ellie announce the arrival of two Clickers so let’s make short work of them. 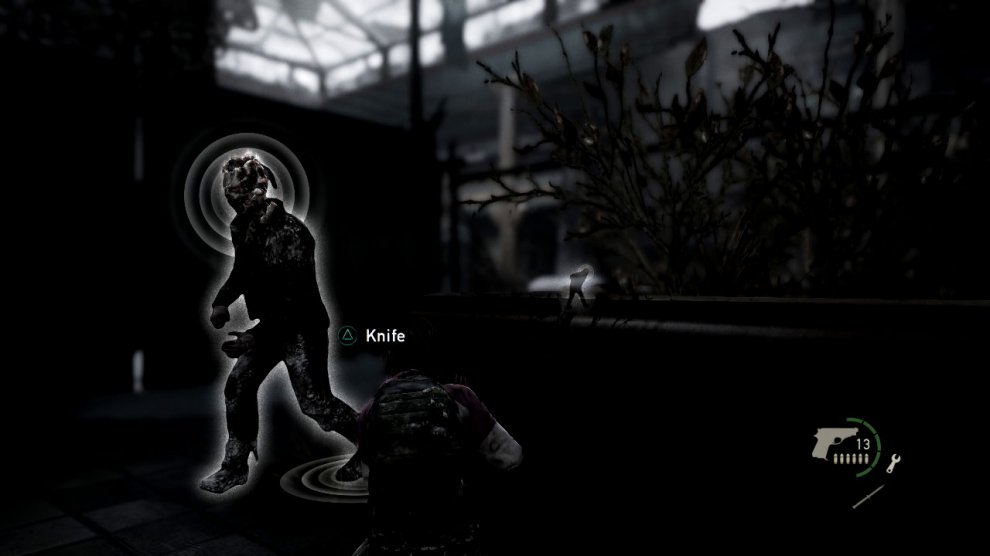 For the second Clicker start a crouched sprint around the back left of the room (through the tent area) and then you’ll re-emerge opposite the triangular notice board. Pick up a nearby brick/bottle and then wait by the far end until the Clicker makes a pass in front of the closed gate.

Throw your brick or bottle at its ugly face and then dash in whilst pressing Triangle to get a guaranteed kill in. You’re now free to open the electronic gate without fear of death so proceed up the escalators and hang a left. In the middle of the tents to your left is the next collectable, the [Atrium Recorder] .

It’s now a simple dash towards the helicopter, where you need to climb up the glass panels and jump across to the helicopter to finish the third chapter.