Chapter 5 - The Enemy of My Enemy

Advanced Warning: You’ll be going up against a lot of humans in this chapter, so make sure your human combat skills are up to par. We’ll give you rock-solid strategies for every encounter; but you still need to be quick on the joypad if you want to stay alive.

Current Objective: Get back to Joel

Once you’re on the ground begin by running forwards and look for an opening in the white boards to your right (it’s surprisingly easy to miss). Nip inside and in the top-left corner is a corpse and the next collectable for you, the Crew Photo .

Head back into the hallway and get ready for your first human battle as soon as you jump over the barrier in front of the shops. One of the humans will be killed by an infected, so you can safely press Triangle to grab the bow and arrows that land – ever so conveniently – by your feet.

You need to be fairly quick, but this strategy worked every time we tried it, so if you follow it the battle will be super easy. Immediately train you arrow onto the back of the human on the right side of the screen. Shoot him in the back for an instant kill (and increase your odds of getting your arrow back intact).

Now quickly crouch walk over the corpse in front of you and pick up the [3 x Arrows] from the ground. Stop in front of the shop’s doorway and turn left (whilst drawing your bow) and shoot the guy walking into the store with his back to you. 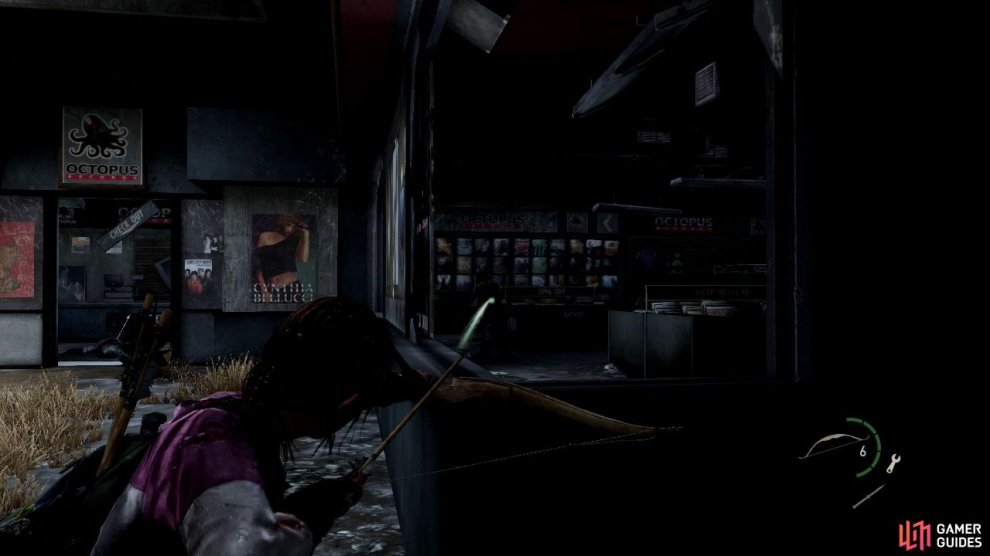 Inside you’ll find: [1/4 Sugar] and an [Energy Bar] (by the south-side till) and by the northern till you can open the drawer under the till for [2 x Handgun Bullets] and an [Energy Bar] . Head on outside and look by the corner wall in between the public toilets for [1/4 Rag] and [1/2 Alcohol] . 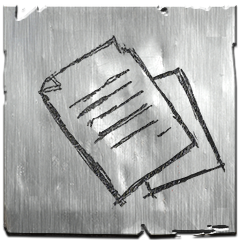 Make your way out of the air duct and get ready for your first Infected + Human encounter of the DLC. Like always, save yourself ammo, health and time by getting the two groups to fight each other. You can do this easily by picking up a brick and throwing it down to the far-end of the left-side of the shop.

This’ll spring the infected into life and trigger off a battle between them and the humans in the store who are looking for you. It’s now a very simple case of using any remaining bricks to create a trap for the remaining infected. Just throw one a bit closer to you (but still a bit down the shop) and use your arrows to shoot them in the chest/back one at a time.

Once they’ve all been taken care of, it’s time to loot the place for some much needed parts! Directly below you’ll find [1/4 Rag] and [1/4 Alcohol] . Just up ahead (in the middle of the store), you’ll also find [1/4 Scissors] and [1 x Arrow] . The shop’s littered with bricks and bottles as well if you need one. Just outside the shop (beside the Colorado Mountain Plaza stall, there’s also [1/4 Sugar] resting on the ground.

Climb up the debris on your right and don’t forget to pick up the [1/4 Rag] and [1/4 Alcohol] as well. It’s almost as if they’re trying to prepare you for an upcoming battle or something...

It’s time for another ‘Humans versus Infected versus Ellie’ encounter; so once again let’s use our brains and have the infected do most of the work for us. Once you drop down into the store, grab the [1/4 Explosive] and [Energy Bar] (if you need it), crouch walk down the stairs and pick up a bottle from the ground. 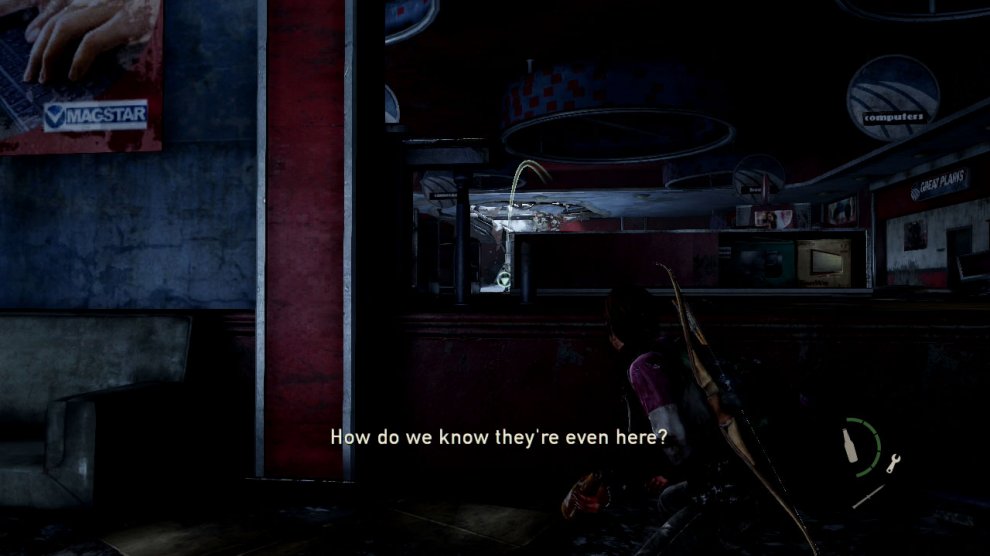 The numbers of Infected killed will be random each time, sadly, so you need to pick the remaining Infected/Clickers off one-by-one (preferably using your bow or a brick + running knife to their face combo if you’re feeling brave).

With the coast clear, nip inside the office area at the back and open all of the lockers to find: [1/4 Explosive] , [2 x 1/4 Rag] , [1/4 Alcohol] and [1/4 Scissors] . There’s also [1/4 Sugar] tucked away on the other side of the store (just down a small set of stairs). Finally; head to the till area near the fallen debris (aka: your exit) and raid the drawer under the till for [1/4 Explosive] and [2 x Handgun Bullets] . With the looting complete, leave the store by climbing up the debris to the upper floor.

Once you’re on the upper floor, hang a left and pilfer the [1/4 Scissors] from beside the till and use this final opportunity to craft any weapons you can before lifting the shutter (as we’re approaching the end of the chapter).

Once you’re back in the mall itself, it’s time to prepare yourself for the last major battle of the game (luckily we’ve done the hard work for you and figured out a solid plan to see you through it). So let’s begin by pocketing the [3 x Arrows] and [2 x Handgun Bullets] from the human corpses just up ahead.

Warning! You can’t take forever in the final battle of the DLC as the humans will eventually open the padlock and kill Joel! So if you follow our rock-solid strategy below; you’ll reach Joel with time to spare.

Now for the first part you’ll need to be pretty quick with the bow and arrows; but you’ll make life much easier when you nail it. So draw your bow and as you crawl forwards slowly, wait for the first human to run to the top of the escalator and hit him in the back with an arrow. Now immediately draw a second arrow as you turn right and hit the guy here in his back as it starts to turn right and walk away. 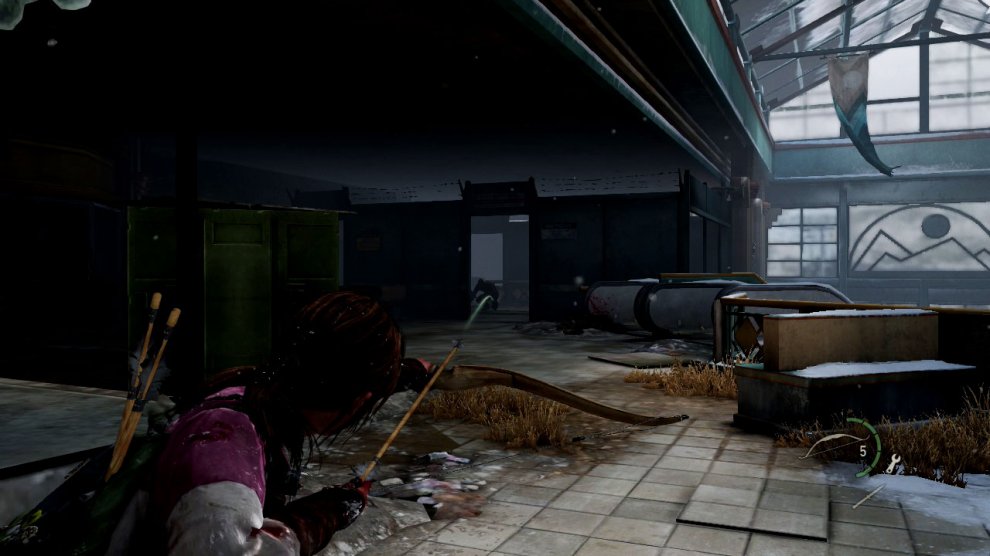 Now draw a fourth arrow and aim it at the guy who’s still trying to unlock the padlock and quickly crouch walk away after firing so you’re not detected. If you crouch walk over to the body on your right you can fill your pockets with the [Food Can] , [4 x Handgun Bullets] and [4 x Arrows] .

Use your hearing ability to see if there’s a human in the shop just up ahead on the top floor (there should be). If you quickly crouch-walk over to the open window on the right of the entrance, you can get the drop of the human as he walks through it, giving you an easy kill by pressing Triangle .

With him out of the way, quickly double-back on yourself and look for the two guys now in the far distance across from you. At this distance you can either ‘lead’ your shot (i.e. fire just ahead of where the enemy is walking so they basically walk ‘into’ the arrows path), or you can spend one arrow to just miss them, forcing them to stop and buying you some time to line up a killer shot.

Now use your hearing and debris here to work your way to the remaining target that’s looking for you up here. Knife him from behind and that leaves just two left on the lower floor; so wait for them to separate and pick them off one at a time with your remaining arrows.

Before you head downstairs to Joel’s location, take your time now to pick up all items (whilst it’s still safe to do so – because it won’t be in a minute – HINT, HINT!).

Run to the crates behind the statue in the Atrium itself and you’ll find [1/4 Alcohol] and [2 x Handgun Bullets] . From here, head left and in front of you will be [1/4 Alcohol] and [1/4 Rag] . Finally; climb up the crates in front of you to the upper floor and you’ll find [4 x Handgun Bullets] , a [Food Can] , [3/4 Explosive] and then any additional bullets or arrows dropped by the dead guys up here.

Craft anything you can now (as this is your last real chance to do so) and proceed downstairs to the shutter. Press Triangle and the next part of this battle will now commence. 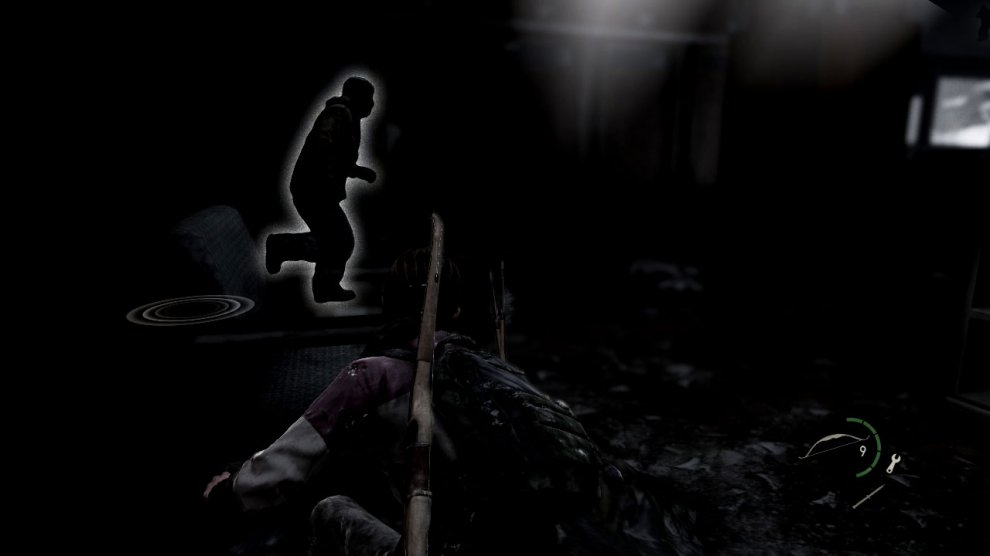 Return to the same spot beside the stairs and wait a minute or two longer for the next guy to come downstairs to look for his friend. Don’t be rude and show him the point of your blade from behind as well.

Sneak upstairs and watch out for any guys hiding in the dark up here (we almost didn’t spot the guy hiding up here with his back to us)! When this room is clear, draw an arrow and hit the guy standing outside in the chest with an arrow (he’ll drop a Hunting Rifle ).

Once you hear someone say “someone get on the door!” you know you’ve reached the end of this part.

Start by drawing another arrow and hitting one of the guys by the shutter and killing him will trigger the arrival of multiple Infected types to the Atrium. Let the Infected attack the remaining humans on the lower floor (and pick off anyone who’s stupid enough to come upstairs). 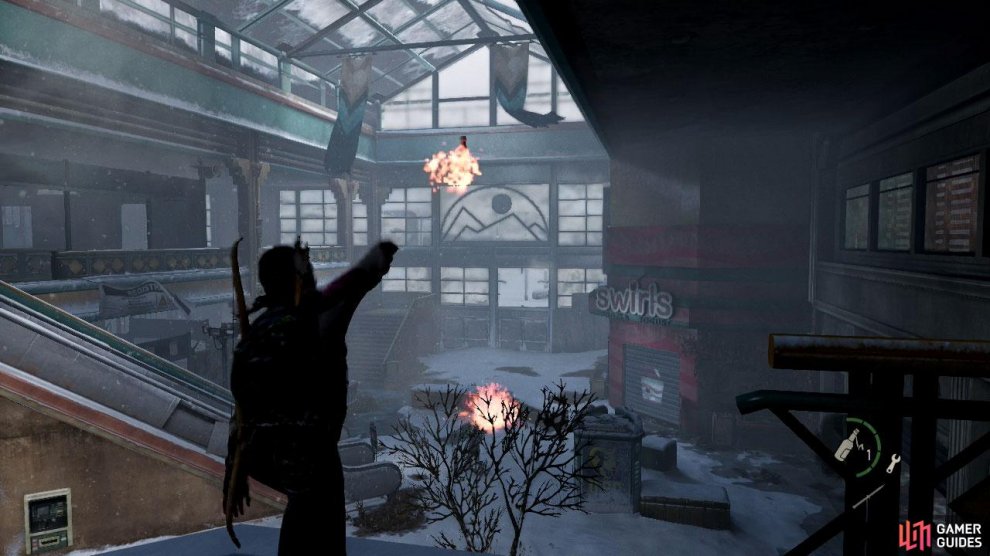 Now it’s a much simpler case of stalking down any remaining Infected (by using your hearing skill) and either use your arrows or pick up the dropped Hunting Rifle nearby and drop them from long-range with a bang. Ellie will signal that the coast is clear; allowing you to open the shutter and finish this lengthy chapter once and for all.