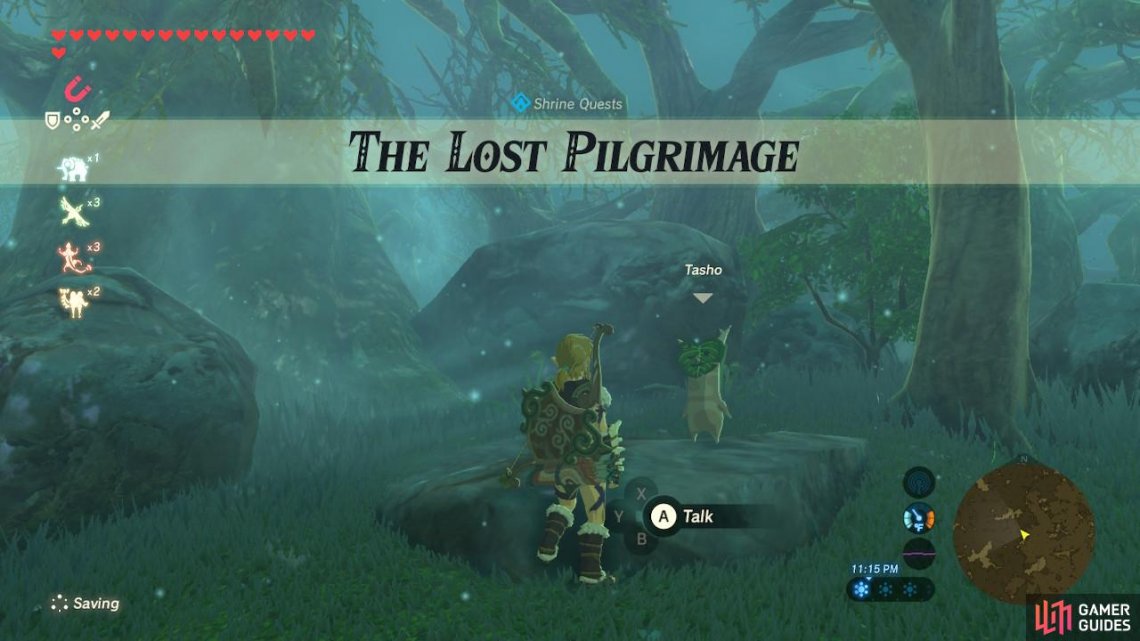 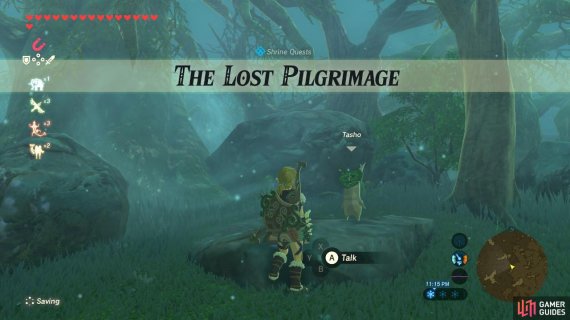 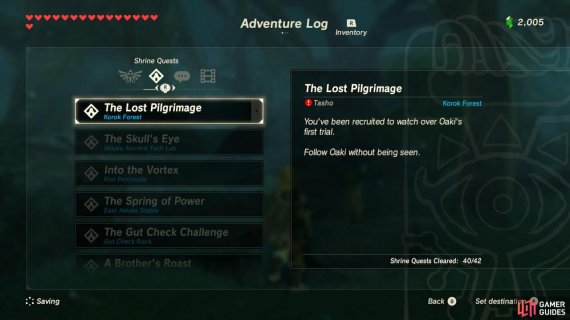 This is one of the three Korok trials (left), The core point of this Shrine Quest is stealth, so have stealth armor or stealth elixirs/food (right)

This Shrine Quest is one of the three trials related to the sidequest “The Korok Trials”, which you can learn more about here. Before we embark on this though, you will really, really want to have the full stealth armor set that you can buy in Kakariko Village. Either that, or have a healthy supply of foods and/or Elixirs that will max out your stealth. This Shrine Quest is an utter pain without stealth boosters, so go get that and then we can start. 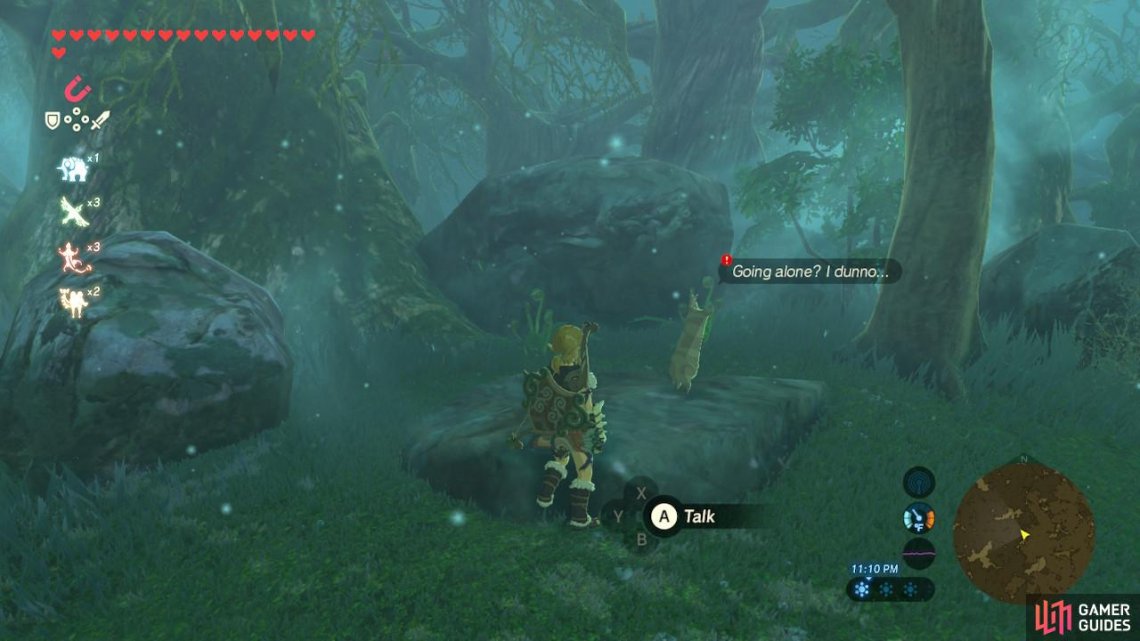 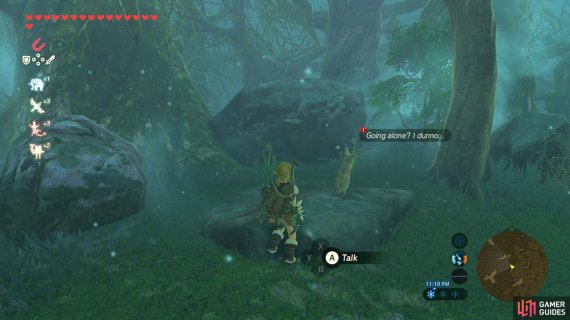 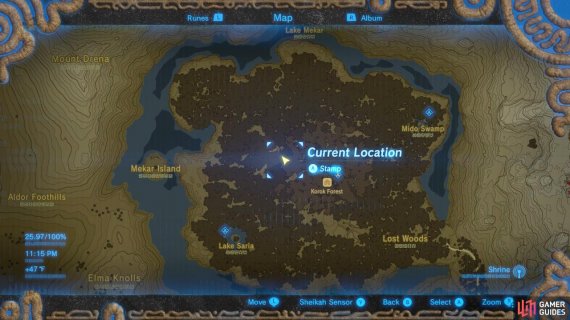 Talk to this lonely Korok in the Lost Woods (left), The location is northwest of the Korok Forest (right)

Have your stealth armor? Or a maxed out food inventory stuffed with stealth Elixirs? Great! From Korok Forest, find a narrow path marked by an archway in the northwest of the forest. Follow it until you find a Korok standing all alone. This is Tasho. Tasho will ask you a favor: Follow Oaki, a small Korok child who is also doing a Korok trial. Tasho is worried about Oaki so let’s do a favor. This is why you will want stealth. Oaki is nervous and skittery and will also get angry if you get too close and are spotted. 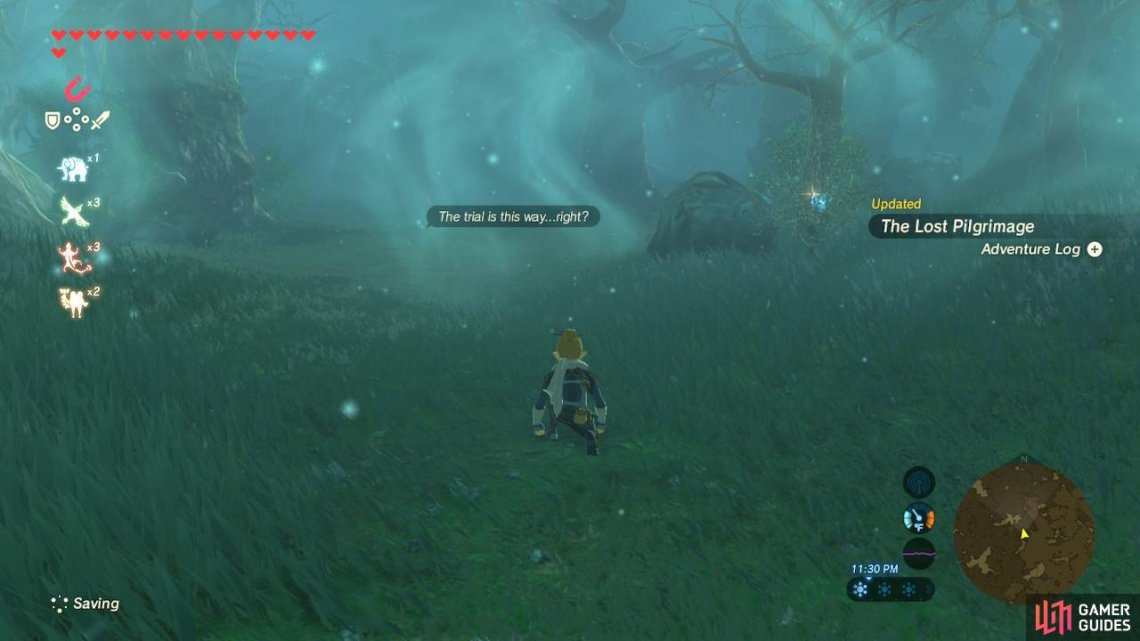 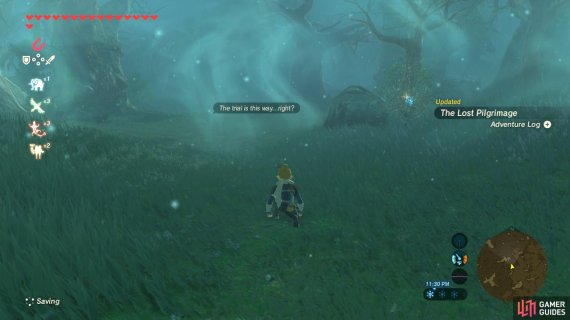 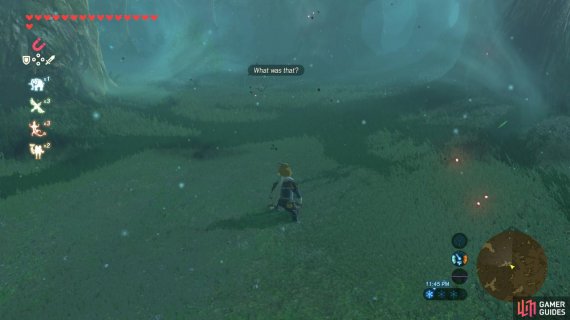 Follow Oaki using the speech bubbles (left), As you can see, Oaki is very nervous and easily scared (right)

What can make this Shrine Quest especially frustrating is that Oaki is basically the same size and color as the grass of the forest. The constant mist of Lost Woods doesn’t help either. Thankfully, Oaki also seems to be pretty chatty, so you can use the speech bubbles to position yourself. 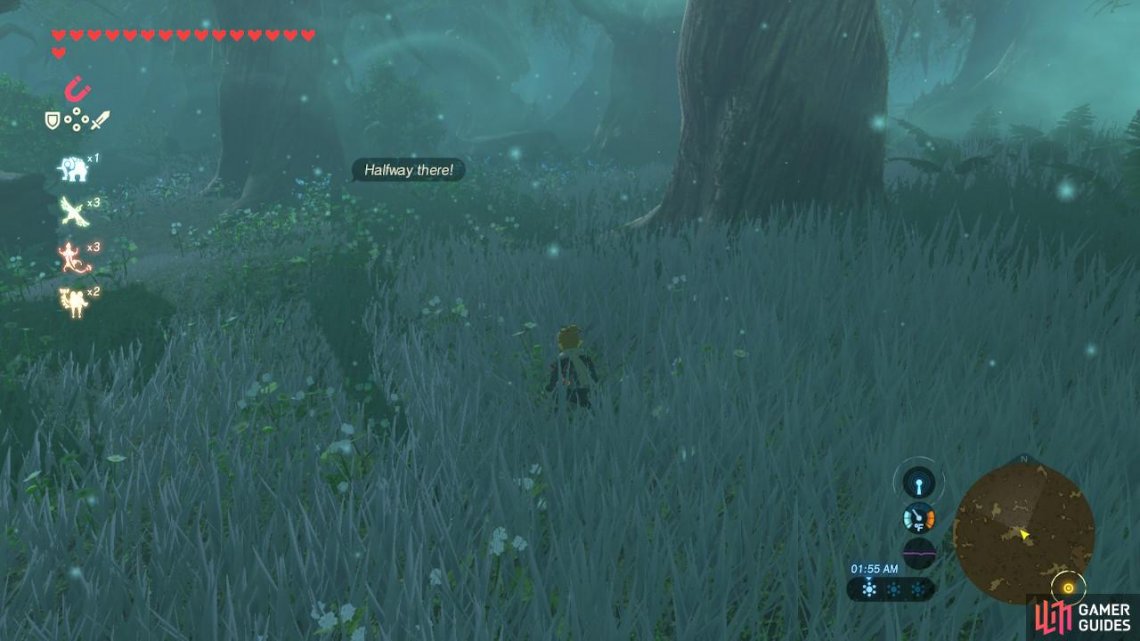 (1 of 3) If you see Oaki saying this, you’re doing perfectly

Nothing too major will happen during the first half of Oaki’s trial. Simply keep your distance and always remain crouched. Once you both are close to a hollow log, Oaki will happily mention being halfway there. Once Oaki has exited the log, you must stay inside the log, hiding behind the wall while peeking out to keep track of Oaki’s position. Do not follow Oaki! 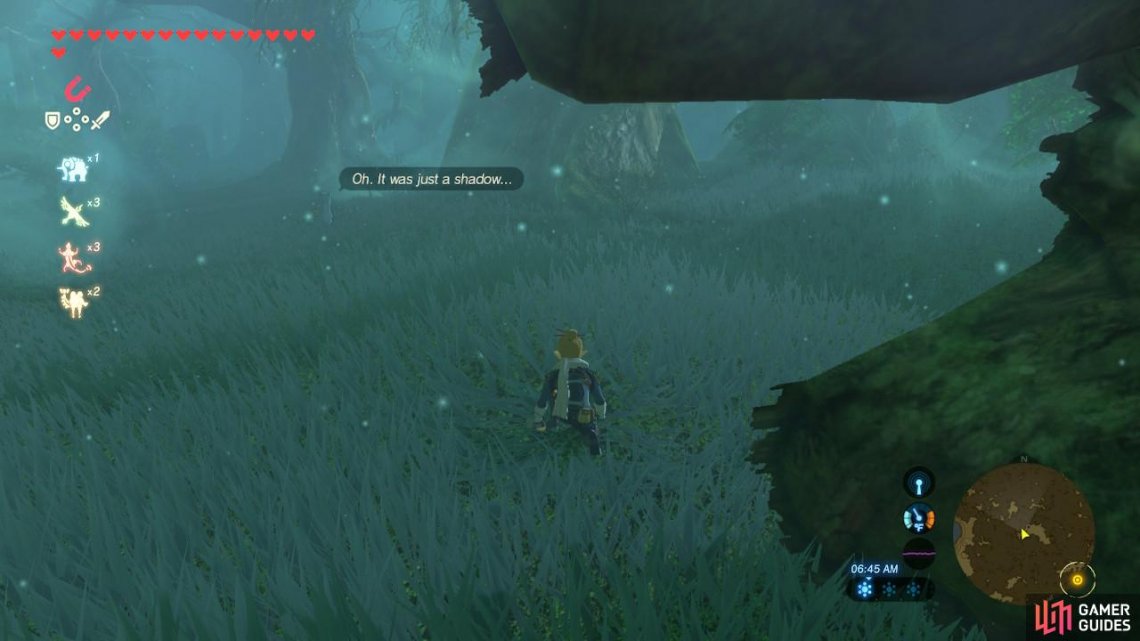 A few seconds after this, Oaki will suddenly freak out and run backwards. This is why you must stay hidden in the log. If you were to follow Oaki, you would be spotted and have to start over. Wait another few seconds and then Oaki will turn around and continue. 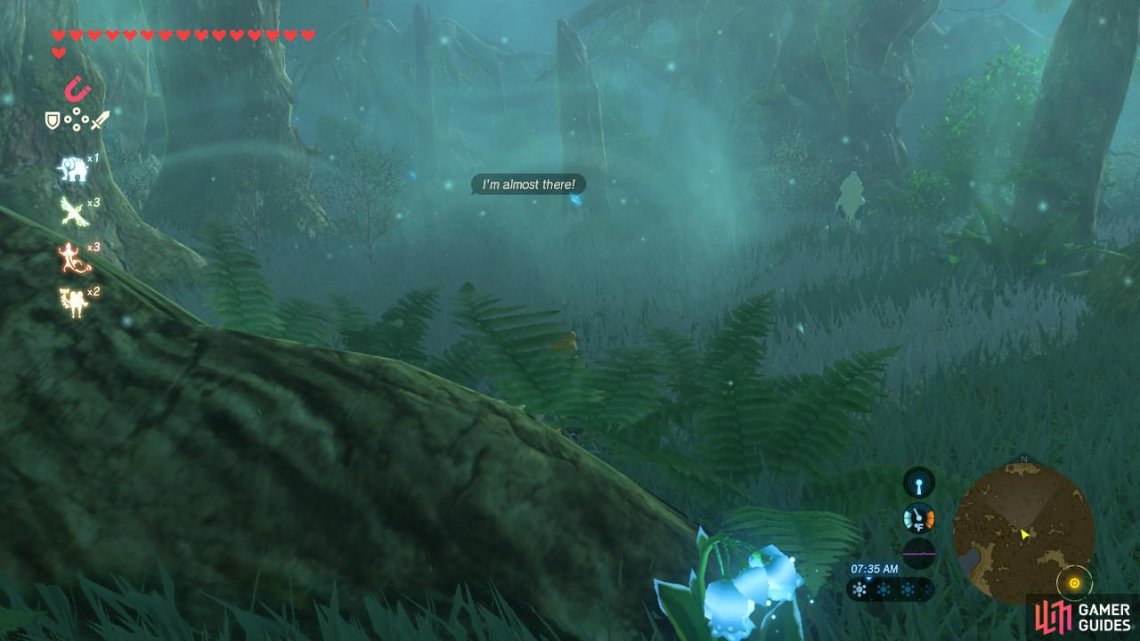 Further down the path, you will pass by a wolf. It will howl and run around you and Oaki. Ignore the wolf. Fighting it will only draw attention. If it decides to bother Oaki, you have to refrain from intervening or else you will start the whole ordeal over again. 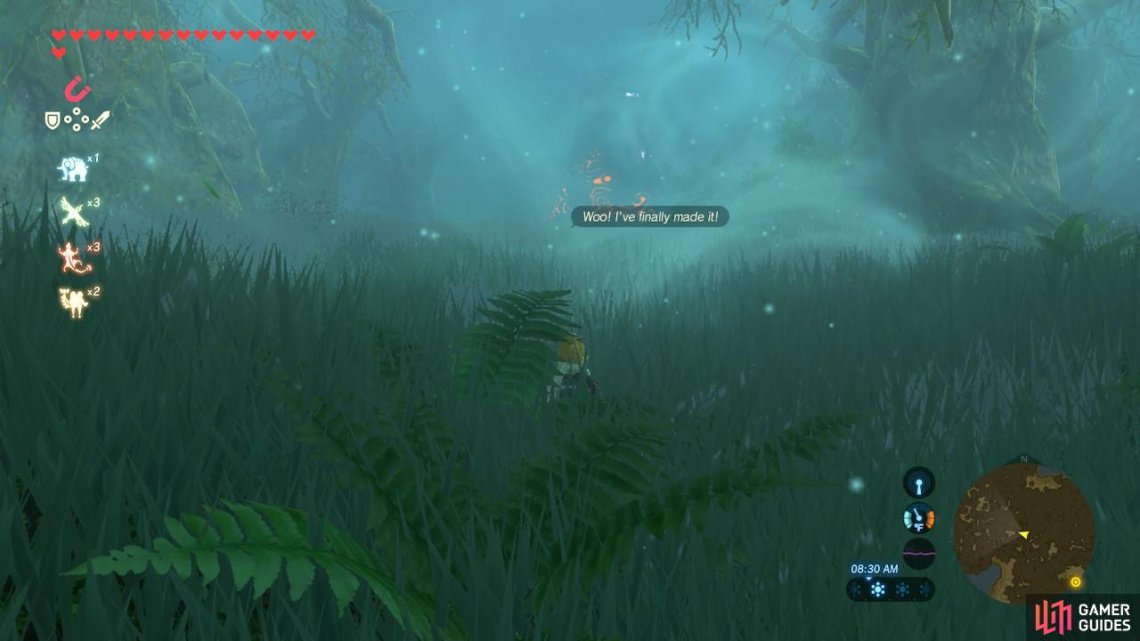 (1 of 2) Once Oaki says this and jumps up and down, you can come out and show yourself 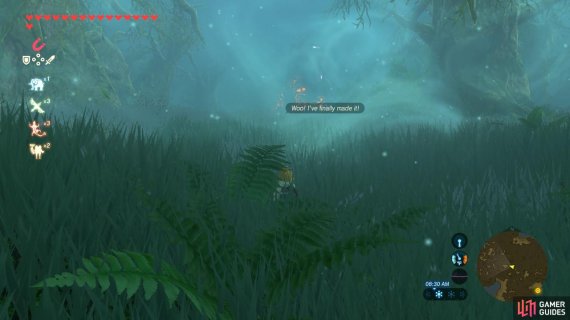 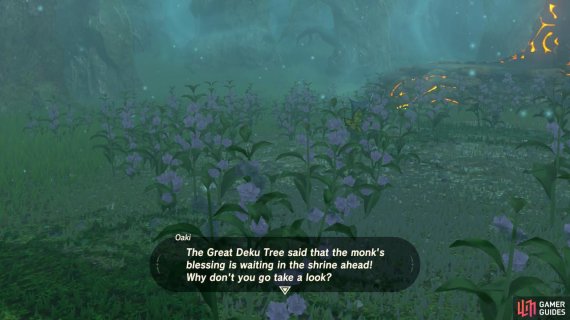 Once Oaki says this and jumps up and down, you can come out and show yourself (left), Oaki will show you the Shrine, which you can activate now (right)

You will eventually reach the Shrine, deep in the woods. Oaki will come to a stopping point at the Shrine’s pedestal and will jump up and down happily. At this point you can make yourself known. Oaki will tell you about this Shrine and at this point, you have completed the Shrine Quest. You are free to activate the Daag Chokah Shrine.