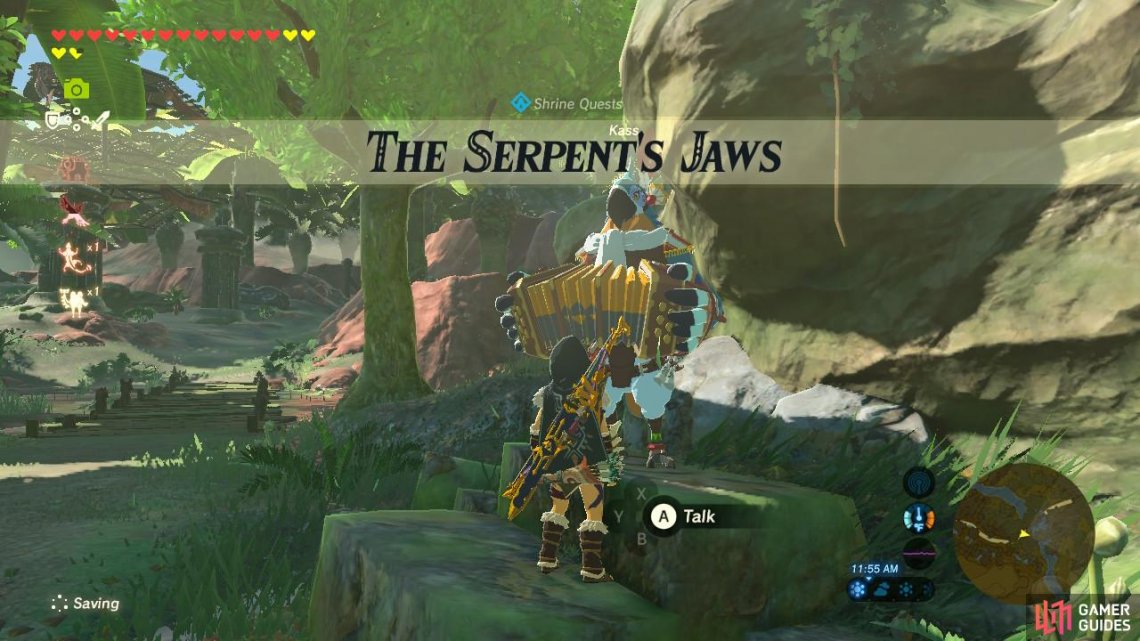 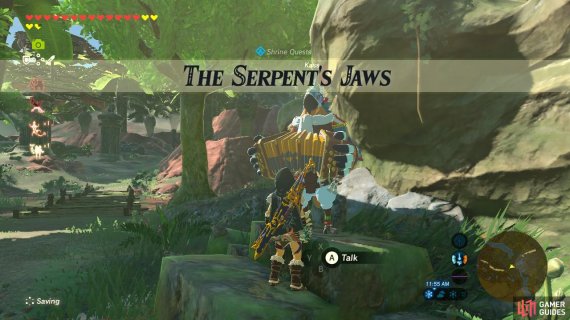 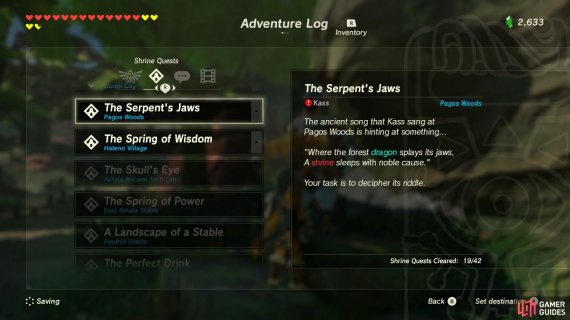 This Shrine Quest deals with one of the three sacred springs in Hyrule (left), In this case, it involves the Spring of Power (right) 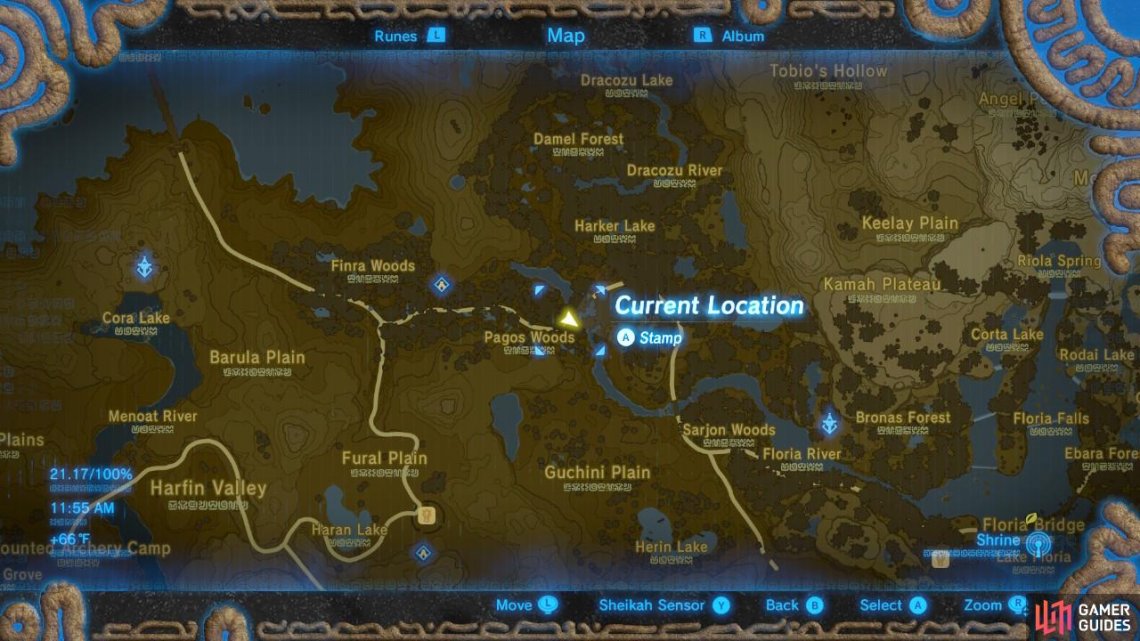 Kass is playing the accordion deep inside Pagos Woods. It is in the Lake region and he is right next to the footpath, so you won’t have to wander around much to find him. He will play you a song about the Spring of Power. 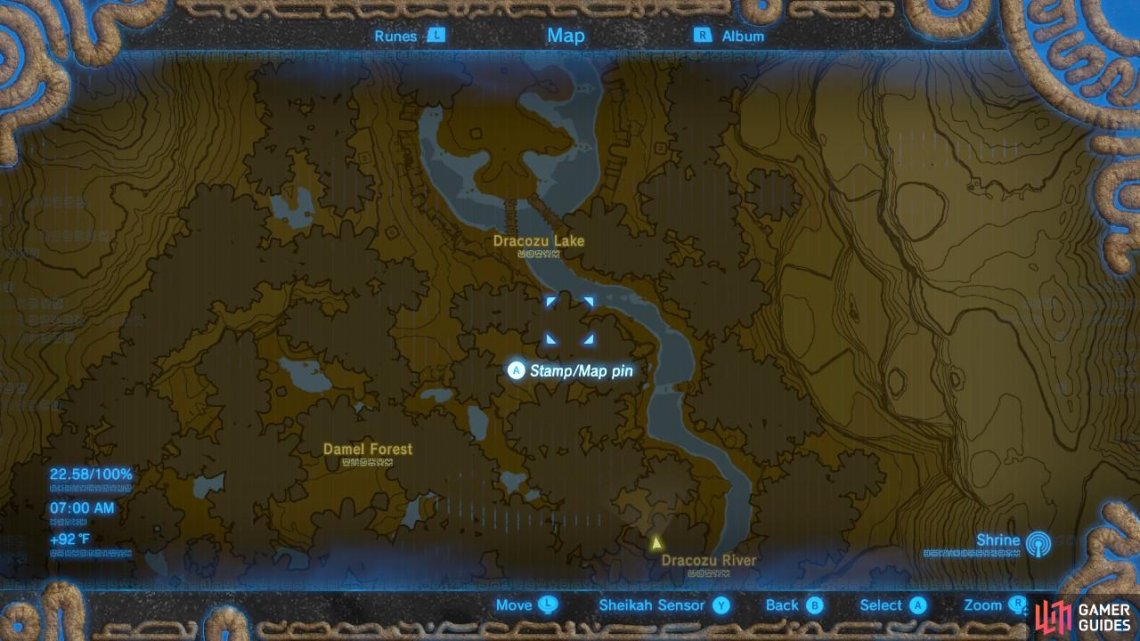 The location in question that you will want to journey to is in Dracozu Lake northeast of where Kass is standing. You can follow the Dracozu River which leads to a lake that is shaped like a snake’s open jaws. The Spring of Power is located directly north of the open jaws. 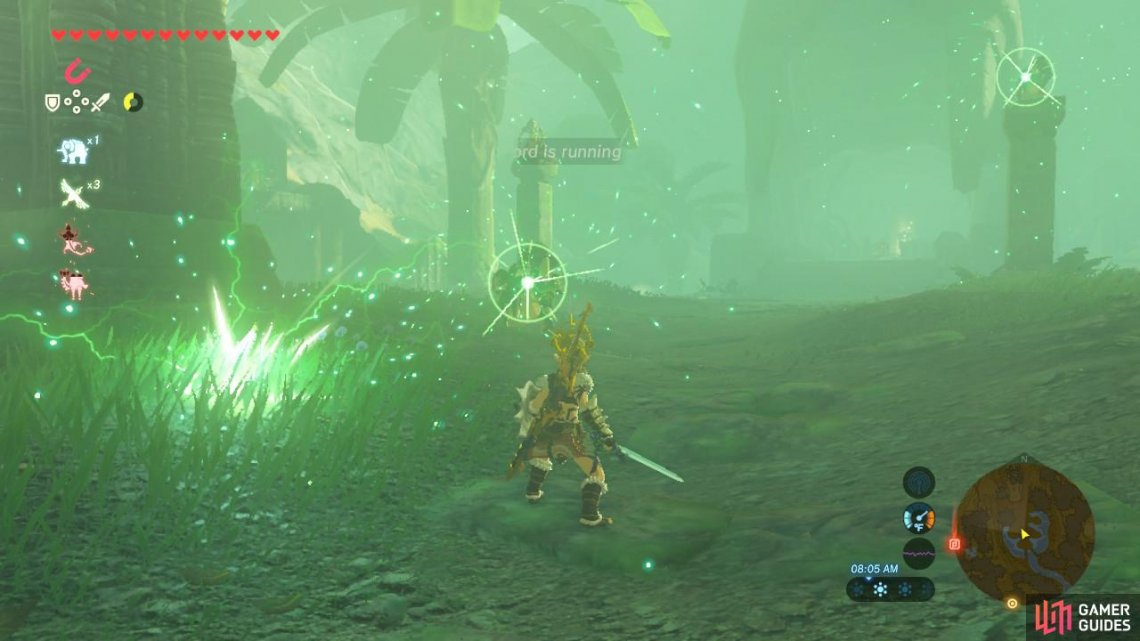 (1 of 2) Be wary of the Lizalfos shooting Shock Arrows 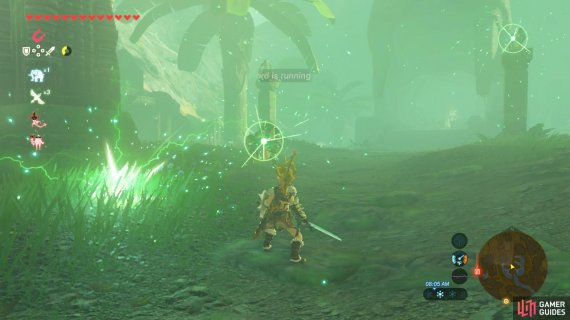 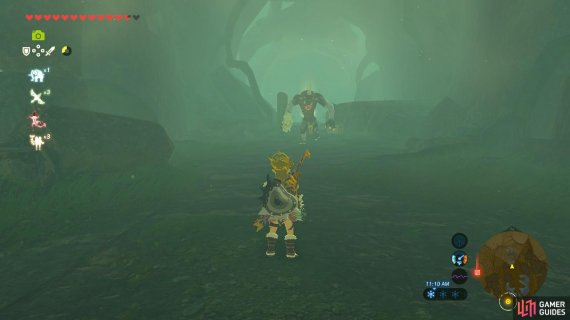 Be wary of the Lizalfos shooting Shock Arrows (left), A Moblin sits right in the middle of the Spring of Power (right)

There will be a camp of Shock Arrow wielding Lizalfos that will greet you as you enter. Take them all out so you can have yourself some peace. As you go up the well-worn stairs, there is also a Moblin that calls the place its turf. Wipe it out so that you can safely approach the Goddess Statue within. 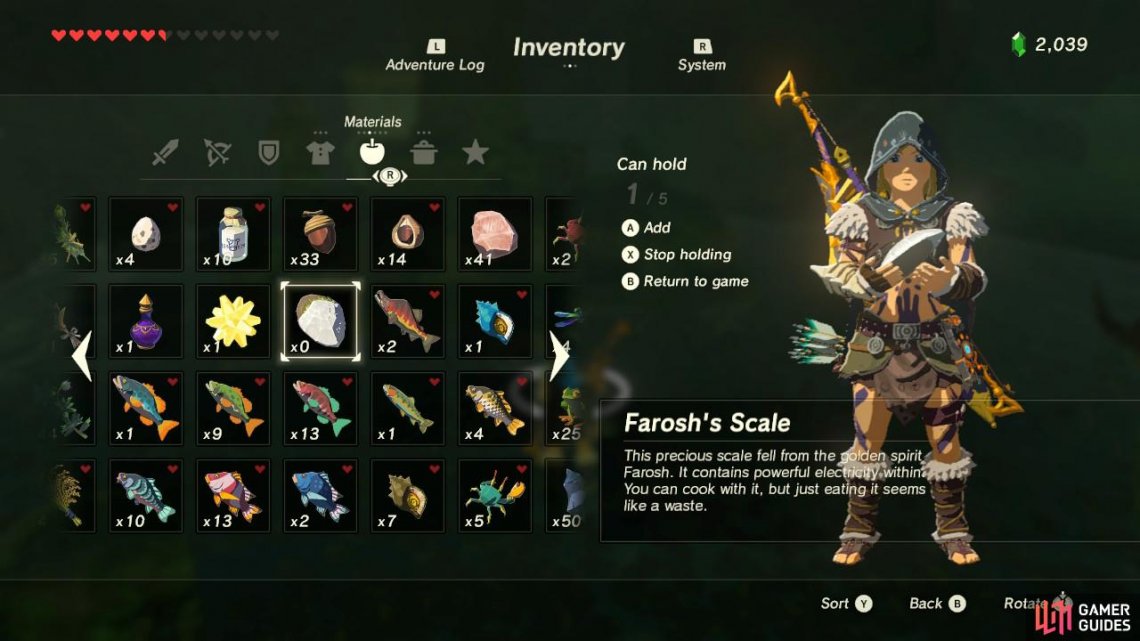 (1 of 2) Offer up a scale from the dragon Farosh 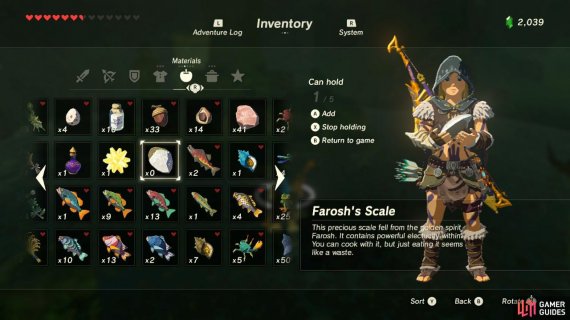 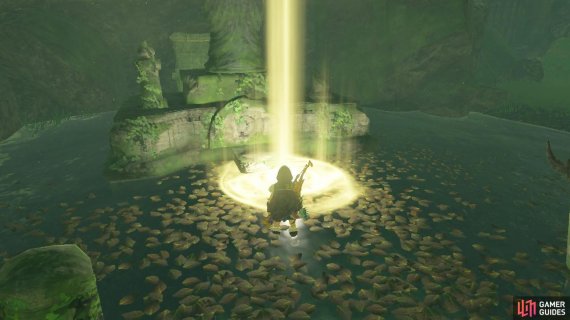 Offer up a scale from the dragon Farosh (left), Drop it in the water in front of the Goddess Statue (right)

Once you have prayed to the Goddess Statue, the Shrine Quest text in your Adventure Log will update to show the requirement of a Farosh’s Scale. To get a scale from the legendary dragon Farosh, you have to shoot with an arrow the body of Farosh, the green dragon.

Farosh will appear at the Bridge of Hylia around 12 midnight and also around the Floria Bridge near the Lakeside Stable around 10 PM. The easiest way to farm Farosh is to camp out on the Bridge of Hylia. Farosh creates orbs of electricity around itself to ward off the unworthy but like all dragons, is not explicitly aggressive. As Farosh passes by, you will see updrafts and the music will change. Farosh’s body is a pretty big target so shoot with your best bow.

Dragon parts always drop to a place where you can reach it and will emit a glow that is easy to spot from a distance. After you are done Paragliding and shooting, or you have expended all your stamina, land and look for where the scale has dropped. 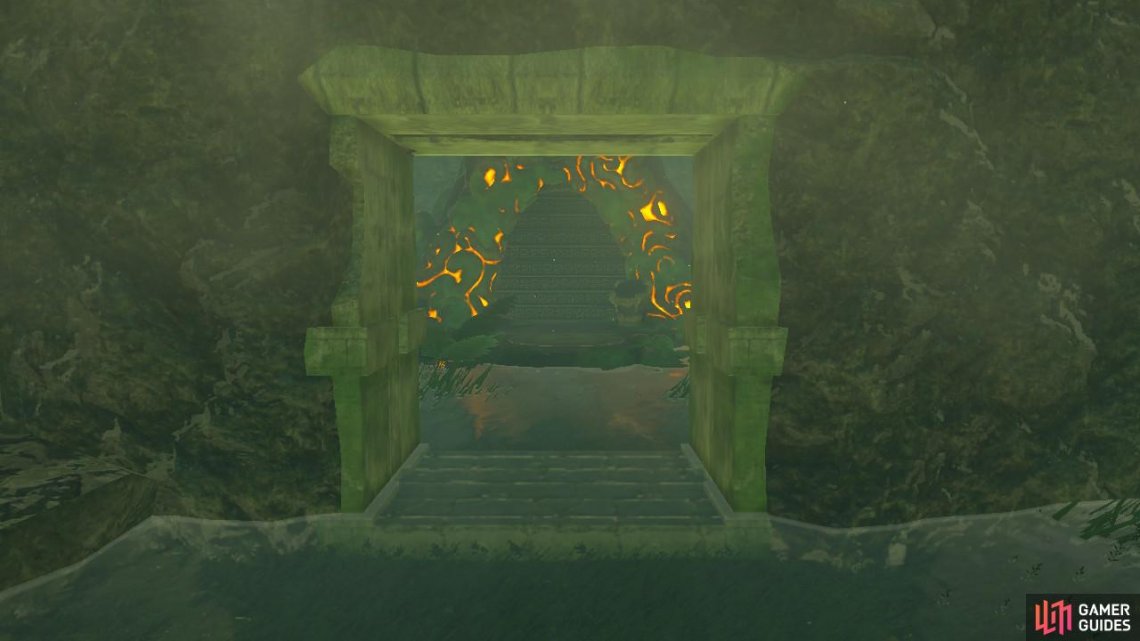 (1 of 2) The Shrine will open behind the spring 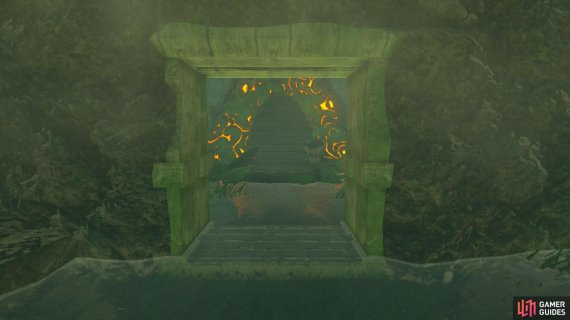 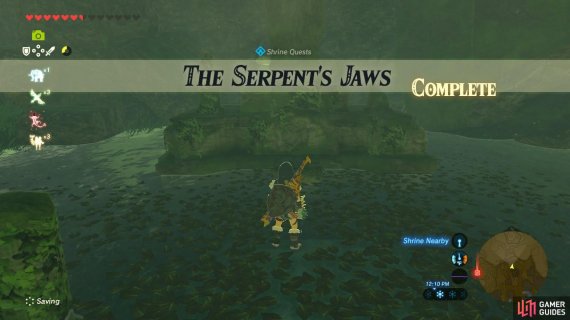 The Shrine will open behind the spring (left), This Shrine Quest is now complete (right)