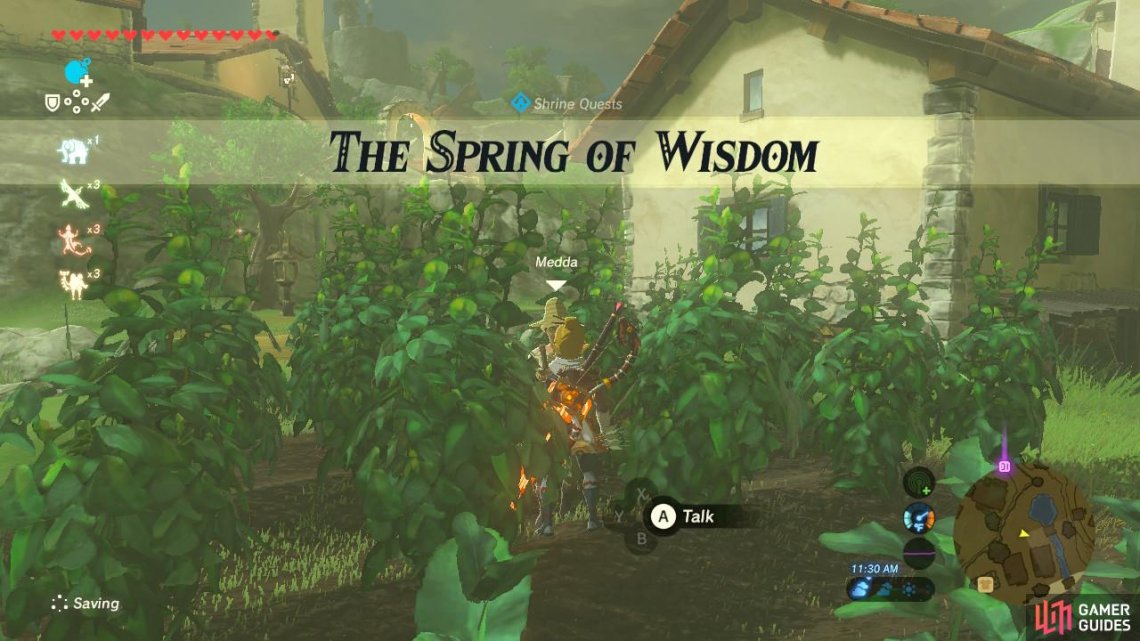 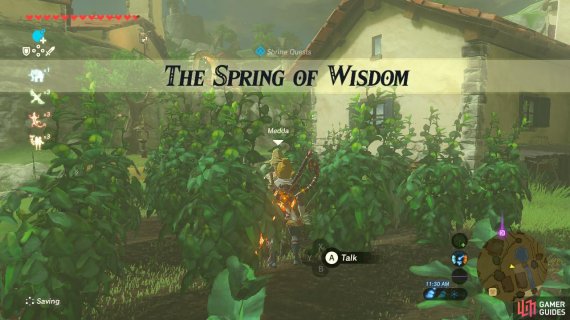 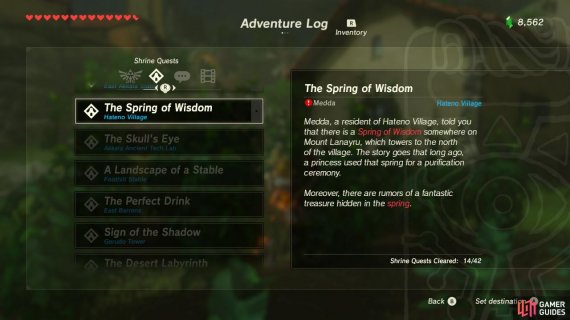 This Shrine Quest is a bit long and moderately difficult (left), It is one of three Shrine Quests surrounding the three sacred springs of Hyrule (right)

You will receive this sidequest by speaking with an NPC named Medda at Hateno Village. According to myths, there is an ancient spring there that Princess Zelda once visited, and there is a priceless treasure. Naturally, this can only mean one thing: a Shrine! 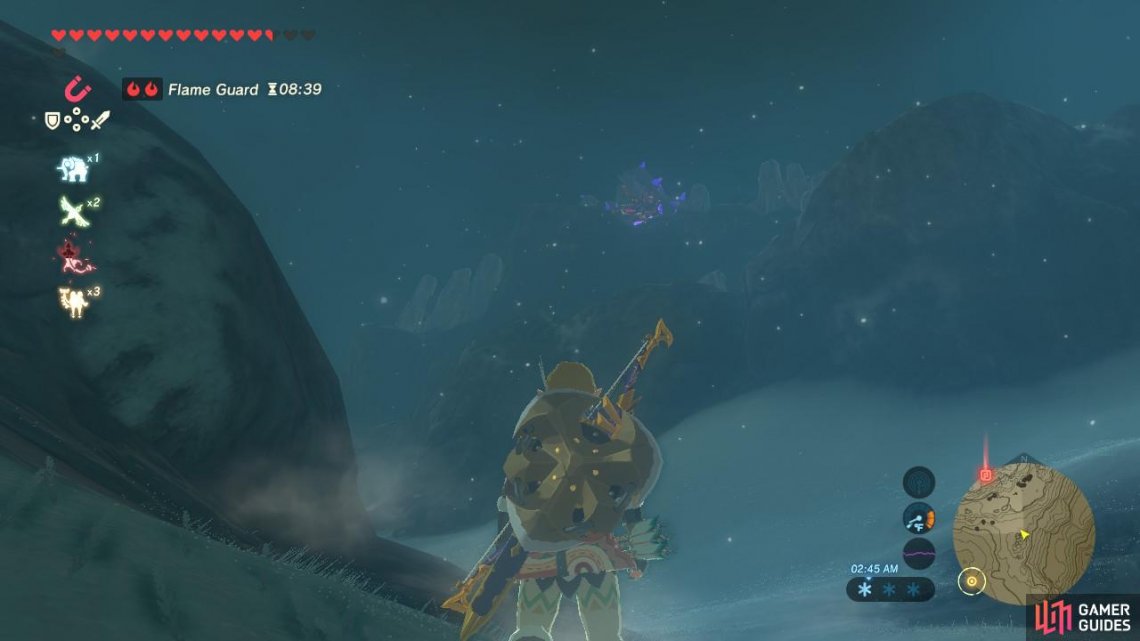 (1 of 2) Even from far away, you can see a strange purple glow 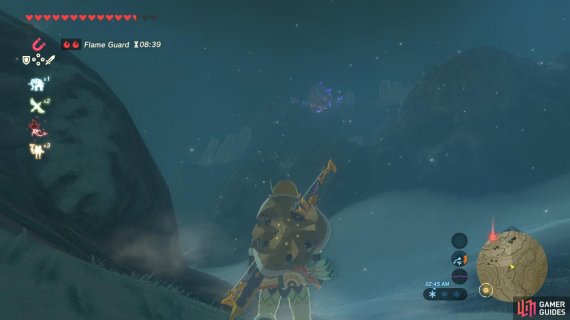 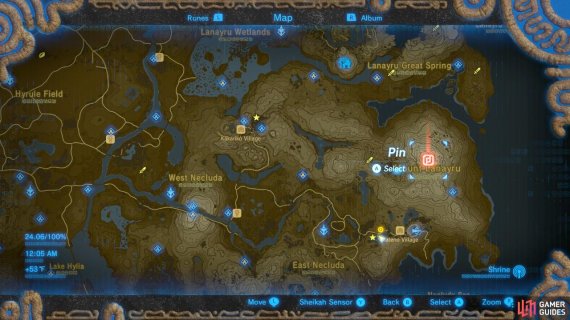 Even from far away, you can see a strange purple glow (left), Here is the location pinned on the map (right)

The location in question is on the summit of Mount Lanayru, where you can see an oddly-shaped body of water. Travel there. You will need to pack some gear to stave off the cold. You can see the location even from far away, due to the most ominous glow. As you get closer, you will hear extremely unsettling music. You can’t miss it. 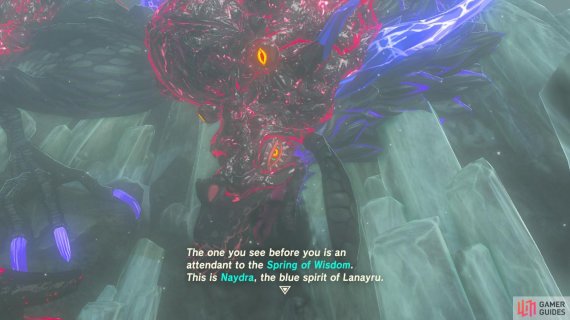 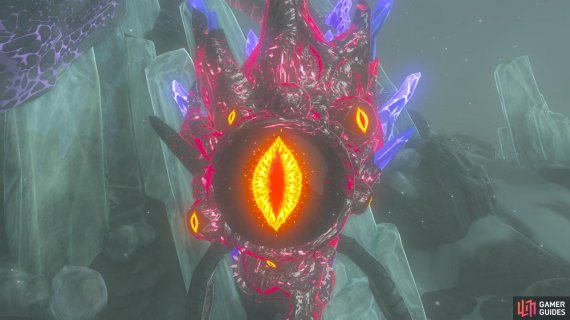 Listen to the Goddess Statue inform you of the situation (left), At this point, the eye on the forehead will open, and it will be vulnerable to your attacks (right)

Ouch. Looks like one of the three sacred dragons, Naydra, has been completely pinned by Calamity Ganon’s malice. To be able to begin the process of freeing it, you will have to step onto the platform in front of the Goddess Statue across the water. The Goddess Statue will then speak to you, asking you to free Naydra. At this point, the eye on Naydra’s forehead will open. 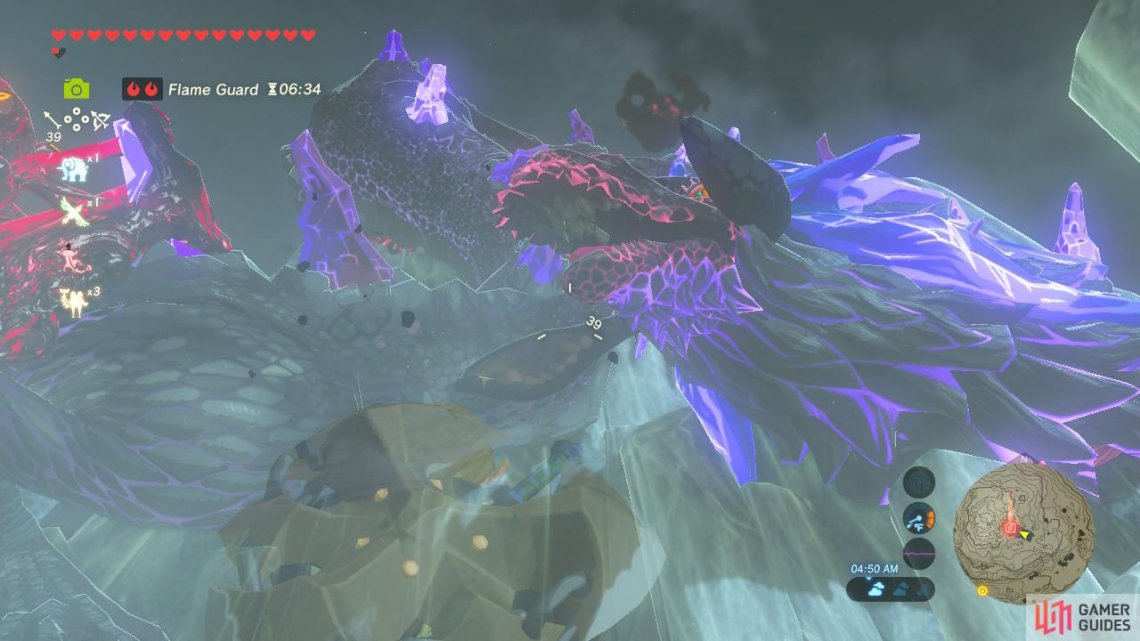 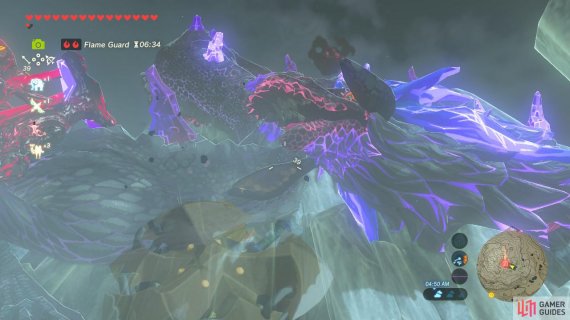 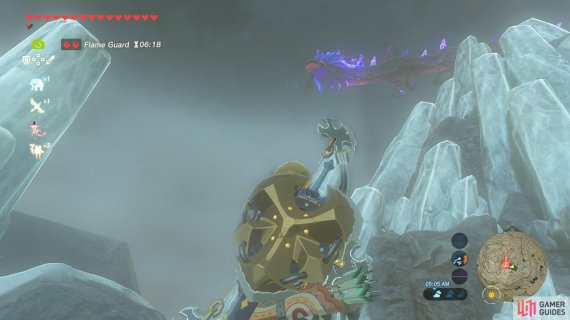 Naydra will leave its resting point after you have shot the eye on its forehead (left), It will fly above where it was resting in a circle until you shoot another eye (right) 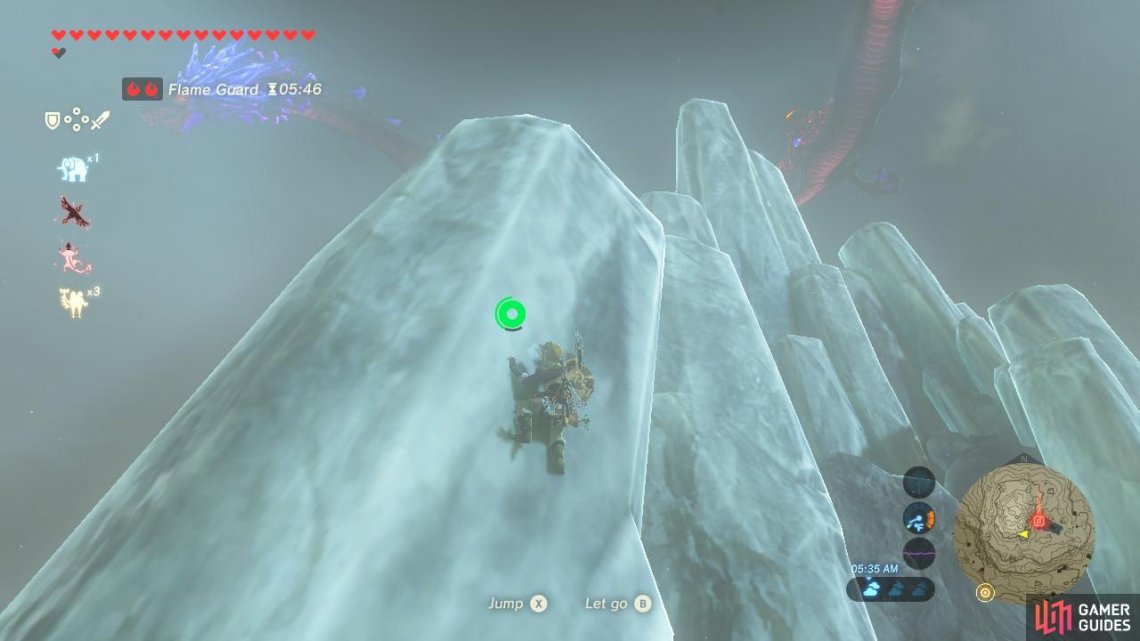 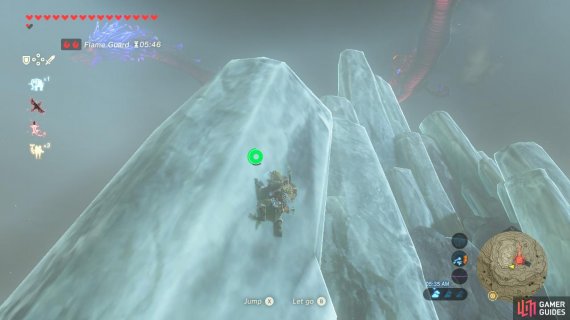 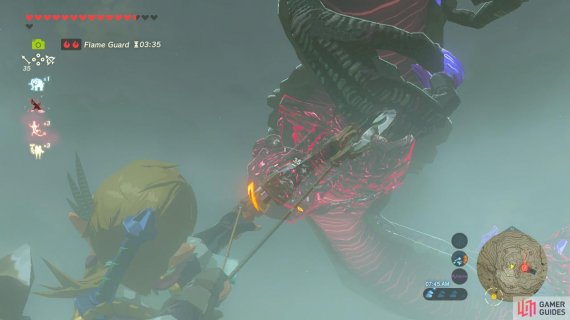 Climb up one of these ice spines for a better vantage point (left), The eye dropping from Naydra’s underside is the easiest to reach (right)

Climb up to the highest vantage point you possibly can, like the very tip of a particularly tall ice spine, and shoot at the eyes as they become visible. The easiest eye to shoot next is the one on its belly. Be careful not to come in contact with Naydra’s body, it will damage you and could send you falling off the spines. 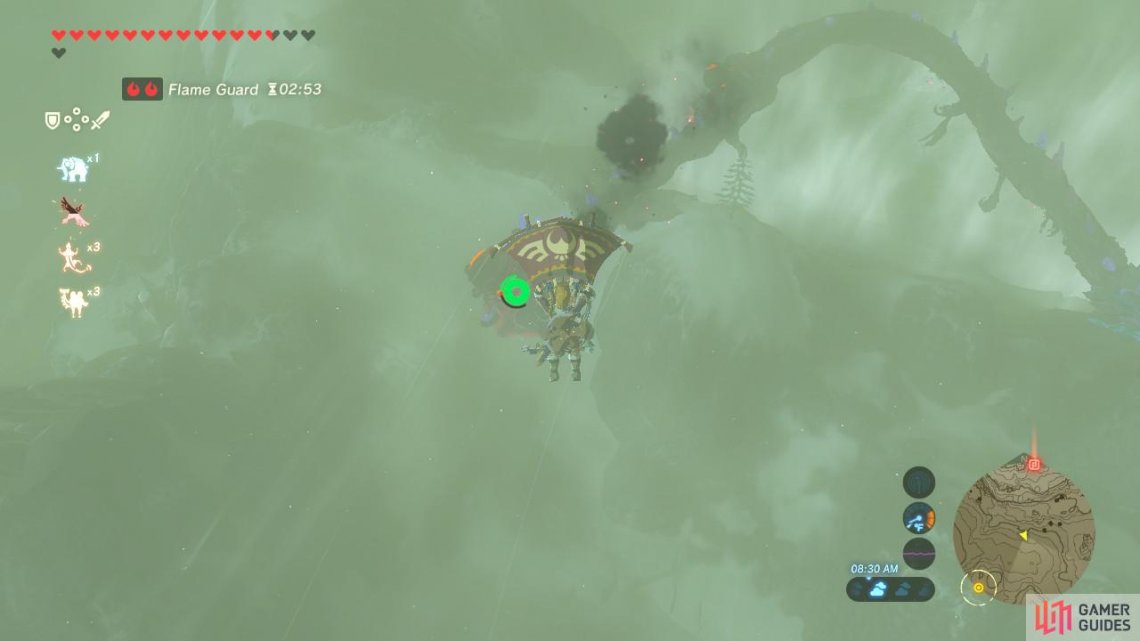 (1 of 2) If you run out of stamina, drop and then Paraglide again and your stamina will be restored 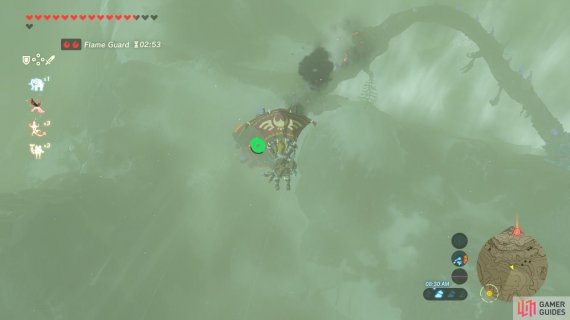 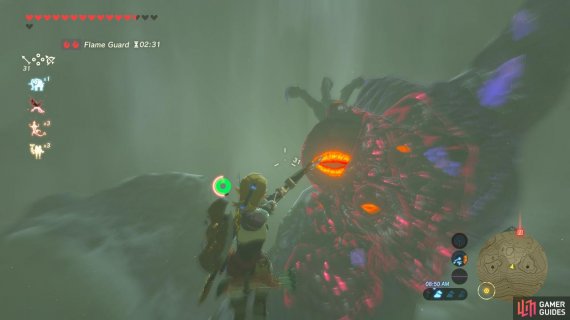 If you run out of stamina, drop and then Paraglide again and your stamina will be restored (left), Shoot whichever eye you can reach (right)

After this, Naydra will change flight pattern again and create a large updraft. Ride this for a better shot at shooting the malice on Naydra’s back or tail. The updraft will be localized to Naydra so if you don’t move quickly enough you will have to make chase on the ground before finding the updraft again. 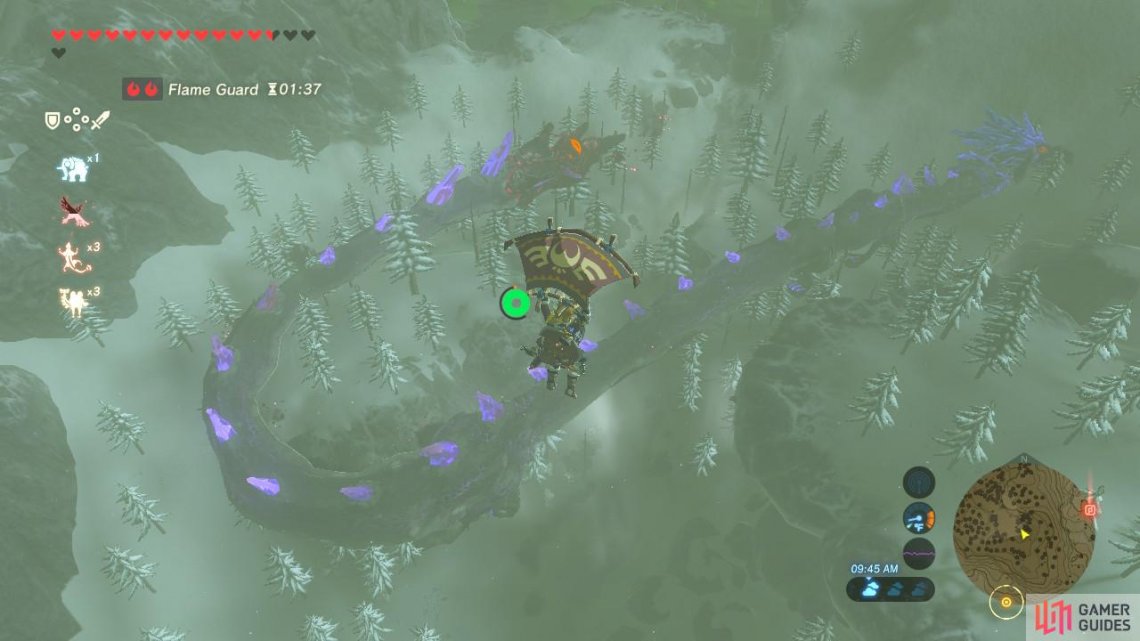 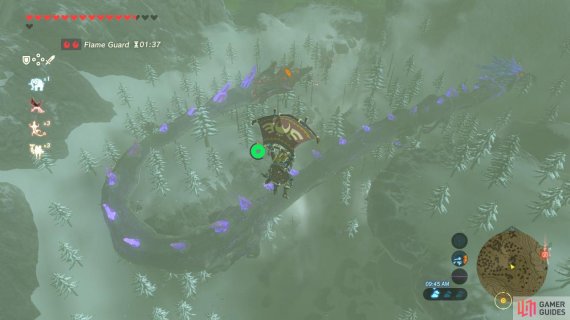 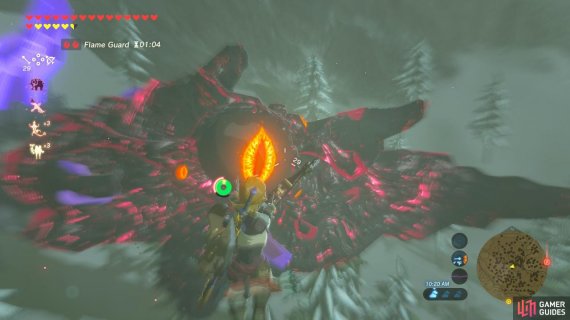 Keep Paragliding, following Naydra (left), In our case, the last eye to take care of was on the tip of Naydra’s tail (right)

Finally, Naydra will fly down towards a forest below the mountain. Follow it and its updrafts for the last eye. Don’t ride an updraft into Naydra’s body or else you’ll take damage and get knocked out of the air! 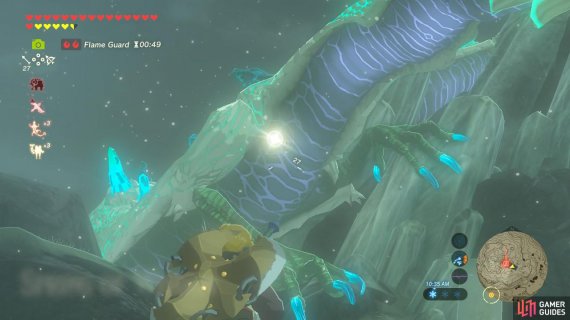 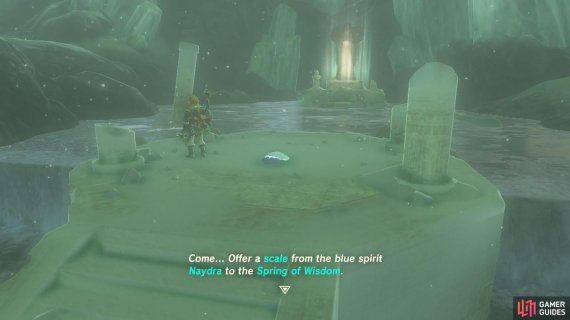 Shoot anywhere at Naydra’s body that your bow can reach (left), A scale will fall to the ground (right)

A cutscene will then play where Naydra returns to its usual colors and returns to its resting point where all of this began. The music will have also returned to normal. The Goddess Statue will speak to you once again and ask you to shoot Naydra’s body with an arrow. You won’t hurt Naydra, don’t worry. If you’d like, take a picture of Naydra for your Hyrule Compedium before you take aim. You won’t see Naydra in such a photogenic position again.

Once you have, another cutscene will play where Naydra flies to the skies. Now you will be able to normally encounter Naydra during its preset flight path and you can shoot various parts of its body for scales and other precious materials. Once the cutscene has concluded, the Goddess Statue will tell you to take the scale Naydra dropped and offer it to the spring. 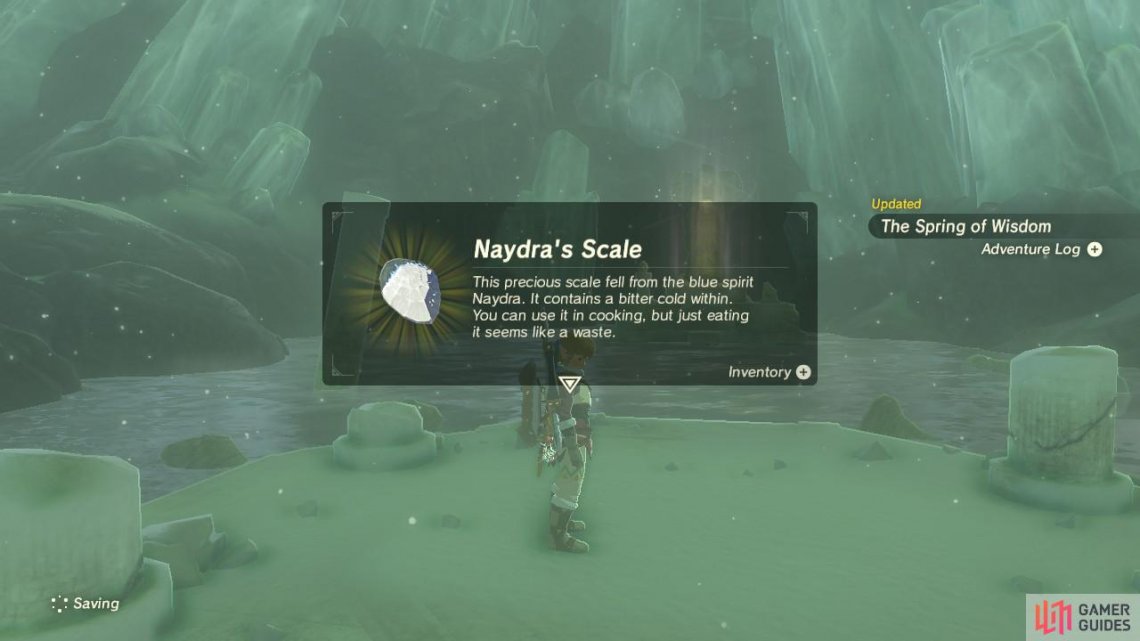 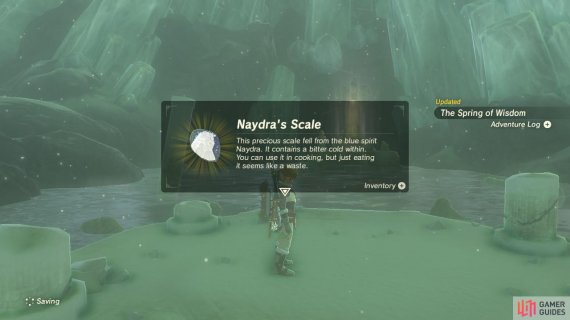 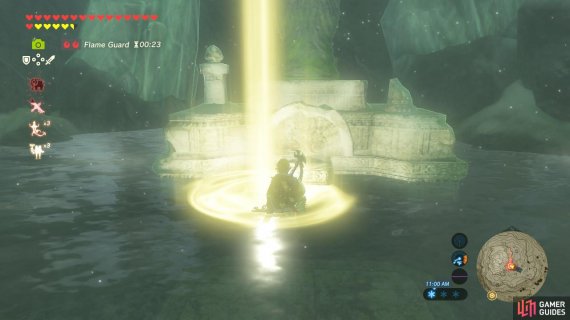 Grab the scale so you can offer it to the Goddess Statue (left), Drop it anywhere in the water near the statue (right)

Pick up the scale and then drop it in the waters in front of the Goddess Statue. The scale will glow brightly and a Shrine will open up behind the Spring of Wisdom. This is the treasure the Shrine Quest was talking about. Activate the Jitan Sa’mi Shrine and the quest is complete.