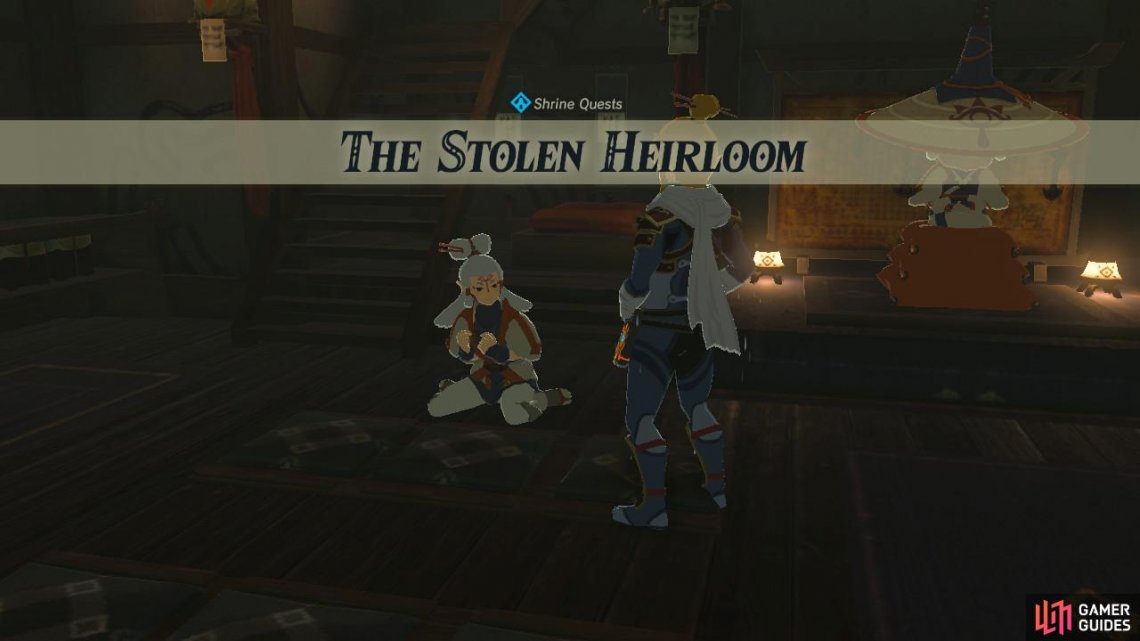 (1 of 2) This Shrine Quest has a variety of prerequisites 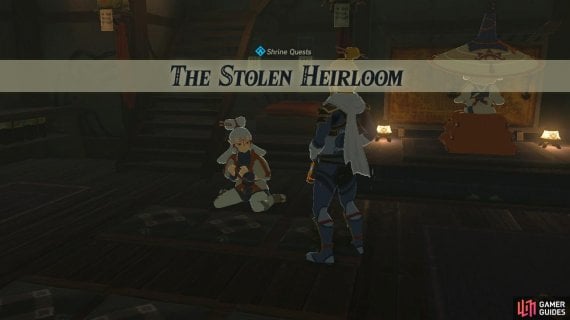 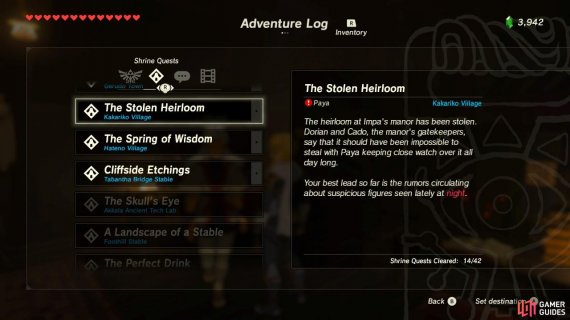 This Shrine Quest has a variety of prerequisites (left), The Shrine Quest itself is not too long but does have a boss fight (right)

You have to have completed a pretty full docket of sidequests before you can complete this Shrine Quest:

– By Firefly’s Light
– Find the Fairy Fountain
– Flown the Coop 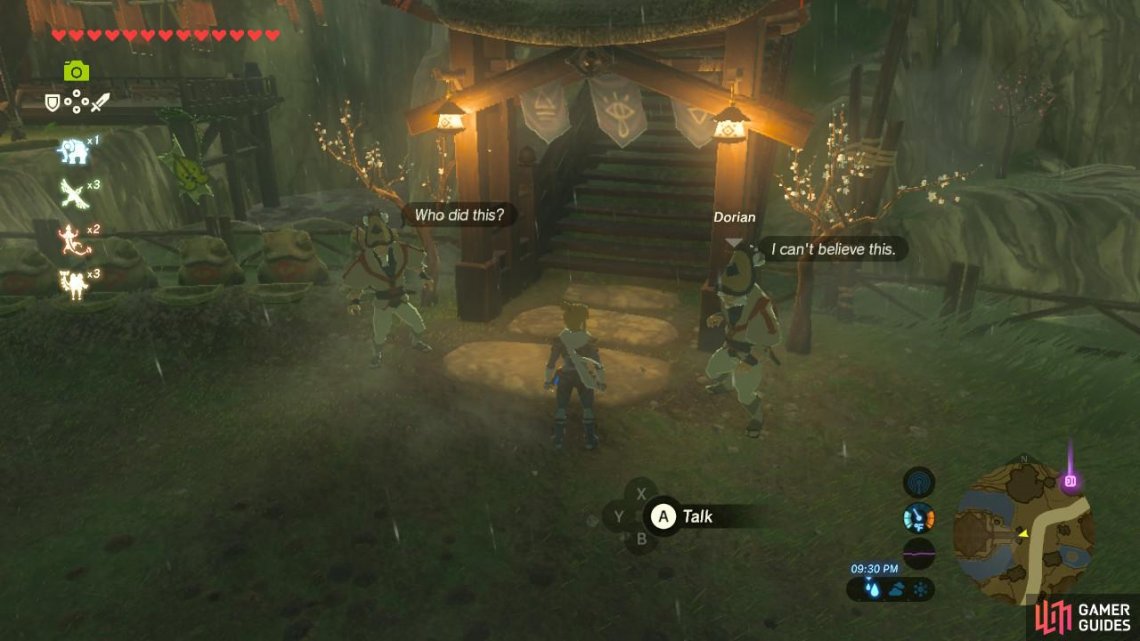 (1 of 2) Something is definitely wrong 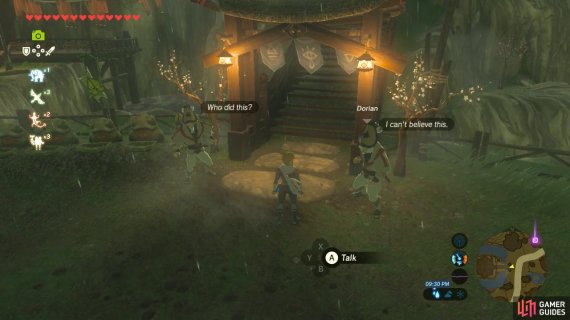 Something is definitely wrong (left), It looks like the ball by Impa’s side is gone (right)

Now, enter Impa’s house. As you pass the guards, you will notice their speech bubbles have changed to indicate that something has happened. Talk to Paya inside. You will trigger a cutscene where you learn the heirloom kept by Impa’s side has been stolen.

You will have to keep Paya company until the end of the day. The only lead you have so far is that suspicious figures have been seen at night. So let’s go advance time to the night by sitting near a fire. 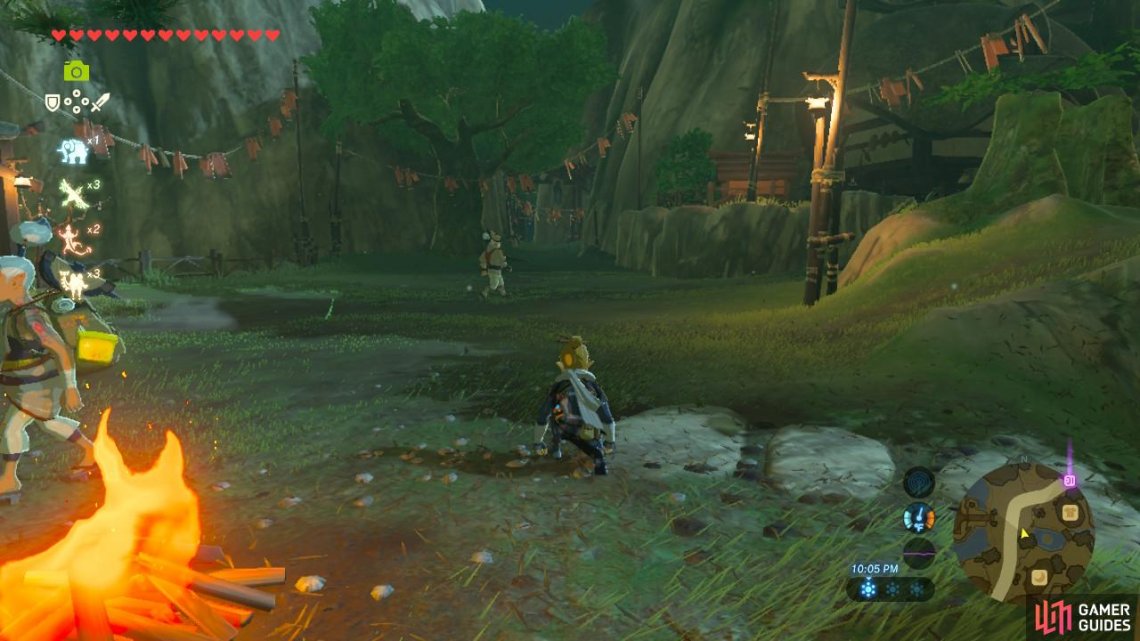 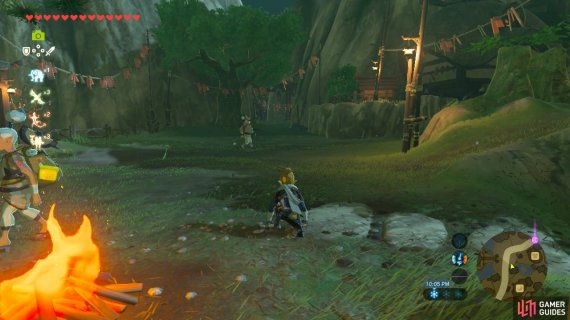 Give Dorian a bit of a head start (left), If he picks up on you, you will have to repeat this over again (right)

After it hits 10:00 PM, you will notice that Dorian, of all people, is beginning to act suspiciously. Don’t approach him immediately though. You will want to be as stealthy as possible, so if you have meals or elixirs that boost your stealth, now is the time to use them. Also, be sure to unequip all your gear for added silence. And if you have it, wearing the Stealth armor set can be helpful too. 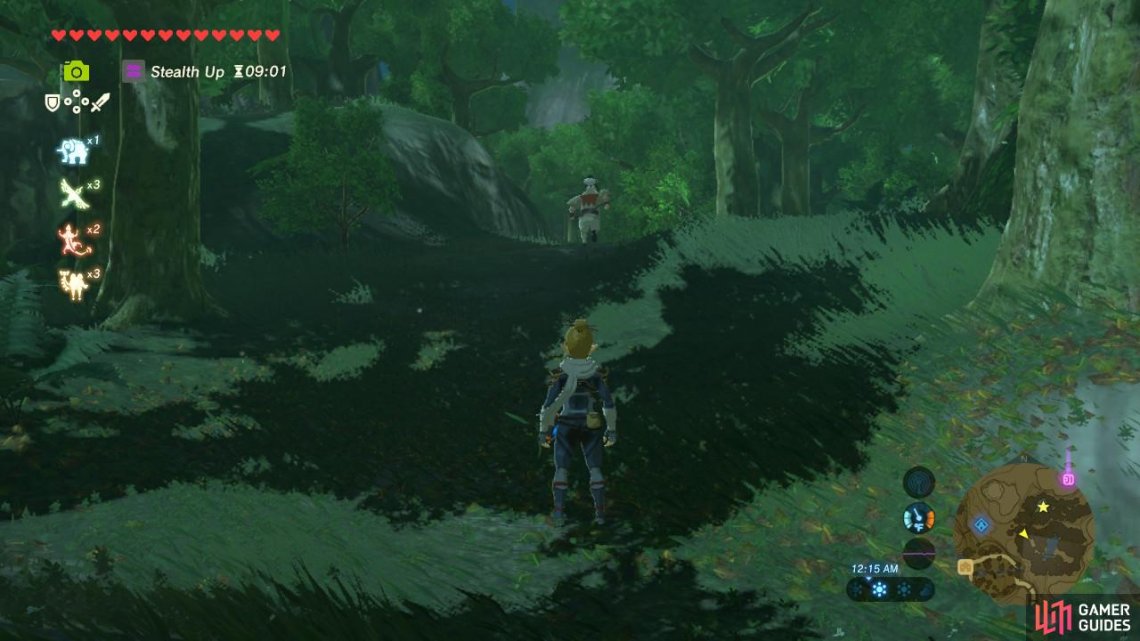 (1 of 2) Dorian will then go right, branching away from the Great Fairy Fountain 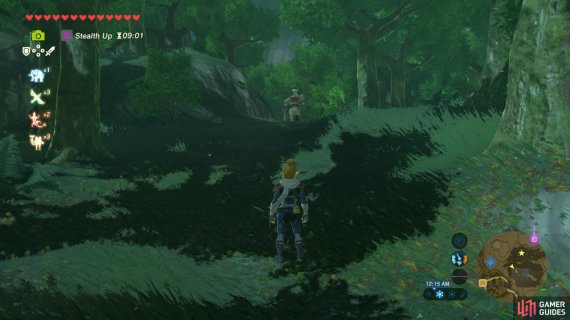 Dorian will then go right, branching away from the Great Fairy Fountain (left), Once he has crossed the bridge, follow him to trigger a cutscene (right)

Follow Dorian as he goes past Ta’loh Naeg Shrine and takes the right fork away from the Great Fairy Fountain. After a short distance, you will see a bridge leading up to an orange pedestal. Dorian will go up to the orange pedestal and demand that somebody show up. Cross the bridge to trigger a cutscene. 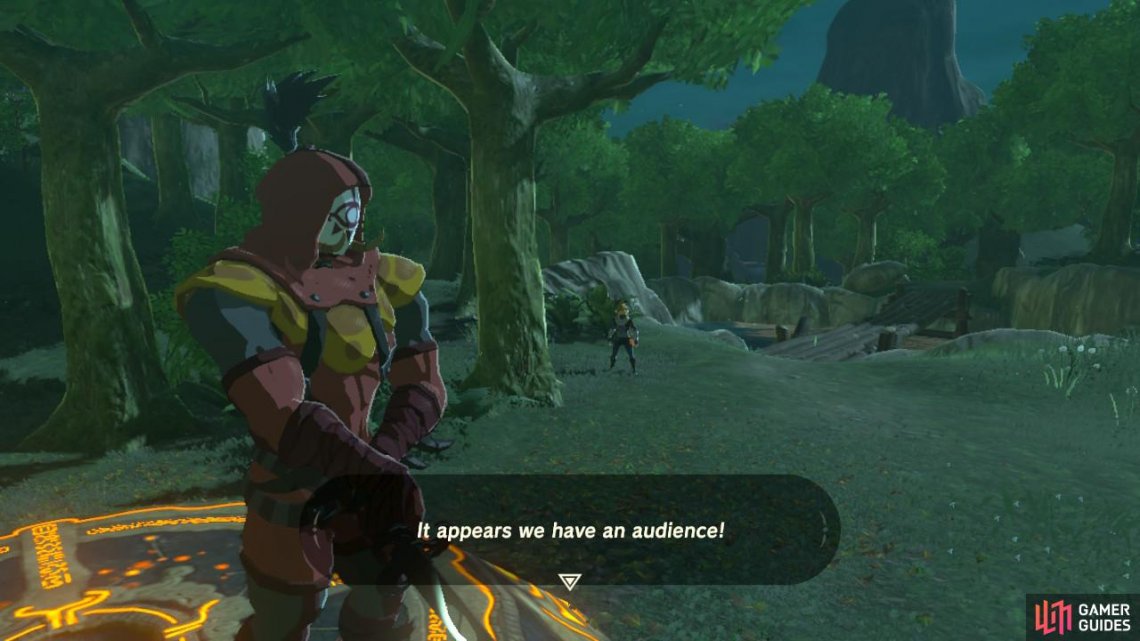 A Yiga Blademaster will drop in out of nowhere. It looks like this Yiga Blademaster stole our heirloom, and Dorian has been trying to get it back. Unfortunately, Dorian also is an ex-member of the Yiga Clan, which means nothing good could possibly come out of this.

Equip your best armor and gear and engage with this Yiga Blademaster so you can defeat him, save Dorian, and recover the heirloom. If you have 40+ defense, the Yiga Blademaster and his Windcleaver are actually very easy to deal with. But if you are doing this quest earlier on in the game, prepare for a long fight. 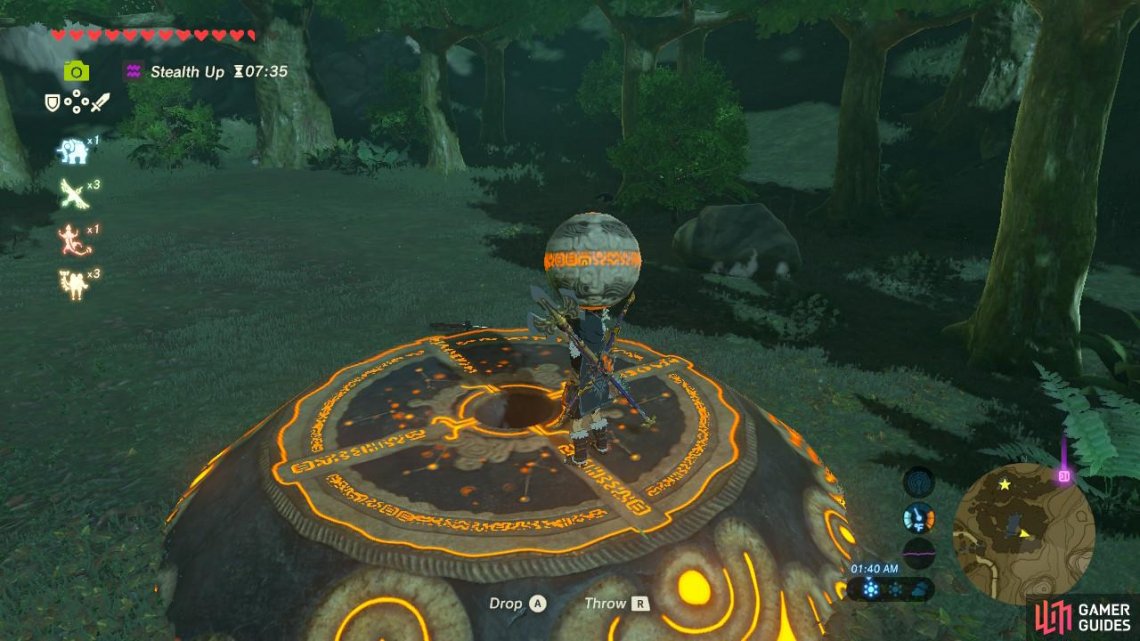 (1 of 2) Place this ball in the hollow shown here 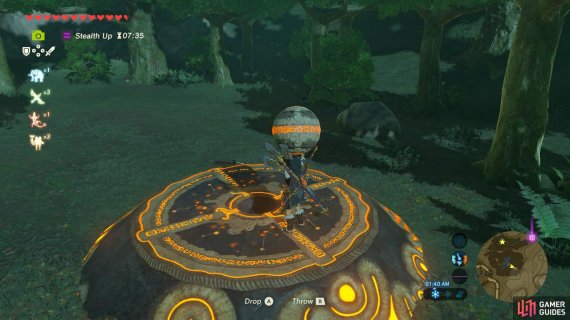 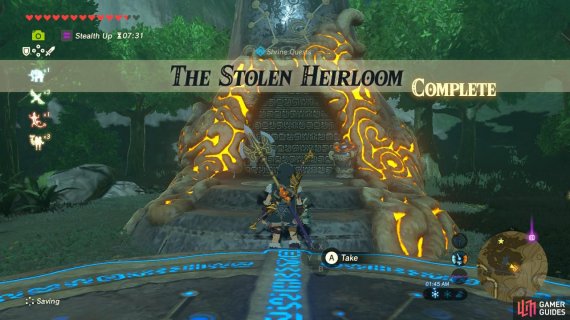 Place this ball in the hollow shown here (left), A Shrine will rise from the ground (right)

Once the Yiga Blademaster is defeated, Dorian will ask you to put the ball in the pedestal. Sure enough, it will open up Lakna Rokee Shrine and complete this Shrine Quest.