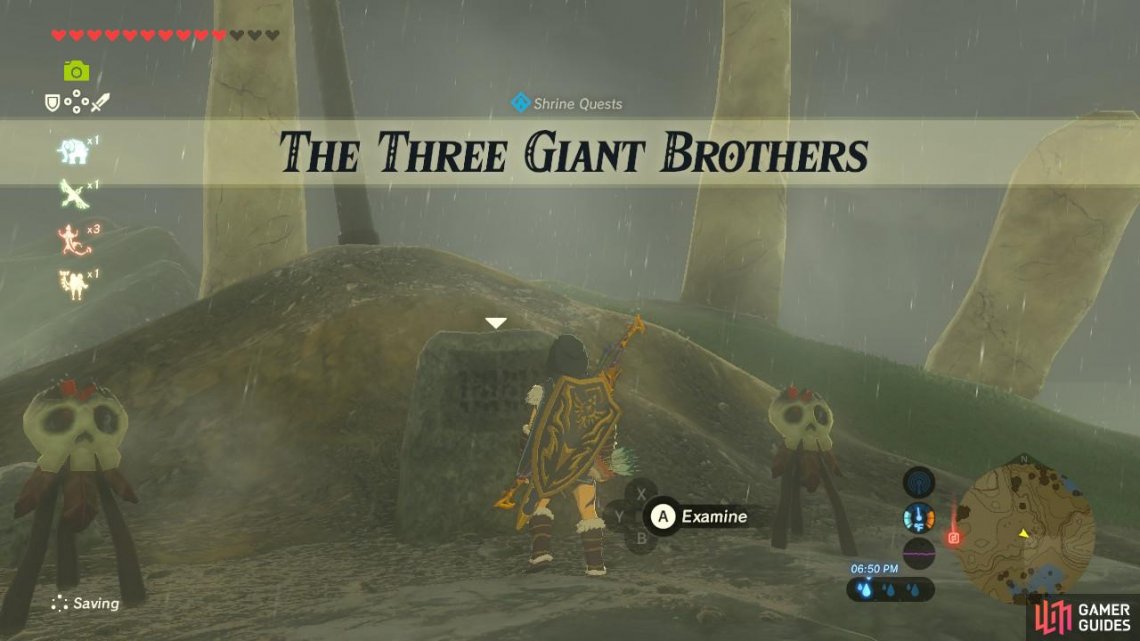 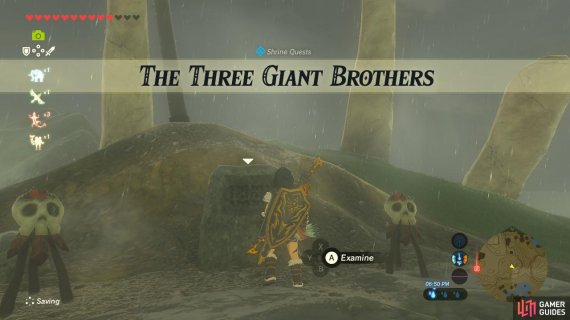 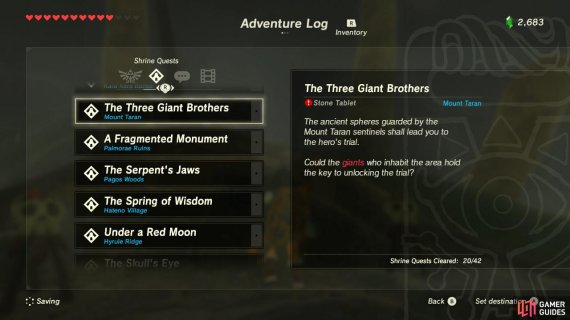 This Shrine Quest involves defeating three Hinoxes (left), There’s not too much traveling involved but gear up for some boss fights (right) 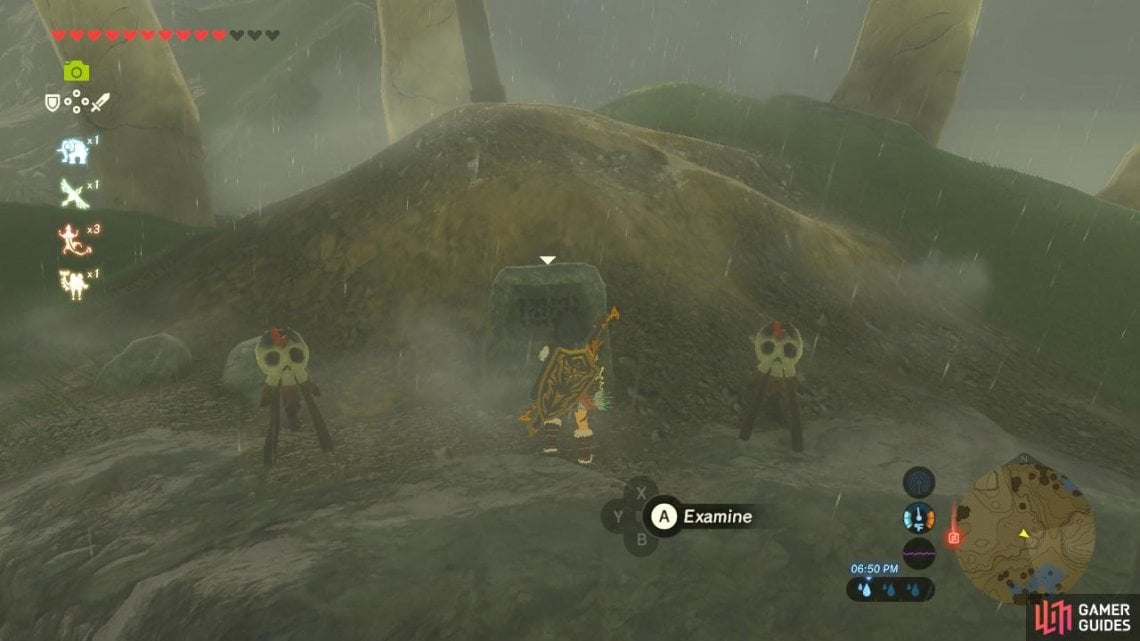 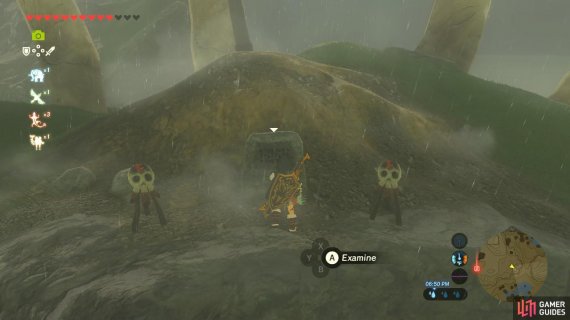 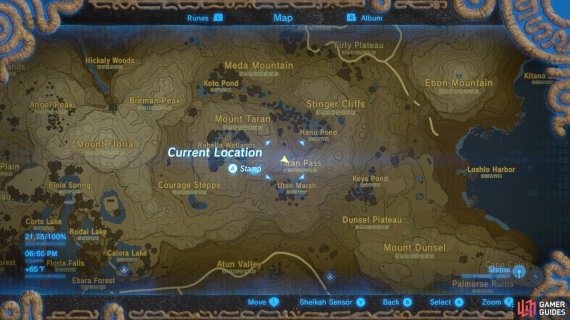 The rock slab that starts this Shrine Quest is here near skulls and three pedestals (left), Here is the location of the rock slab (right)

South of the Hateno Tower, on the cliff west of Taran Pass, you will see a triangular formation of three pedestals and a slab of rock with writing on it.

In order to unlock the Shrine, you must retrieve three orbs from somewhere (you know, this glowing orange balls). The secret to the riddle is that three nearby Hinoxes are guarding the orbs and you will have to defeat the Hinoxes in order to get them back. 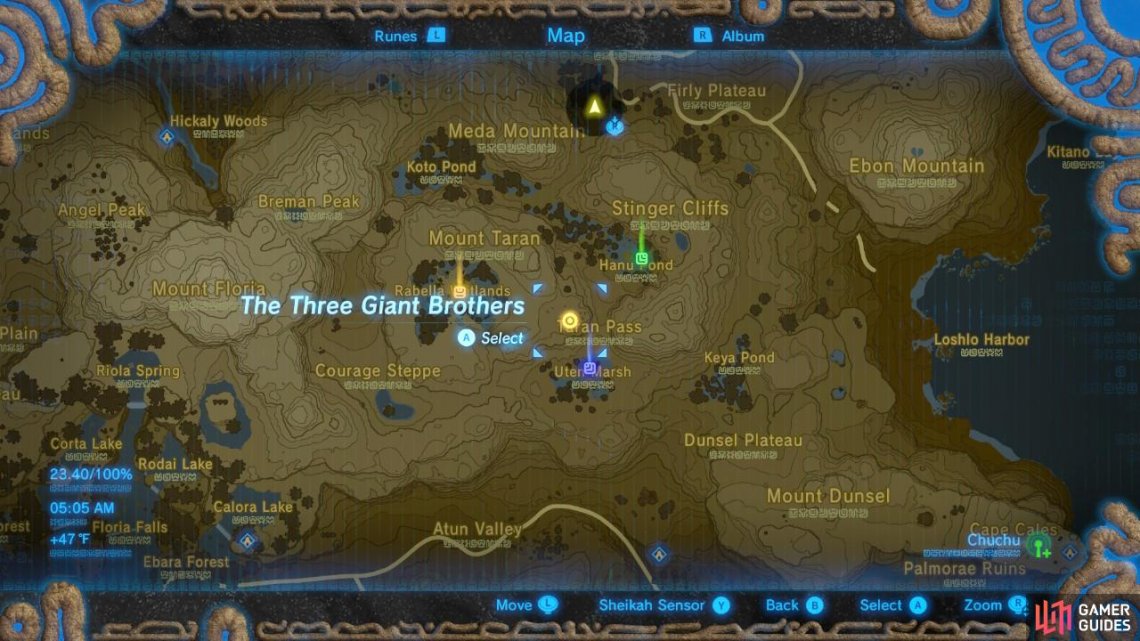 All three Hinoxes are sleeping in the middle of a body of water, and all three of them are in the vicinity of the pedestals in a triangle around the area. There will also be skeletal formations around them. One way to make the fight easier is to stand on top of one of the rib-shaped columns and shoot arrows from above. 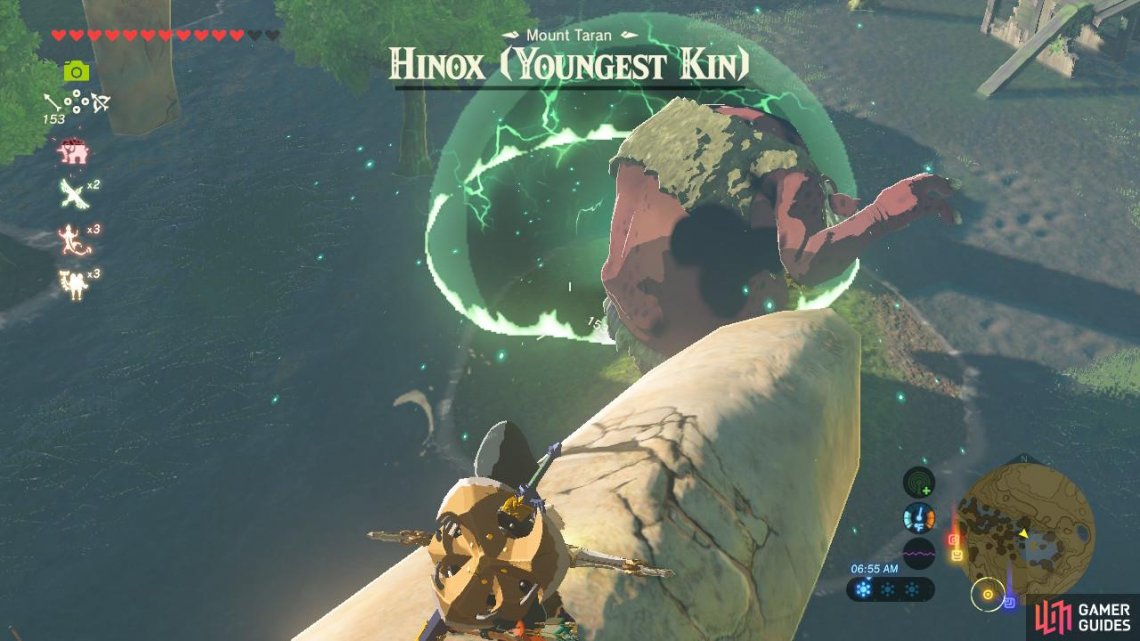 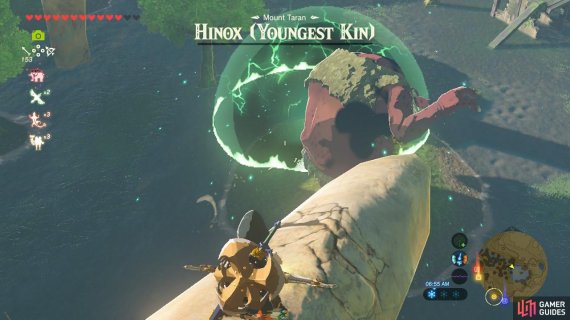 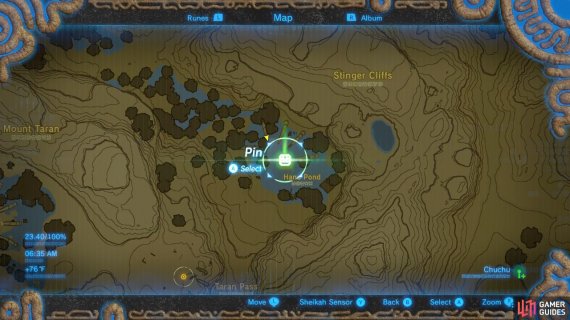 You can shoot from the bones above the pond easily (left), Here is the location of the Youngest Kin (right)

The Youngest Kin Hinox is in Hanu Pond to the northeast of the pedestals. It will drop the orb that is on its neck after you kill it. Carry the orb back any of the three pedestals and put it down. You will have to take a more roundabout path since you cannot climb while carrying an orb, but it should be a short, peaceful walk. 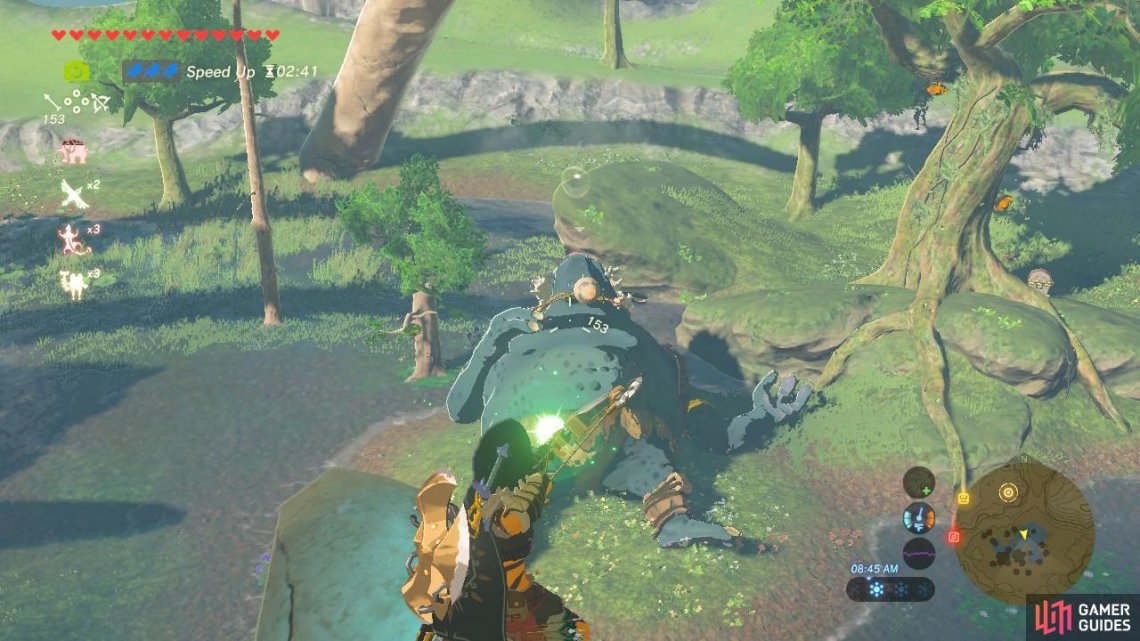 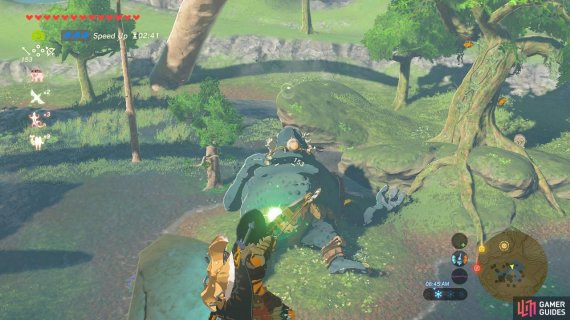 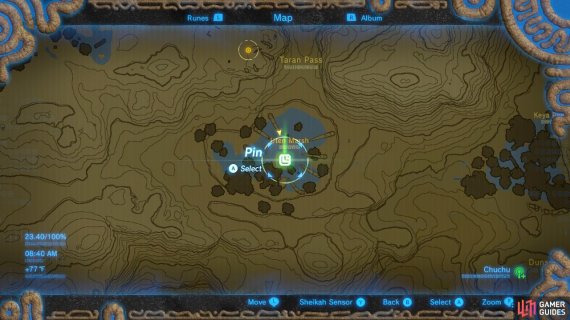 The Middle Kin Hinox is in Uten Marsh to the southeast of the pedestals. It is a Blue Hinox, so it’s a step above the Youngest Kin, which was just a regular Hinox. It will also drop the orb from its necklace after you have defeated it. Carry the orb back and again drop the orb into any of the two remaining pedestals. 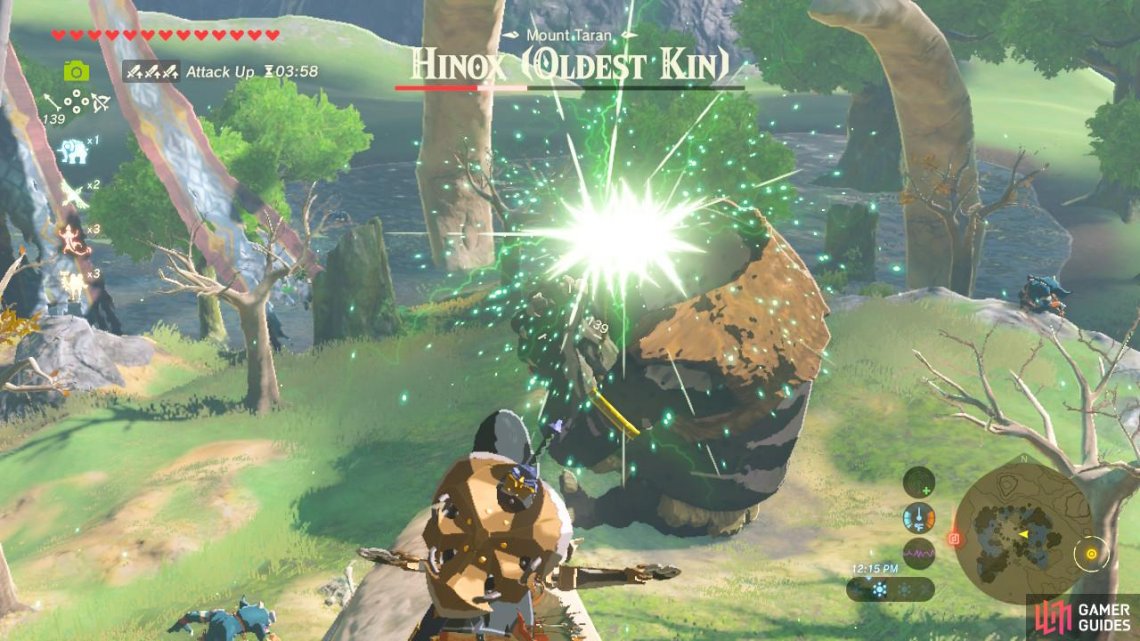 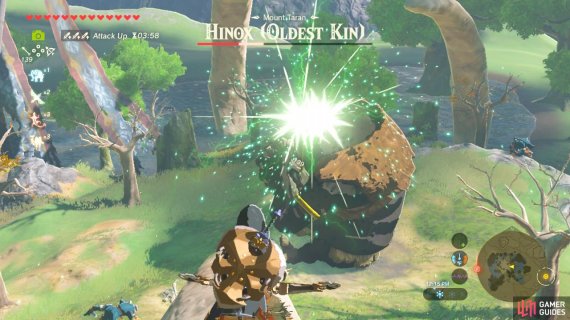 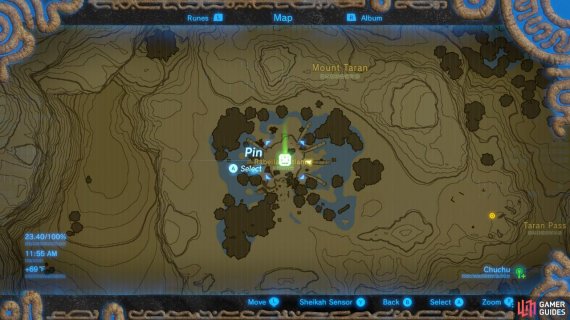 The Oldest Kin is a Black Hinox and has the most health (left), Here is the location of the Oldest Kin. (right)

The final, Oldest Kin Hinox is at Rabella Wetlands which is northwest of the pedestals. This Hinox is a Black Hinox, which is more powerful and durable than a Blue Hinox. The Rabella Wetlands are frought with other enemies besides just the Hinox, such as Bokoblins, so if you need to, defeat them first to clear out the area. You will probably want to deal with them eventually so you can move the orb out safely.

Don’t forget to pull out the chest from the ground with Magnesis for a shiny gold Rupee worth 300 Rupees. 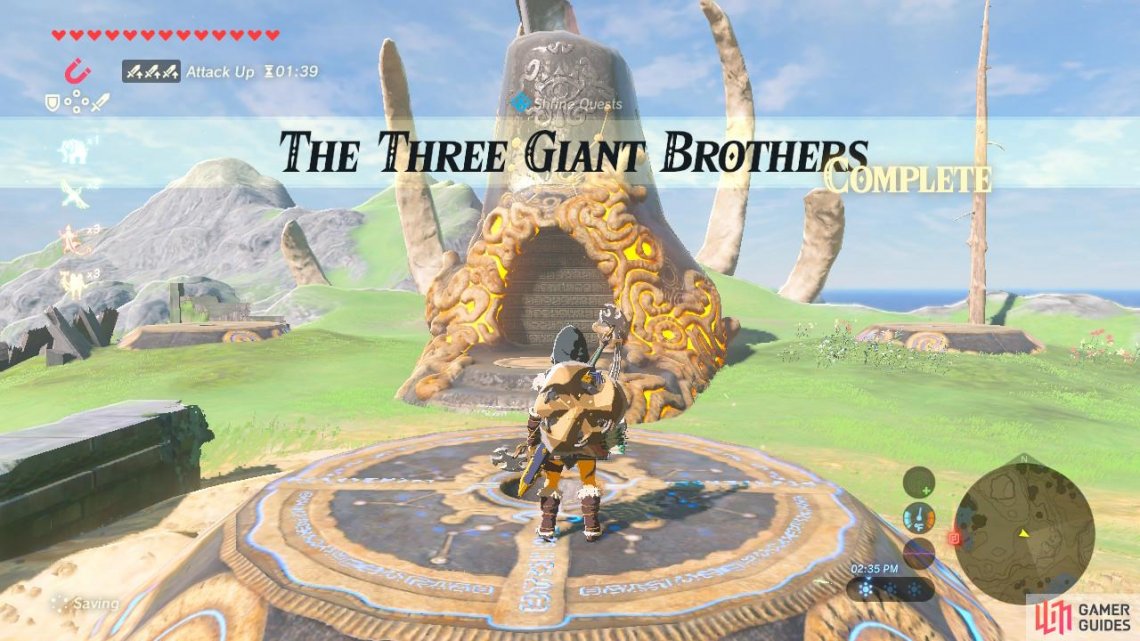 Once you have placed the final orb in its pedestal, the Tawa Jinn Shrine will rise up from the ground, completing this Shrine Quest.