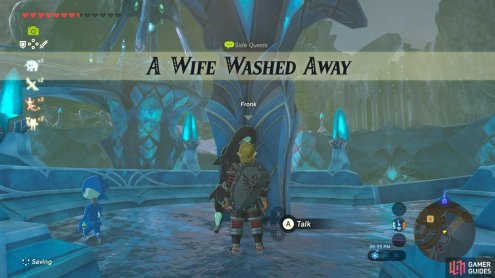 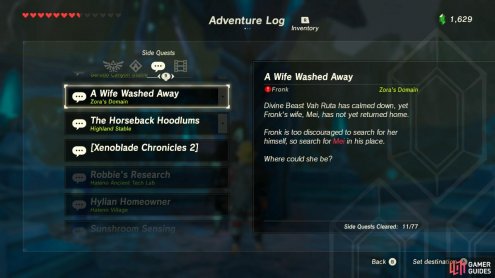 A Wife Washed Away

This sidequest becomes obtainable once you have calmed the Divine Beast Vah Ruta. Return to Zora's Domain and talk to a Zora named Fronk. He will tell you that his wife has been missing for some time and could have been swept away by Vah Ruta. Fronk will give a few hints as to her whereabouts, mostly that she was fishing in the Zora River but could potentially have been washed away as far as Lake Hylia. 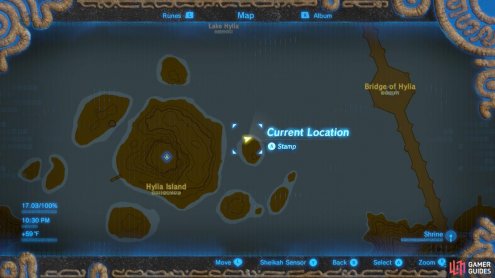 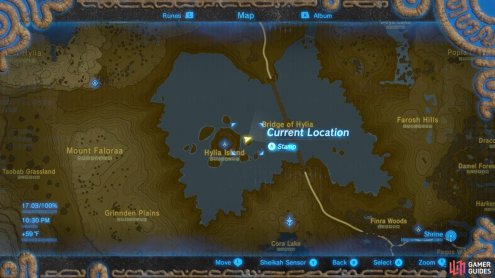 The long way to figure out where his wife went would be to follow the Zora River down to where it drains into Lake Hylia. But since this handy guide is here to save you some time, you can bypass this step and go straight to Lake Hylia directly.

If you have discovered the Ya Naga Shrine, you can fast travel there. Fronk's wife is just east of there. Otherwise, go to the Bridge of Hylia, the large bridge that crosses the expanse of Lake Hylia, and then paraglide west to where you see a lone Zora. 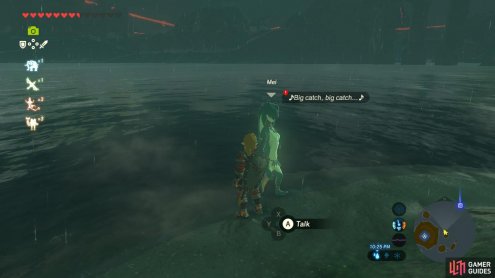 The Zora, Mei, is Fronk's wife. Upon talking to her, she will pick up and leave. Apparently she got caught up in fishing and forgot to go home. Happens to the best of us. For your troubles, Mei will give you five Staminoka Basses. At this point, the sidequest is complete. You do not have to return back to Zora's Domain to talk to Fronk (unless you want to, of course).