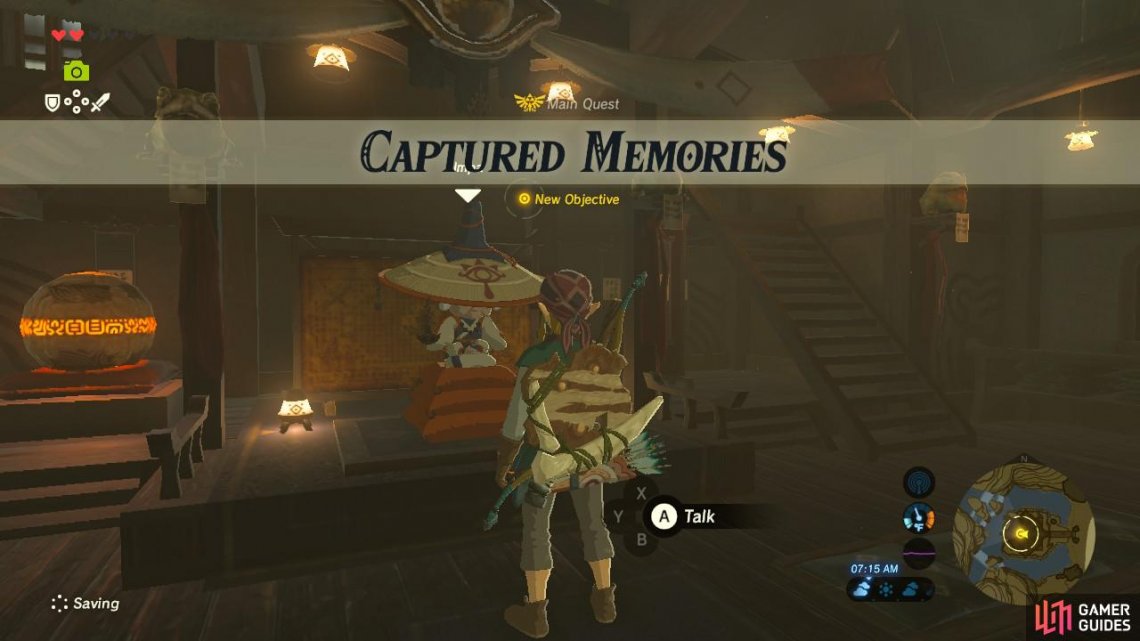 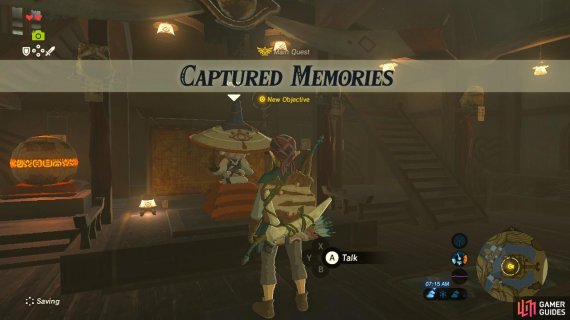 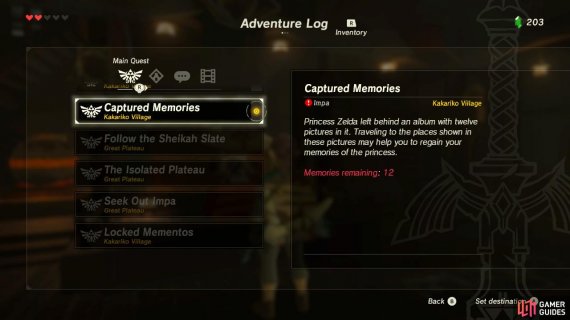 You will receive this quest the first time you talk to Impa in Kakariko Village (left), It is grouped with the main quests but it is optional (right)

This is grouped in with the main quests on your Adventure Log, but it is optional. You will get a secret ending if you defeat Calamity Ganon with this quest complete.

If you look on your Sheikah Slate you will see twelve images that you cannot delete. These were apparently taken by Princess Zelda at important moments in your journey with her as her appointed knight. The idea is if you revisit these places, you might remember snippets of your past and learn more about yourself and Zelda. Once you have seen all of the memories, inform Impa at Kakariko Village.

The photos themselves can sometimes be vague to the point of frustration. But don’t worry, we have you covered. Consult this page for where to go to get all of your memories back. When you reach a spot where you will recall a memory, you will see it glowing in yellow. If you get close enough, a prompt will ask you to press [A] to recall. After you enjoy the custcene, you can rewatch them anytime from your Sheikah Slate.

Note: There is a traveling NPC by the name of Pikango. You will likely meet him in Kakariko Village first, where he will talk about a Great Fairy Fountain. Complete his sidequest, Find the Fairy Fountain, and he will reward you by giving you hints on your memory photos. 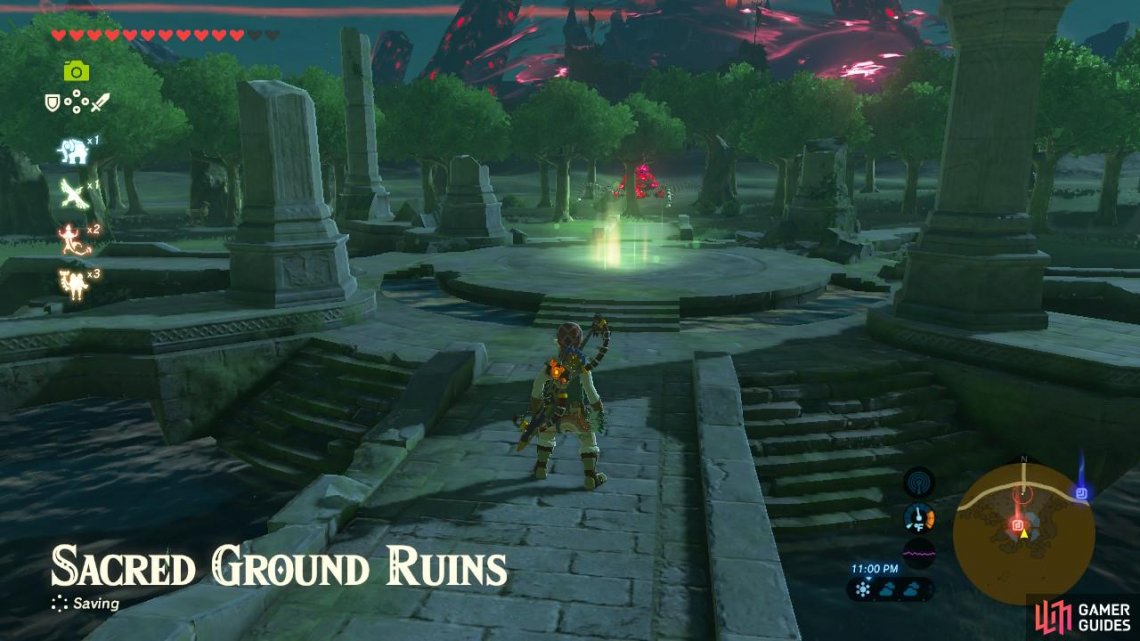 This memory is located in the Central region, specifically at the Sacred Ground Ruins. This area is directly south of Hyrule Castle and is in the center of the region, northeast of Central Tower. The area around it is swarming with Guardians, so be careful on the way there. Walk up to the central circular platform in the ruins and you will see the recall prompt appear. 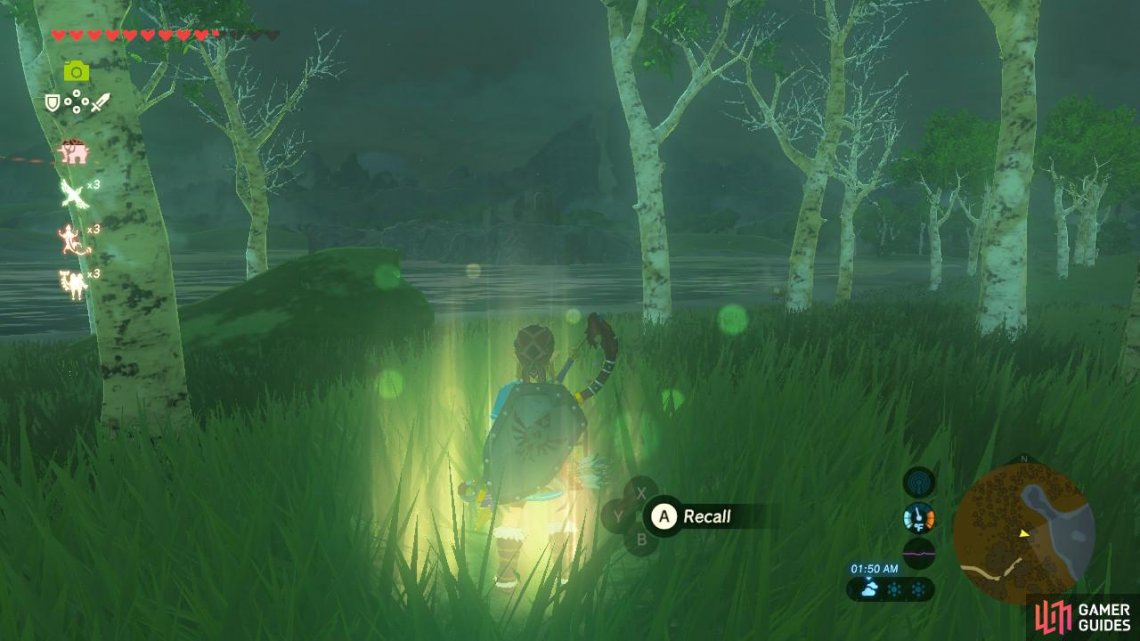 (1 of 3) The recall point is here near the lake

This memory is located around the western shore of Lake Kolomo. It is east of the Coliseum Ruins. The quickest way to get there is to Paraglide from either the Oman Au Shrine or the Great Plateau Tower in the Great Plateau region. Once you have reached the lake, which is distinguishable by its odd shape, go to the western shore in the location indicated on the screenshots. You will see a small little hill and the recall point is next to it. This memory is located at the Ancient Columns. The Ancient Columns are located south of Tabantha Tower. You can fast travel to Tena Ko’sah Shrine if you have unlocked that Shrine. It has to be daytime for the glowing spot to appear. 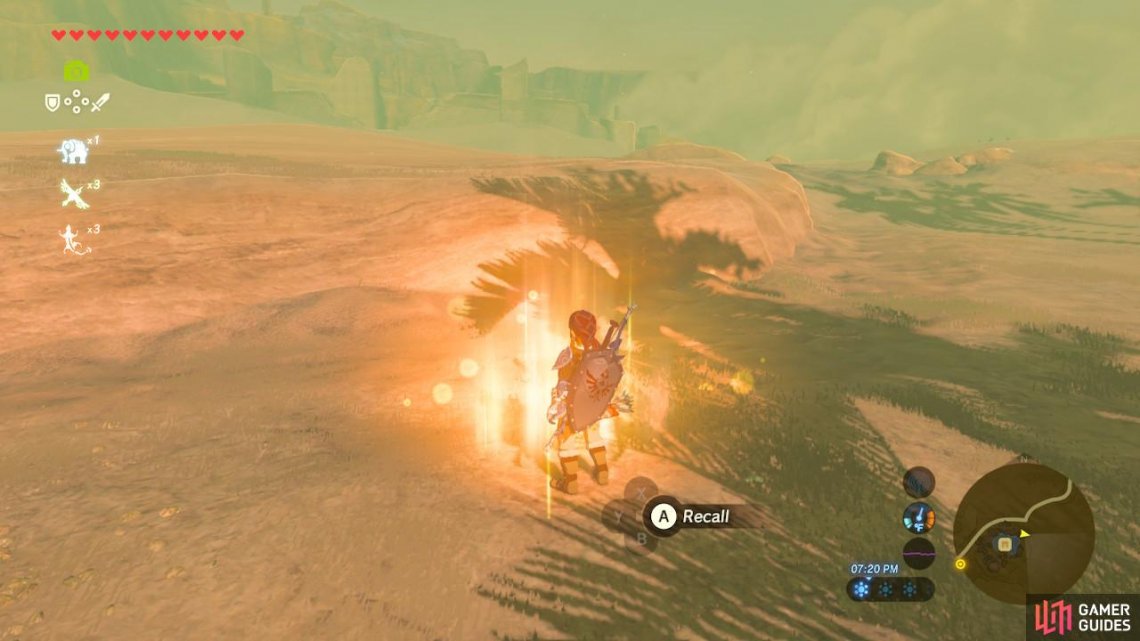 This is probably one of the easiest memories to obtain, and may very well be your first memory if you were not deliberately going out of your way to find the other ones. This memory is located right at the entrance of Kara Kara Bazaar, a mandatory travel point if you are completing the main quest. Kara Kara Bazaar is in the Wastelands region and marks the midpoint between the entrance to the desert and Gerudo Town. 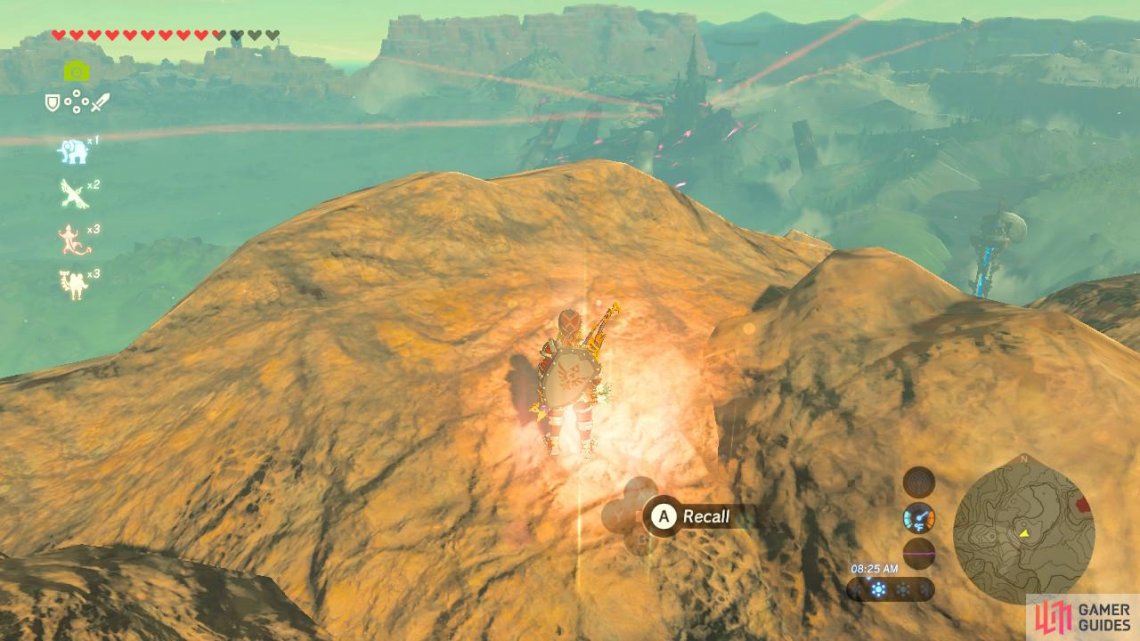 The closest fast travel point to this memory is Eldin Tower. The memory itself is on the west side of the small, fiery Goronbi Lake. The memory recall point is located specifically on top of a rock column high above the lake. There are a few Lizalfos that wander around the top of the column. 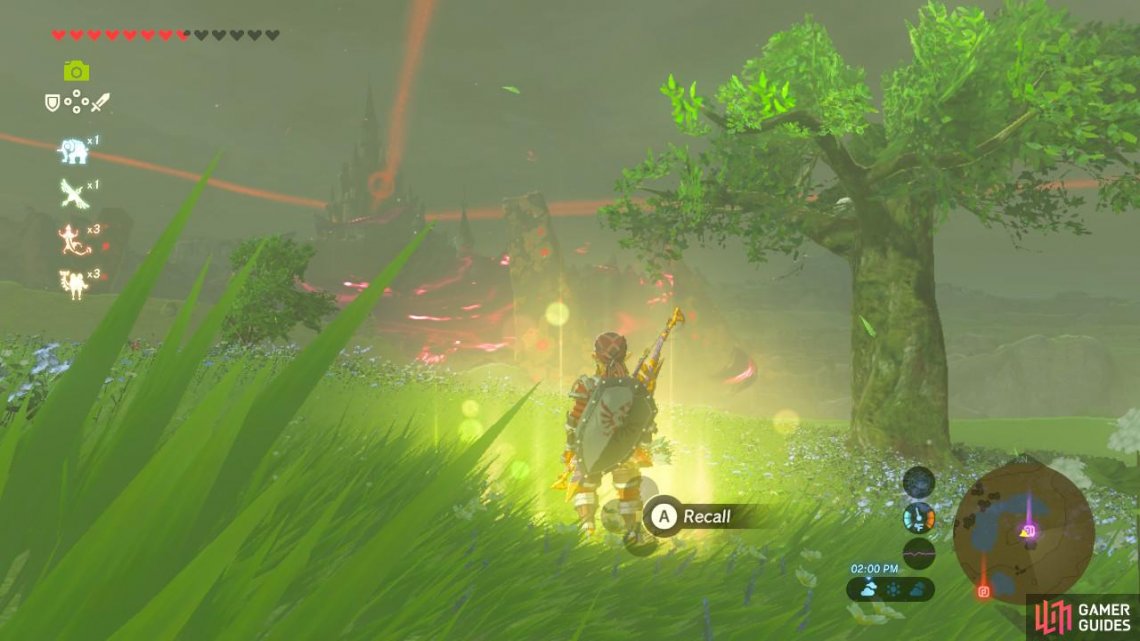 (1 of 3) This memory is located near the Ridgeland Tower

This memory is located nearby the Ridgeland Tower. Fast travel to the northeast, aiming for a small lake that is shaped like a corner. It is located on Irch Plain. Run around the shore until you reach the part where the shore cuts into the lake the most (a.k.a “forms the corner”) and you will see the glowing recall point by a small hill. 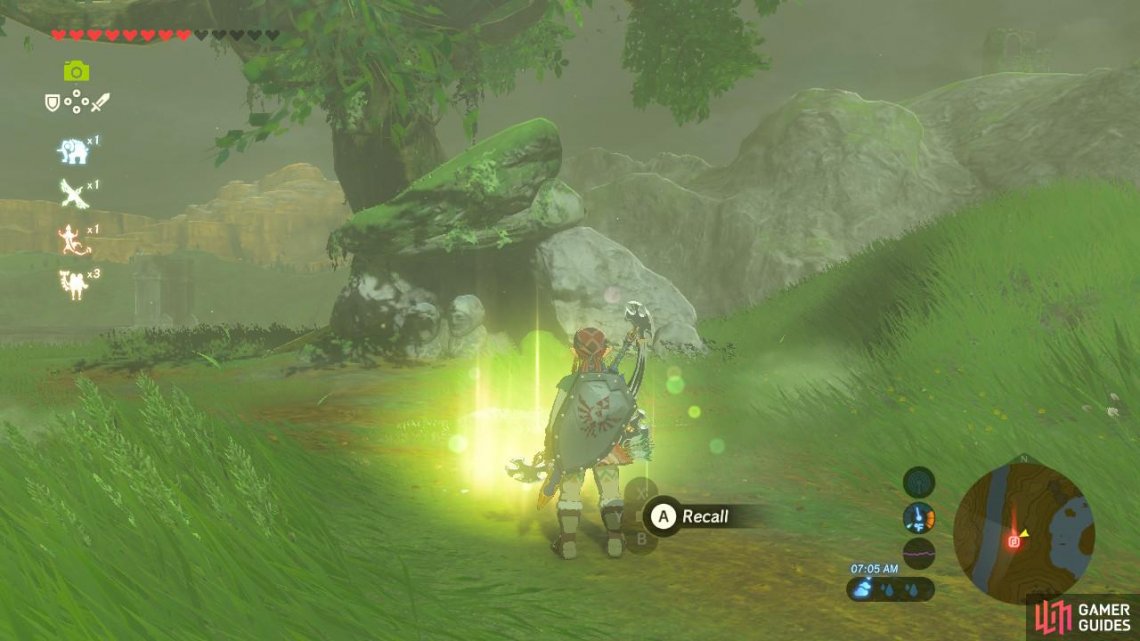 To recall this memory, travel to the Dueling Peaks region from the Great Plateau Tower. This memory is located in the West Necluda region right along the eastern shores of Hylia River. More specifically, it is across the river from the small Scout’s Hill. Another useful landmark for pinpointing it down is a small lake with a small island in the middle. The recall point is sandwiched between Hylia River and that lake. 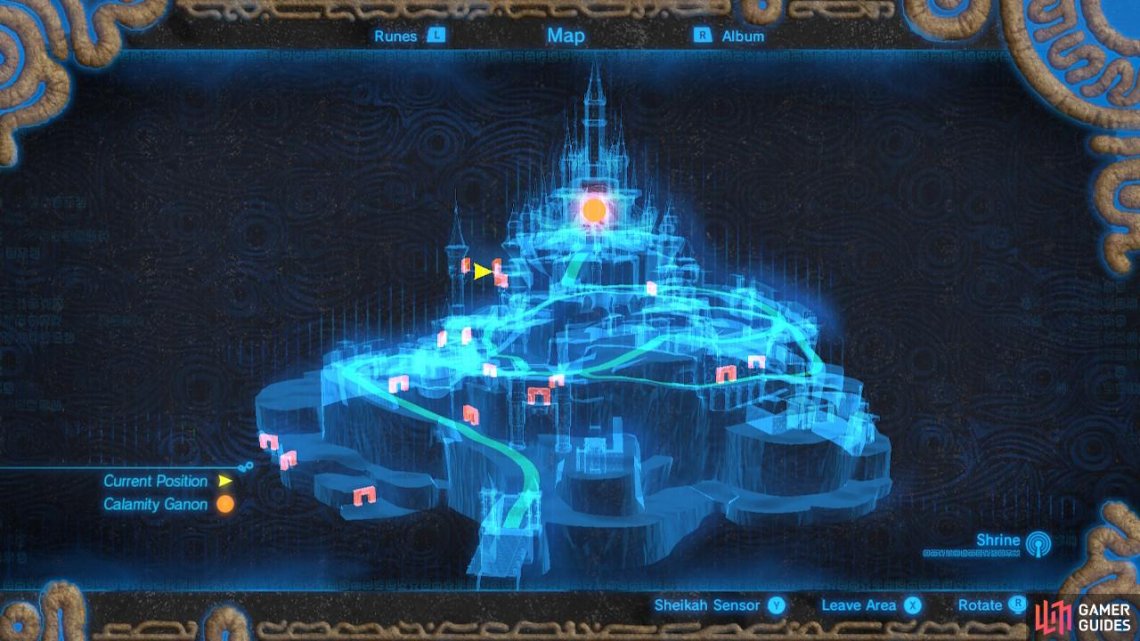 This is probably the hardest memory to recall, as it is located in the fringe of Hyrule Castle. The west, tall spire of Hyrule Castle is actually Zelda’s Study. A bridge connects it to the main building of the palace, and it is on this bridge that you will recall the memory.

The safest way to travel to Zelda’s Study spire is to approach from the east side and cross the moat using Cryonis or the boat and a Korok Leaf. Climb up or use Revali’s Gale to scale the cliffside and then climb up the wall in front of you where you can see the spire. If you climb up the spire along the side that faces away from Hyrule Castle, you will be mostly safe from nearby Guardians. You don’t need to go all the way up to the tip-top of the Spire. While climbing you will see a doorway. Walk into Zelda’s Study. You will know because the location will pop up and you can see a journal you can read. 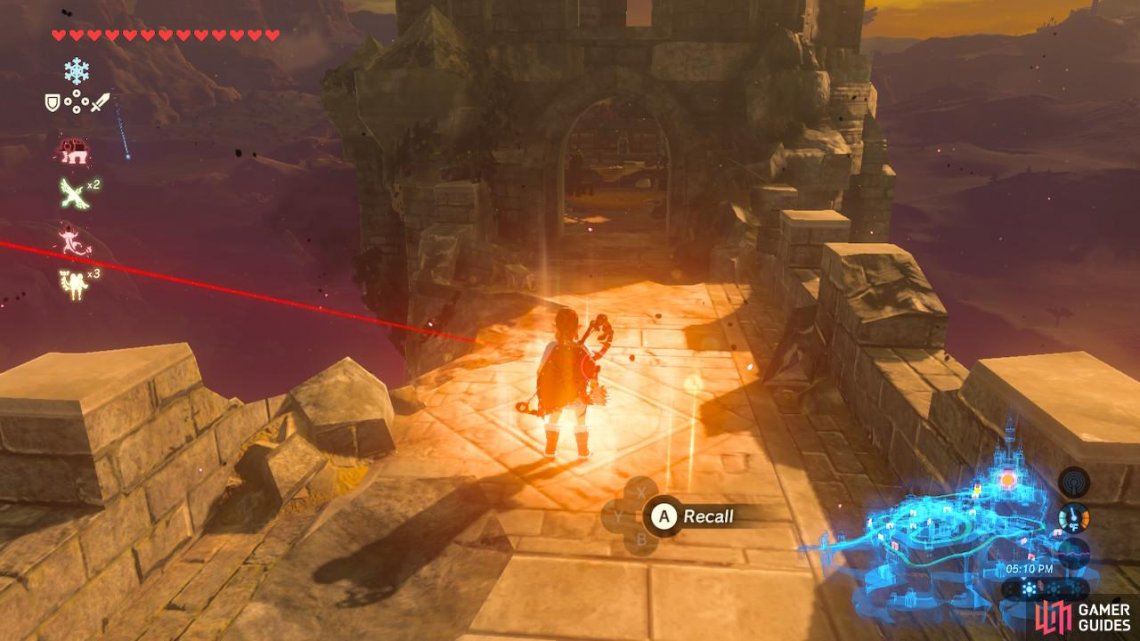 Exit Zelda’s Study to the bridge and the glowing point will appear. Out on the bridge you are fodder for Guardians but if you press [A] to recall their actions will be frozen, letting you trigger and enjoy the cutscene. Then you can use your Sheikah Slate and press [X] to leave the area, ignoring confrontation. 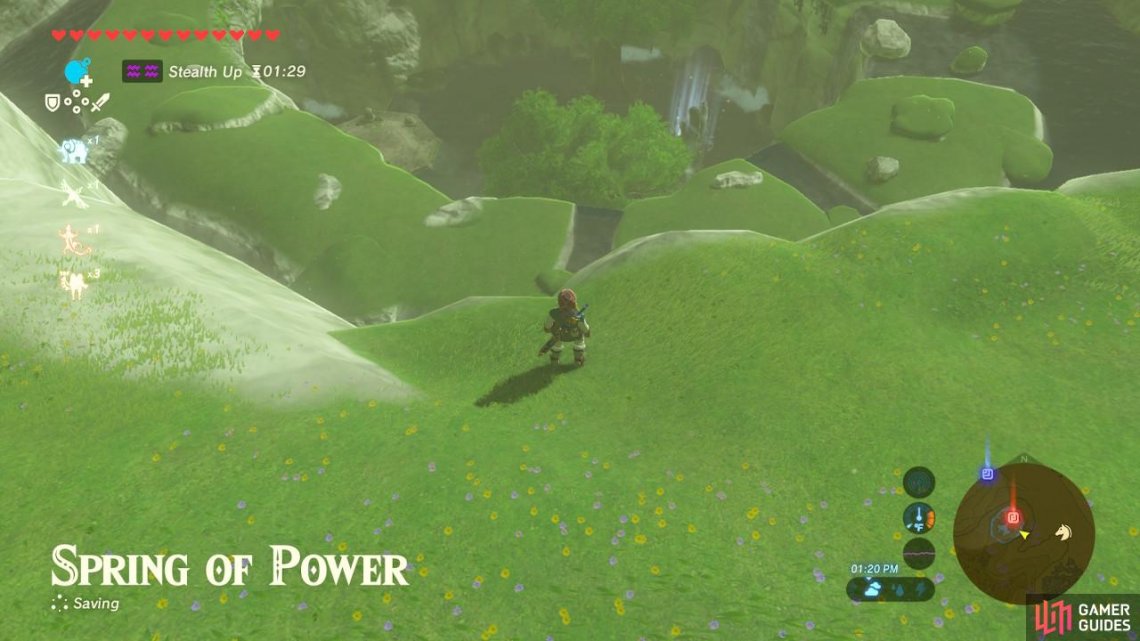 This memory is located in the Spring of Power in the Akkala Region. If you have it unlocked, the fastest way to get there is to warp to the Katosa Aug Shrine, near the East Akkala Stable, and then go west. The Spring of Power is the little lake you can see on the map that is not skull-shaped.

The Spring of Power has a Goddess Statue that you can pray to if you have enough Spirit Orbs, but more importantly on the other side of the lake is the glowing point where you can recall. Make sure you stay within this area if you want to avoid some flying Guardians. 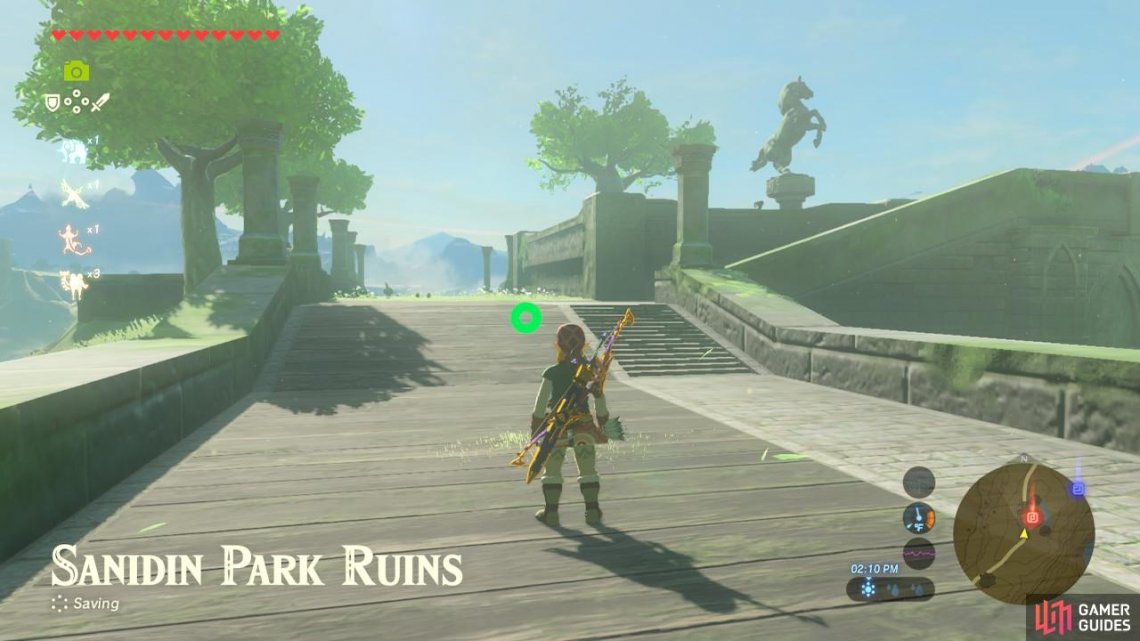 This next memory is located again in the Ridgeland region. You will want to go to the Sanidin Park Ruins, which is just southwest of Hyrule Fields and south of the Ridgeland Tower. The fastest way to get there is to warp to the Rota Ooh Shrine near the Outskirt Stable and follow the winding path across the river and then north.

You will know once you have reached the ruins because the horse statue is fairly tall and very distinct. 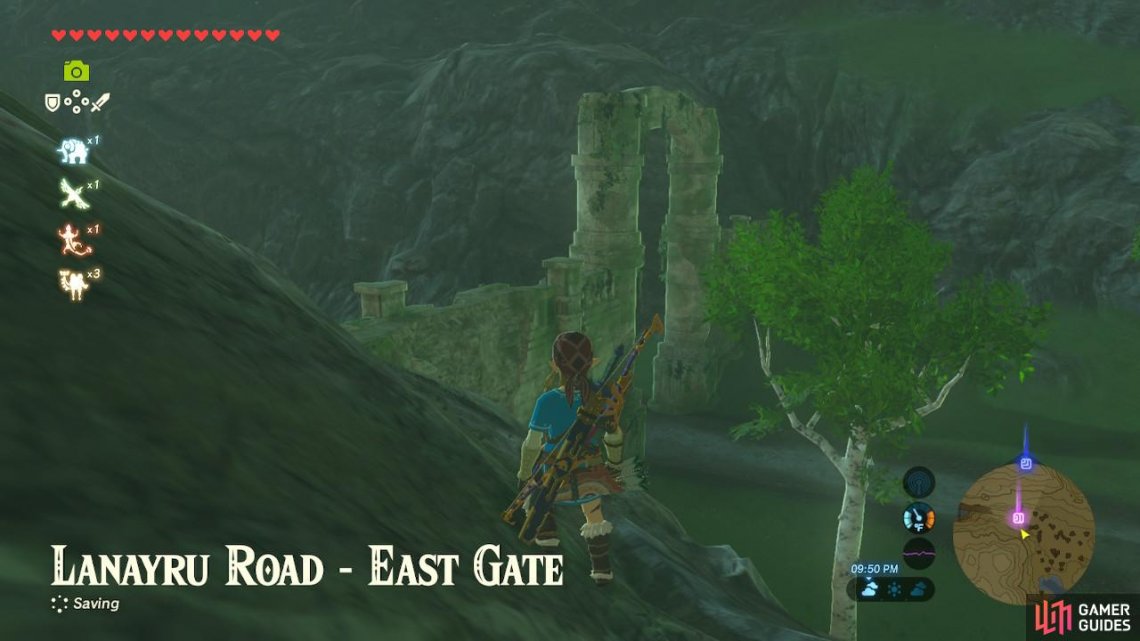 This memory is located at the Lanayru Road - East Gate. The easiest way to get there is to warp to Hateno Tower and begin Paragliding northeast. If you have Zora Armor, you can bypass the mountain climbing and instead ride up the waterfall at Nirvata Lake. Then pass by Purifier Lake and you will see the gate standing proudly above the road.

Walk through the gate a small distance and the glowing recall area will appear. 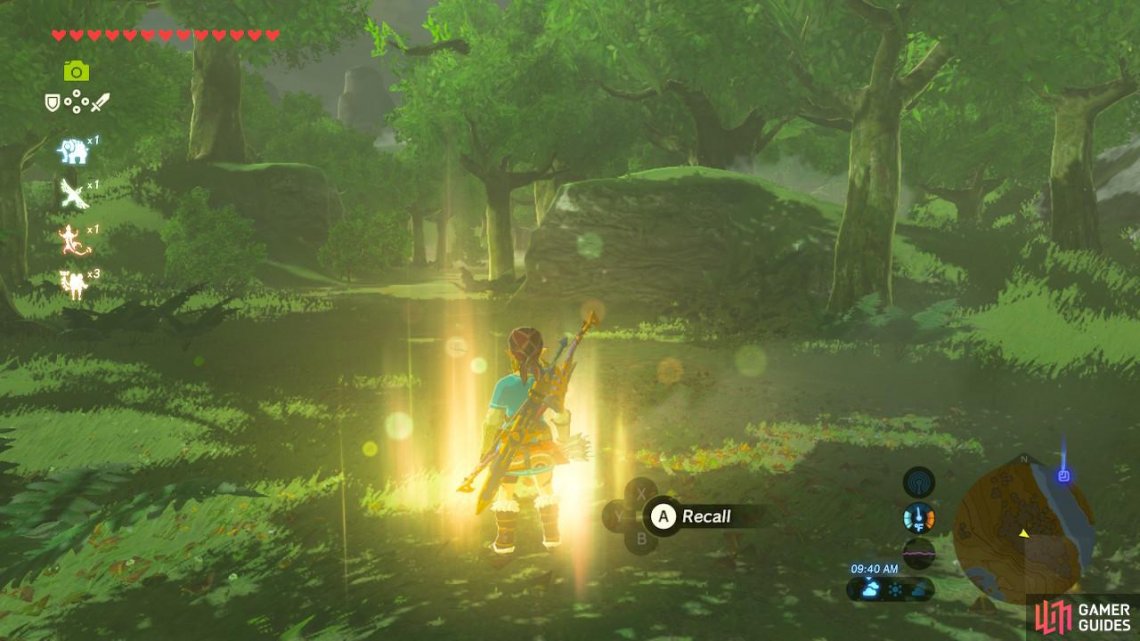 (1 of 3) This recall point might take you a while to find since it’s in the middle of a forest and everything looks the same, but use that large rock as a landmark

The final memory is located in the eastern edge of the Hyrule Field in the Central Hyrule region. More specifically, the memory is located in a small patch of forest directly northeast of the Bottomless Swamp. Look for the random rocks sticking up out of the ground in that patch of forest and if you walk slowly enough and search thoroughly you will find the glowing recall point.

The fastest way to get there is to warp to the Kaya Wan Shrine near the Wetland Stable. Follow the footpath north then east across Rebonae Bridge, and then break off the path to go south in the direction of the Bottomless Swamp. 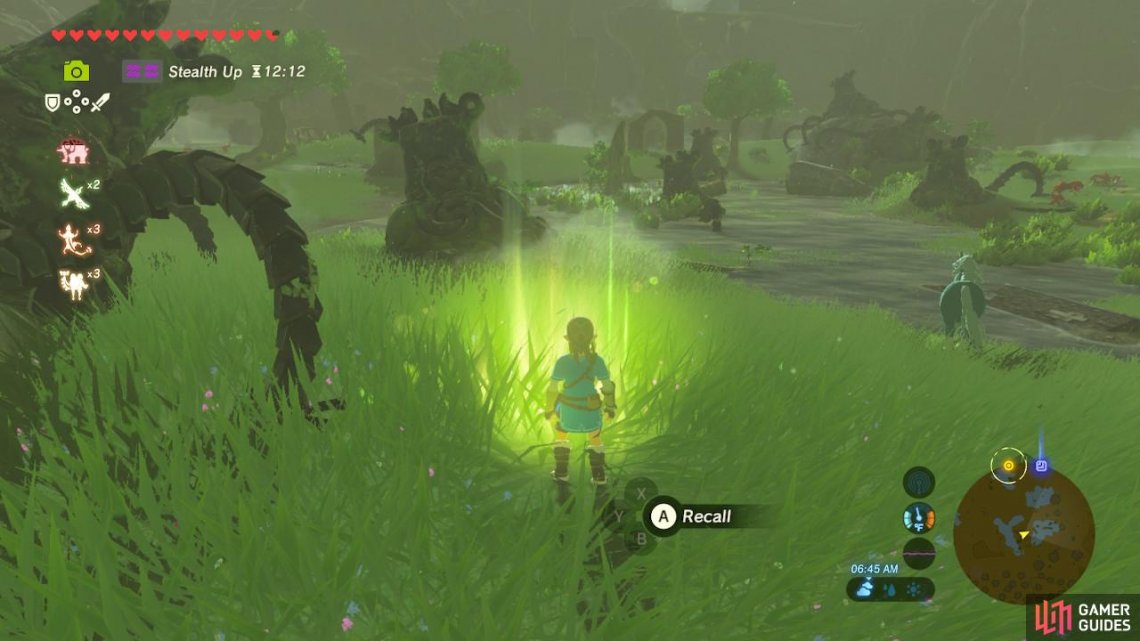 Return to Impa at Kakariko Village as the quest prompts you to. Impa will express amazement at your discovery of all 12 memories and then direct you to a final image that Princess Zelda left in her care.

The image shows a place filled with decayed Guardians. This place will also hold one, final memory for you to claim. After you have gotten this memory, the quest will be complete. Once Impa is done showing you the image, she will say it is located about “half a day’s walk” from Kakariko Village.

Warp to the Ha Dahamar Shrine near the Dueling Peaks Stable and head east. You want to head for Ash Swamp. If you look at your map on your Sheikah Slate, you will see that Ash Swamp has multiple small bodies of water. The memory recall point is located in the strip of land between the south and southeastern bodies of water.

After you have witnessed the tragic cutscene, Zelda will call out to you to come to Hyrule Castle. If you choose to do so and defeat Calamity Ganon, you will see a secret, special ending. 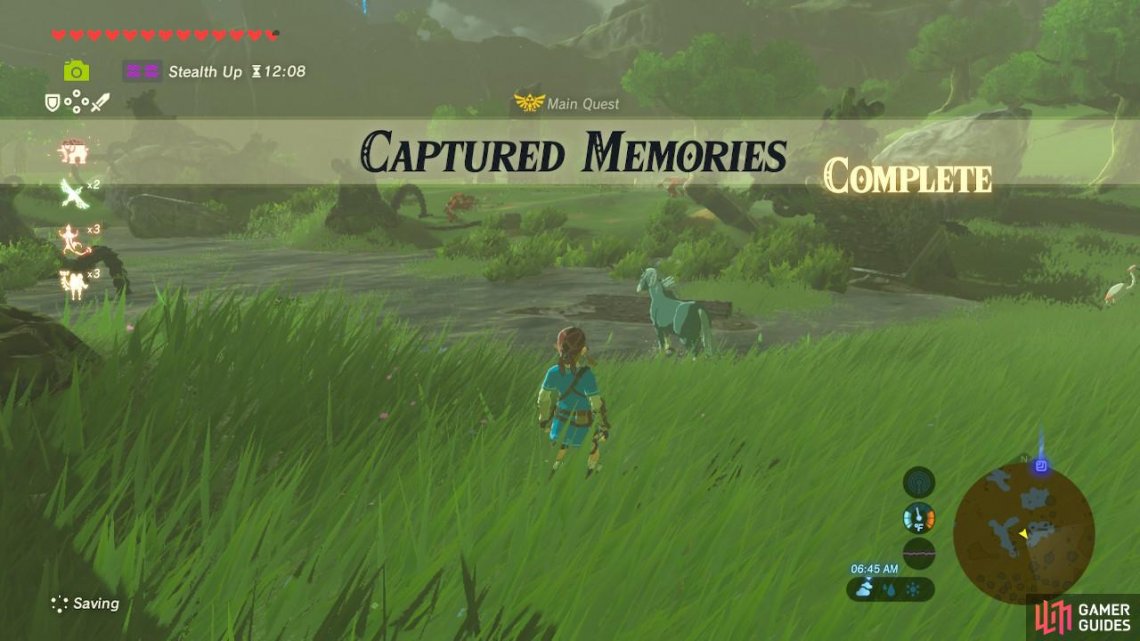