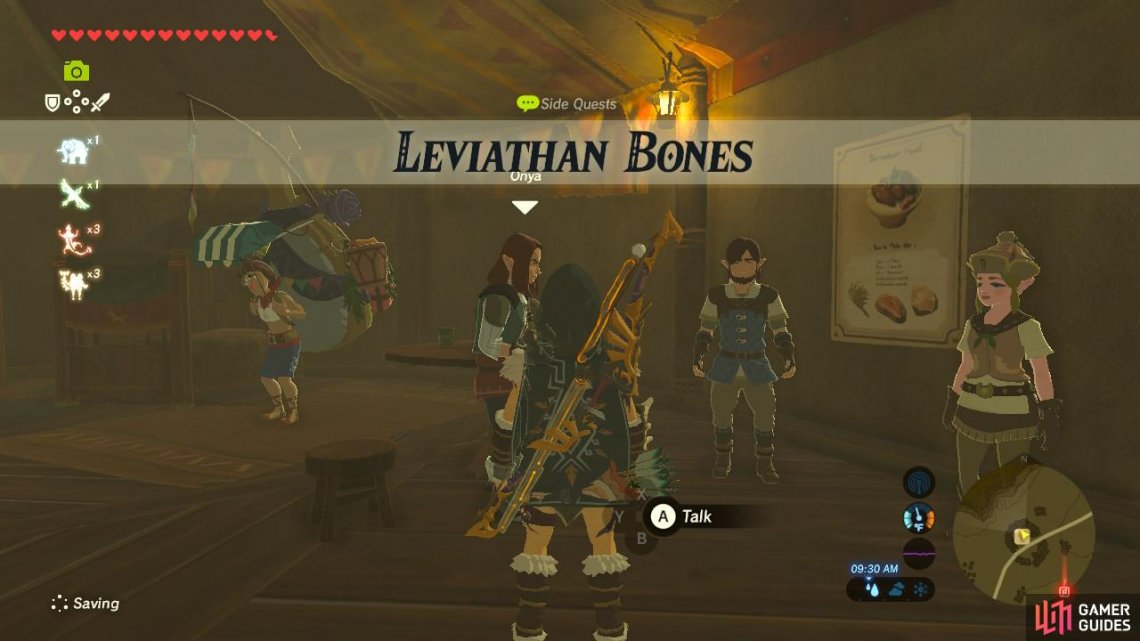 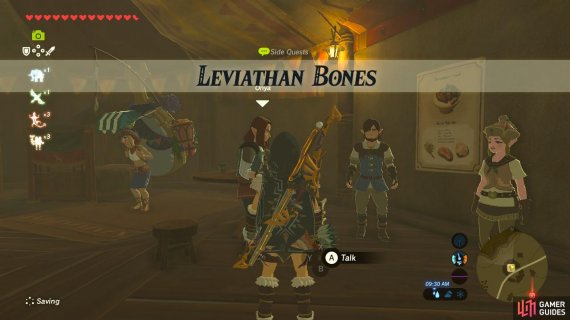 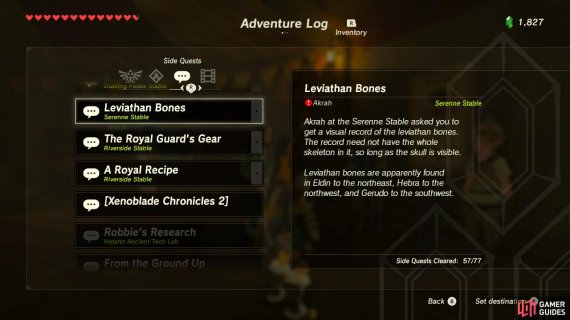 This quest requires you to take photos with your Sheikah Slate (left), It’s pretty lengthy since you will be going all over the map (right)

Since this sidequest involves taking photos, you need to have completed the main quest “Locked Mementos”. Learn more about it here. 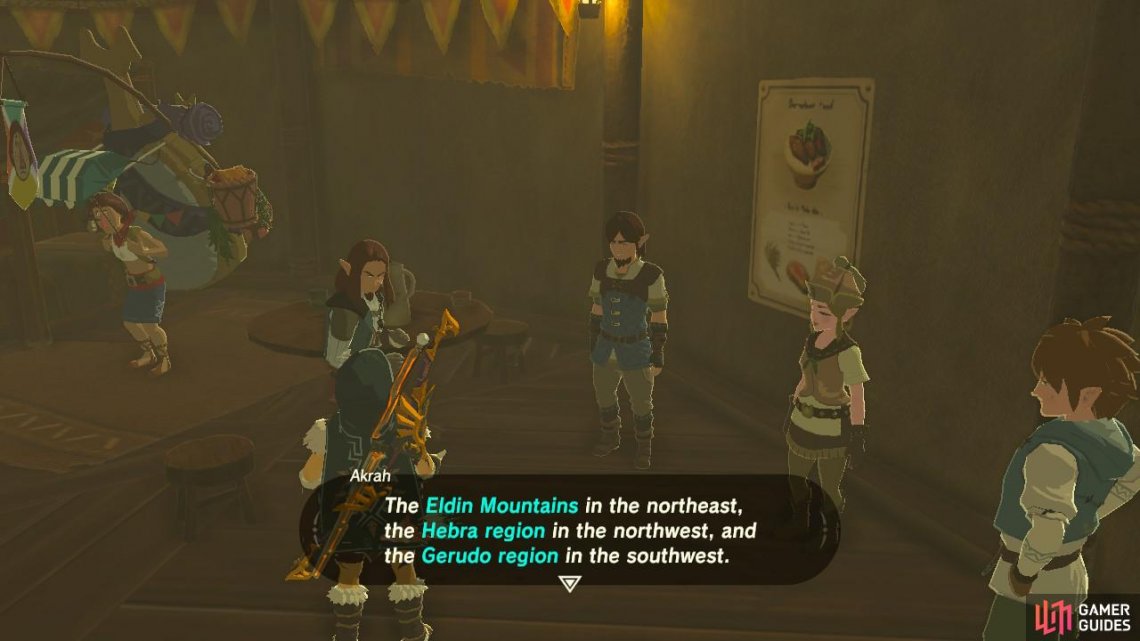 Talk to the group of NPCs at Serenne Stable and Akrah, the leader, will tell you about their research into ancient leviathans and their extinction. Using your Sheikah Slate, he asks you to take photos of leviathan remains on their behalf. 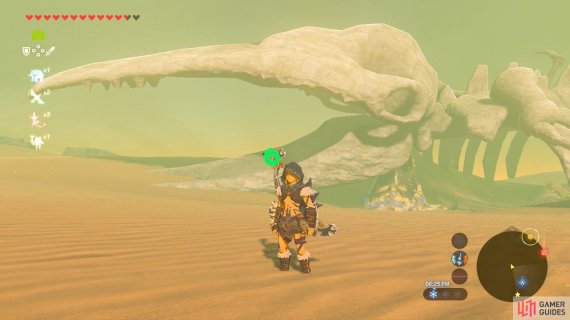 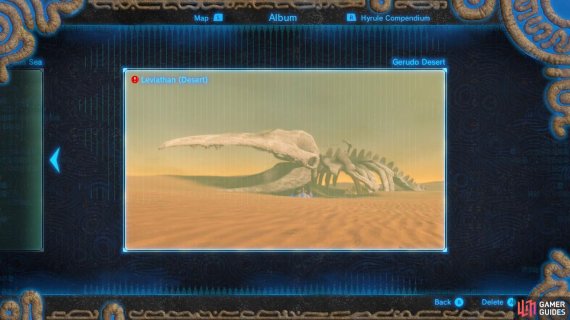 Get out further away so you can get a proper pictures (left), The body is optional, it’s mostly the skull we are concerned with. But we like ourselves a pretty photo! (right)

The Gerudo Great Skeleton is located to the extreme southwest corner of Hyrule. It is on top of the Great Fairy Fountain there and also the Hawa Koth Shrine. From Gerudo Town you can ride a Sand Seal southwest. Even through the sandstorm, do not budge and aim to go straight southwest never turning. You will eventually hit the edge of the map. 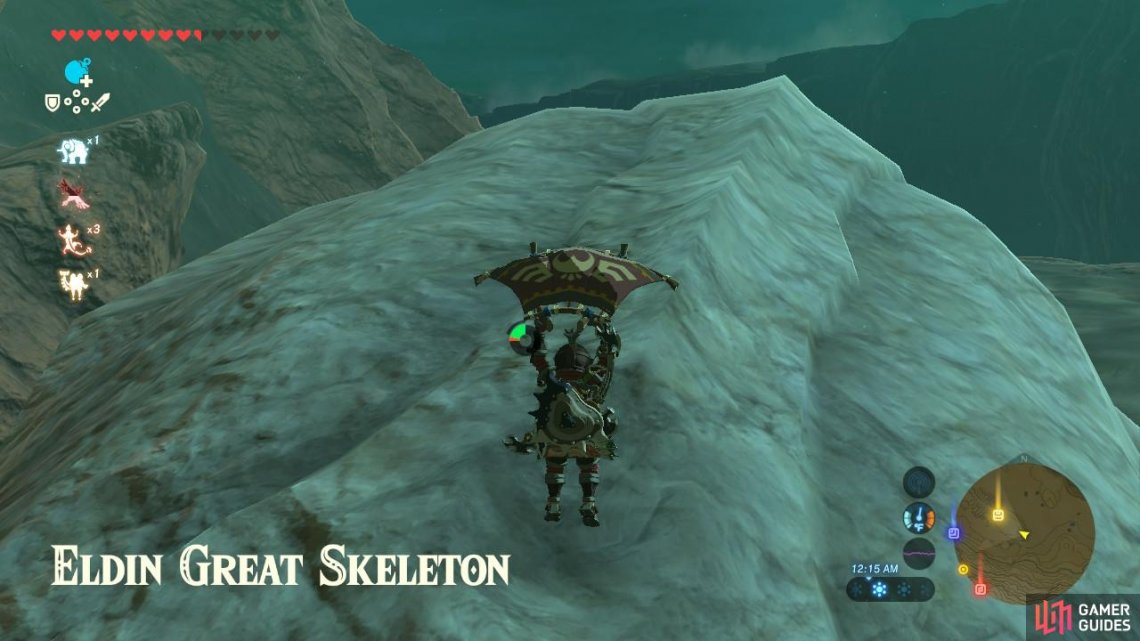 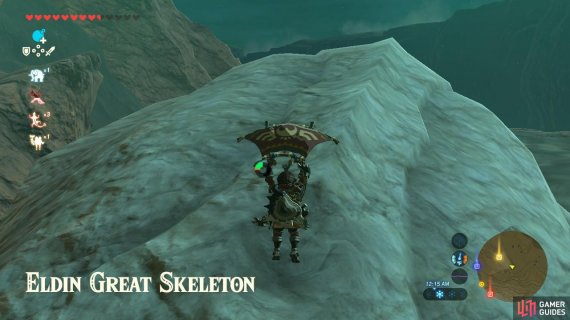 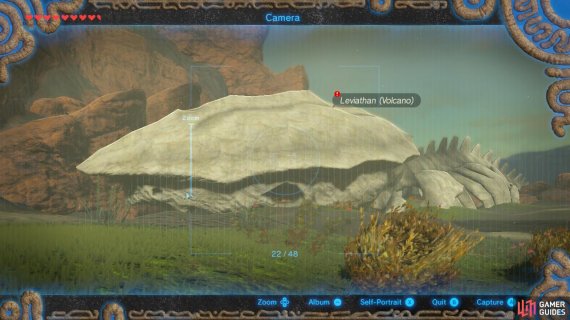 You can Paraglide to this skeleton from the Goron City (left), Again, take your photo from a bit of a distance (right)

The Eldin Great Skeleton is located northwest of Death Mountain near the East Deplian Badlands. 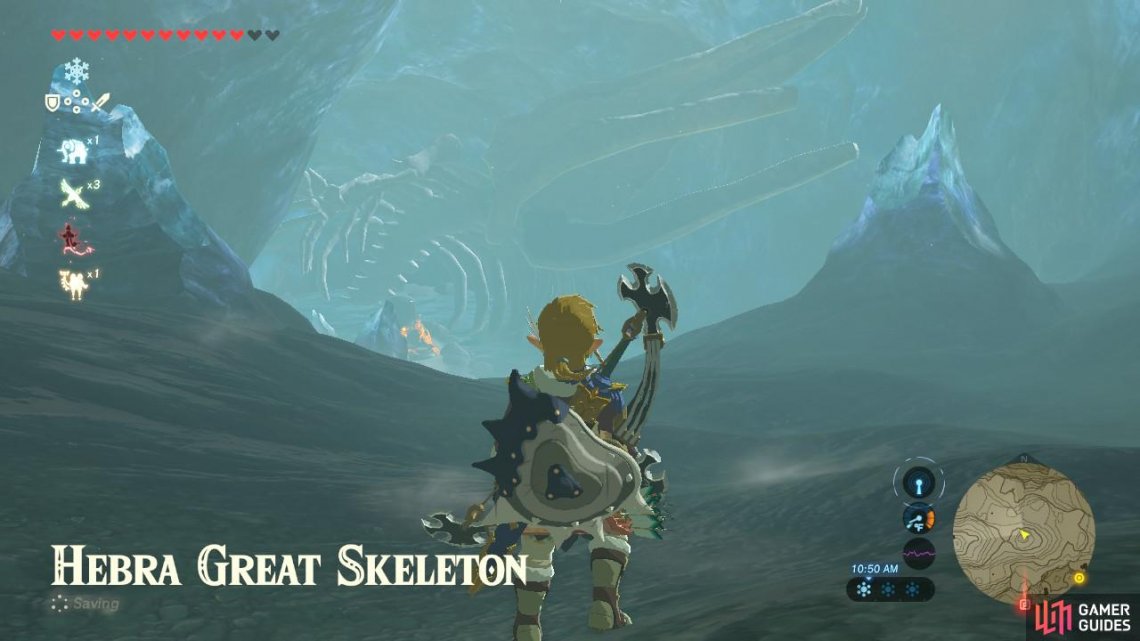 (1 of 2) If you haven’t unlocked this Shrine yet like us, keep reading to learn how to get here 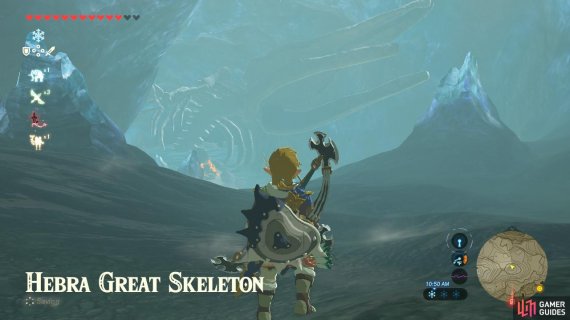 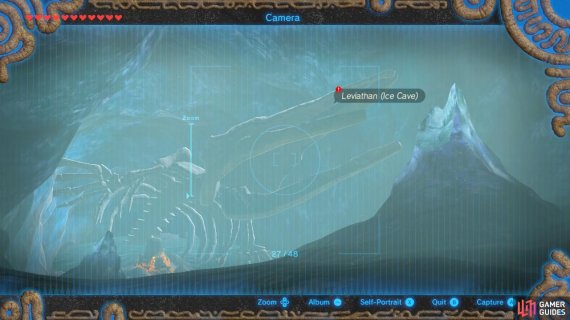 If you haven’t unlocked this Shrine yet like us, keep reading to learn how to get here (left), Then snap a pic of the leviathan’s skull (right) If not, look for a very small, tiny pond east of Hebra North Summit and west of Gellam’s Secret Hot Spring. It is extremely tiny and is not visible on the map until you have zoomed all the way in. Go there.

You will then see past this pond a door. Use Cryonis to place two ice blocks in the tiny pond, forming a little “ice bridge” across it. Then run up the hill and grab a snowball. You will have to grab the biggest one you can pick up, or else it won’t be big enough to knock down the gates. Drop it down at the edge of the little cliff they are on and you will be able to go underground. Take a picture of the great skeleton from a distance so you can fit the skull into the frame. 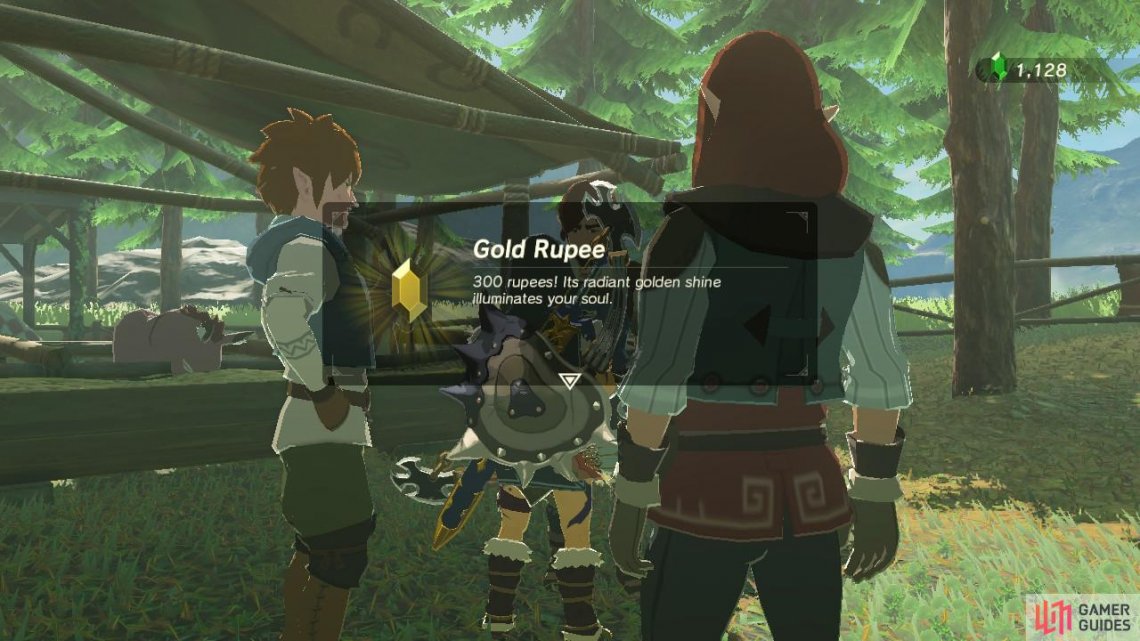 (1 of 2) You will be paid handsomely for your efforts 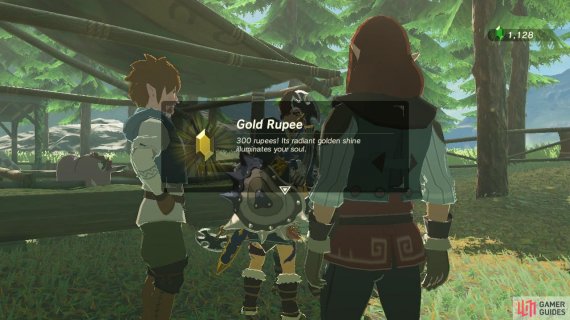 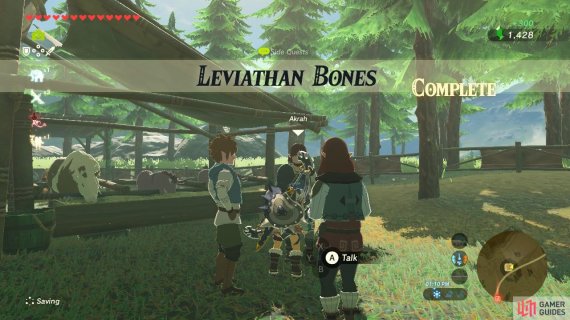 You will be paid handsomely for your efforts (left), And now you have some lovely pictures on your Sheikah Slate! (right)

Once you have a photo of all three skeletons, you can return to the Serenne Stable. You will have to show each photo to each of the three scientists individually. After that, Akrah will give you his promised gold Rupee worth 300 Rupees. Hopefully they don’t argue too much over these photos.