Go forward some and you’ll find a few Bokoblins. Defeat them and you’ll, in essence, reach a fork. Let’s take the right path to the tunnel-esque area formed by the tree roots. Continue along, defeating enemies as you go, to the tightrope. Don’t cross it just yet - first, shoot down the hornet nest on the other side with your Slingshot, then run like hell to avoid being stung. Afterwards, cross the rope.

After this, go onto the ledge on your left and go to the log. Push it down to make a shortcut from here to the area entrance. Go back to the area you arrived at after crossing the rope. Follow the path for some more enemies to fight. Defeat the Bokoblin and the Deku Scrub, then go around the corner and climb on to the ledge.

Follow it to the left and drop onto the ground. Shoot the spiky enemies from the nearby tightrope, then proceed to cross this tightrope. As you do, note that the Bokoblin on the other side probably will try crossing; you can jostle him off. ^_^

On the other side, ascend the ledges and examine the Bird Statue. Use the rope nearby and swing to the ledge opposite you. Go along this path and defeat the Quadro Baba. Continue over to Gorko the Goron and you’ll get a lesson on the Goddess Cubes.

Agree to help him, then hit the Goddess Cube with a Skyward Strike. There are quite a few of these scattered across the surface, and, when one is hit, a special chest in the sky unlocks, making a special treasure available (as per the Gold Rupee story above).

Go back somewhat and open the chest nearby for a Red Rupee . Then return to Gorko and push the log off the ledge to create a shortcut. Drop down and continue. On the other side of the platform, near the edge of the abyss, you’ll be able to hit another Goddess Cube.

Go towards the temple nearby and you’ll find a Bird Statue. Use it, then proceed towards the temple door. Back up some and look up; you’ll see a crystal switch above. Hit it with the Slingshot to open up the temple, and so we’ll delve into our first true dungeon, detailed in the next section. 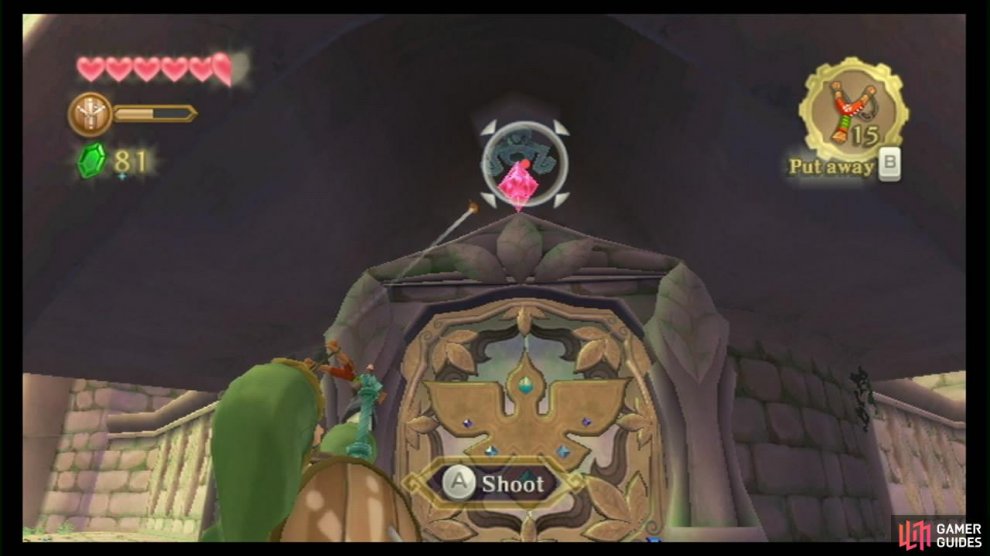