Once you arrive here, you’ll find a few paths you can go on. Ignore the east room; it yields nothing. Go forward to the Bird Statue and use it. Go along the path around the corner to find an Amber Relic, then go to the lower area. Here, you’ll find some more Red Chuchus (you’ve probably fought a few that fell from the ceiling already). Go west to find some Cursed Spumes. You’ll want to get rid of them (Bomb/Bow) fast; their attacks can Curse you!

Afterwards, hop across the lava platforms to the intersection. Go outside by the nearest doorway.

Here, you’ll find a water pool. You’ll have to empty out one of your Empty Bottles soon enough anyways, so do now and fill it with some Water. Then walk to the ledge nearby and dash-jump off. You’ll have to properly maneuver around the stalagmite by tilting the Wii Remote to get to the platform on the opposite side. Once you (eventually) get there, hit the Goddess Cube with a Skyward Strike. You’ll then have to Clawshot the vines, heading to the ledge above and behind the waterfall. There, you’ll find a Gossip Stone if you play the Goddess Harp in the proper place, and you can Bomb the cracked wall to find a chest with a Silver Rupee inside.

Finish up anything else you have to do here, then return into the cavern and go up the incline, defeating the Red Chuchu on the way, then going through the archway. You’ll find Gorko in this room, who will speak about Goddess Cube. Fi will now let you dowse for Goddess Cubes (disclaimer: only helpful when not using my FAQ :P ). You’ll notice a frog-like statue implanted into the wall. Equip your Water Bottle, then approach the figure and dump the water into it. 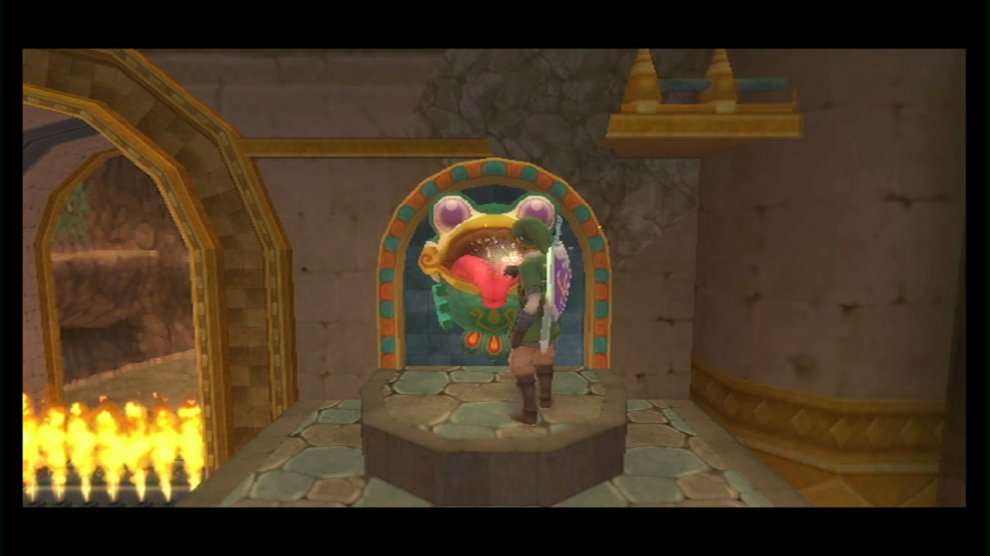 After the short resulting scene, look around for a group Blessed Butterflies and play the Goddess Harp to make a Gossip Stone appear. Speak with Gorko, then Bomb the cracked wall on the west side of the room to find a few dig spots. Backtrack to the water spring and refill your Bottle, then go back to Gorko. Clawshot the vines on the wall on your left, then get onto the above ledge. There, pour your Water over the edge of the ledge into the statue’s mouth.

After a short scene, go outside to find a blazing gate and a much larger and unreachable statue. You’ll quickly notice you won’t be using your Empty Bottle for this one. Use the nearby Bird Statue, then go into the western room to find an open window. Climb onto the windowsill and Clawshot to a floating platform and further along. Eventually, you’ll find a Goddess Cube. Hit it with a Skyward Strike, then drop down.

Here, return to the water spring and you’ll meet up with a Mogma. Speak with him to learn that, obviously, Lake Floria to the southeast would have enough water to fix your problem. Fi will then mention the water basin Faron was using back when she was healing. Maybe we could get her to bring it here…

Anyhow, go a Bird Statue and return to the sky. Fly and descend within the green light, landing at the “Floria Waterfall” Bird Statue.