Once you arrive, go forward to the Bird Statue and examine it. Then look to the west. You should see a large boulder atop a platform, consequentially blocking your path. Also nearby should be a cactus with a Bomb Flower on it. Pick up the aforementioned Bomb Flower with your Hook Beetle and drop it onto the boulder. Hop across the platform and to the opposite ledge. Go downhill to the end of the path. If you look to the southeast and down, you should see some sparkling. Send your Hook Beetle there to find a Small Key. 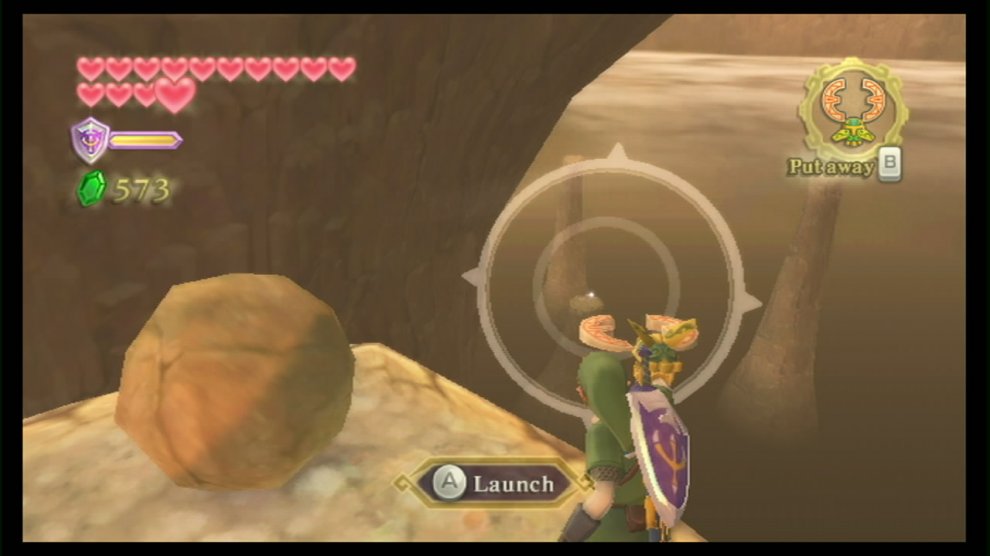 Afterwards, go back uphill and open up the locked door. In the next room, cross the gap by Clawshotting the Peahats and the Clawshot target at the end of the path. Proceed to the next room and you’ll find a Timeshift Stone underneath some rubble in the mine cart. Trigger the Timeshift Stone and speak with the robot nearby. The mine cart should soon begin to move. Follow it to and through the doorway nearby – you open the door with the nearby floor switch.

Here, you’ll watch the cart go along a different track while a bridge, made within the Timeshift Stone influence, is made. Go along the bridge and then climb up the vinery on the right at the end of the path. Go up and step onto the floor switch, then drop down and follow the mine cart. Follow the bridge that is formed soon. When possible, go around the corner and climb atop the higher platform that first appears, then go up the vines to the next ledges. Further ahead, slice apart the Deku Baba and Clawshot across the gap to some more vines. Get onto the ledge and step onto the floor switch, and the mine cart will continue forward. Clawshot back across the room onto the vinery, then start going left. Continue to the gap in the wall; use the “Leap” command when the gusts of air have ceased. Once the bridge platforms start to appear again, step onto them and Clawshot to the target across from you, and continue this. At the ledge, step onto the switch. Continue and start Clawshotting the targets once they’re within the influence of the Timeshift Stone, then, at the end, Clawshot to the vinery above the doorway. Drop to the ledge below and step on the floor switch. 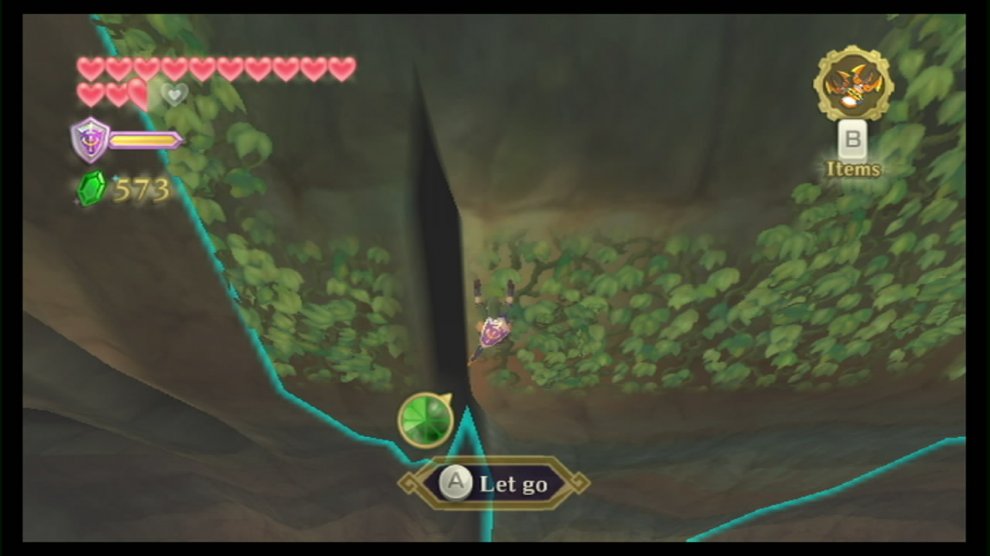 Once you finally continue to the next room, defeat the enemies that arise from the past. Eventually, the cart will be blocked by some bars; use the Whip to bring the wall switch on the other side down. Continue along, past some more enemies, then you’ll need to start using the Whip to swing across the gaps, using the posts above the gaps. Further ahead are some Blade Traps – you’ll just have to avoid them to the best of your ability. At the end, the mine cart will be blocked by a door. Backtrack a bit and dash up the quicksand hill, being sure to grab the Stamina Fruit as you do. Back on solid ground, pull down the wall switch, grab a few hearts, and continue to the next room.

In the next room, you’ll pretty much be walking alongside the cart while you fend off the enemies. About halfway through, you’ll be stopped by a Beamos. Defeat it and continue to the door. Defeat both of the Beamos nearby, then Whip the wall switch on your left to open up the door to the outside.

Outside, go along the bridge that is formed by the Timeshift Stone’s influence, defeating the Deku Babas as you go. Soon, the cart will get stuck by some rocks. Look north and you’ll notice some Bomb Flowers on a wall. Launch the Hook Beetle to them and drop one Bomb Flower onto the rocks (the brown ones; we don’t exactly want to fall!) Further ahead, you’ll find two more Deku Babas and a Quadro Baba. Defeat them and proceed back to the entrance area. 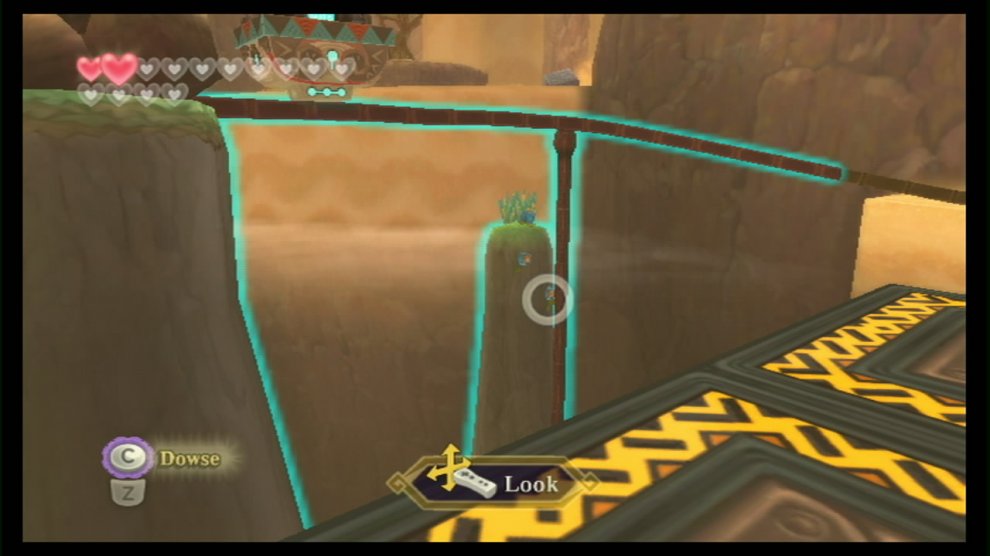 Here, the mine cart will proceed onto a switch and increase the influence of the Timeshift Stone, which includes reviving the Thunder Dragon from the dead. Speak with him to learn that he is sick and cannot sing his part of the Song of the Hero for you. Speak with him to learn that a seedling from the Tree of Life was planted; it is supposed to bear a fruit that is a cure-all. He’ll point you to the location of it.

Go northeast to a new bridge and follow this path to the quicksand. Dash across it to the platform in the center and get on there. Clear away the large mound of sand via the Gust Bellows to reveal a Timeshift Stone. Strike it and you’ll find the seedling. Dig up the Life Tree Seedling and speak with the robot nearby. Now, go around here – you can find a few Ancient Flowers and the last Goddess Cube I’ve found in the game.

Afterwards, use Hook Beetle to trigger the mine cart Timeshift Stone, then go back along the path. Then use the Bird Statue to return to the sky.