Upon arriving, descend and tilt more northward towards the rainbowed island - you can’t miss it. Also watch it - the birds in the area will try to attack in earnest.

Once you reach the island, dive onto it to quickly meet Levias, who is very obviously possessed by some beast. And so, you are to battle him.

Once the battle begins, collect any hearts around the island you may need. You can also use this place for some health restoration when needed. Afterwards, dive off the edge and call your Loftwing.

Once you do, the battle begins. It is actually quite simple – there are four eyes trailing behind Levias. You are to Spiral Charge into all four. The bad thing is that this battle is pivotal primarily based on your control of a Loftwing (which is hard enough in this game when you demand accuracy). Then there is that Levias is about as fast as you, then that if the tail or eyes’ optic nerves hit you, you lose a heart.

I tend to try to approach Levias from the side. He is generally circling during this battle, so I kind of make a chord in the circle to beeline for where his tail end will be. Then I try to Spiral Charge an eye and repeat.

The battle ends once you eventually hit all four eyes. 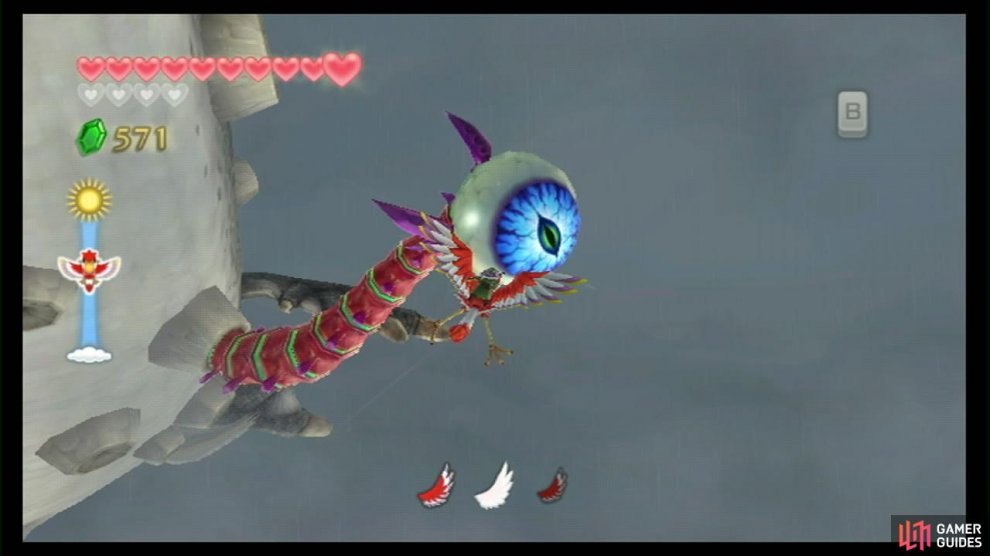 After this, a creature emerges from what could be Levias’s blowhole. Fly above Levias and slowly descend towards the lighter portion of his back, then dive onto it, tilting forward for the utmost accuracy. Upon a successful landing, this boss will begin.

During this battle, the Bilocyte’s primary motive of dealing damage will be to shoot green orbs of poison at you. Begin by moving to around the middle of the platform. There, you are to counter the orbs by swinging at them with your sword. Hit one with a left-right horizontal slice, and another with a right-left horizontal slice, to hit the boss’s head wings. Then hit another orb vertically to stun the boss, then go up to it and bash it with your sword.

Repeat the above process and deal enough damage to the eye to continue.

For the second phase of the battle, move as far away as possible from the boss. It will continue to throw the yellow orbs at you, but also will move after shooting the orb. Using the same “physics” as before, hit the orb at the head. You can continue to do this for a while. Alternatively, since your Master Sword has a long range with the Skyward Strike, you can attack it directly with those. However, that would put you in more danger, but it WOULD end the battle quicker.

The Legend of Zelda Skyward Sword - Levias and Bilocyte Fight

Okay, then. After the battle, Levias will finally regain control of himself. Speak with him and you’ll learn some more about the Triforce, but still not its actual location. To find it, you need the Song of the Hero. It was broken into four parts, which are held by four dragons: the Water Dragon, the Fire Dragon, the Thunder Dragon, and Levias. You need to visit each of them (Levias is the last) to find the proper portion of the song.

At this point, we have only two choices of where to go: the Faron Woods or Eldin Volcano. I say two, because that brings me to my main point.

You need to save the Lanayru Desert portion of the Song of the Hero for last. If you do get the song piece there first and speak with Golo the Goron in the Lanayru Caves twice, you are completely and utterly unable to complete the game, due to a game-breaking glitch.

As such, I’d prefer that you go with the order of these as proposed in my walkthrough: Faron Woods, Eldin Volcano, then the Lanayru Desert.

Anyhow, exit the Thunderhead and head further southeast to the Faron Woods. Land within the green light beam, as per usual. Descend in the Sealed Grounds.