Outside, you’ll find Ghirahim at the bottom of the pit with Zelda, performing a ritualistic, freakish dance to summon back Demise. He’ll send up massive swarms of enemies to delay you.

The majority of these enemies are plain Bokoblin, which can be dealt with in one slice by now, but they come in swarms, so expect many spin attacks and Skyward Strikes. Your goal is to simply continue down the path – however, I highly recommend actually defeating the enemies on the way, because you will be blocked at certain points, and no one wants hundreds of Bokoblin in their face, Master Sword or not. 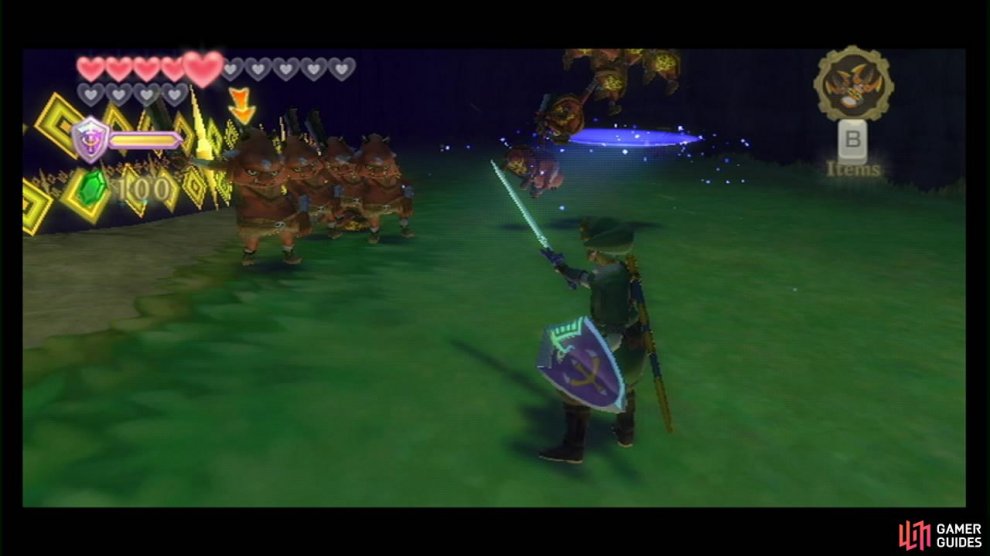 The first of these blockades will have a group of weapon-wielding Bokoblin, numbering five or six. Defeat them and continue down. As you do, be careful of the Bomb-wielding Bokoblin – you’ll probably get hurt if you try to hit them with the Bombs in their hands, so wait until AFTER the Bomb is gone, then deal some punishment.

The second blockade features three Moblins. You’ll pretty much be able to use the jump-over-the-shield thing I keep mentioning. Afterwards, continue down. As you do (yes, more enemies. Starting to love that Heart Medal?), you’ll find some more Bokoblin. In addition to the Bomb-wielders, you’ll find some with weapons. 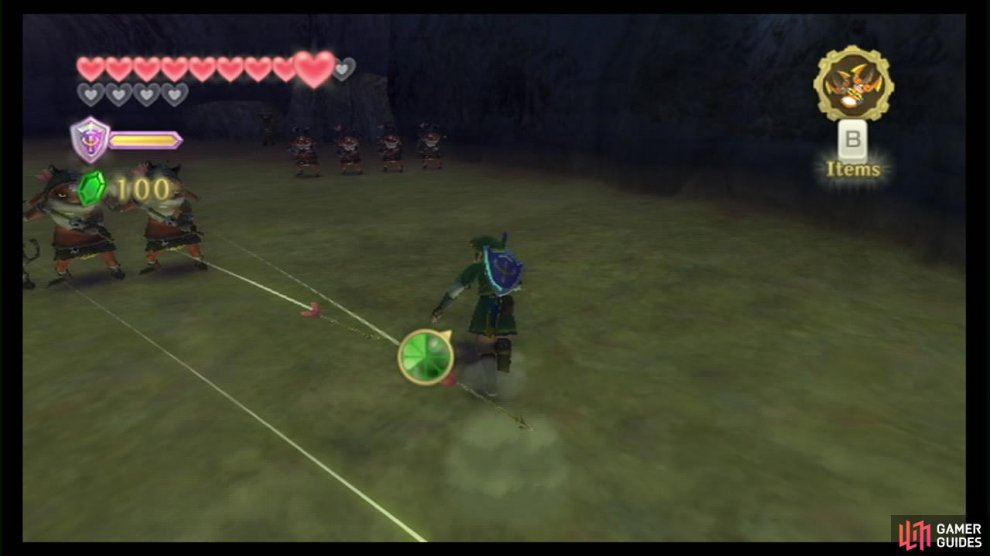 The third blockade features a more-annoying blue Bokoblin. Defeat it and continue along the path. As you do, there will be some Bokoblin Leaders in the group. They can make the swarms impossibly more massive, thanks to their horn calls.

The fourth blockade features two Stalfos. You can take care of them, I’m sure. Just try to use spin attacks so as to deal with other Bokoblins. Further on down the path, you’ll end up fighting all types of Bokoblins, including the Archers, so keep your shield up (no bashing if you have the Hylian Shield ^_^).

At the bottom of the pit, Ghirahim, infuriated with your speed, will futilely summon a last wave of Bokoblin. Defeat them and you’ll soon fight Ghirahim.

This first part of the battle is rather easy. Ghirahim is now covered in some metallic substance, and cannot be really damaged all to easily. If you hit him, all you do is push him back. Seeing as you’re on a platform high above the ground, keep hitting him to push him back, using your shield whenever he tries to attack you.

After Ghirahim falls off a platform, jump off of it yourself and do a fatal blow. Continue the cycle described above. Eventually, Ghirahim will start making his hands purple near the edge of a platform. When he does, carefully note their positions and slice between them so as not to touch them. There is a fair space of time before he does anything. However, note that if your sword does touch the purple hands, you and he will reverse positions, so quickly move back around! Continue the cycle until Ghirahim summons his weapon.

For this second part of the battle, Ghirahim will swing at you when you’re close; shield bash his attack. In fact, any time he directly attacks you, shield bash him and, while remaining locked-on, do a thrust to hit the gem in the center of his torso. You’ll want to remain close unless you’re, sadly, taking time to heal – if you’re too far, he’ll merely shoot the red missiles from battles past or a large disc of energy. Both can be shield blocked. However, the disc can also be hit with your sword in a back-and-forth volley with Ghirahim until you succeed in hitting him with it, stunning him, much like the Phantom Ganon bosses of Wind Waker. Anyhow, continue this until he summons his big sword – makes me think of Cloud Strife, almost.

For the third part of the battle, with the large sword, you’ll need to get close and attack directly. Ghirahim will use the sword to block – if he blocks with the sword vertically, do horizontal slices repeatedly; if he blocks horizontally, do vertical slices. Continue to slice this while targetting him (and do it fast – he’ll soon jump back and heal his sword). Once you cut through the sword, do a thrust to damage him. Repeat a few more times and you will win.

After defeating Ghirahim, there will be a few story cutscenes. More or less, Demise is unfortunately summoned back, and then challenges you to a battle in another place. He leaves while letting you prepare for the battle.

This is your last chance to do any other preparations – once the battle with Demise will begin, what you bring is all you get. I still highly recommend bringing along the Hylian Shield and two Heart Potion+ (I only used one; the second was for back-up). Of course, in the end, you decide what you bring. Before the battle, heal up by sitting in the chair in the Temple of Hylia, then go to the Bird Statue and save. Proceed to the portal of darkness in the pit below, and confirm with Fi that you are ready to fight for the fate of the worlds above and below the clouds.