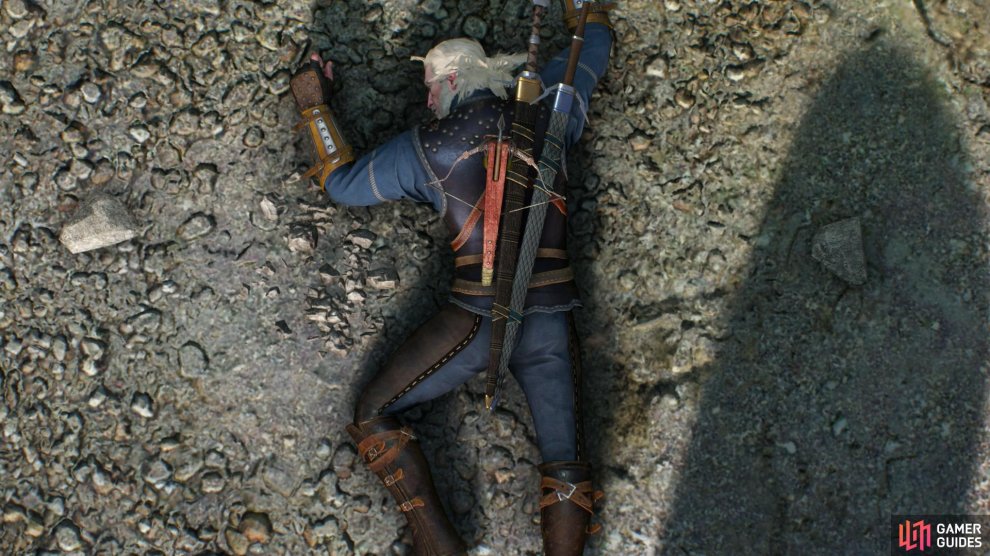 You've finished your search for Ciri in Novigrad, seems like Skellige is the only place left to search. Maybe Yennefer has been more successful in her search?

Track this quest and you'll spot three search areas; three ship captains you need to talk to along the western end of Novigrad, between the Golden Sturgeon and Crippled Kate's. The norther-most ship is captained by a woman who has good reason to never to travel to Skellige again. Board the western-most ship and talk to the crewmen, who are busy at work to learn that the captain is delinquent again. Looks like this one's a bust, too - be sure to loot it for wasting your time, though. Time to explore the southern-most ship, near Crippled Kate's. Here you'll find where you'll find Captain Liglad on the deck of his ship. He'll refer you to someone named Wolverstone, the captain of the ship "Atropos", who is at the Golden Sturgeon.

Head over to the Golden Sturgeon to find Captain Wolverstone on the main floor, drinking away. Talk to him to find out that he's sloshed... and getting passage on his ship will cost you a hefty sum of 1000 Crowns. At this point in the game, though... well, it's not chump change, but you should have enough to spare. Pay him and tell him you're ready to go and you'll set sail.

Geralt will wake to the sound of trouble outside - a proper Skellige welcome. Head outside and fight off some Pirates (levels fourteen, fifteen and sixteen). After a cutscene Geralt will arrive in Skellige, although not in the most graceful of manners. Geralt will fend off a Skelliger trying to collect his harvest, after which you'll be able to question him. Doing so will reveal that a witch has become the guest of some "Crach" character, in Kaer Trolde. Might that be Yennefer? In addition to this bit if info, the handsy Skelliger will give you directions to Kaer Trolde before departing.

Loot the beach to the south and, on a body behind the largest remaining section of the boat (the one with the mast) you'll find a corpse with 1050 Crowns on him, among other loot. Looks like you get to keep the money you paid to get here after all. There's also plenty of containers to loot around here. The dead sure don't need it anymore, and it's better off in your hands than in some Skelliger's.

New area, new signposts to find, villagers to explore, Merchants and Innkeepers to play Gwent with (yes!), and map markers to clear. Might as well clear your way north to Kaer Trolde and get established in Skellige. First head west into the shallows, where you'll find a Place of Power, and north of a it, a shipwreck bearing a Monster Nest. Kill the Sirens (level thirteen) flying around by shooting them down with your crossbow (auto-aim usually does a fine job of this) then hit them with fast attacks. Once they're gone blow up their nest with a bomb, kill the Ekhidna (level nineteen) that spawns, then loot the nest and the other various containers nearby. After all that, claim the nearby Place of Power. Things are starting out well in Skellige! You know, aside from that whole shipwreck thing.

Note: Ekhidna and Sirines can drop Sea Shells and Shells, respectively, which appear pretty worthless at first glance. You can, however, have craftsmen dismantle them, freeing the Black Pearls and Pearls within. Both of which sell quite well, making it potentially very lucrative to kill such beasts. Unfortunately many Sirines and Ekhidna you kill will be in water, making their loot unrecoverable, but you should still gain plenty of Pearls and Black Pearls while exploring Skellige.

Continue looting the shore to the west to find some skeletons and a chest near the husk of a smaller, wrecked ship. Backtrack east, then follow the coast in that direction, picking your way over the sunken ship and swimming your way east along the sheer cliffs until you find a Mucknixer Nest. Kill off a half dozen of so Mucknixers (level fifteen) then blow up the nest. A stronger Drowned Dead (level eighteen) will arise to oppose you. Put it down and loot the nest, as well as some corpses nearby.

Head uphill to the north until you find a road. Head north-west a short distance to where three road meet to find the "Crossroads" signpost. Yes, another one. Every area has a "Crossroads" signpost, it seems. You can fast travel back to Novigrad/Velen from any signpost on Skellige, which is convenient enough. For now, though, follow a road to the south, then east, and up a hill to find a Wyvern (level sixteen) lurking about its nest. Kill it and loot the corpses nearby to knock off a rather unrewarding "Guarded Treasure" event.

Return to the "Crossroads" and follow the road north and north-west until you find a fork to the north-east. Take the fork to the north-east, as it leads to some crypts where we can start the quest "Peace Disturbed" by talking to two Skelliger women. It's a level twenty-five quest, but if you've been following the guide, you should be able to do this easily enough, even on Death March difficulty.

Apply some Specter Oil to your silver sword and head into the crypt, where you'll be able to search the first chamber in relative peace. Put your loot goggles on, because there's a bit of it to be found in these crypts. For starters, score a lucrative chest near a sarcophagus north-east of the entrance, then head down a tunnel to the north-west.

Travel down two flights of stairs and loot two chests, along with some other containers, then head into a large room to the south-west, where you'll find several Wraiths (level twenty-four). Banish the spirits, loot around, then head down some stairs to the north-west to reach a flooded crypt occupied by whatever Wraiths didn't attack you upstairs, as well as a Nightwraith (level twenty-five). Dispatch the lesser Wraiths first, then focus on the Nightwraith, who fights the same as every other Nightwraith you've encountered. Once the ghosties are dead, search the room for chests and various other containers then loot a corpse with the sword "Daystar" on it.

Search a wall to the south-east to find a weak, Aardable section. Blast the wall then search beyond the rubble to find some... Han Fiber? Ah well, they're not all winners... Seriously, though, scale the ledge to the south-east and score a chest, then turn north-east, head up a ramp, scale another pair of ledges and continue down a passage to the south-east, jumping gaps and scaling ledges as you go. Eventually you'll reach a dead-end chamber with a hole in the ground to the south-east. Scale a rock to the east to find a chest hiding behind it, then drop down the hole.

Reach the chamber below and search to the north-west to find a chest in an alcove. Once done, head up some stairs to the north-west, continue through a chamber in the same direction, then turn south-west and scale a ledge and Aard some rocks to reach daylight. You can now head south and talk to the old ladies at your leisure, just make your way to the west to reach some roads and follow them south. Along the way, east of the road, you'll spot a merchant. He'll sell you a bunch of maps which reveal signposts when you read them, albeit at significant cost. Save some money and just walk (or ride, or sail) everywhere. Deal with him as you wish, but return to the ladies for your meager reward.

Continue along the road to the north-west until you come to another fork to the north-east - this one should be ignored. Instead veer off into the wilderness to the west and head uphill until, near the coast, you find some gravestones over-looking the sea. A trio of Wraiths (level seven) will arrive and challenge you. Banish them, then loot a chest and a corpse to finish this "Guarded Treasure" event.