Ladies of the Wood - The Whispering Hillock

Continue along the road until you come to another fork, stick to the south-west, which will lead you to the Whispering Hillock. When you cross the threshold of the rather large search area you’ll hear a disembodied voice, which starts the quest "The Whispering Hillock" . The worst you’ll have to face here are Wolves (level five) and a Warg (level eight). Explore south-east of the center of the search area to find the "Ancient Oak" signpost, then head west of the large tree in the center of the search area to find a Place of Power guarded by a Werewolf (level eight). Use Igni to soften the beast up, then Quen to protect yourself. That, and some fast attacks with your silver sword should be all you need. From the Place of Power turn north-east and climb a ledge to find a cave.

Head inside the cave and dive into some water to the south. Swim further south to reach a small chamber dominated by a natural stone column. Search behind it to find a chest filled with valuable loot, then swim down a tunnel to the north-east and loot another chest to your left as you go for more quality loot. Surface when the tunnel to the north ends, then climb out of the water.

Travel north into a chamber, where you’ll find what’s behind the voice that gives this area its name. This accursed being seems to have a different take on the Crones, but it should be taken with a grain of salt, seeing as they were former rivals. More likely, however, is that both sides are wrong, perhaps in different degrees or just in different ways. It will also claim the children from the swamp orphanage are in danger; you can either help this trapped spirit, or you can turn it down. Go along with it for now (you can change your mind later) as there’s a few things you can do while working with the spirit, even if you don’t want to side with it in the end. If you don’t care about finding a sweet Silver Sword upgrade, though, skip to "Fighting the Ghost in the Tree" , otherwise, everybody should continue with "Freeing the Ghost in the Tree" .

Did You Know?: If you read the book "She Who Knows" you’ll find out that the being trapped in the Whispering Hillock is - if mythology is to be trusted - the mother of the Crones, and was murdered by her daughters to ease the suffering caused to Velen because of her worsening madness. This knowledge doesn’t have any meaningful implications, quest-wise, it’s just interesting backstory. 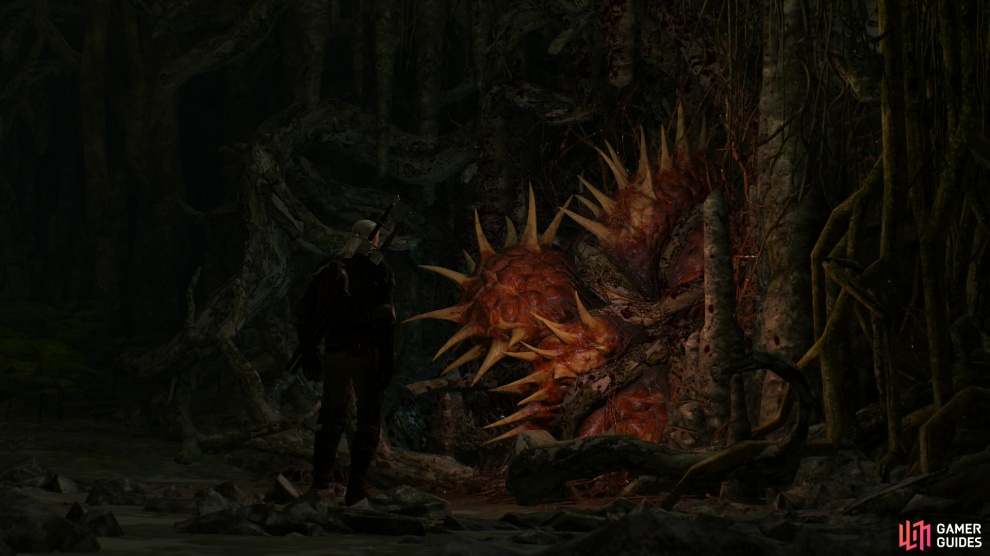 Freeing the Ghost in the Tree

If you decide to help the spirit, it’ll tell you about a ritual you must perform consisting of three components; its remains, a horse, and raven feathers. Ask about each and it’ll tell where to find them, and perhaps why (vaguely) it’s required. It’ll even open a short cut to the north, so you need not bother trekking back through the cave. You should have already obtained a Raven’s Feather back when you were searching for Johnny’s voice, so you can safely ignore that requirement for now and instead focus on the horse and the corpse.

Head north, exiting the cave, and from where you exit head west and slightly north, down some hills, and back into the swamp. When you reach the search area you’ll need to defeat a Water Hag (level eight) then use your Witcher Senses near the southern end of the search area to find a grave marking the resting spot of the spirit’s physical remains. Loot the grave for some "Woman’s Remains" .

Your next objective is a meadow to the south where a black mare dwells. What a pain in the ass… but on the plus side it’ll lead you perilously close to some pretty awesome loot. Head south from the tree, perhaps returning to the "Ancient Oak" signpost and following the trail to the south… the eastern of two trails to the south, not the western one which starts out running south-west, as it takes you perilously close to a Guarded Treasure event where an Earth Elemental (level twenty) dwells. When you reach the edge of huge search area, put all thoughts of finding that horse out of mind for now, and continue following the trail south until it merges with a larger road. Continue south a short distance until yet another road branches off to the south-west and follow it until you discover the "Crossroads" signpost. This southern signpost will allow you to quickly obtain a superior silver sword.

If you wish to obtain it now and not mess up any quests that’s perfectly fine, just follow the road east a short distance until you see - east of the road - a ravine that parallels the road. Head into the gorge and follow it east, down some rocky ledges, then down a grassy slope, at which point you should find the "Entrance" map marker, which marks a cave to the north. Venture inside and proceed to the end of the cave, ignoring all the loot and glowing bodies save a chest, which you’ll find next to a corpse that can be neither looted nor investigated. Inside you’ll find the "Diagram: Griffin Silver Sword - Enhanced" . Hell, this was easier to get than the original diagram! If you couldn’t tell by all the things that pop up on your Witcher senses, there’s a quest here later, but there’s no need to bother with it yet.

Return to the "Crossroads" signpost if necessary, near which you should have no trouble finding black mares trotting about. They seem to like this spot for some reason. Use Axii to tame one (you don’t even have to be all that close) then mount it and ride it back north to the cave, which is north of the ancient oak. Ride the horsie into the cave and, with the three components in hand you’ll be told how to complete the ritual. You can choose to renege on the spirit by purposefully botching the ritual, or you can be less subtle and fight the spirit. In the former case, you can skip to the section "Meeting the Crones" , in the latter case, read "Fighting the Ghost in the Tree" first. If you perform the ritual the spirit - now possessing the body of the mare - will agree to free the children. In this case, skip to "Meeting the Crones" .

Fighting the Ghost in the Tree

If you refuse to help free the spirit, it’ll attack you, predictably enough. This fight is simple; it summons some Endrega Workers (level six) to pester you. Smite them, then attack the roots protecting the physical manifestation of the spirit. Once they’re hacked away you’ll get to deal a few blows to the spirit, after which the roots go back into place, and it summons more Endrega Workers. Repeat until it dies. Once done, loot the tree for some Diamond Dust, then the Endrega for more mundane monster bits. The quest "The Whispering Hillock" ends, but you still need to talk to the Ealdorman of Downwarren to satisfy the Ladies. Fortunately a shortcut has opened up back west, so you need not even get your boots wet.

Leave the cave where you’ll find the Ealdorman and a group of peasants, who have surprisingly decided to brave the forest. Tell them about your deeds and remind him about the payment, which the Ealdorman will go off and… well, he’ll give you his cut.

Geralt will make an offering of the Ealdorman’s reward and the Crones will show up, and, after roughly treating Gran, talk to you. You can talk about the children and the spirit in the tree, but they’re vague about both. Ask about Ciri and eventually you’ll get a cutscene detailing Ciri’s interaction with the Crones…

Note: There is a way to help the Ghost in the Tree gains its freedom AND keep Gran/Anna free of the Crones’ wrath, but it involves completing the quest "The Whispering Hillock" before the quest becomes a goal of the quest "Ladies of the Wood" . Since this doesn’t save the children at the orphanage nor does it make sense, sequentially, it’s not one of the paths presented in this guide.

When you’re in control of Ciri, kill the Drowners (level six) that are initially there, then head east. Along the way you’ll be pestered by some Hounds of the Wild Hunt (level five), which you can either fend off or avoid. Reach the end of the trail and watch a cutscene, which links up with what you saw during the quest "Bloody Baron" .

Back in control of Geralt you can make the choice to either try and pick a fight with the Crones, or threaten to come back for them later with Ciri. Either way, they taunt you and wander off. This ends "Ladies of the Wood" .