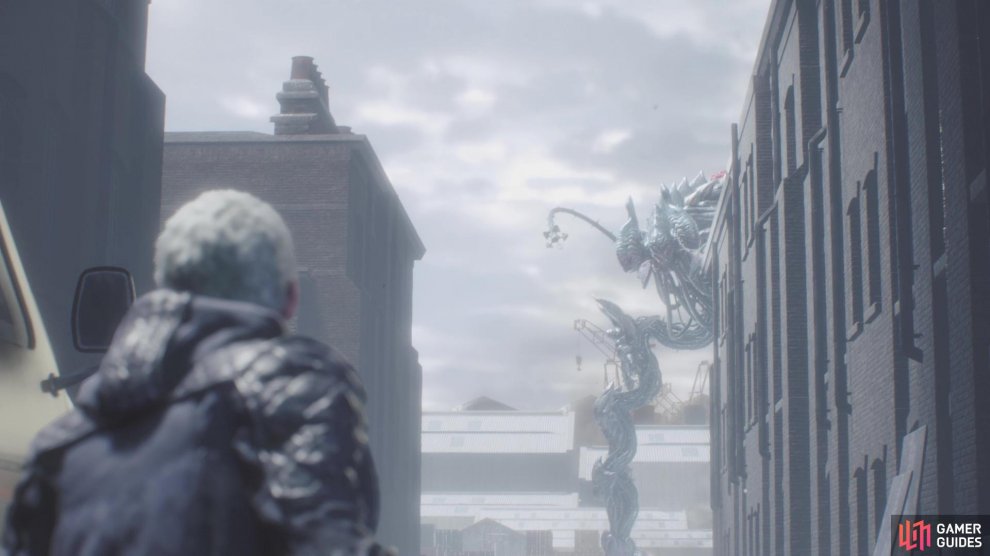 You will be switching back to Nero for this mission, which pits you against that behemoth of a boss you’ve witnessed stomping around in the previous missions. There are no collectibles or anything during this mission, as you will be solely fighting Gilgamesh, the name of the boss in question. When you gain control of Nero, you will want to run straight at Gilgamesh’s legs, as that is what you’ll be smacking around for right now. There are little reddish-colored bulbs on his leg that you must attack and destroy. Luckily, one aerial combo should be more than enough to break them, so you don’t have to do much.

Tip: Although you likely won’t be using Devil Breakers much during this battle, having some Gerberas on hand is always helpful for the extra movement.

However, Gilgamesh won’t take you slicing and dicing its legs so kindly, as it will use one of its "arms" to shoot projectiles at you. That’s about all that Gilgamesh will do during the first part of the battle, so just aim for the red bulbs and destroy them. Once you destroy the first one, though, you want to keep an eye on its "tail," as when it begins to dangle, that is when the boss will drop its body to the ground, which can actually hurt you if you’re standing under it. Once the body drops down, you can jump on top of it and begin slashing away at the boss’ weak point, which was shown in the cutscene at the beginning (it’s a big red bulb).

At some point, Gilgamesh will cover its weak point, forcing you back to the ground and returning you to the legs. If you’ve exhausted all four the bottom bulbs, there are some more above them that you can hit on the legs. At some point during the fight, Gilgamesh will climb on top of the ship near your location, meaning you’ll have to give chase for a little bit. In the middle of where the ship is in half, you will find a contain you can jump on to reach the top of the ship. Note that there are some Green Orbs here, as well as a spare Devil Breaker, should you need one. 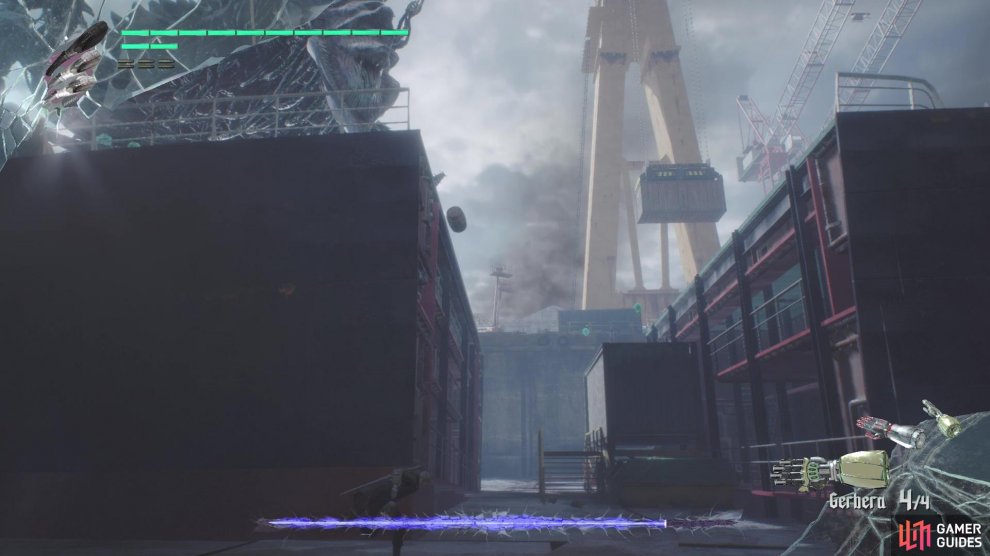 Should you stay on the ship for too long, the boss can fire some pointy projectiles at you that explode after a short while, so be aware of that. If you’re left with the upper bulbs on the legs, you can actually use the grapple to pull yourself to them after locking on. Continue with the usual, attacking the weak point on its back when the body drops, until its one leg falls through the ground. This will trigger a short scene between Nero and V, then you’ll be able to get a lot of free attacks on Gilgamesh at this point.

Eventually, the weak point will recede into its body and Gilgamesh will produce some spikes to push you off of its back (similar to the Hedgehog move that V’s Shadow can get). If you want to avoid this, jump off of its back as soon as you see the weak spot begin going back into its body, as the attack is very quick. This will begin phase two of the fight, where Gilgamesh will add some attacks to its arsenal. It can do the hedgehog attack if you stay on its back too long again, but there is something else it can bring to the table.

As you attack the bulbs on its legs, you will sometimes see an object floating there. When you get close enough, this spinning object will chase after you and if it connects, then it will explode, causing damage. Since it follows you, make sure you always keep moving in different directions to try and avoid it. At this point, that’s about all the boss can do, so keep at the leg bulbs until the main body drops, then go for the weak point until the boss is dead.