Note: Before you reach the title screen, you have the option to choose a difficulty. On your first playthrough, especially for those new to DMC, it's best to choose Human. In fact, the only other difficulty you can choose from the beginning of the game is Devil Hunter, which is a step higher than Human.

Note: Playing the demo and having a save from it on your hard drive will reward you with 30,000 Red Orbs at the beginning of the game. 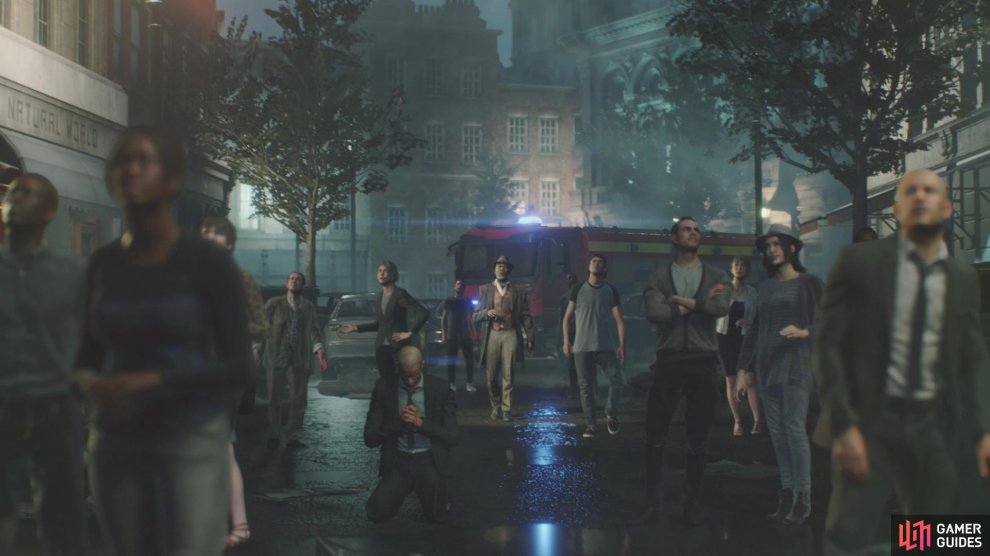 People litter the street, looking up at something, as the camera pans upwards to catch some massive structure in the middle of town. Cutting back to the people looking up again, there is a woman kneeled down, praying. A man in the back is focused on, with the game showing the date of May 16, at 8:06PM, looking on as he smokes a cigar. This man is Morrison, the man who gets Dante his jobs, and he questions whether Dante will make it through this ordeal or not. The view changes to inside of the monstrous structure, where the legendary devil hunter, Dante, is doing battle with someone (or something). You're also introduced to Nero, another devil hunter, and V, a mysterious person, here.

You'll soon gain control after this scene and the only option right now is to move forward. Nero will be the playable character here and while he has his own attacks, the basic movement options will be available to other characters. When you get to the wall, you'll have to jump against it, then press the jump button again to jump off of it. A little further along, you will run into your first enemy, the Empusa. The area will be sealed off and you'll need to defeat all of the enemies to continue.

Combat, at least for Nero, consists of a melee attack (Triangle/Y) and a ranged attack (Square/X). You have unlimited ammo with Blue Rose, Nero's firearm, so you can continually shoot it without worry, although you will need to reload now and then. You can also hold down the button to charge up some shots, which deal more damage than normal shots. Nero's other weapon, Red Queen (his sword), is pretty normal as far as swords are concerned. However, there is one unique mechanic to Red Queen, which is known as Exceed.

Basically, with the press of the L2/LT button, you can rev up the sword, represented in the top left corner of the screen. This adds some extra oomph to his melee attacks, meaning he will deal more damage. There's more to this, too, but that will be covered a little later. In fact, you don't really need to worry about Exceed right now, as all of the enemies in the Prologue are pretty basic and will perish with a few hits on Human difficulty.

Back to the action, use the basic attacks to finish off the Empusa before you, then more will spawn. You'll be taught about the lock-on button (R1/RB) here, which is important when keeping track of foes in combat. While holding down the lock-on button, you can press the left analog stick in to switch targets. Use your basic skills to finish off the rest of the enemies, which will cause the barrier blocking your progress to finally drop. 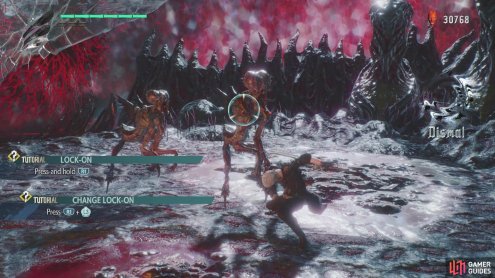 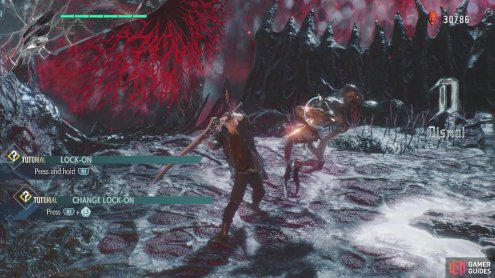 Continue onward until you encounter another scene, where you'll be introduced to a new enemy, the Green Empusa. They will not attack you, but their green bulbous sac can excrete a liquid that will heal other demons, so you will want to take care of them before anything else. At this point, you will learn about an actual move in Nero's combat repertoire, called High Roller. This special move (hold R1/RB, then press back on the left stick in conjunction with Triangle/Y) will launch an enemy into the air. This won't work on all enemies, but those that can be launched are typically defenseless while in the air, enabling you to perform combos.

To add on to High Roller, you can also follow enemies that you knock up into the air by holding Triangle/Y. You'll also learn about Color Up, which is charging up the shots of Blue Rose, your gun. It doesn't really matter right now, so just kill the demons in any order you want, but remember that Green Empusas can be annoying later on in the game. Defeat any other demons that appear, then watch the scene that follows. Continue forward, fighting more Empusa, and when you get to the top, you'll witness Dante getting his butt kicked by some large demon. Drop down, approach the door and get ready for a turn yourself.

First and foremost, on your first encounter with this boss, you are supposed to lose. Your combat options are extremely limited and should you even try to fight back, you're highly likely going to die. However, there is a trophy/achievement attached to defeating Urizen in the Prologue, called Well I'll Be Damned. It's best to wait until you complete the game at least once, as you'll have access to your Breakers and will have some skills under your belt. Even on Human, Urizen can be an annoying boss, as he will toss out a myriad of ranged attacks and you will have to destroy his "shield" before you can actually damage him directly.

Let's go over Urizen's moves before anything else, as while they aren't too difficult to dodge, they can be annoying. One that you will see quite often is a bunch of lasers he shoots upwards, that come falling down where you stand (or used to be standing). As long as you keep moving, you can easily dodge this. He can also wave his hand to cause eruptions/explosions under your feet, but moving forward or backward will put you out of danger. One of the quicker attacks is Urizen shooting giant fireballs at you, which explode as they hit the ground, so always be ready to dodge to the sides. 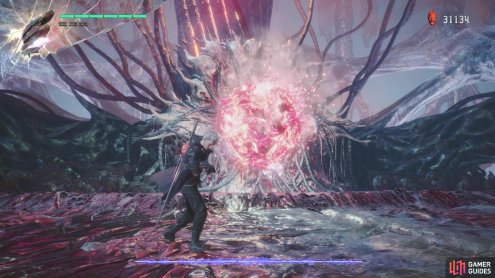 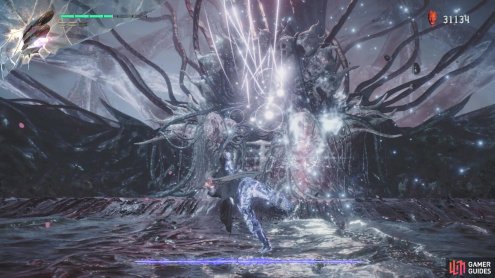 There is a similar attack to this, where he shoots out a blue orb that creates a sphere. Being inside of this will slow your actions to a crawl, leaving you open to any follow-up attacks from the boss. One of the last attacks you will see is a big laser that sweeps across the arena. As it reaches the other side, another laser will appear in its original spot and they will sweep across together, crossing over each other; you simply need to jump over them to avoid damage. Note that the crystal shield thing can actually lash out if you're in melee range, causing damage. Additionally, Urizen himself can send out a shockwave if you stay too close too long, but this doesn't do any damage at all.

That's pretty much all of Urizen's attacks, so let's talk about how to take him down. As already mentioned, you can't deal direct damage to him until you destroy that crystal shielding him. The best way to deal with it is by shooting it from afar with charged up shots from Blue Rose. With the Devil Breaker, Gerbera, you can actually reflect the fireballs back at Urizen, which helps in breaking down that shield. Once the shield shatters, Urizen will be vulnerable and will stop attacking completely. Run up to his body on the chair and begin breaking out all stops, attacking relentlessly until he eventually restores his crystal shield. He'll return to attacking you while you break the shield again.

Should you manage to defeat Urizen in the Prologue, then you will get the trophy/achievement mentioned before, but you will also receive a secret ending. This can actually be used to unlock high difficulties, if you wish.