It’s time to break into the north, but the gate leading there is blast resistance, so normal tactics won’t work. Thus, Amita has the idea to use a chemical truck to blast open the door. This is where the mission slightly differs, as if Amita is leading the Golden Path, then you’ll have to ambush the convoy with the chemical truck, although it will stop shortly at a place not too far from where you ambush it.

With Sabal leading the Golden Path, you will not have to go and ambush the chemical truck, as there will be one already at the station where it stops if you sided with Amita previously. Either way, kill all of the enemies at the station, then steal the truck and start driving to King’s Bridge. Note that there’s a few enemies along the way, so keep a lookout for them as you want to keep the damage to the truck minimal.

If Amita is the leader of the Golden Path, youll have to chase the chemical truck a bit before it will stop.

When you finally get to the bridge, it might be best to get out before crossing it and clearing the area at the far end of the few enemies first, which includes a sniper in the one tower. Once you’re done, get into the truck and go full speed towards the gate, jumping out of it when prompted and sending the truck to blast open the gate itself.

The gate will now be open and there will be a bunch of enemies on the other side. Clear the compound of the enemies, then go to the radio to send a broadcast to the people. Of course, things aren’t quite finished yet, as Pagan’s Royal Guard is on its way to try and retake the bridge. These enemies are tougher versions of the normal enemies you’ve encountered thus far, so they may take a few more bullets to put down.

The best place to be while they’re coming is likely the building where the radio is located. Note that there will be one Heavy Flamer among the group of enemies, and it’s possible that he might come inside the building, so be prepared. If you feel that you are getting swarmed inside of the small building, exit it and use one of the other buildings as cover. Once all enemies are dead, meet up with the rebels to finish the mission. 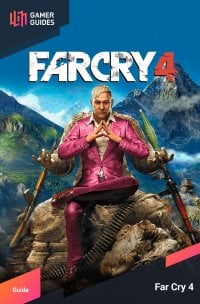 You are Ajay Ghale, someone who was born in Kyrat and moved to America with his mother to escape from strife and civil war. However, your mom has died and her final wish is for you to return to your birthplace and scatter her ashes at Lakshmana. The only problem is that you get thrown into the civil war that is still brewing, having to side with The Golden Path to try and overthrow the tyrannical Pagan Min.