We finally return to the present day and find out what happened with Nate and Sully. After the scene, follow the guys down the alley and then turn left through a small gap. Cutter is a bit claustrophobic, which adds a few laughs, and then hop over the railing and turn right for the Diamond Studded Horse Brooch .

Get the treasure from the alley (left) and then use the power box to proceed (right).

Climb the fence to a dead end and then grab the power box on the left and the pipe above to shimmy over the gate. Cutter will create a path for himself and Sully, which he could have done a few seconds earlier and saved us some time, and then jump the gate on the other side. To exit you’ll need to walk up to the yellow trailer and hold O to push it forward against the fence and then hop over for a scene.

After the scene you can head toward the green garage door, but in Uncharted style it’s not gonna be as easy to get inside as opening the door. Head to the yellow pipe next to the door and begin to climb up. Before reaching the top the pipe will break, forcing you to quickly press X to avoid death. Shimmy left and hop across the plank and then up to the gutter. Follow the gutter around and drop to the roof, crossing to the other side for more pipes. Use these to swing to the lamp, which will fall and require you to press X, and then hop over to continue around the outside of the building and into a window.

Jump to the pipes and drop down to the window and then shimmy along the pipe to the right for the Coral Cameo Brooch .

Get the treasures on the wooden platform below where you enter (left) and on top of the pile of boxes on the ground floor (right).

Backtrack to the archways and hop over to the other side and shimmy left to more pipe. Use the pipe to reach another windowsill below that you can drop down to and then finally to the garage floor. Before letting the guys in you should head back to the other side of the garage and climb the pile of boxes for the Victorian Locket and Chain .

Open the green door for your mates outside and then follow the car tracks. There are four pressure sensitive stones on the floor that Drake will point out and then time your jump with the others and then press UP on the directional pad. You’ll need to align the flashlight with both indicators, making sure light is shining on both, to unlock the hidden path.

Follow the underground tunnel to the end of the path and then shoot the lock off the door near the gateway to continue. Enjoy the Cutter’s comments as you squeeze through the pipes and exit the other side. As you head for the door you will encounter some of Marlowe’s men, so take them out with your gun or melee attacks and then search the area for the Silver Roses Bracelet .

Take care of Marlowes men (left) and then grab the treasure on the floor (right).

Make sure to get both treasure in the large shaft, including the Strange Relic.

Continue to the next room with more of Marlowe’s men and then climb the pipes on the wall to the ladder. Nate will automatically kick the ladder down and you can climb up to the next room. Before doing anything else you should use the yellow desk to climb up the wall and shimmy left for the Pearl, Diamond and Ruby Brooch .

Climb the walls to reach the treasure (left) and then head right to a set of levers (right).

Once you get the treasure you can head right around the vents and then pull the lever alongside Sully to drop the gate. Climb up and follow the path, turning left and dropping through some caved in parts of the tunnel. 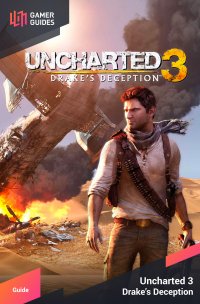