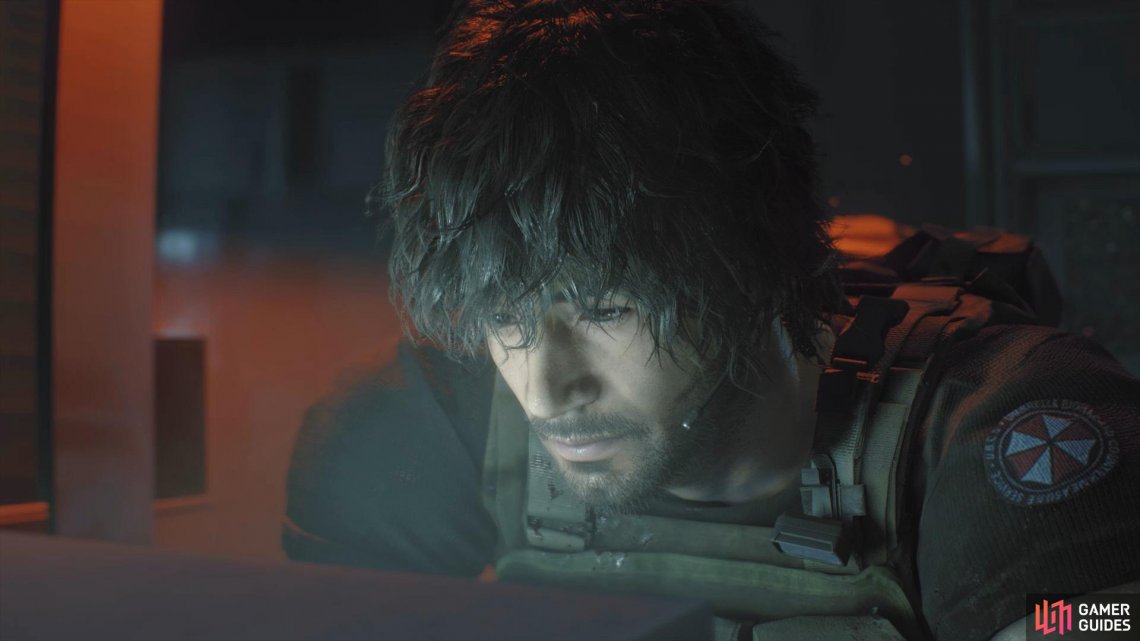 Once you’ve managed to fight your way through the Police Station with Carlos and defeated Nemesis Stage 2 as Jill, you’ll find yourself in the Hospital playing as Carlos once more to find a cure that will hopefully save Jill. Take the Assault Rifle Ammo off the side, then head out into the lobby to collect some more Assault Rifle Ammo along with a First Aid Spray from the desk, now proceed through the corridor to find yourself in the Reception.

Note: You wont be able to obtain most of the items within the Hospital until you have the Lock Pick and Bolt Cutters back in your possesion later on. 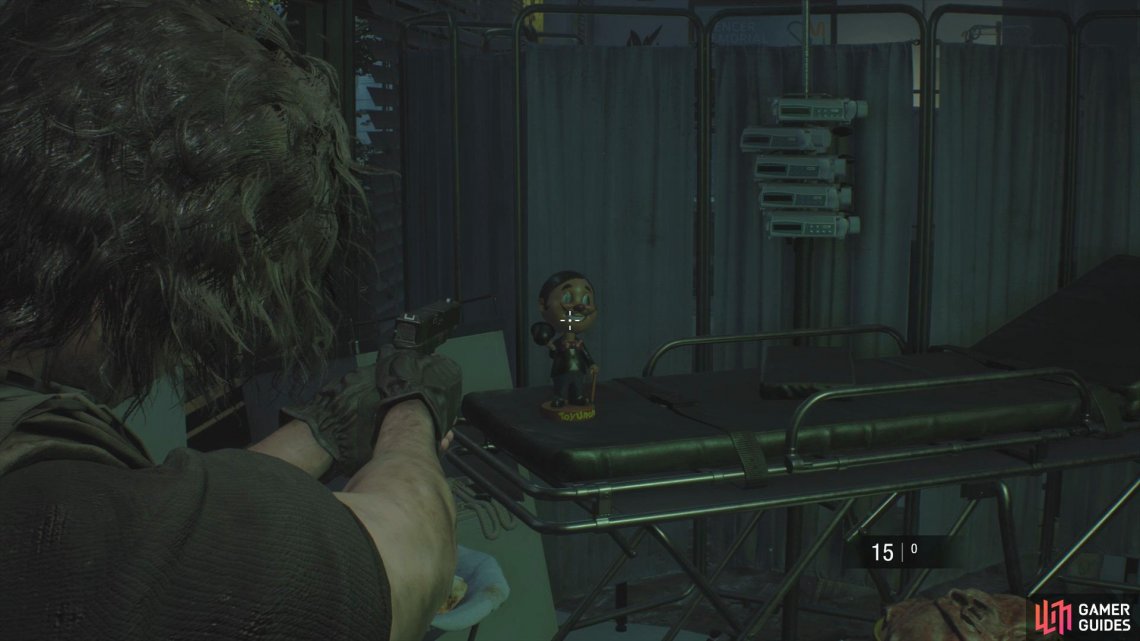 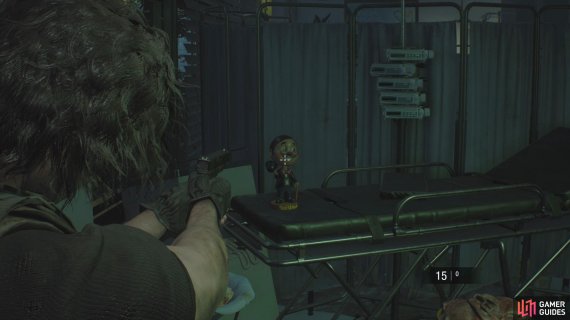 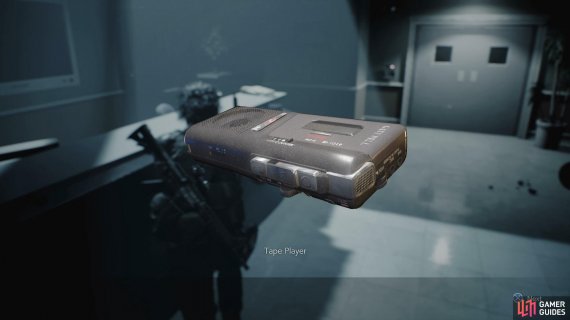 Follow the Corridor around to find the first Charlie Doll (left), then go into the Lab Reception to find the Tape Player on the desk. (right)

Exit the room and follow the right path along until you reach the next door. But before heading through, look to your left to find a Charlie Doll sitting on the bed, now go inside the Lab Reception to find a Tape Player along with the Nurse’s Journal: Sept 25 File sitting on the desk, then collect the Green Herb that’s sitting next to the chair in the corridor. Enter the Emergency Entrance Room to find some Handgun Ammo on the desk and in the crate, then head through door on the left and follow it up to the Roof.

Once you’ve made it onto the roof, look to your right to find another Charlie Doll sitting in the corner, then go through the door on the otherside. Here you’ll want to go right first to find some Handgun Ammo on the bed, then take the left path to find the Hospital Map pinned up on the board. 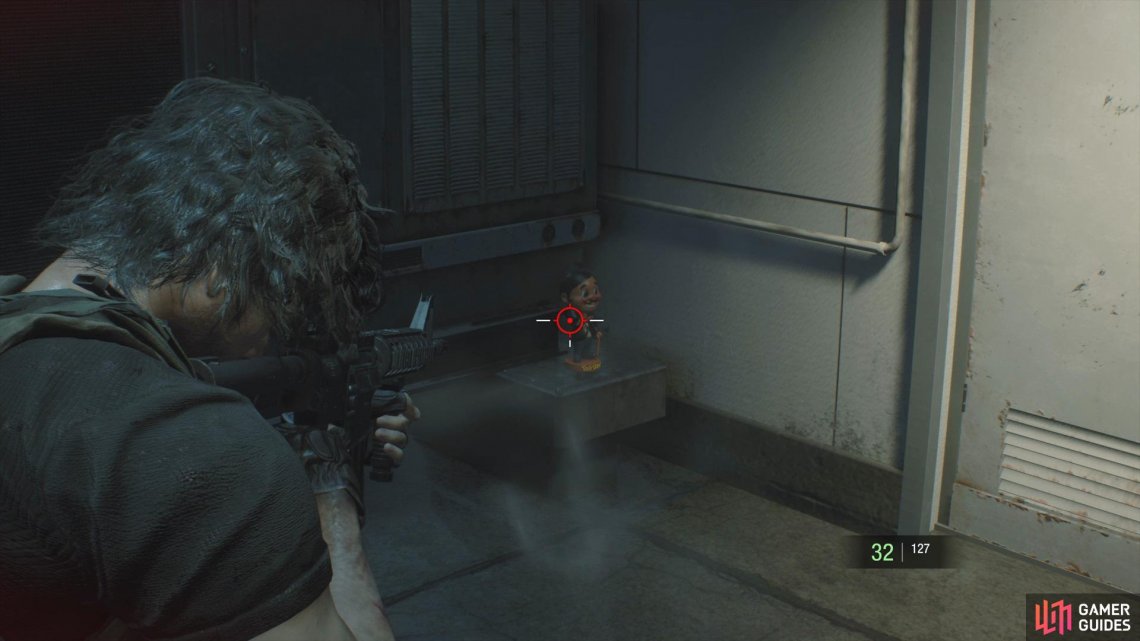 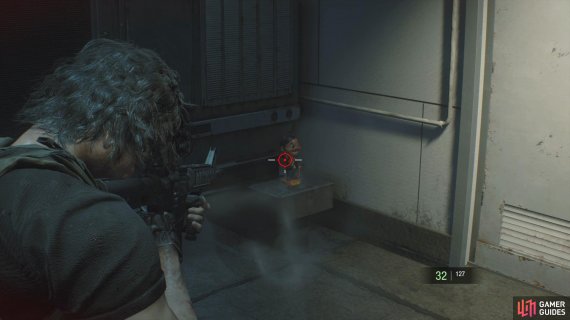 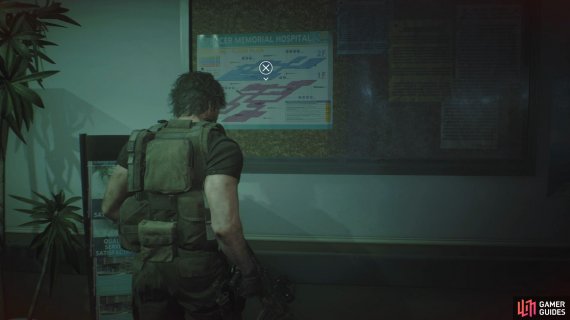 Head onto the Roof and look over to the right corner to find a Charlie Doll hiding (left), then go back into the building through the other door to pick up the map off the board on the left. (right)

Note: Before proceeding any further into the Hospital, head into the Records Room to save your game and to find the following items, Green Herb, Assault Rifle Ammo and some Handgun Ammo.

Exit the room and quickly pop into the Staff Room to find the Nurse’s Journal: Sept. 29 File on the desk in the center, then grab the Memos from Administration File off the wall before picking some Assault Rifle Ammo off the desk in the corner, now go back out into the corridor and head towards the Nurses’ Station.

Note: You’ll notice three windows that have been smashed throughout the Hospital, use these to drop into the Courtyard to find the Tactical Grip Assault Rifle Attachment, then jump across the bush to find a Green Herb along with the Locker Room Key. 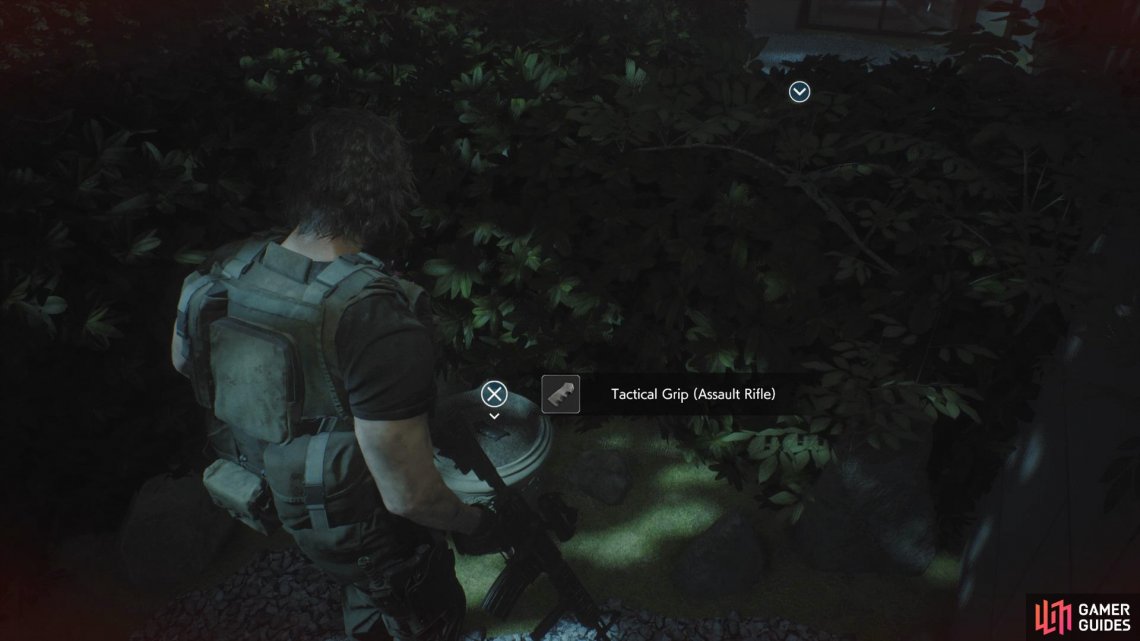 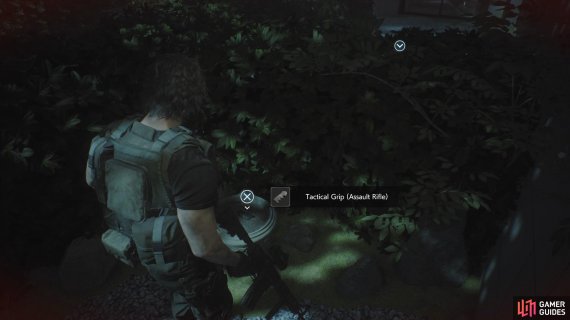 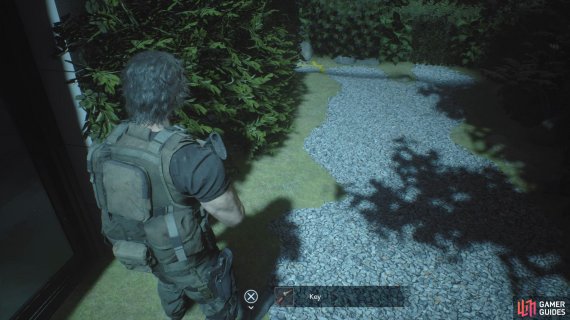 Drop out of the window on the 2nd floor to find the Tactical Grip Attachment for Assault Rifle (left), along with a Key in the Courtyard. (right)

Head back inside to pick up some Assault Rifle Ammo, then unlock the door and return to the Staff Room. Here you’ll want to unlock the door with the recently acquired Key to access the Locker Room, which contains the Hospital ID Card along with a Flash Grenade inside. Make your way back towards the exit and you’ll encounter your very first Hunter Beta, in order to take these out you’ll want to focus firing at their head whilst moving backwards to avoid their attacks.

With the Hunter Beta dealt with, head back out into the corridor and enter the Nurses’ Station, here you can find a Note about Tape Recording File on the desk, then enter the Sick Room to find some Assault Rifle Ammo and a Green Herb, now shoot the Charlie Doll that is hiding in the bin before using the ID Card on the door in the other room. Follow the path along until you reach the Linen Room, then collect some Assault Rifle Ammo off the table to the left side of the room. Finally, collect the Red Herb in the center of the room, then go into the Treatment Room to obtain the Audiocassette Tape. 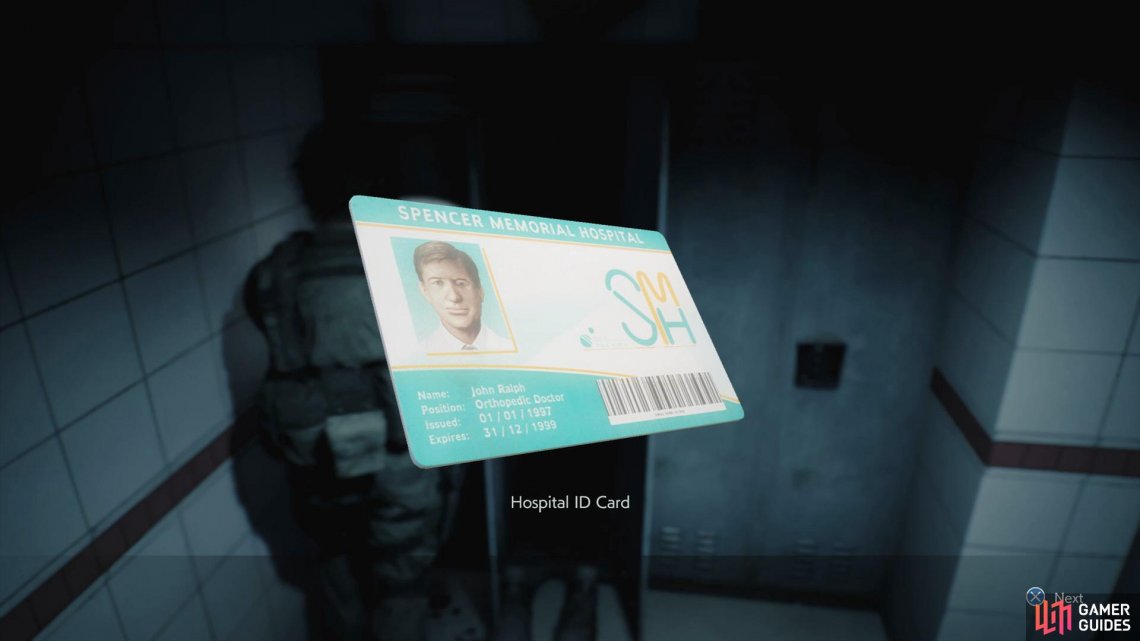 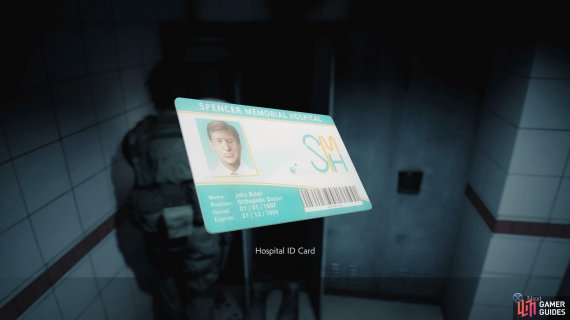 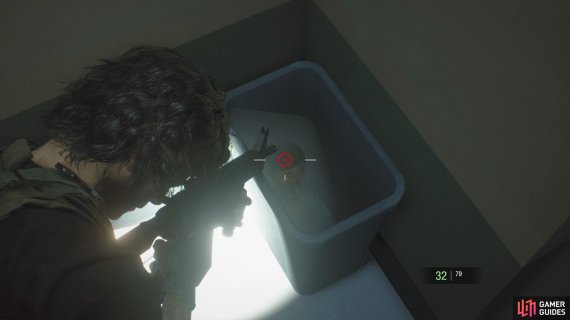 Head into the Staff Room and use the recently acquired Key to open a Locker for an ID Card (left), now go into the side room of the Nurses’ Station to find a Charlie Doll sitting in a bin. (right)

Tip: Once you enter the Treatment Room you’ll face two Hunter Beta’s, so you’ll want to quickly throw a Flash Grenade at them and head to back left corner of the room to pick up the Audiocassette Tape.

Once you’ve retrieved the tape, take the exit out on the right and then take a left to find some Assault Rifle Ammo, now head back down to the Emergency Entrance on the first floor and take out the Zombies that have broken through the window. Use ID Card to gain access to the Operating Room, inside you’ll find a Flash and Hand Grenade a bunch of Handgun and Assault Rifle Ammo. Pick up the RE: Lost Items File, then combine the Audiocassette Tape with the Tape Player in your inventory, now go back into the Lab Reception to open up the voice-authenication door.

Note: With the RE: Lost Items File in your possession, you’ll be able to open the Nurses’ Station Safe with the combination given, 9 Clockwise, 3 Counterclockwise. Opening this will give you the Dual Magazine Attachment for the Assault Rifle.

Give the vaccine to Jill¶

Head through and do a loop around the room to find some Handgun and Assault Rifle Ammo, then collect the Banquet Invition File next to Bard, now interact with the computer to view a cutscene. Finally, head into the room on the right to pickup a Vaccine Sample, then return to the Makeshift Sickroom to give it to Jill. 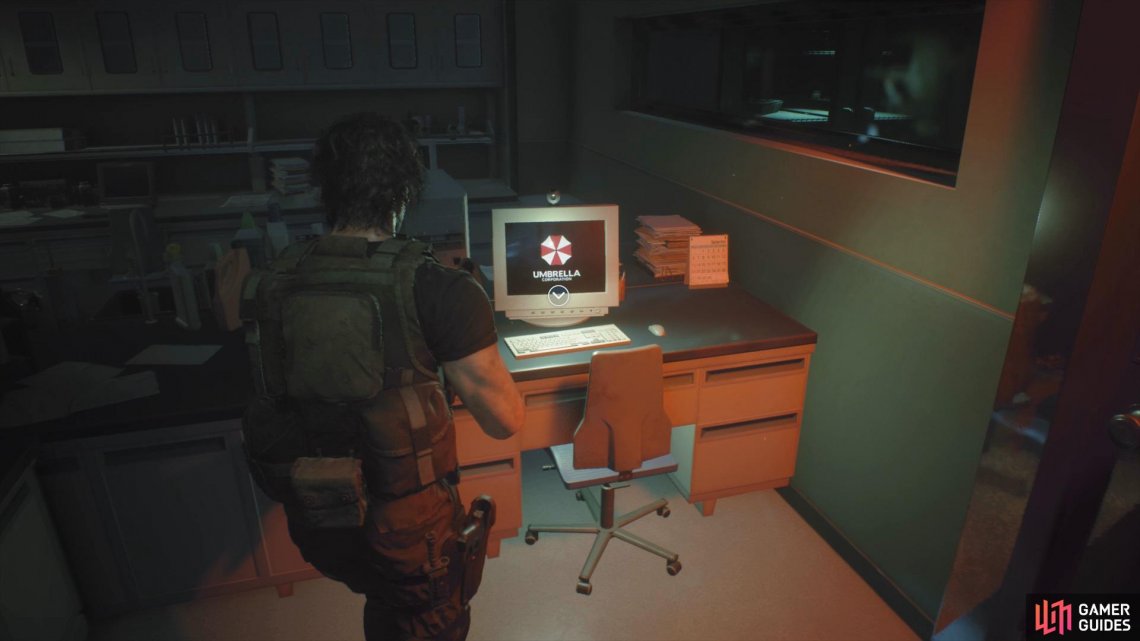 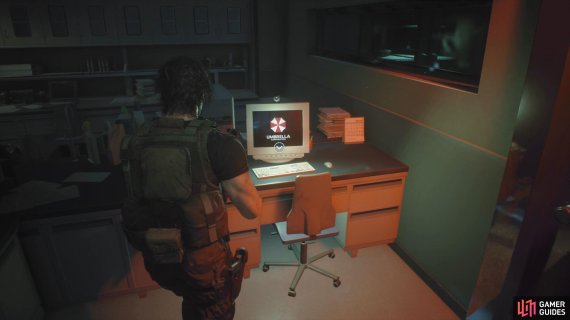 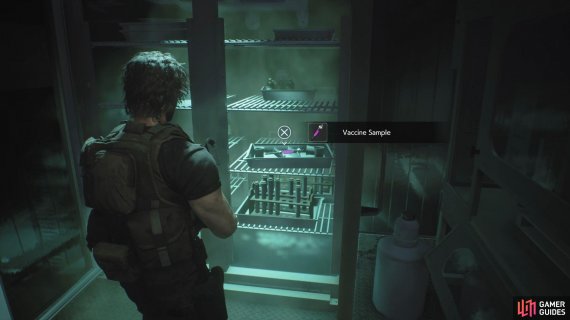 Head into the room with voice-authenication door and interact with the computer (left), now go into the side room to collect a Vaccine Sample for Jill. (right)

Tip: Make use of the Portal Generators that scattered around the Lobby to help stun the Zombies for a short while.

Tip: Save two Hand Grenades for the Hunter Beta’s that will spawn later on, as this will one shot them.

After the cutscene has come to a close, you’ll want to grab the First Aid Spray off the side, then head out into the Lobby to defend Jill whilst she recovers. Quickly do a loop around the area to pickup some Ammo and Healing items to help you fight through the waves of Zombies to come. Once the lights shut off a Hunter Beta will pounce out of the back room, quickly throw down a grenade to kill it, then go into the room and interact with the switch. 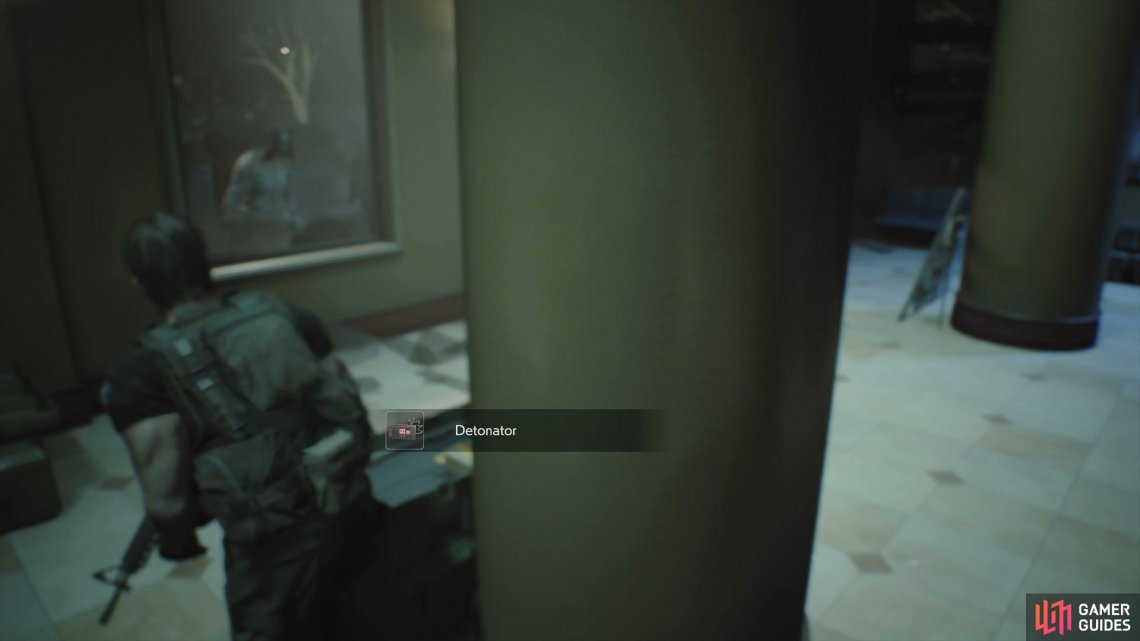 Before Leaving, pick up the Hip Pouch along with the Ammo and Healing Items, then place the detonator on the center pillar and hold off for the remaining 20 seconds.

I Need a Hero

Head to the Underground Facility¶ 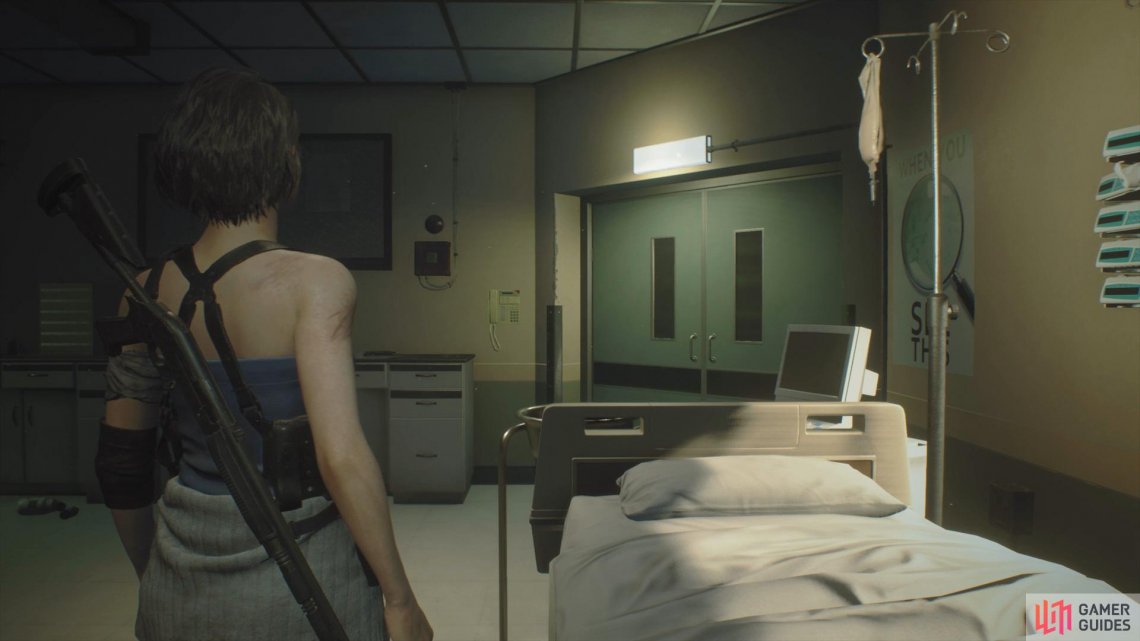 After the Zombies have been dealt with, you’ll be back in control of Jill, pick up the G18 Handgun (Burst Model) along with some Handgun Ammo off the side, then go out into the Lobby. Open up the two crates on the way to the Courtyard to find a Red Herb and some Handgun Ammo, then take a left at the corridor to open up the case that contains some MAG Ammo, now go into the Emergency Entrance Room and open up the locker for some Explosive Rounds.

Tip: Now that you’ve got your Grenade Launcher back you’ll want to use the Explosive Rounds to easily take out the Hunter Beta’s. 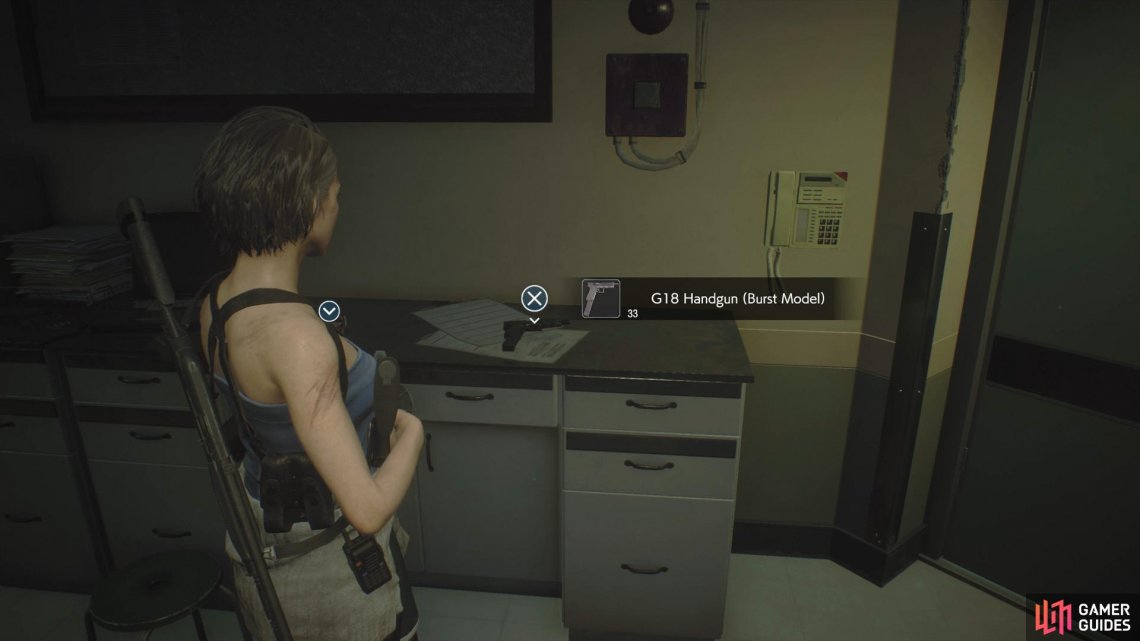 Head up to the 2F and open up the Locker in the Staff Room for some Shotgun Shells, now go to the Linen Room to open up the locker for some more MAG Ammo. Finally, crawl under the pile of chairs to the left of the Nurses’ Station door and then jump out of the window to find a case the contains the .44 AE Lightning Hawk, now return to the Reception once more and take the east exit down to the Underground Facility.

Collect all weapons in the campaign.