Cascade Kingdom is the first kingdom you get to fully explore and it will have a total of 50 Purple Coins, which are in the shape of stone wheels. Upon your first visit to Cascade, you won’t be able to get all 50, as the game hides some of them until you leave and return.

On the very first visit, immediately upon landing and gaining control, turn around and look along the cliff’s edge to find three coins behind a rock formation.

From the tree stump with the yellow coins near the beginning, look to the left to find a lower path with the three coins. 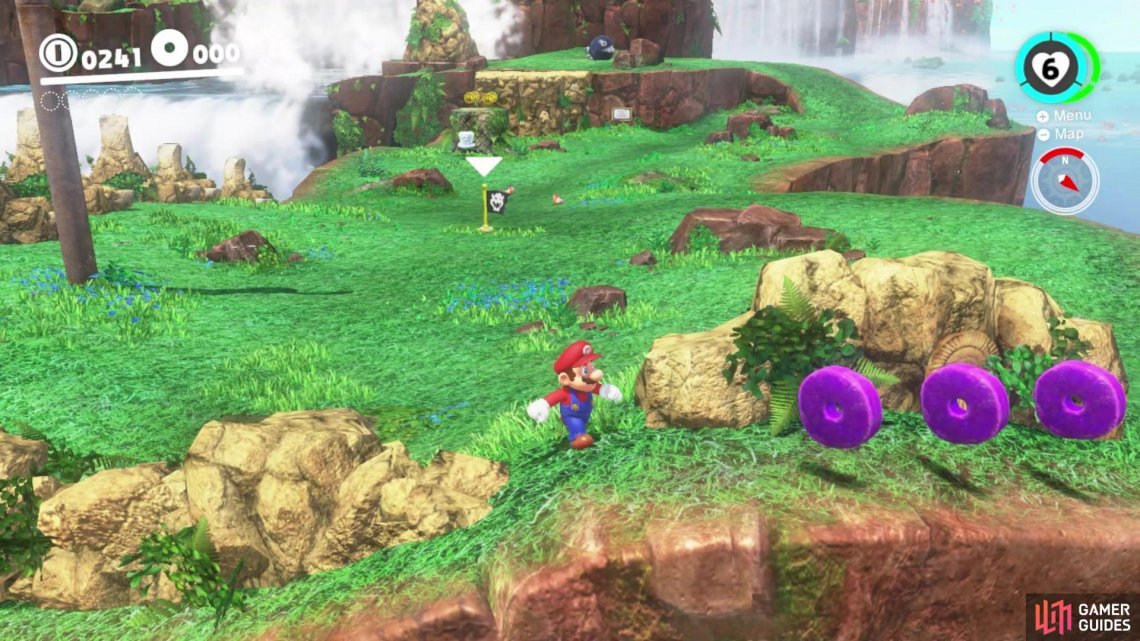 In the area with the Chain Chomp for Our First Power Moon, there is a lower ledge off to the right with the three coins.

Located in a cave behind the waterfall, which also has a painting.

Located in a little alcove underwater, which is found underneath the makeshift that forms after collecting Our First Power Moon.

The following coins are accessible from Multi Moon Atop the Falls and onwards.

After crossing the makeshift bridge from Our First Power Moon, continue along the level until you come to a large pole. Behind this pole, along the edge, will be the three coins. 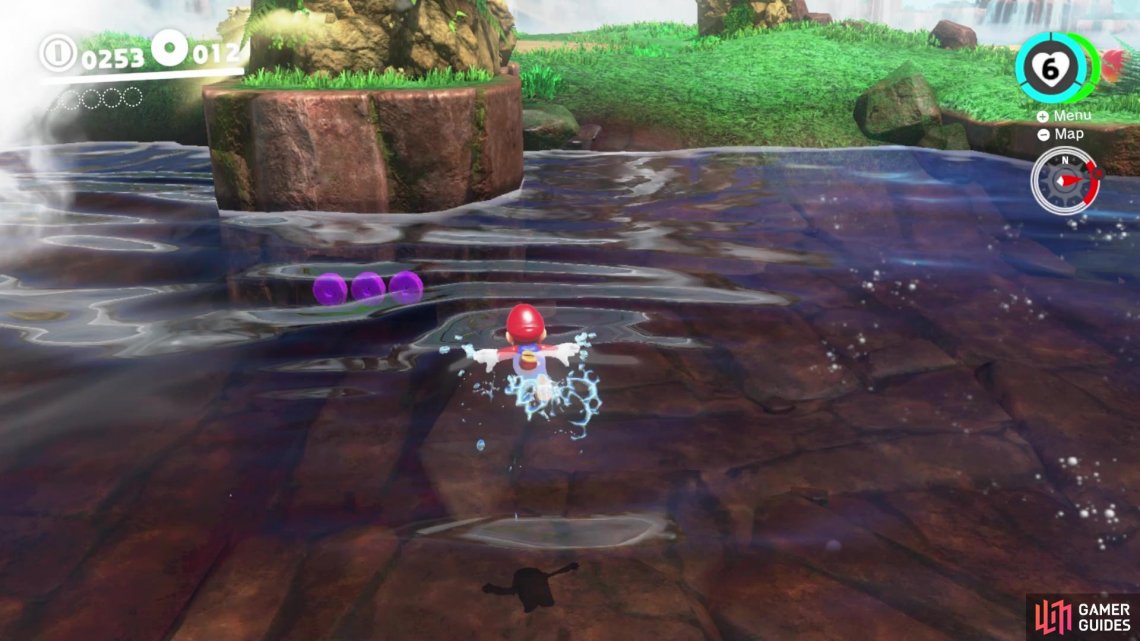 You’ll find these coins on top of some fossils a little bit ahead of the previous coins, and right before the three Chain Chomps.

These are found at the base of the raised section, where the sleeping T-Rex is located, near the three Chain Chomps. The three coins are in a little alcove.

Found to the right when facing the three Chain Chomps. They will be over a gap that can be filled in with the hat-platforms.

At the Stone Bridge checkpoint flag, there are some raised platforms off to the right, which lead to some of those hats that become platforms when you hit them. This will lead to a ledge with the three coins. 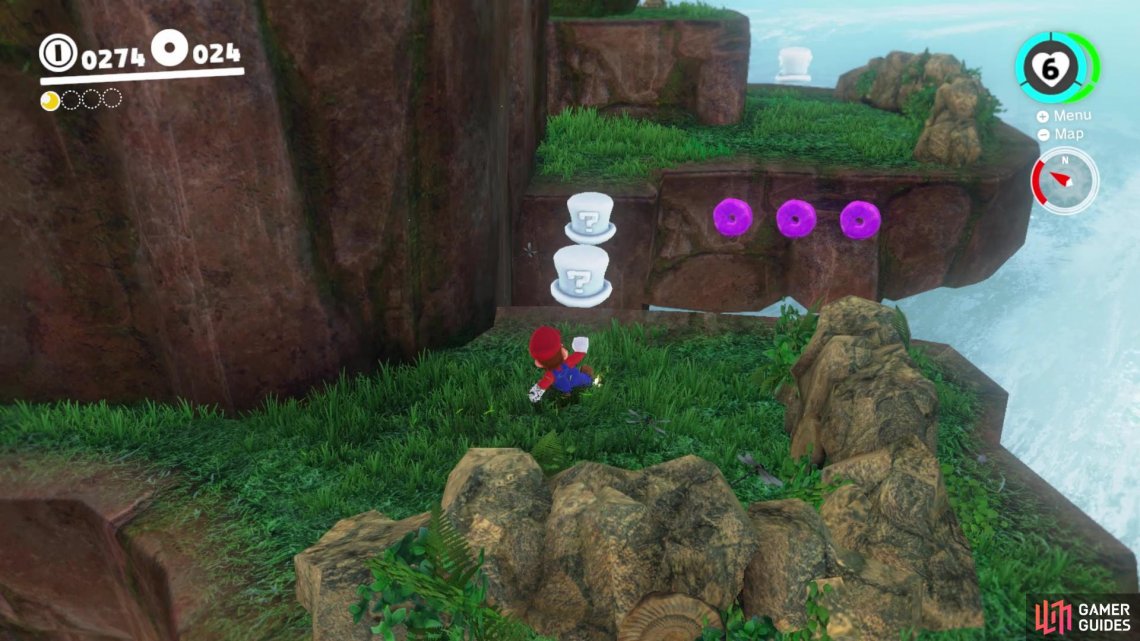 At the Stone Bridge checkpoint flag, cross the bridge and you should see some large fossil structures straight ahead. The three coins are on top of the one structure.

Head to the area in front of the 2D sections that’ll bring you to the top of the kingdom. When facing the wall, look along the edge to the left to find the three coins.

The following purple coins will be available after completing Multi Moon Atop the Falls.

When you cross the makeshift bridge that appears after collecting Our First Power Moon, there will now be a Chain Chomp on the main path. Use it to break the tall fossil block, revealing a pipe. This pipe takes you to the top of the landmass behind it, where the Top of the Big Stump checkpoint is located. The four coins are found on a ledge in that area.

When facing the four Chain Chomps by the T-Rex, there is a path along the left side that leads to a pipe. Just past that pipe will be three coins sitting above a gap. You can either collect them with Cappy or use the hat platforms. 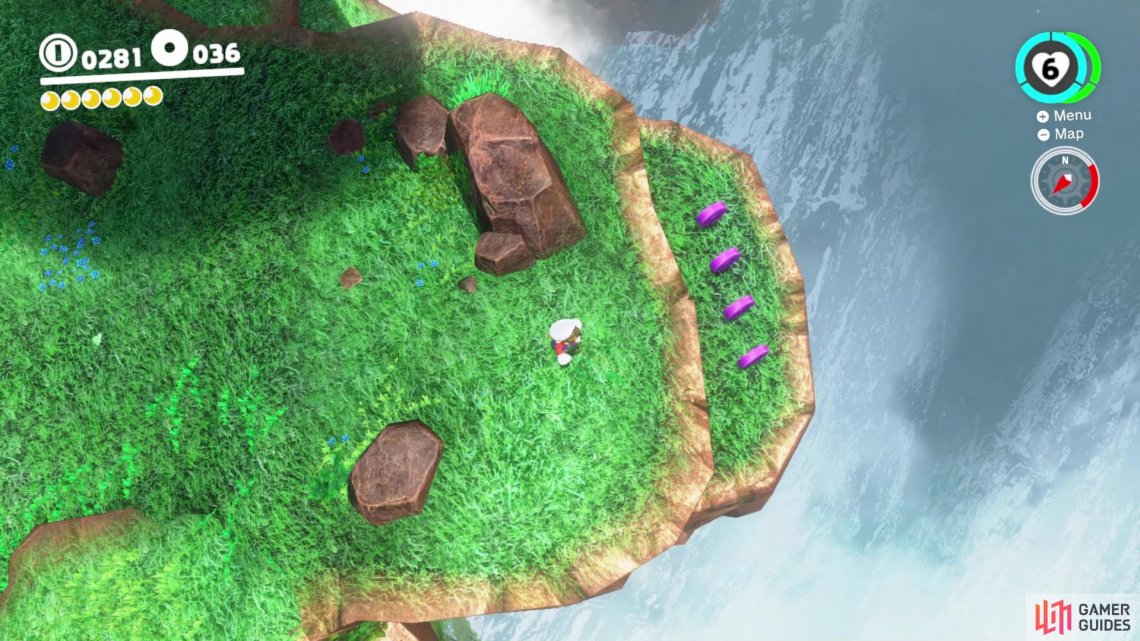 You will find these in the Koopa’s 2D Adventure sub-area, which is through a door just below coins 28-30. Once in this sub-area, you will have to reach the second set of vertically moving platforms. Ride the first one up as far as possible (offscreen, too), then quickly move right until you can get on top of the ledge above the pipe. This will lead you to a hidden area with the four coins.

The final three coins are found at the top of the course, which is accessible from the short 2D section in the main area. There are some floating islands at the top, off to the one side, where you will find the three coins on one of them.

Bowser has once again kidnapped Princess Peach and locks down in his eternal struggle with Mario, the former plumber now hero/adventurer. Bowser's plan this time is to force Peach to marry him, which means even more is at stake. The battle between the pair ends poorly in Mario's favor, as he is blasted off of Bowser's ship, his hat shredded. Mario lands in a mysterious world, where he befriends Cappy, whose town was ravaged by Bowser and sister kidnapped. Together, they chase Bowser down to stop his evil doings and rescue both Peach and Tiara.