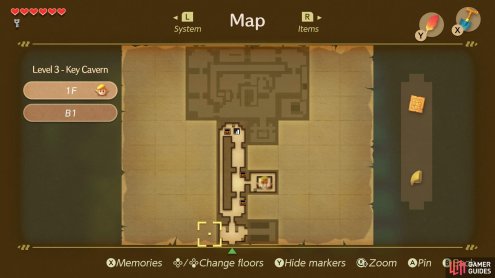 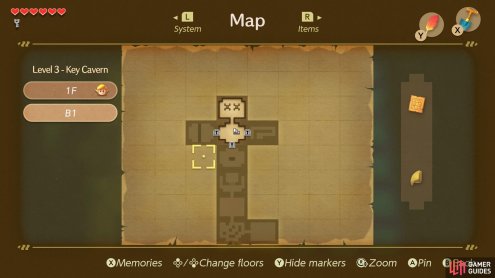 Locating the Stone Beak & Map to the Key Cavern

Once you've entered the Cavern you'll want to pick up a nearby vase and launch it at the door in order to open your path through, head into the next room ahead and kill all the enemies in the area to get a Chest to spawn with the first Small Key. 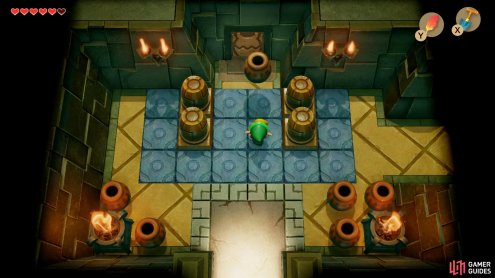 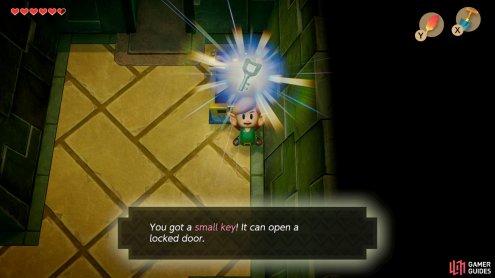 Use a Small Key to open the door to the north and kill the enemies inside to get a Small Key to fall, collect it and hit the Crystal to make it glow orange.

Head back up the stairs and collect the Stone Beak from the the now accesible Chest, now proceed back down the corridor until you see an opening to the right.

Take out the enemies in the area and collect the Map from the Chest, now travel back to the lower section of Cavern and use another Small Key to open the bottom door.

Note: You're about to encounter a Pairodd which are enemies that will teleport when you get close to them, the easiest way to kill them is by holding down your charge attack and let go as you approch them.

Your're now about to take on some more Pairodd's, once they've been defeated collect a Small Key that has dropped and head through the door ahead, kill all of the nearby enemies and go through another door ahead. 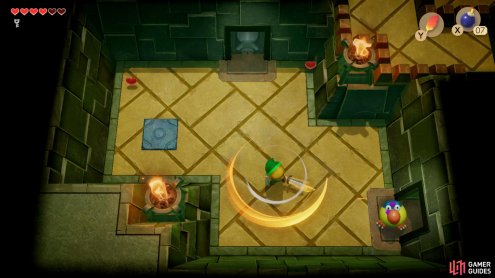 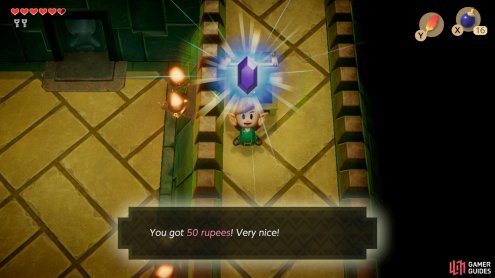 Tip: You'll need to feed the Dodongo Snakes some bombs in order to kill them.

Inside you'll want to jump up and collect yourself some Bombs and then interact with the Owl to gain a clue, now take the stairs and follow the corridor down to the stairs, but make sure to collect 50 Rupees from the Chest first.

After you've made it down the stairs, head through the door above to face some Dodongo Snakes, once they've been taken care of, proceed through the door to the right and position the stones to allow you to reach the Chest to collect the Pegasus Boots.

Note: Pegasus Boots allow you to do a dash move by pressing the L button.

Take the Portal back to the Dodongo Snakes room and exit out of the bottom door, head right and place a bomb on the bottom grey floor piece to open up the wall, inside the hidden room place another bomb against the crumbing part of the wall to allow you to get through to the other room.

Use your new boots and dash towards the large pit and jump across as you approach it, now head up the stairs and open the Chest to gain the Nightmare Key.

Head back into to the room with the grey floor and head through the door ahead, take out the Bomb enemies and proceed into the room to the left to open a chest that holds the Compass inside.

Place another bomb against the crumbling wall to the left, head through the now open path and kill the enemies inside to find a Small Key.

Head back to the room with Owl Statue and go through the southeast door and follow the corridor, now use your small keys to remove all the stones leading to the stairs and proceed down to face the Nightmare.

To begin the fight dash into the wall to cause the Slime to come down, keep hitting one of the eyes until they stretch apart and then dash through the middle to split them apart.

Keep focusing all your attacks on one of the eyes until it's killed, but beware they will jump up into the air and try to land on your head, so you'll need to pay close attention to the shadows on the floor in order to dodge them in time.

Once the two Slime Eyes have been defeated, collect the Heart Container and then head through the door ahead to collect the Sea Lily's Bell. 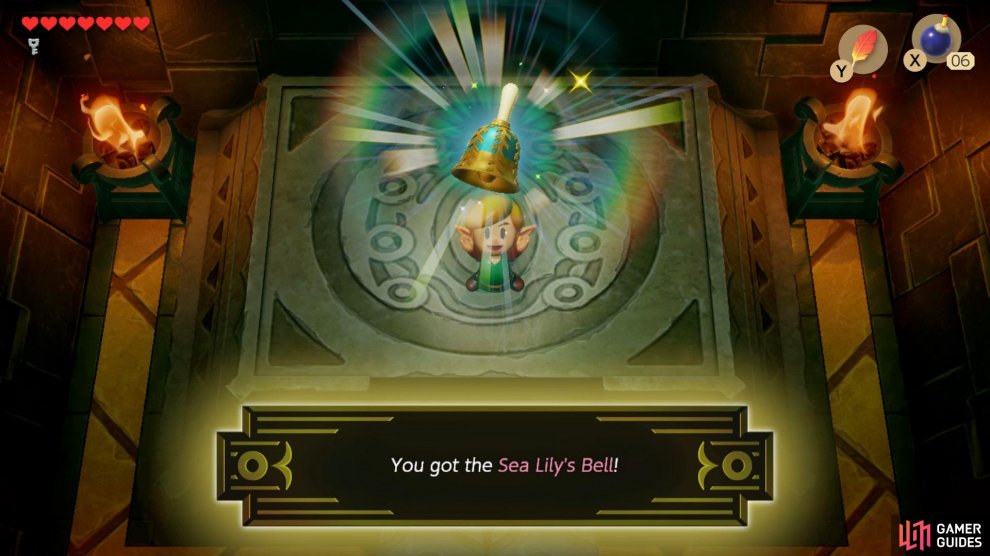