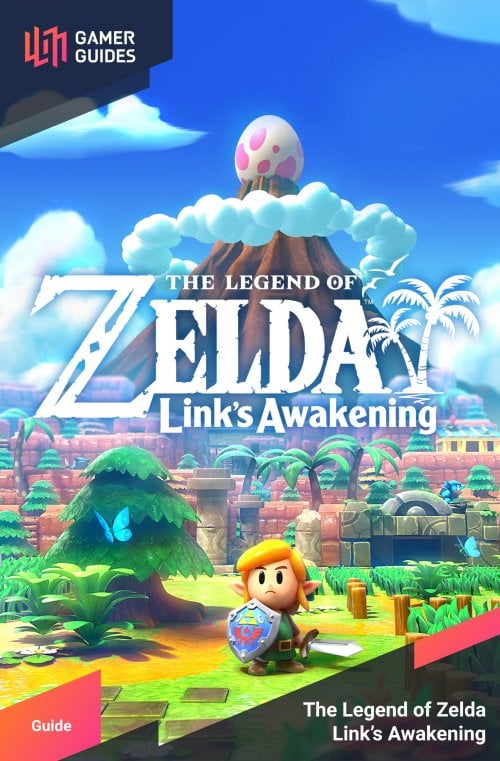 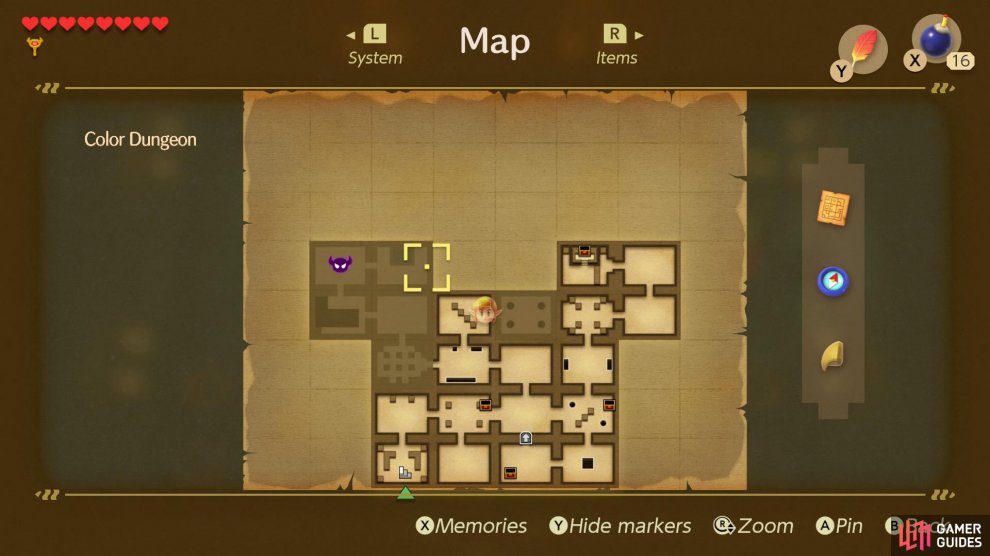 Once you’ve unlocked the ability to dash from the Pegasus Boots you’ll want to dash into the building to top left of where the kids are playing in Mabe Village. Continue sprinting forward until you smash into the bookshelf at the back and a book will fall down, collect it and you’ll be given a code that will open your path to the Color Dungeon. 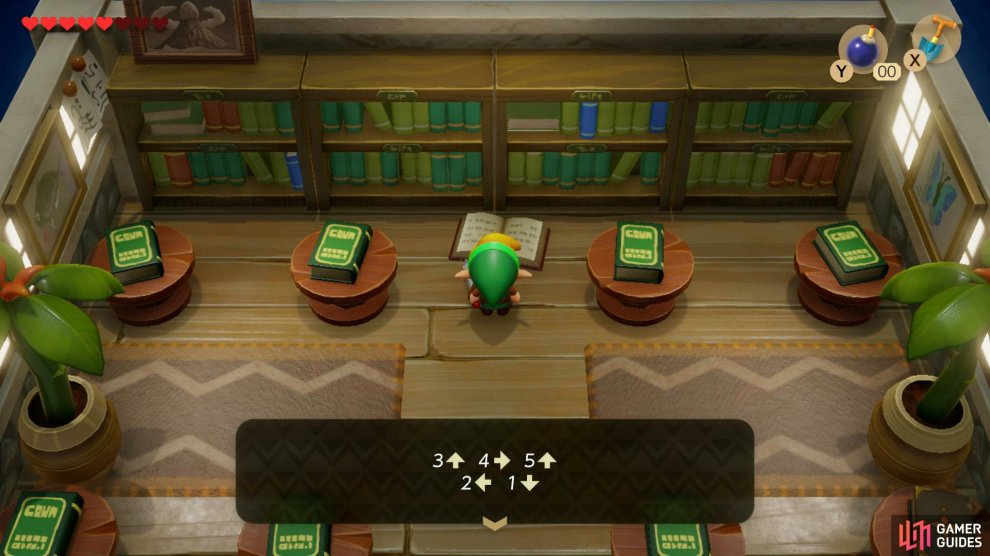 Head over to the Cemetery and make your way towards the bottom right corner and postion the gravestones in the order shown in the picture. If done correctly a staircase will be revealed, proceed down it to take on the Color Dungeon.

After you’ve entered the next room you’ll notice some enemies on different coloured pieces of floor, wait for them to come out of the ground and then quickly attack them.

Now that they’ve been dealt with you’ll want to head into the room to your right through the now open door, interact with the Owl for a clue and hit the balls in the following order to get Chest the Compass to spawn.

After the Compass has been collected, place a bomb against the crumbling wall at the bottom and enter the hidden room to find a bunch of Rupees waiting, now exit and head over to the room on the right and quickly hop across the floor and enter the next room.

In order to defeat the enemies in this room you’ll need to hit them once to cause them to hide in their shell, then pick them up to place them into the hole with the same color. Once done a Chest will spawn with the Stone Beak inside.

Once the Stone Beak has been acquired head through the door ahead and continue into the next room above that, hit the bottom right ball and then the top left twice to get a Small Key to drop. Head through the door on the right and take out the enemies there, now head up to the room above where you’ll face Giant Buzz Blob.

in order to take it out you’ll need to get close and sprinkle Magic Powder over him to cuase him to turn blue allowing you to deal damage. Whilst you’re trying to close the distance you’ll need to keep an eye out for the Lighting attacks that he can do.

Once you’ve defeated the mini-boss head through the door on the left and move the blocks to free your path to the Chest with the Nighmare Key inside.

Locating the Map to the Color Dungeon

With the Nightmare Key acquired head back to the room with the four balls and continue heading down and until you cant no more then go into the room on the left and kill the enemies to open the Chest for a Small Key.

Head up through the door and hop across the floor into the next room where you’ll face the Stone Hinox, in order to defeat him you’ll need to dodge the rocks that are falling down and place bombs in front of him, repeat this a few times to kill him.

Go through the door on the left and take out all the enemies whilst dodging the red pieces of floor, now head to the top left corner and remove the vase to step on the button which will open the doors.

Come back to the room with the two doors and proceed through the left door, inside you’ll see more balls that you’ll need to hit in the following order.

If done correctly the door ahead will open, proceed through and take out all the enemies, hit the Crystal to remove the blocks and head through door by using the Nightmare Key and enter to face the Hardhit Beetle. 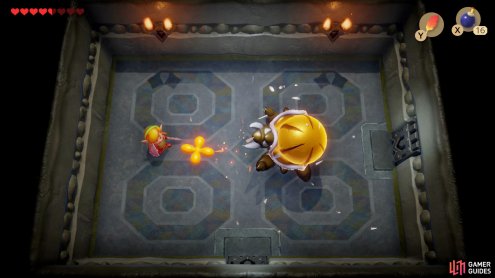 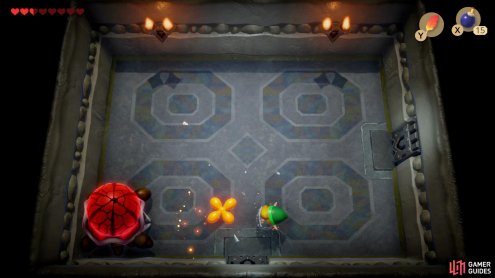 In order to defeat the beetle you’ll need to continue hitting it whilst moving out of the way of its attacks, after you’ve killed it head through the door on the right and speak with the Fairy to gain either a Defense or Offense buff.

For a normal difficulty playthrough you’ll want to pick offense as your buff as defense will be more benficial for a Master Mode playthrough. 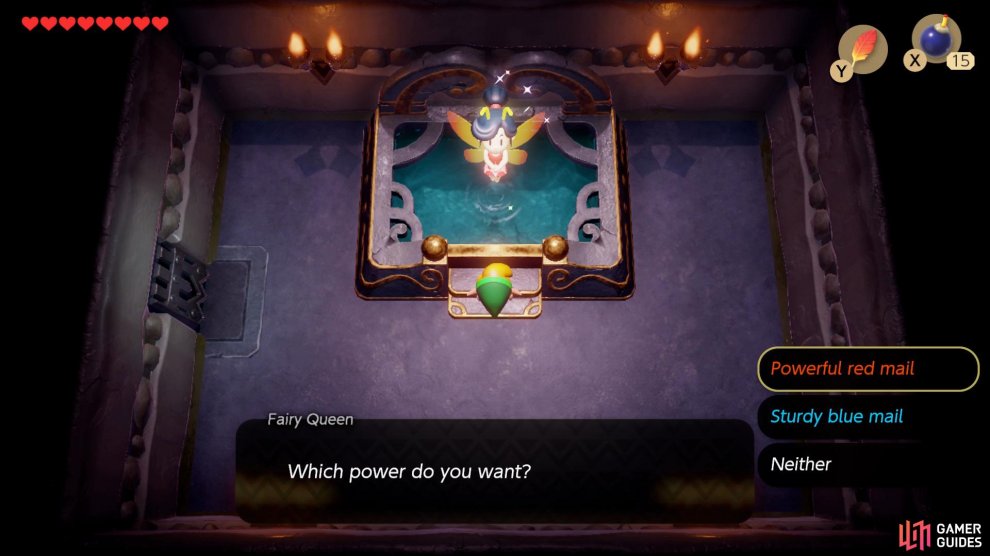