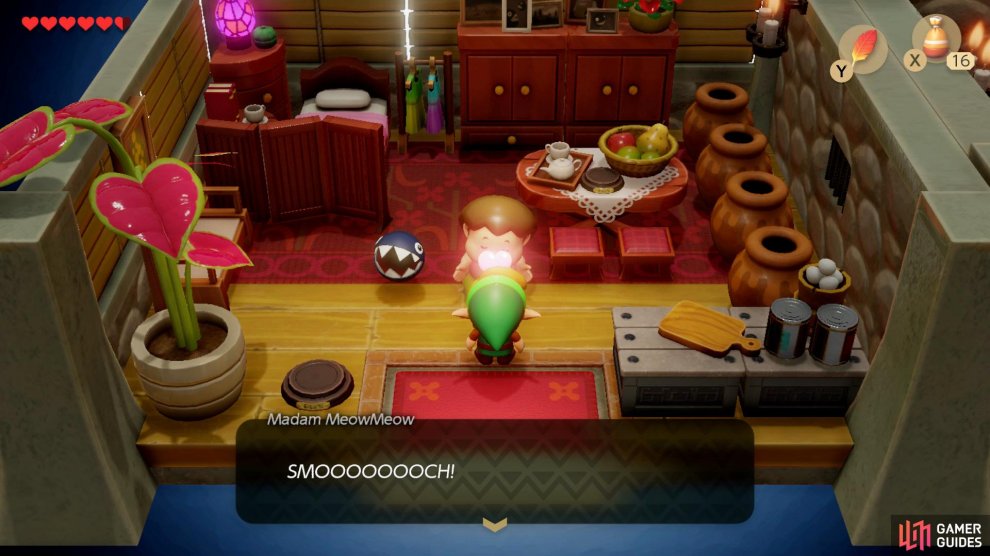 Bringing BowWow back to Madame MeowMeow

Once you've completed Bottle Grotto and collected the Conch Horn, it's time to head back to the Telephone Booth and get some more intel on what to do next.

It's time to return BowBow back to his owner, Madame MeowMeow, but first you've got some things to collect in the Mysterious Forest. From the Cave with the three stones outside, take a little walk south to find another stone in the corner, remove it to find a hidden staircase and head down.

Once you're in the underground area you'll want to throw Magic Powder over the middle section between the two statues to cause a Purple Bat to wake up from its nap, he'll then give you an ability to carry more Magic Powder as punishment.

Exit the underground area and make your way over to the first cave you visited in the Forest, once you've entered, follow the path around and proceed into the room that's covered in stones, position them to allow you to get close to the skulls and pick them up and throw them elsewhere, now collect the Piece of Heart.

Exit the cave and head a little further south to find yourself a Chest surrounded by trees and a stone, simply remove the stone and head in to collect yourself a Secret Seashell. 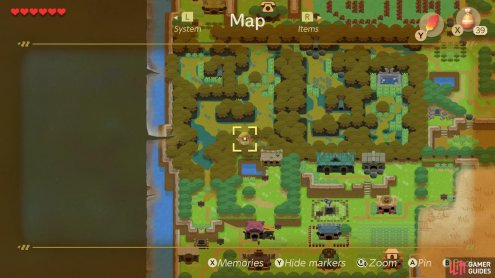 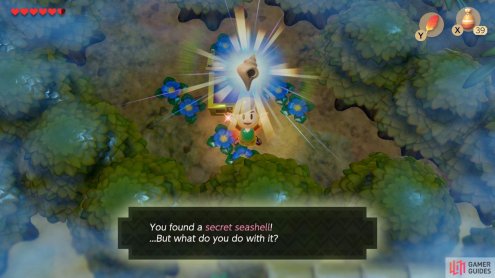 Head out the trees and return to Madame MeowMeow in Mabe Village to return BowWow.

Before proceding to find Richard there's a couple of tasks you'll need to do first, make your way into the store near to Marin's House and purchase yourself a Shovel for 200 Rupees. Now head into Madame MeowMeow's pet house and dig around the room to find yourself a Secret Seashell.

Head back to the store and purchase yourself 10 Bombs, now make your way back into Tail Cave. From the entrance, go north, west, and north once more, use the bomb to break down the crumbling wall where you can collect a Secret Seashell from the Chest inside.

Make your way back to the cave where you collected 50 Rupees, but now you'll want to climb up and remove the stone to allow you to get past, continue walking until you reach the Witch's Hut and take a left to reach some stairs, remove the stone and head to the small grass patch and dig in the center to find another Secret Seashell.

Proceed back down and activate the teleporter by standing on it for a moment, continue south to Pothole Field and walk through the tall grass to reach Richard's Villa. Enter it and speak with him to find out what to do next.

In order to retrieve the Key to Kanalet Castle from Richard you'll need to collect the five Golden Leaves that he lost. Exit the Villa and head right and follow the path up to the castle, once you've reached it take another right to find a Monkey, speak with him and give him the Bananas you got earlier and he'll grab a few friends to build a bridge across for you.

Grab the Stick he dropped and walk across the bridge, continue onwards until you reach a Telephone Booth, destroy the plant to the left to find some stairs leading to the back section of the castle.

Take out the guards patrolling the area and follow the path around until you find a bird relaxing on top of a tree, use a nearby stone to launch at the tree and aggravate the bird causing it to come down, quicly kill it and collect the first Golden Leaf that has dropped down.

Contine following the path until you see several holes scattered around the floor, kill the enemy that keeps popping out of the ground to gain the second Golden Leaf.

Enter the palace and follow the path up and around to kill another two guards which will then drop you the third Golden Leaf, contine around and step on the button at the end of the corridor to open the gates.

Proceed up and walk to the opposite side of the room and head down out of the door, proceed down the stairs and use a bomb on the left statue to cause an enemy to spawn, take him out and the forth Golden Leaf will drop.

Head back up and follow the room around and exit out of the door to the south, now re-enter the building through the door on the right and then use a vase to smash the door open, enter and defeat the guard by dodging his swings and hitting him when the ball gets stuck, upon his death the final Golden Leaf will drop.

With all the leaves acquired, head back to Richard's Villa and deliver them to him, he'll then instruct you to move the statue beside him to reveal a staircase. Walk down it and then proceed to the Chest in the room to get a Secret Seashell.

Use the stairs at the end of the room to return to the surface and chop away at the grass to reveal any sneaky holes, slowly make your way over to the Owl Statue at the back and dig up the ground in front of it to find the Slime Key.

Take the path you came from back and exit the Villa, after exiting take a left and head up to use the key allowing you to gain access to Key Cavern.

Finding the Entrance to the Cavern

Although you've put in the key to the cavern you cannot enter through this way as its blocked, so you'll need to find another route in, but before proceeding straight in there is a few items you may want to collect first.

Head back to the location with the Teleporter and climb the wall again, make your way to the north of the Witch's Hut until you come across a house with blue flowers on the top, speak with Crazy Tracy inside and purchase some Secret Medicine for 42 Rupees.

Now make your way over to the entrance of the palace, then follow the path down to the right until you reach a hill which has the Seashell Mansion on it. Enter it and step on the platform with all the shells that you've collected so far to gain a Piece of Heart.

Exit the Mansion and take a right, cut down the plants to find another Secret Seashell, head south a little and you'll find an entrance to a cave, enter it and place a bomb on the cracked wall and enter the room behind it to take the stairs out to the other side. Push the stones out of your way and exit out to the bottom door.

Dig around the Owl Statue to find a Secret Seashell, go back through the Cave and exit out of the left door into Marth's Bay, then cut down the plant to the right of the Telephone Booth for another Secret Seashell.

Finally, make your back towards Richard's House and you'll see an opening to an area with water, hop across the platforms and enter the Key Cavern. 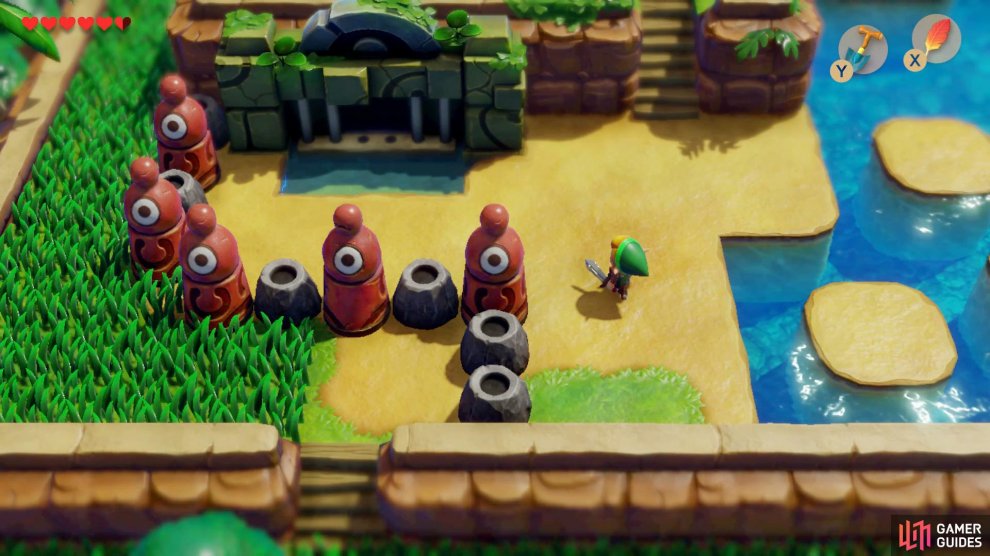