Upon entering the Earth Temple, go to and utilize the nearby Bird Statue. Then proceed to leap across the rock platforms atop the lava - don’t worry, they won’t sink into the lava, so take your time. Once you reach the safe ledge, defeat the Fire Keese and the Red Chuchu. Afterwards, dig around to find an air spurt. Ride it to the ledge, on which you’ll find a Red Rupee inside a chest. Head on over to the western room to speak with a Mogma.

Afterwards, return to the central area and go up the broken staircase. When the lava platform is lowered, get onto it then the other platform when possible. Once the second platform rises, get onto the other side. On this ledge, go to the two opposite sides of the platform and cut the ropes the mechanisms are using to keep the bridge up. Then launch your Beetle to the right of the bridge to find another such mechanism. After the bridge lowers, go to the other side. 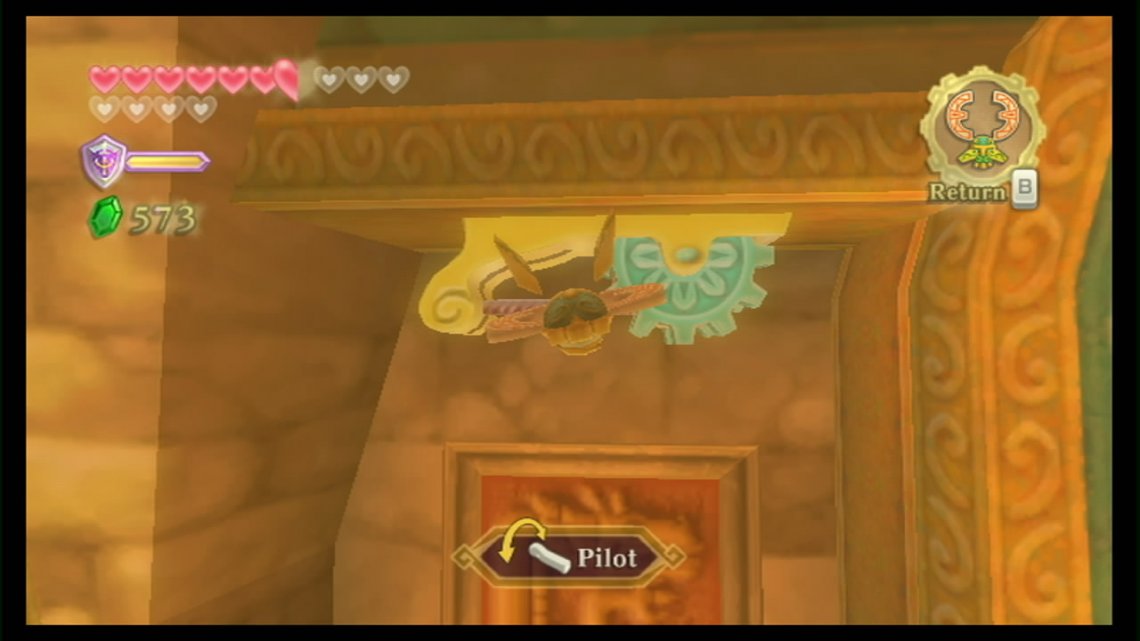 In here, you’ll find a Lizalfos; defeat it. To the north/northeast, you’ll notice a structure absolutely covered with Bomb Flowers. Hit one with your Beetle or Slingshot to destroy it, sending the stone ball over to you. You can use it to cross lava by jumping on it. You can defend yourself atop it and even run over some enemies. Just do not move too much too fast; you’ll fall off into the lava. 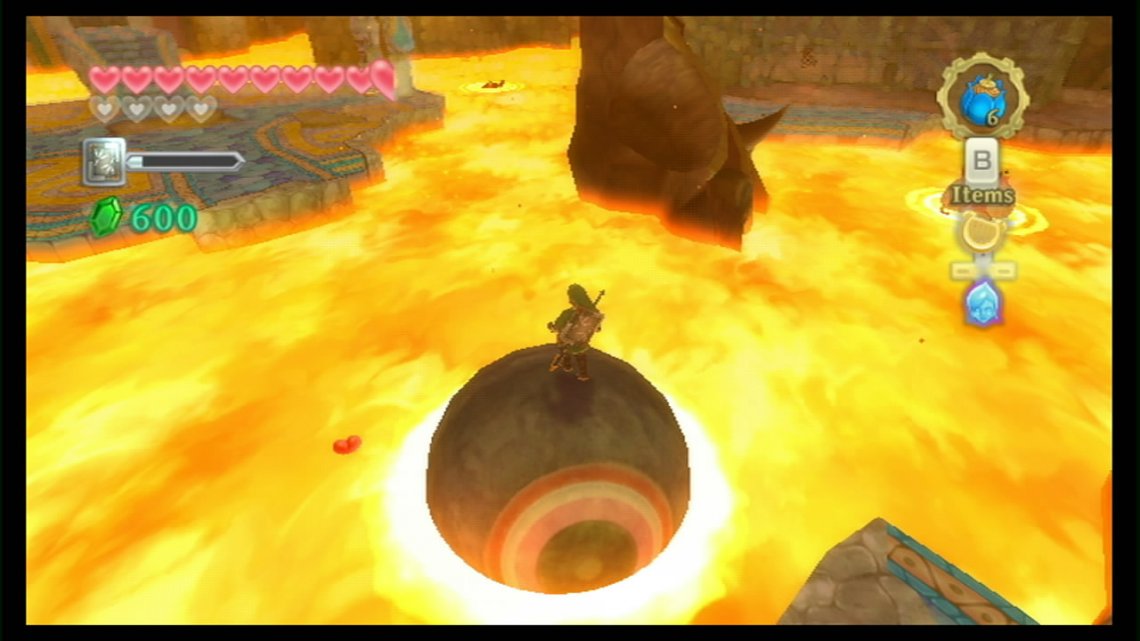 Begin by heading to the southeastern corner of the room via the stone. Here, you’ll find a Mogma, Ledd, who lost his Bomb Bag and wants you to get it for him. Agree to help, then crawl through the tunnel in the gate nearby. Defeat the Bokoblin here, then dig up an air vent. Go to the upper ledge and around to collect Rupees. Afterwards, grab a Bomb Flower and roll it through the tunnel to the rock blockade outside, where it should destroy it. Go back through the tunnel and into the room hidden by the now-gone rock blockade.

In this room, defeat the two Lizalfos; shield bashes are a good technique to rely on. Afterwards, a chest will appear. Open it for the Bomb Bag, then go to the corner of the room for an Amber Relic. Leave the room and speak with Ledd to earn the Bomb Bag for keeps, as well as five Bombs. To get more, pick up a Bomb Flower and press B to store it; store some via the room nearby. After the restocking, use the stone to go to the southwestern corner of the room.

Here, you’ll find another platform whose height changes on whether the lava is rising. As it prepares to rise, throw a Bomb onto it to remove a rock blockade. Get on the platform next time around and open the chest for some random treasure , I think. Take the stone eyeball to the center platform now. There, use the Bird Statue and go around, defeating the Red Chuchus. Afterwards, head up the western broken staircase. Throw a Bomb at the rock to clear the path, then head across to a Lizalfos. Defeat it if you want, then continue west into the next room.

In this room, head across the platforms and defeat the Bokoblins as you go. The Magma Spumes can be annoying, so a throw a Bomb at them should they become a nuisance. On the far end of the room, jump onto the lava platform atop the geyser when possible. Jump to the higher ledge and defeat the Bokoblins, then open up the chest for a Dungeon Map . Go back to the lower area and exit.

Here, return to the central platform and hop onto the stone ball. Roll around the west side of the central platform. Continue to the northbound bridge and roll into the switch (the protrusion) to cause one platform to rise a bit. Also be sure to check the northwestern isle - it has some Rupee-yielding dig areas and a random-treasure treasure chest.

Afterwards, go to the east-central wall of the room. Along this area, you should be able to see a crack in the wall. Throw two Bombs at it to create a hole and a new path. Follow the path for a bit - along the way, be sure to stop at the small room for a Bomb refill. 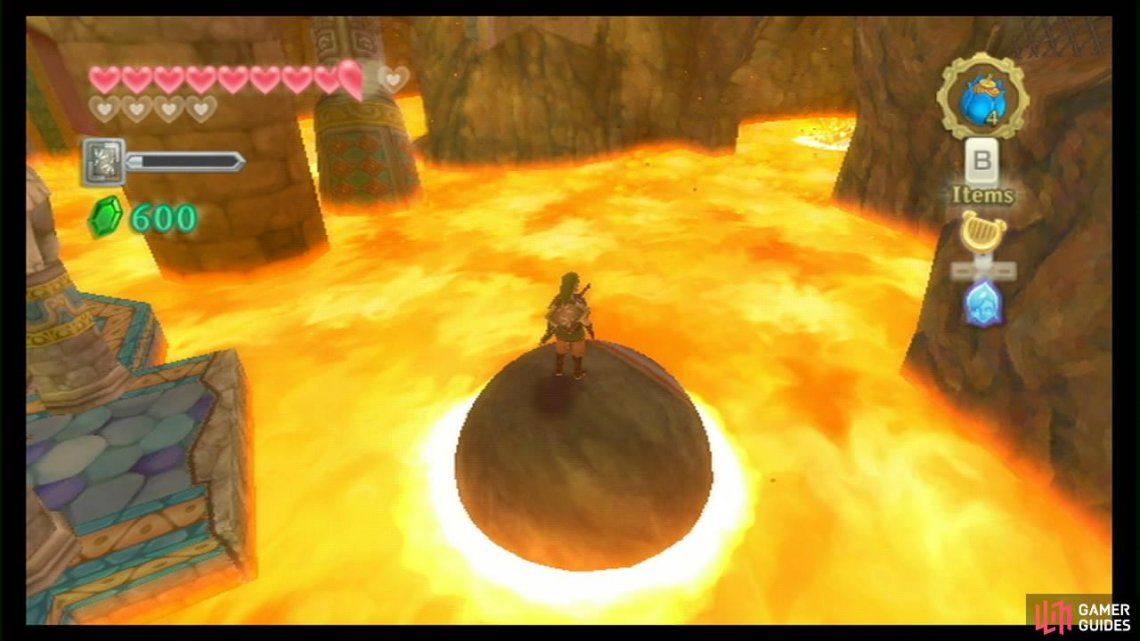 Further along, you’ll be blocked by a large platform. Turn around and look around for a crack in the wall - throw two Bombs at it to create a new path and a fight with a Fire Keese swarm. Continue along the new path to get around the middle platform. Continue forward to the gate. This one has a mechanism similar to the drawbridge from early in the dungeon. Use the Beetle to slice the rope on this side of the gate, then go through the tunnel on your left to reach the opposite side and the other rope.

After the gate rises, go forward to the ledge. Go through the passage, defeating a few Bokoblins along the way, to reach the Bird Statue. Save and return to the stone sphere. Go further ahead, and continue whenever the lava ceases to spurt from the walls. Afterwards, carefully traverse the narrow path to reach the main portion of the room. Bump into the switch on the platform from earlier to finish the bridge properly. Get onto the bridge, use it, and go through the door.

In here, go across the gap to find a steep incline. Hug the left wall as you dash up, going into the alcove when possible. Let your stamina recover and then go to the hill’s peak. Here, go into the nearby tunnel. On the other side, dig around to reveal an air vent. Use it to reach a ledge. Follow this path to find a nice little balcony overlooking the second incline. Withdraw a Bomb and aim above the dirt patch or so - if you’re lucky, you should destroy the rock barricade partway up the incline. 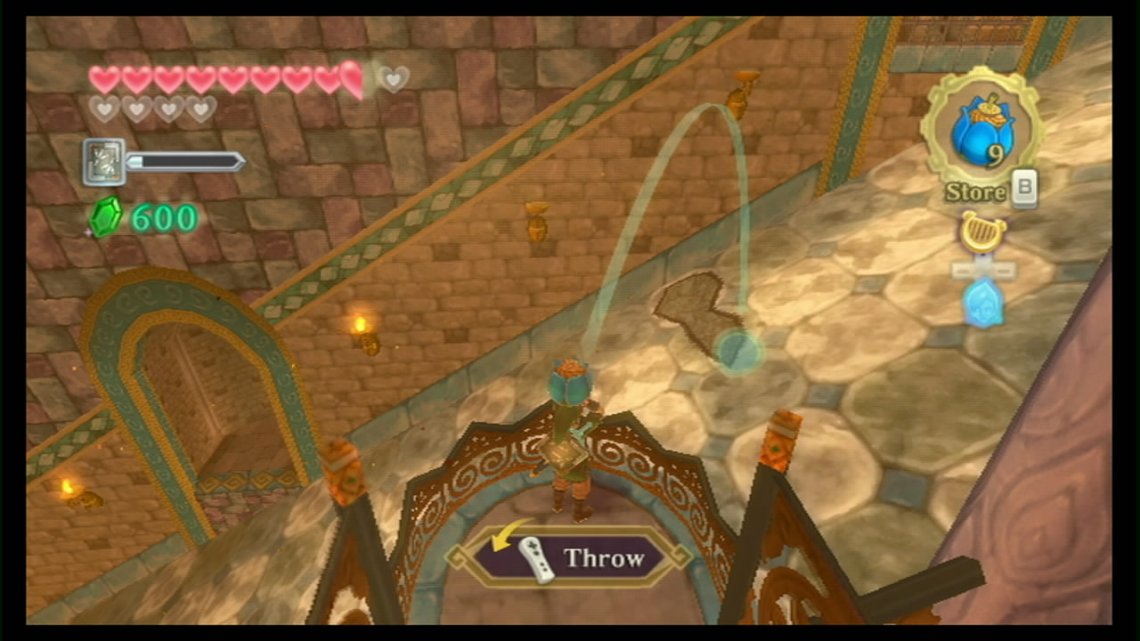 Go back through the tunnel and dash up the incline. Go into the alcove when possible and restore your stamina, then make a mad dash for the top of the incline.

At the top, use the nearby Bird Statue, then go up the nearby winding path. At the top, you’ll find a chest, in which you’ll find the Dragon Sculpture. As you proceed to go back down, a boulder will be launched down the incline after you! If this thing hits you, it is an instant Game Over). Make a mad dash downhill, grabbing Stamina Fruits along the way. If you succeed, you’ll stop the lava flow. Use the Bird Statue again, then proceed to insert the Dragon Sculpture into the door.

In here, continue forward to notice the boulder from earlier rolling along a path of bones. Further along, Fi will converse with you. Nearby, you can restore your hearts and Bombs – for the former, only take what you need. Further ahead, you’ll watch another scene prior to your boss.

Initially, Scaldera will begin by rolling up the incline; stay off to the side to avoid it. Afterwards, make your way to the top of the incline – there is a supply of hearts and Bomb Flowers are there. Be sure to hit the boss with one to send it to the bottom of the hill (the boss does this automatically by going too far uphill).

Upon recovering, the boss will open its mouth and suck in stuff. THROW a Bomb during this time to stun the boss. This also exposes its eye, its weak point, and your target. Hit it a few times. Once Scaldera recovers, dash back uphill.

Scaldera then can shoot several fireballs (just sidestep them), roll back uphill, or do another vacuuming move.

After this, it is rinse and repeat, more or less. The only things worth noting include that Scaldera will eventually go uphill using its legs; let it go uphill, then it’ll roll downhill. Also note the Bomb/heart supplies at the top and bottom of the incline.

After defeating Scaldera, collect the Heart Container and go through doorway atop the incline … after restocking, of course!