Once you arrive, you’ll be notified that the main entrance is locked; however, the mine carts can utilized to find another way in. Save at the Bird Statue nearby, then go upstairs and east to find two Lizalfos. Defeat both of them and continue upstairs to the first mine cart building. Speak with the Goron, as well as sit in a chair for heart healing. Once you learn the controls for a mine cart, get in.

To control a mine cart, you don’t have many options. The B button slows you down, tilting the Wii Remote left/right makes you lean left/right, and flicking the Wii Remote upwards makes you jump. You can get a speed boost by leaning into curves (ie. left curve means left lean). I recommend doing so with every one of them - there have been times I’ve almost fell out of the cart and I was leaning into it. I probably would have fallen out had I not been leaning. 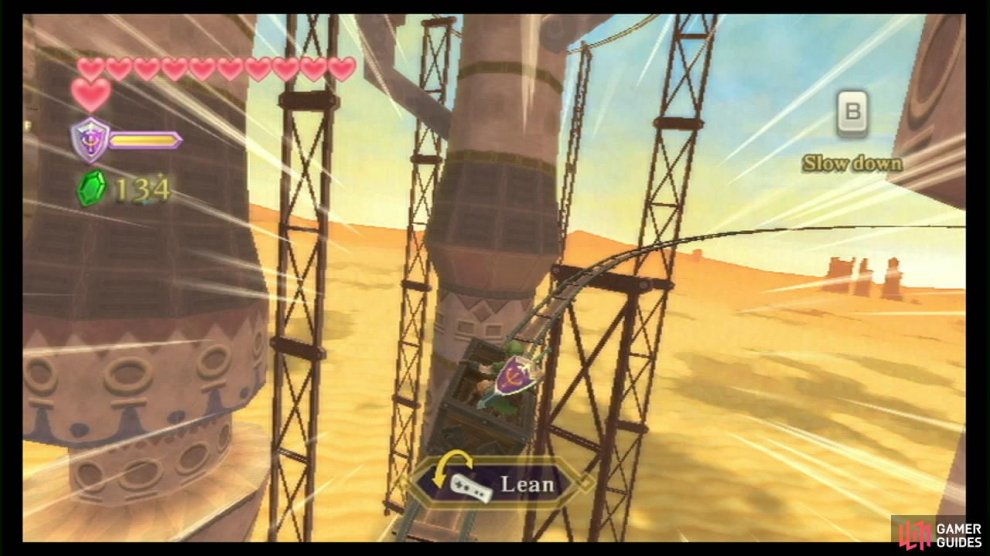 Anyways, ride along the first mine cart track. It is more of a tutorial than anything.

At the end, exit the mine cart and go along the path. In the next room, you will have to slice up a bunch of Arachas. Nearby, you can find a zipline back to the area’s entrance, or take the other exit to the next mine cart track, which is much more complicated.

Throughout this track, you have some forks. One branch of a fork often ends in a dead end (in other words, retry the track). After the first loop, take the right branch (left to the right at the fork). Left right after the tunnel to avoid the dead end, then go across the speedy section and the jump. Later, go left to avoid the dead end, then right after the wide curve to avoid another. The next branch will affect little - the left path is fast, long, and wide; the right path is faster, shorter, and has more tight curves. 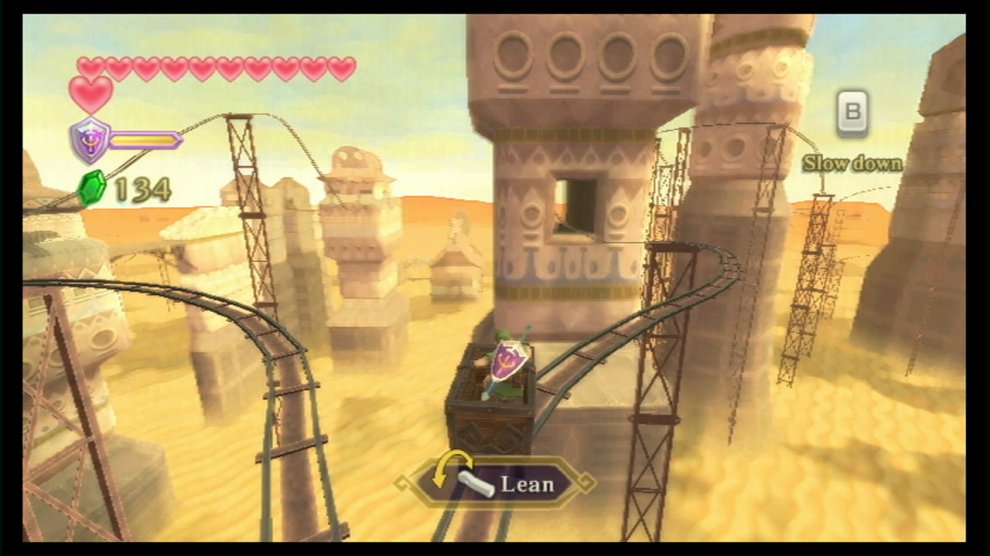 At the end, heal any hearts you may need by sitting down in a chair, then go through the door nearby. In this room, drop down and blow away some sand from the central bulge. Ah, crap. Another one of these.

For the first part of the battle, you’ll initially be fighting the boss’s two pincers. The pincers’ weak points are the eyeballs within. You’ll have to hit the eye at a certain angle when the pincer is open – the angle is pretty easy to guess at, and the game is rather generous with this. If you notice a red eyeball at any point, back off or you’ll be hit with a tail sweep attack. Continue hitting the claws until both are destroyed. Additionally note that the boss may, with one pincer left, use its tail to hit you from above.

After destroying both pincers, the real fight begins. You’ll notice a third eyeball open up where, I guess, the boss’s head is. You can only hit this one with a thrust. After a few hits, the boss will dig into the sand. Now, you’ll be able to note where the boss’s body is. Try to stay away from there, or you’ll be hit with its tail. Use the Gust Bellows to blow away the sand near the boss to eventually bring it aboveground again. Continue to thrust at its eye and later dig it up until it is defeated.

After defeating it, Fi will report that nothing is likely to be found here and the door opens. May as well go through the door. Outside, speak with the robot and you’ll learn that the last place to look at would be the Pirates’ Stronghold. Set sail for it - it is north/northeast of your current location.