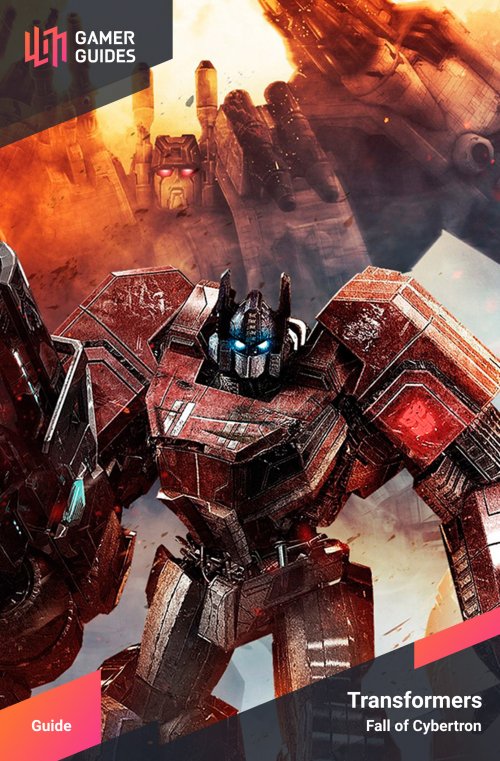 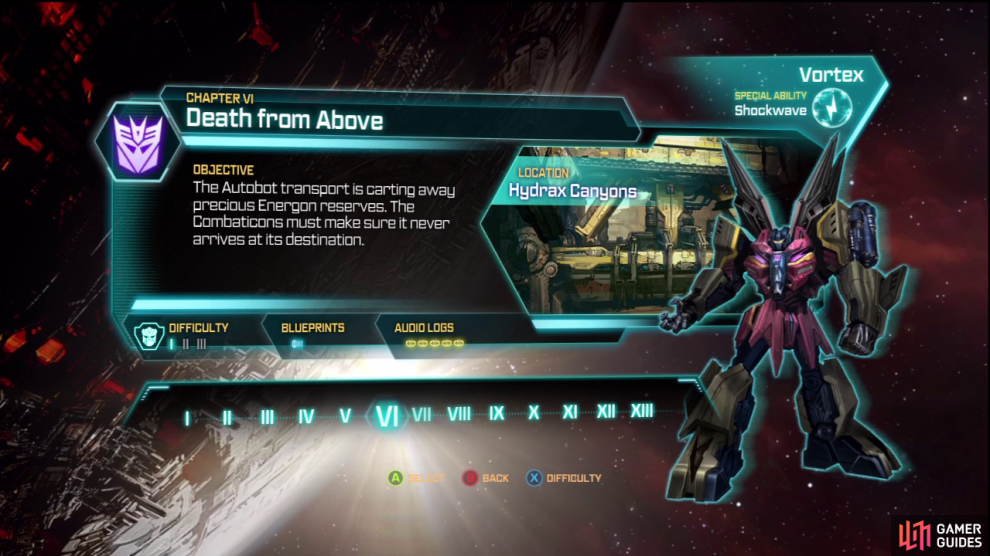 First part of the chapter is a flying stage. Cons vehicle mode is a bit different than Auto’s, since most Cons can fly. Press A to ascend, press B to descend, press Y to switch between vehicle weapons, press LT to accelerate, press RT to fire, and use left analog to steer.

A couple of times Blast Off will be chased by homing mines. Destroy them all with Vortex’ weapons before those mines self-destruct to earn an achievement.

Okay, follow Blast Off thru two tunnels and then go as low as you can before third tunnel. Proceed thru it to find first Audio Log (AL 6-1) . Move up, taking care to avoid lasers as they deal heavy damage. 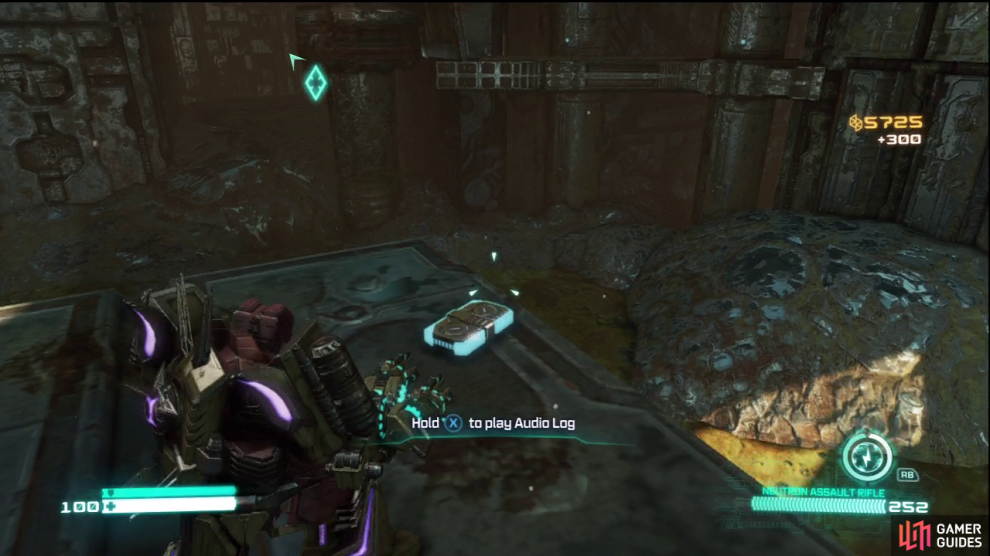 When Blast Off wonders about something, be ready to give chase! He’ll be tracked by a homing mine, so defuse it by blasting it outta the sky. Your path will be obstructed by a blast door, so press Y to switch to bombs and blast the door away. Just before the door is another Audio Log (AL 6-2) . 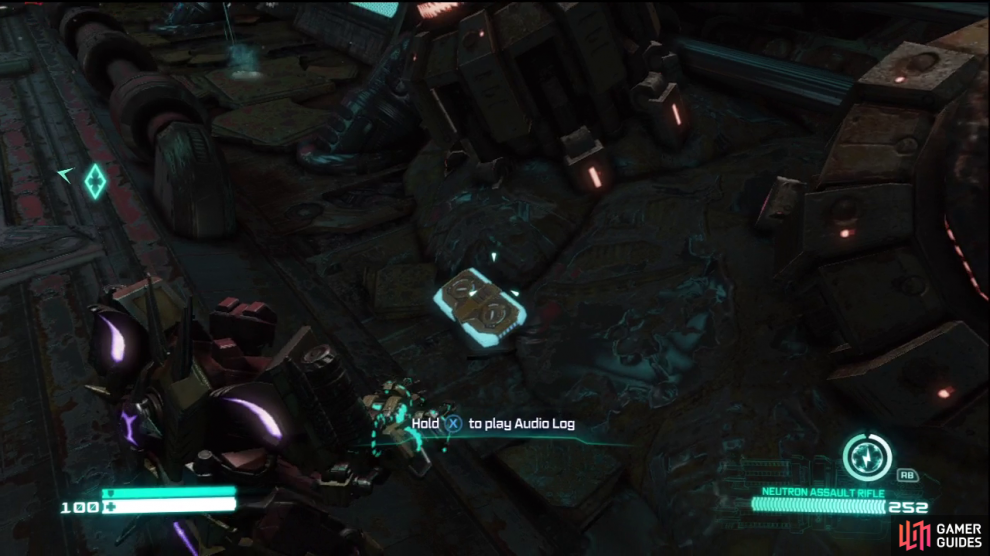 When you pass thru the door, a set of four homing mines will chase Blast Off - pursue and clear them away before they damage your buddy. Then avoid some more lasers, shoot down one homing mine, and descend to new depths (avoid more lazers) and the flying section is briefly over.

Press RB to use Vortex’ shockwave in order to clear Auto’s ambush. Drop down into the abyss and fly near the bottom to locate third Audio Log (AL 6-3). 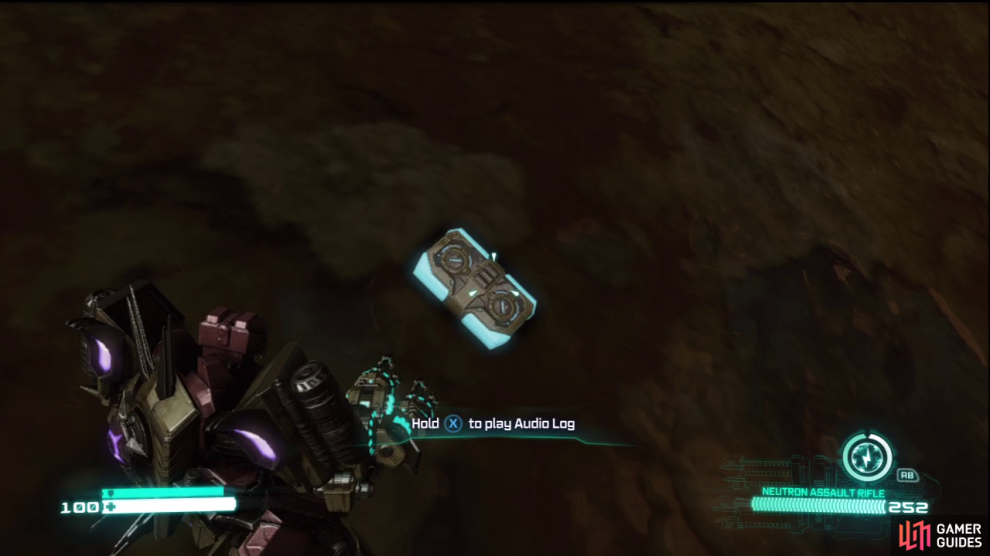 Go back up to where Auto’s ambushed you and proceed along the catwalk (there’s a store as well - grab Nucleon Rifle for sniping enemies) killing any Autos in your way. Just before you enter the bunker, collect the Blueprint (BP 6-1) for Energon Harvester. 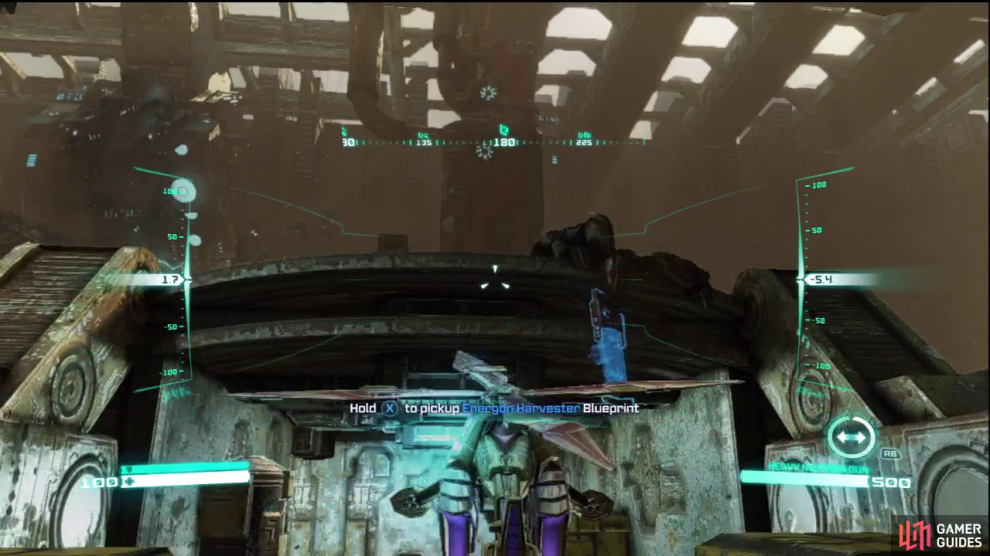 You can easily peek around corners to snipe down enemy soldiers, and beware of energy fun once you get thru the bunker. Kill anything that moves, than move up in a control room of some sort and flip the lever to open the door ahead. An alarm will start blaring, and an assortment of Auto rocketeers and soldiers will swarm the area around the door, but nothing that your Nucleon Rifle can’t sort out.

With everyone dead, proceed to the blast door and plant a Detpak on it to destroy it, then equip a strong weapon (Rocket Cannon) and diminish two shotgunners. Before dashing thru ex-door, turn right to find fourth Audio Log (AL 6-4) and continue thru the area to the store ahead. 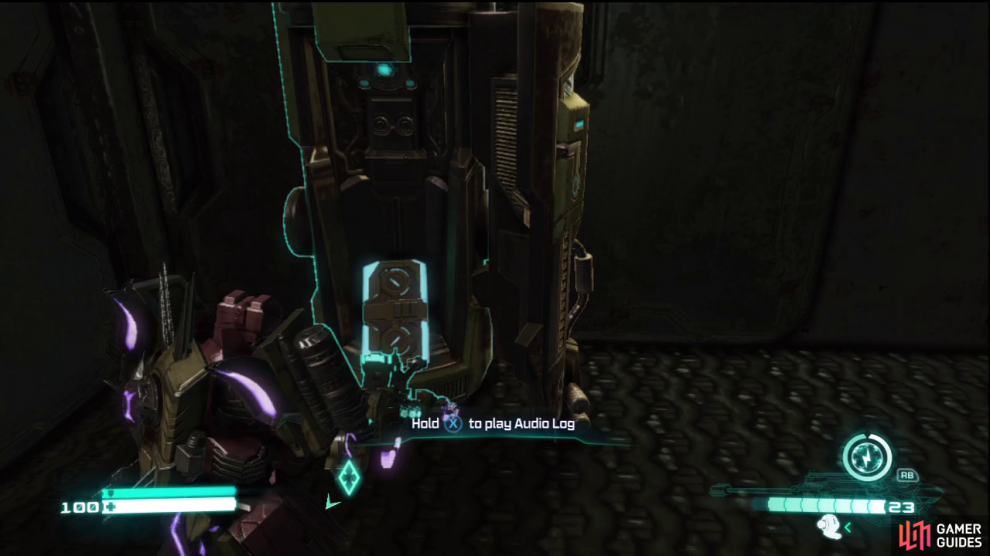 Move up and destroy two more barriers until you meet with Blast Off on the bridge. Attempts to destroy it prove futile, so Vortex must disable the extra shielding. There are three levers you’ll have to flip and first is just a bit ahead, but it’s guarded by several Autos and an Enforcer, an enemy similar to Marauder.

Change into vehicle form and approach the Enforcer in such a way that it can’t shoot you. Clean out any Autos around it, and then shoot the Enforcer with Vortex’s bombs while in vehicle form. When the Enforcer is scrap, more Autos appear for you to dismantle. On a platform across the one where Enforcer was is the first lever, so flip it and fireworks will fly.

Now move up and approach the marker from as high up as you can. This time two Enforcers and a bunch of rocketeers await your arrival. First clear out the rocket dudes, and then bury both Enforcers (I think that until both are dead, Autos will just keep on coming). Move up to the second lever and flip it, but the bridge just won’t go dead yet.

Move up and wait until Blast Off fires some more missiles opening the path for Vortex to get inside. Destroy two energy guns near the entrance and kill all Autos prowling around… or just LT it for the entrance.

Pick up my favorite baby Riot Cannon - smooch. Kill 6 Autos in the room and then step on the elevator to go down. Turn right to restock at the store, then go the other way - don’t forget to collect final Audio Log (AL 6-5) . 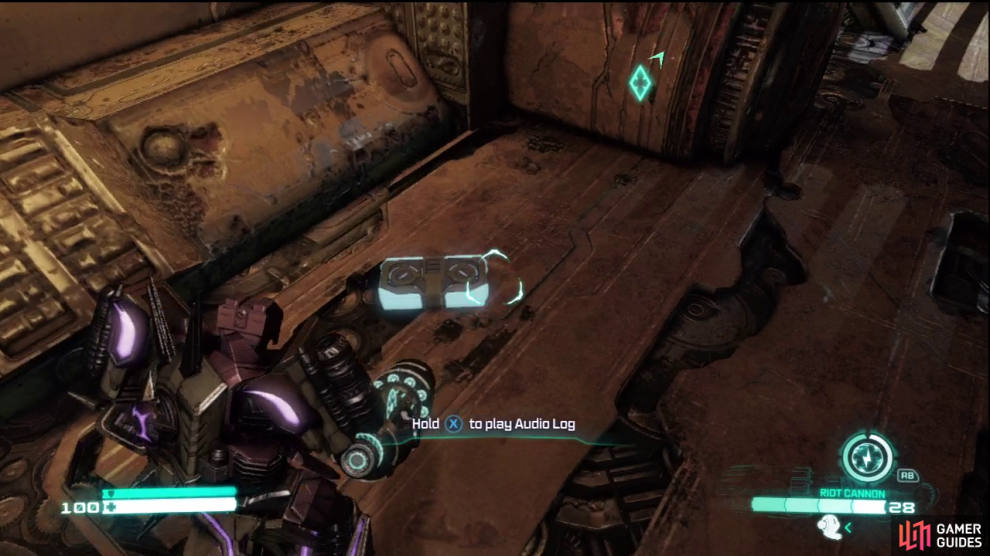 Grab the lever and activate it to lower the walls, then fight off Auto’s assault. Move up to the next lever and flip it - get ready to fight off a titan. Once you damage it enough, a couple of repair drones appear next to the titan and start restoring his health. Blast these drones and continue damaging the titan. More drones may appear, but just make sure they meet the same fate. Eventually titan is destroyed, as well as final bridge support.

Now Vortex must make it out before the bridge’s collapse! Do so to end this chapter.