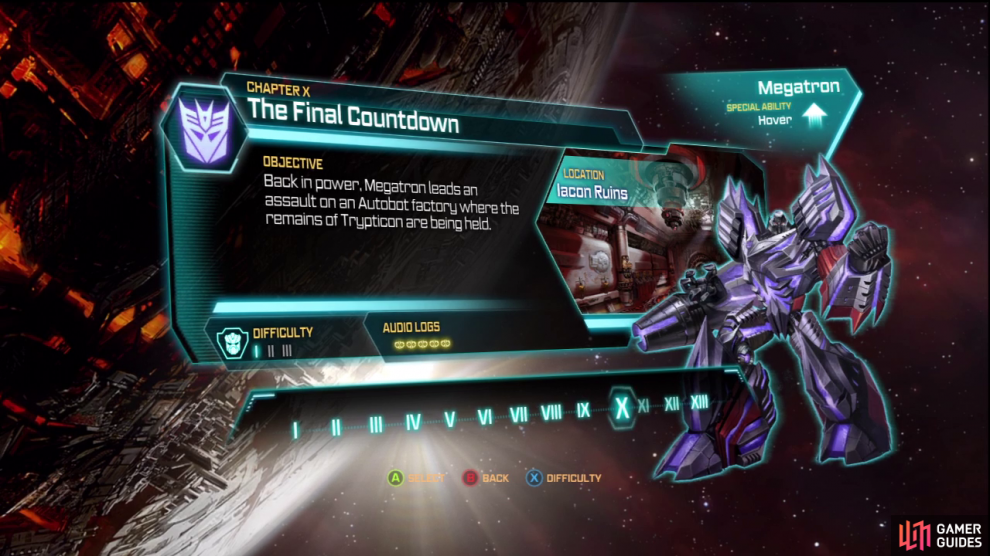 Check the store if you need upgrades and dismantle five Autobuggies in next area, then move up to the corner and hover jump to next area. Clear all Autos around the corner, but don't enter the door just yet. Jump on catwalks to locate first Audio Log (AL 10-1) . 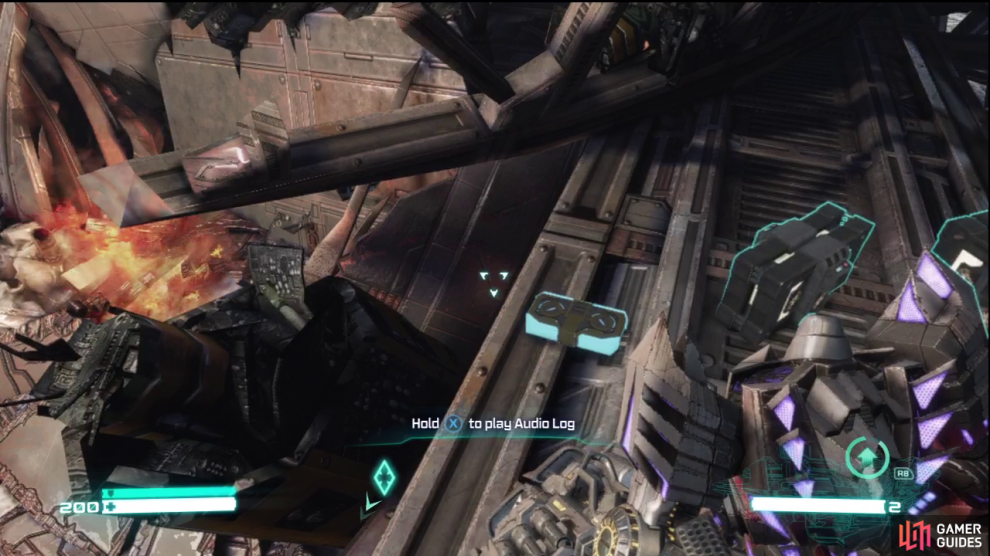 Move up to next area to kill more Autos, but beware of energy gun as it takes a bit to destroy. Go to the far corner in this area to locate another Audio Log (AL 10-2) . Carry on to the bunker with Scatter Blaster inside and Soundwave will open the nearby blast door. 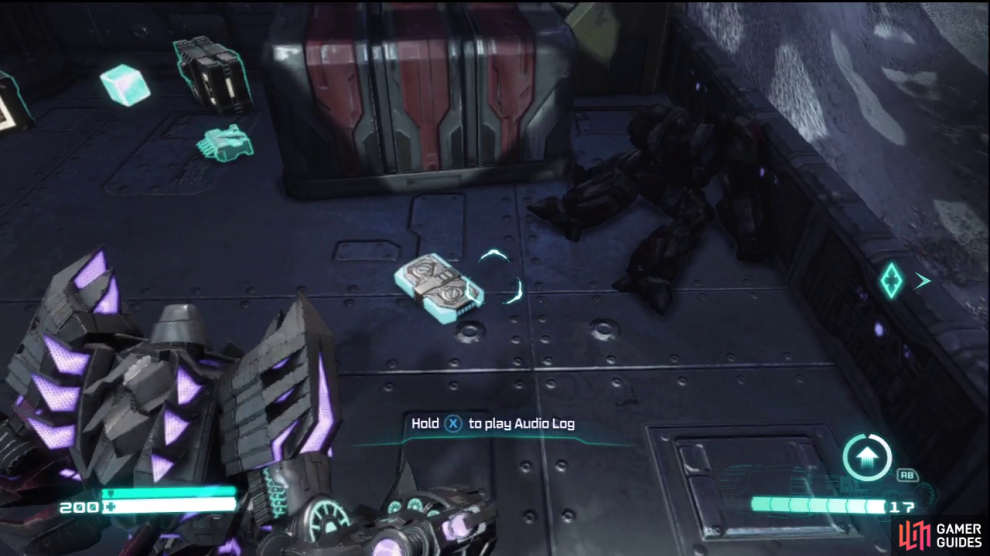 Move up, demolish any Autos and reach the control room with a bunch of Cons. Carry on (need the nearby store for anything?) and Soundwave will open the bridge on the far side. Before crossing it, try to destroy as many Autos as you can on other side, reason being deployed Enforcer in far corner. For Enforcer I suggest changing into vehicle form and blasting it with some Mega-Concussion Cannon rounds.

To get a cheevo, you need to kill five Autos at once from Megatron's hoverslam attack - quite hard to achieve, I'm afraid to say. The Harder They Die

Move up (careful of two shotgunners), and check the store for anything you may need. In the area ahead is another Enforcer, supported by a bunch of Autobuggies. Smash them all, then Bruticus arrives to pave the way for Megatron!

Move up to enter Iacon facility (there's another store), turn the corner and laugh at panicky Auto trying to get thru the door. Kill him and the door, then take care of more Autos in next area. Enter the building in middle of the area and move up the floors to reach the bridge on top.

Snip the wings of several snipers and move up for a scene between Megatron and Prime, after which you're immediately stormed by four shotgunners in a nice straight line. Drop off ledge to the left to collect next Audio Log (AL 10-3) . Continue to plow thru Auto lines, thru the next door past the store and face off against more Autos in next area, though this time some Autojets spice up the enemy lines. 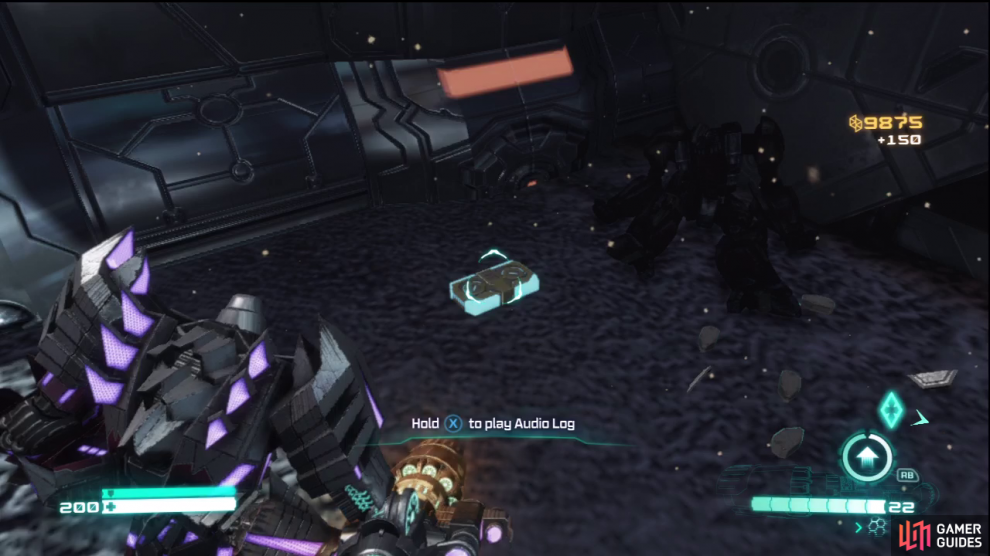 Move across the catwalks into a large pipe - before you drop off into next battle area, try to snipe down as many Autos as possible and also take care of one of the turrets close to the exit from the area - use Megatron's hover to get around security gates (they temporarily block your RB ability if you get caught). When you get near the exit, another turret will appear to the left of it.

Flip the lever and say hi to Autos in next room - after you fight them off, a titan appears, but now you're so souped up it's like fighting a little Auto. There are some barred windows on side of the room, and you can spot an Audio Log on the other side... there's an opening in the ceiling you can hover jump to in order to reach Audio Log (AL 10-4). 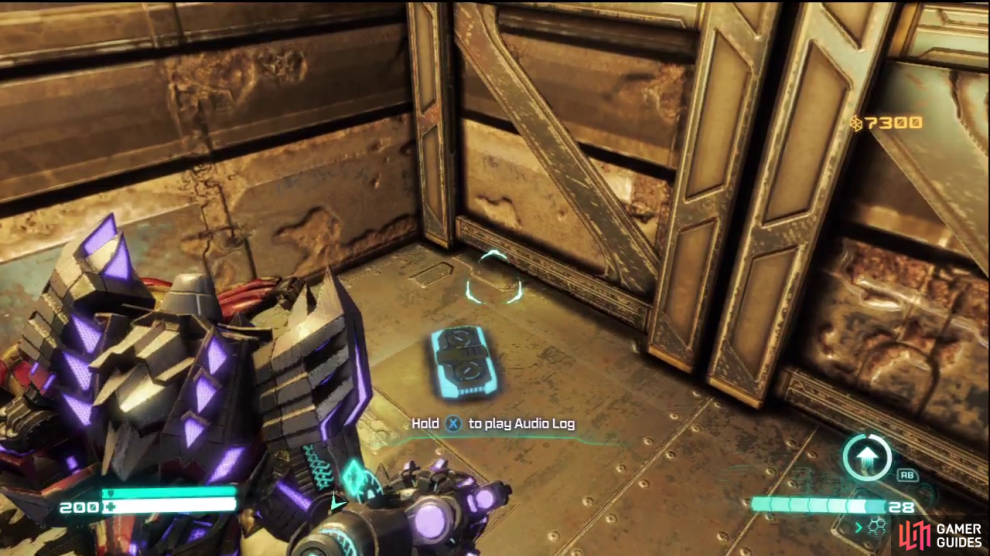 Hop on the elevator and in next area gain control of upper catwalks ASAP to gain supremacy over assaulting Autos, and there will a lot of them. In next room you will gain a visual on Trypticon's leg stabilizers - shoot the batteries (6 in total) around them to move forward. But before that there's a horde of Autos to dismantle.

Move up to locate torso unit of the giant Con, and wait for Laserbeak to slice the door, then melee or shoot it open. Inside collect last Audio Log (AL 10-5) and flip the lever to free the torso. Move up thru next Auto wave (includes snipers) and pass the store to reach another elevator. 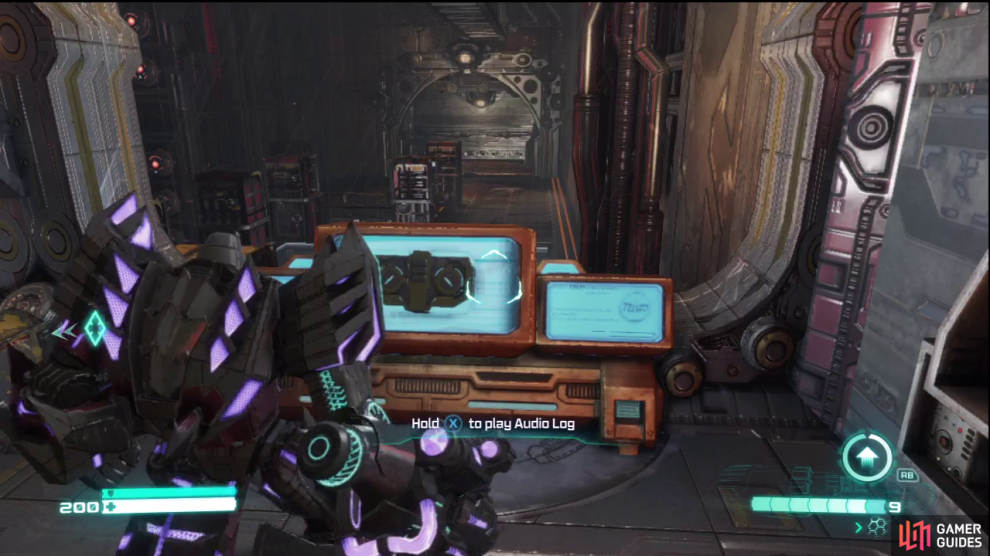 This is the final area of this chapter, and takes a while to complete. While shooting snipers outta the air, disintegrate six batteries scattered over the area and Soundwave will arrive. He'll try to bring Trypticon back online, and you have to protect him during the countdown on top of the screen. Enemies include shotgunners, rocketeers and snipers - keep killing them to eventually complete the chapter. Also, for your perusal here's the video showing all collectables of this chapter, just in case the directions provided aren't enough.