So, you start off on an island and you must infiltrate the rebel camp. If you look through Aveline’s selection of weapons, you will notice she has access to dual pistols, a macheté, hidden blades and sleep and berserk darts. Not a bad arsenal really!

The first part requires you to do some climbing up a cliff face. Head forward, climb over the wall and run to the large structure ahead. Go up the ramp and follow the walkway to the end where you can then jump and swing from the beam over to the other side. Use the wooden beams on the wall ahead to work your way over to the left until you cannot go any further. Do a jump back to get onto the next section of wall when you’re prompted. This can be done by holding R2 and pressing X.

Climb up and then jump on the large platform and then over to the next walkway ahead. Run to the end and jump on the swinging beam. Weeeeeee, that will never get old. After some more climbing and swinging, you will see two guards ahead. Time for some mass murder, yay!

Equip your hidden blades, dash over to them and gut them through the back. Silly fools were too distracted to see you coming. Aveline will speak to the prisoner to get more information on Patience. 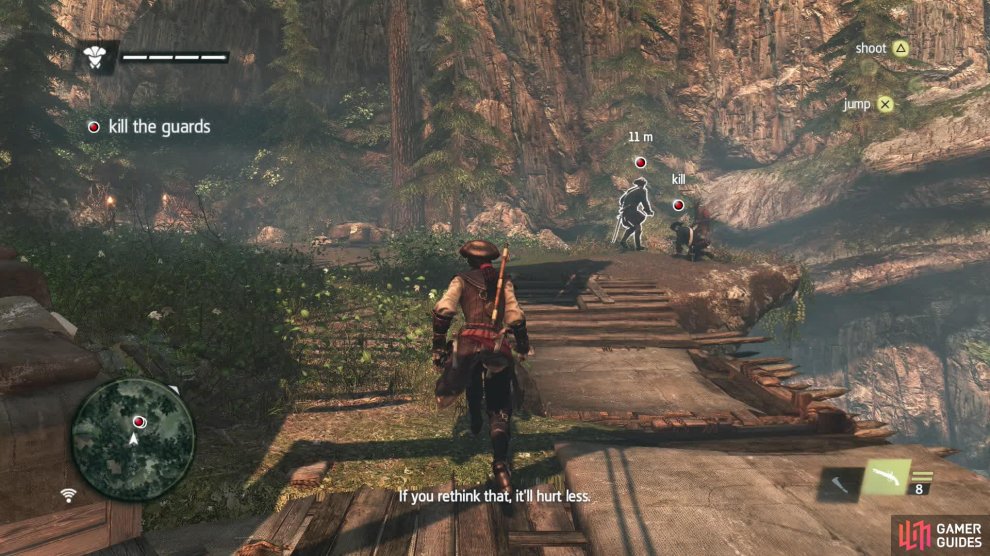 More climbing! Run forward and climb up the enormous tree trunk to reach a plateau where you can look down into the plantation. Tag as many guards as you can with Eagle Vision so you know where they are. Hoist yourself up onto the fallen tree near the cliff edge and walk to the end. There’s a handily placed hay cart below so swan dive into it.

The prisoners are straight ahead, near the alarm bell, watched over by a couple of guards. Sneak around to the back of the guards then double assassinate them with the hidden blades. If that fails, shoot them with your pistols and then fight off any other guards that become alerted. There aren’t too many and they aren’t too difficult either. Once they’re dead, talk to the prisoners.

After the scene, two green markers will appear on your map, showing where the slaves are held captive. Run over to the right marker first. The slaves can be found to the north of the alarm bell, guarded by two brutes. There are also a few patrolling guards around so you may want to take those out first. Use your pistols a lot here or shoot a berserk dart at one of the brutes. Those guys really hurt their friends when in berserk mode. It’s also amusing to watch them hack their mates to pieces. 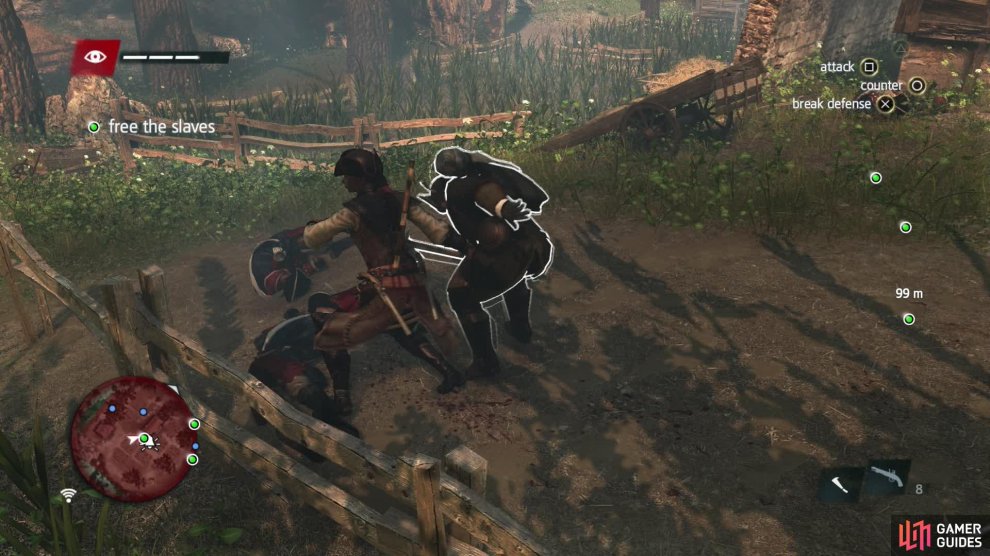 The second marker has quite a few more guards near it. There are gunners here too so you must be a bit more cautious in your approach. You will no doubt notice the four guards stationed at the entrance to the camp, making it impassable. Luckily, there is a fallen tree to the left of the entrance that leads up into the camp as well. Run over there or the guards at the entrance will notice.

Climb through the broken fence panel and dive into the pile of hay before you’re spotted. There is a guard patrolling nearby so whistle him over and drag him into the hay with you. No, not like that, ewww! Now, run to the bushes ahead near to the two guards stood by another entrance. Watch for the patrolling brutes and then move once they’re past you into the bushes round the side of the house on the right.

Enter Eagle Vision and you shall see the prisoners in the yard here, near to a guard stood by a hay cart. Run around the back of him and jump in the cart. Pull him in when no one is looking and then when there are no more patrolling guards, run out and kill the guard stood by his lonesome. Rescue the prisoners once he’s dead. 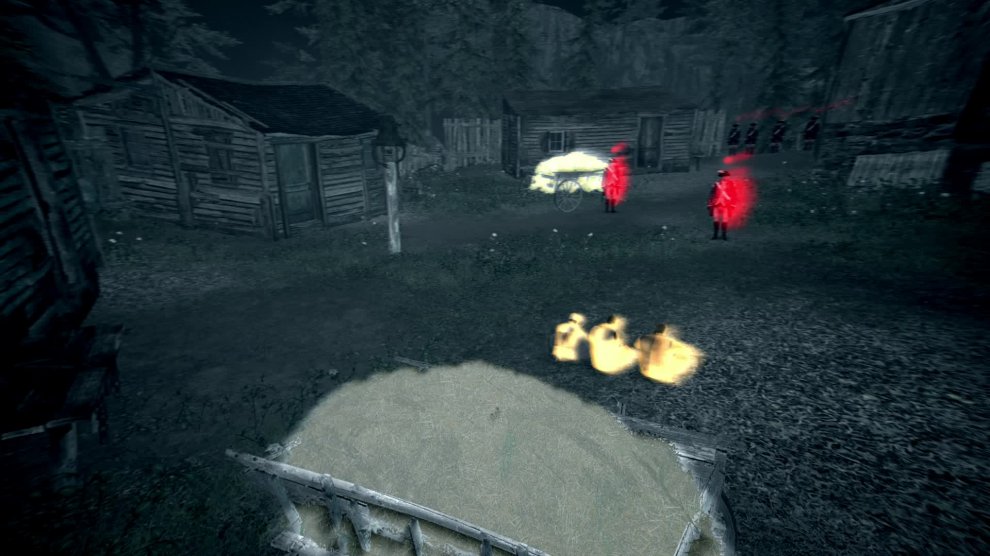 A new objective. Okay, let’s carry on forward. Run through the sugar canes, jump the fence and then duck into the bushes. There are four guards in front of you; two stood still and two patrolling. Move to the bushes behind the closest guard who is still and whistle him over then murder him. Watch for the patrolling guards to move off and then kill the other stationary guard. Hidden blade time! Double assassinate them as they move back near you again.

After removing all those guards, run over to the green circle and you’ll notice a guard on his own. This is the captain. Chase mode begins with the captain blowing up the bridge but just leap across it and carry on running. Carry on through the stone arch and across the water. Stop blowing stuff up, dammit! There is another way through to the right, through a broken fence panel. 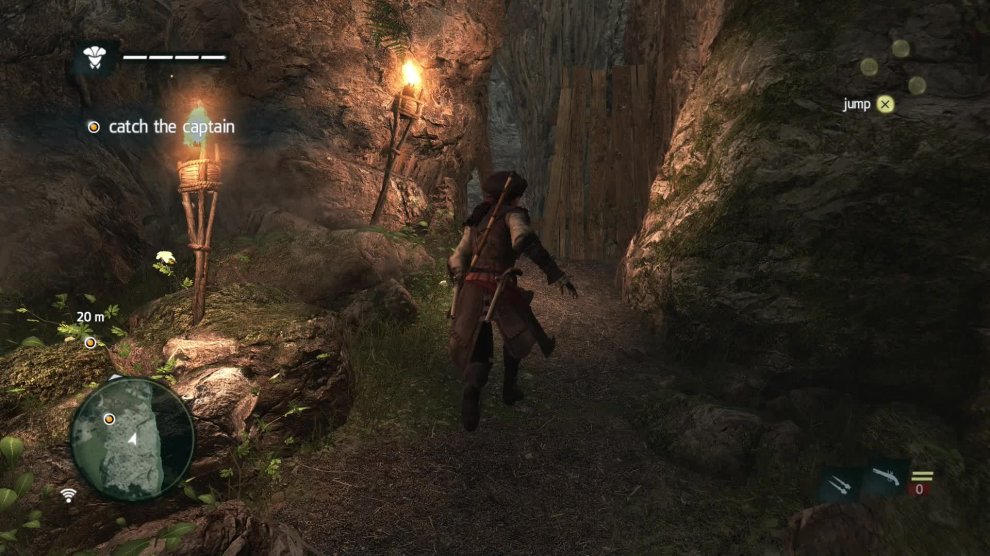 Chase him round the cliffs and just keep leaping over chasms. Finally, after climbing a log he’ll stop and fight you. Counter his attack and then pummel his ass so he falls down. A cutscene will follow.

Get to the fort

Walk to the edge of the tree branch and swan dive into the water below. Swim to the other side and climb up the large tree in front of you. Use this to jump from branch to branch where the green light is for the final cutscene.